Below is a written interview I did for a travel website called TraveLinkSites, which now no longer seems to exist. But I had the text and pics saved in a Word doc, so I've pasted it in below. 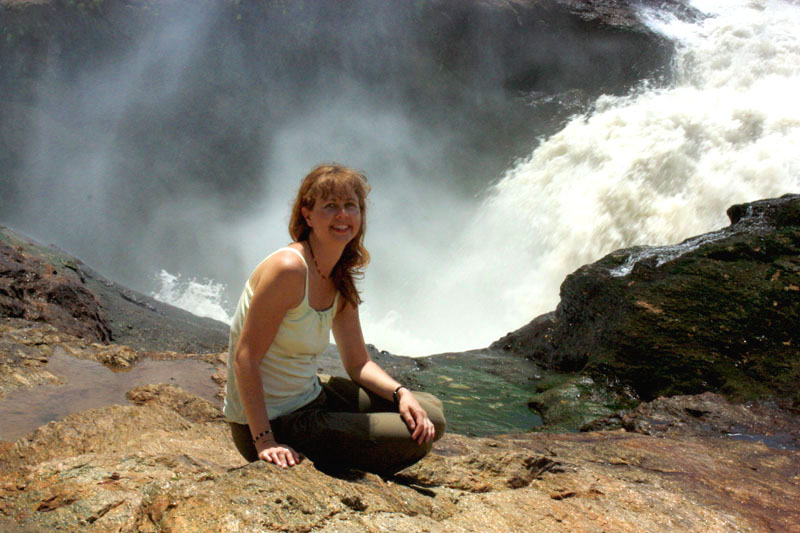 Well, I get people to remember how to pronounce my name – Shara – with the phrase, “share a beer.” That introduction probably already tells you a lot about me.

My website is an outgrowth of my original mail-list … people signed up to the list and I sent dispatches from the road as emails – literally, letters to home. Though I’ve now established a group of websites to make posts on, the nature of them hasn’t changed.

In truth, the location of Uganda was incidental to what I wanted to do on this trip:  work with chimpanzees. I researched available opportunities for this kind of volunteer work  in Africa, and the Uganda Wildlife Education Centre was the most affordable option, as I’m a person of limited means. Once I started researching what else I should do in the country while I’m there, I was overwhelmed at the wildlife opportunities and the landscape descriptions. It is, after all, known as “the pearl of Africa.” 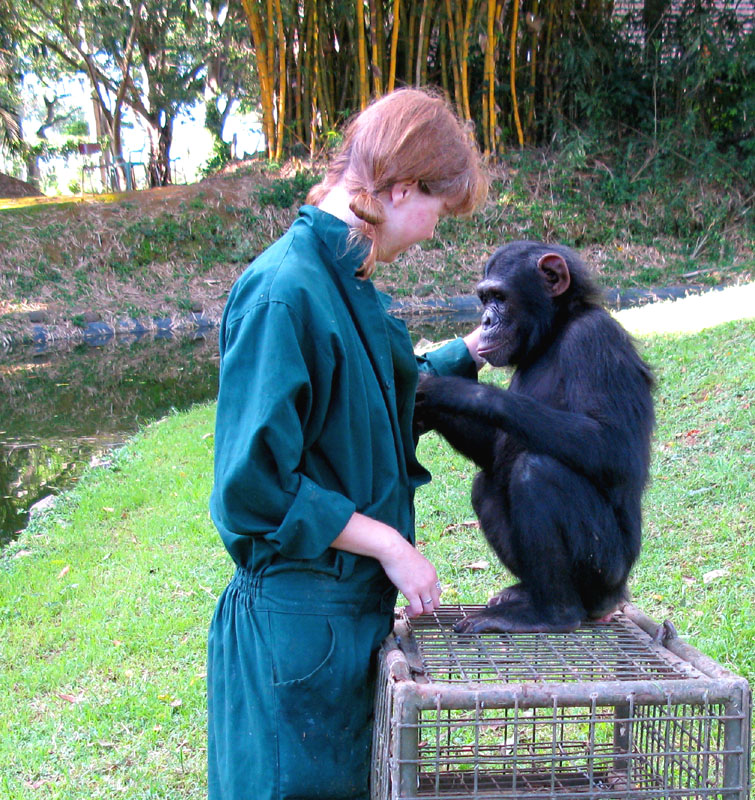 I spent my first month there working as a volunteer at the UWEC in the chimp house, and I lived in a flat on the UWEC grounds, so I was immediately positioned in local life, made friends quickly, had to shop for myself, saw what conditions existed behind the scenes. My first impression, in all honesty, was that the place was a little more Third World than I anticipated, or at least I didn’t understand fully until then what that moniker really implied for the state of a country in terms of technology, infrastructure, product availability, the standards of education and the education level of the general population, etc. At the same time, I was humbled by how friendly and helpful people were to me everywhere I went, and everywhere was jungle – I loved it.

Perhaps ironically, considering it’s a Third World country, it’s really not that cheap to be a tourist in Uganda.  If you can live as a local, then great, you can definitely stretch a dollar far.  But Uganda as a burgeoning tourist destination hasn’t yet realized that not all tourists are filthy rich.  Most hotels are ridiculously over-priced (one place somewhat worthy of the price was the Mweya Safari Lodge in Queen Elizabeth National Park), and then there are a half handful of dirt-cheap hostels, but little exists in the private-room budget range, which is typically where I prefer to reside.  Food and drink are cheap as long as you stay out of the overly touristy restaurants. Public transport in buses and mini-van taxis is incredibly cheap, but it’s because they pack in more people than a clown car. That’s not hyperbole. Local transport by boda boda (motorcycle taxi) is reasonable, but make sure you ask a local how much it should cost between destinations before striking a price with a driver. Private vehicle hire is unfortunately (and for me, prohibitively) expensive.

Prices are so high for entry to national parks and for trekking opportunities, that the only Ugandans who have seen their own national treasures are tour guides or the very wealthy … a tiny minority. Particularly the gorilla trekking … USD$500 for a permit alone [now gone up to $700 since I first wrote this] …  For some perspective, one of my co-workers, an intern, at the UWEC pays USD$60 per month in rent, and sometimes has to forego eating dinner and walk 45 minutes to/from work to scrape up for that rent.  The $500 was a hardship for me, but I live in a country where I have the freedom to rack up unbridled amounts of credit card debt at the ATM machine. (And to be sure, it was totally worth it.)

Outdoor markets are cheap for things like clothing, but again ask a local what you should pay or else you will be offered the “mzungu” price at substantial mark-up.

If you like mushy food, Uganda is your country. Cooked, mashed banana and cooked, mashed cassava are the primary staples, along with other cooked, mashed vegetables, and typically a meat in tasty broth is spooned on top. I had to adjust to the mush.  Chicken – fried or baked – and chips are a mainstay of street vendors, as well as chapattis. Mobile vendors (who come up to bus/taxi windows) seem to favour kabobs of goat meat. Fortunately, Uganda has a pretty good selection of beer, so I was never in danger of starving. Beer is food in my book. My favourite beer was Nile Special.

I know this question refers to festivals or holidays, or places of national or regional interest, maybe a type of dancing or drinking, but I’ll tell you something different. What I got the biggest kick out of, which I considered a marvellous expression of the difference between my culture and theirs, was asking about bride prices and how much I would cost. People always laughed at my fascination, and for the record, I never got the same answer twice. Conversely, most of them were astounded to learn that you could marry a woman in America for nothing. The point is that often the best cultural activity is learning about it through personal conversation. In line with that, the other incredibly enlightening experience I had was couchsurfing at Lake Bunyoni. There was no electricity, so we chatted around a campfire each night. Those conversations were priceless. Couchsurfing is always an excellent venture, but its value rises proportionately as the gap between your cultures widens. 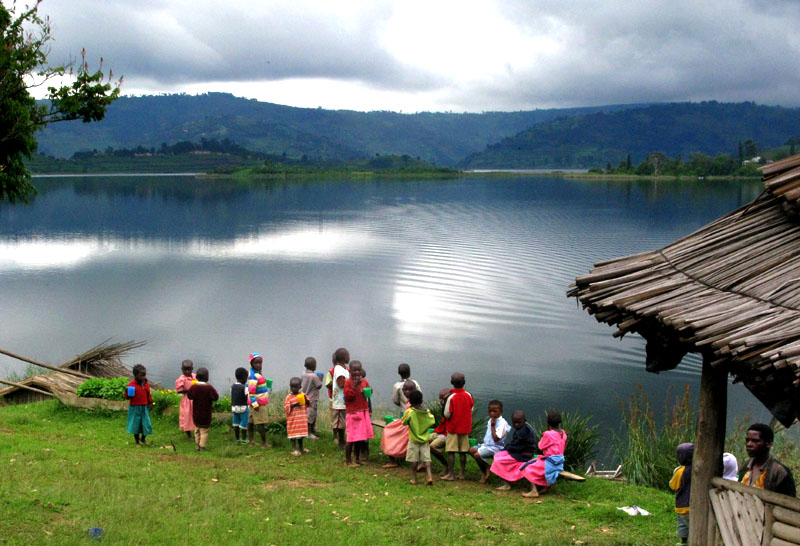 My least favourite thing about travelling in Uganda was having to travel. Ha. No, I’m being facetious, but the buses and taxis can sometimes be a hell of a trial, especially for a claustrophobic person such as myself. And you need an iron bladder for long distance public transport. I literally refrained from eating and drinking on days of long transport.

My favourite thing about travelling the country was very simply seeing the beauty of the landscape as well as the glimpse at life so vastly different from my own … the mud huts with thatched roofs, the herds of cows with impressive horns being shepherded along the road, the colourful clothing, the roadside vendors and banana-laden bicyclists, etc. 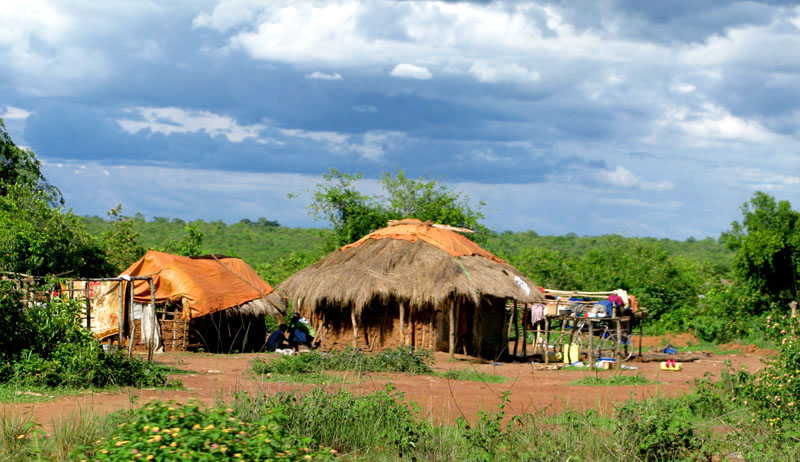 Travelling through the national parks is fantastic – the wildlife is very abundant; you’ll see tons of animals at close range. Queen Elizabeth National Park and Murchison Falls were the only places where I splurged on a private driver, and I believe it was worth it not to be crammed into a safari vehicle with a group of strangers all vying for the same photo ops. The reason the top of this elephant is cut off is because we were so close to her, she wouldn’t fit inside my lens. 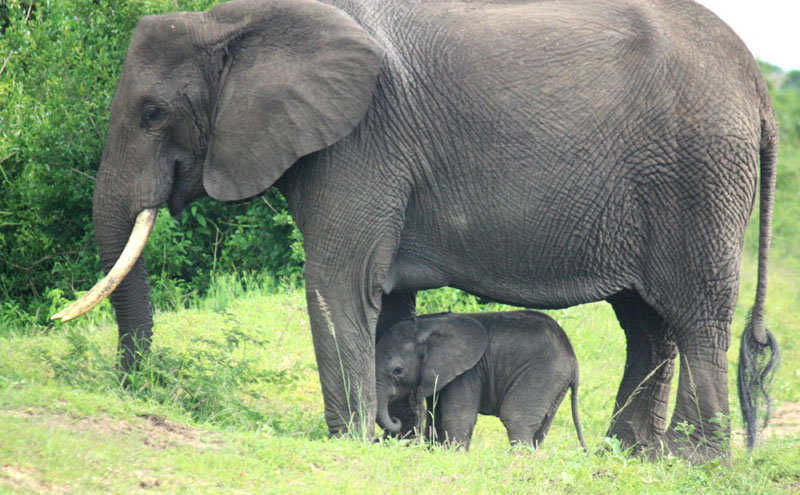 This may not sound like practical advice, but if you are making your way around independently, not on a guided safari, you really can’t do without a "bottle" full of chill pills -- whether that be a mindset (preferred) or if you need them, actual pills, which I sometimes do, haha. Things aren’t going to work out easy as pie, and definitely not on an American-style time schedule. Punctuality is impossible on public transport.

A practical item is a stand-up flashlight – my book light was awesome because it could sit on a table-top on its clip and function as a free-standing lamp. I used to think headlamps were convenient, but for just hanging out inside your hotel room or mud hut, this was way more comfortable. No place has reliable power – cities have rolling blackouts, and one place I stayed for several days simply didn’t have electricity at all, other places for only certain hours of the day by generator. Make sure you have plenty of batteries for your camera and electronics and charge the hell out of them when you get electricity.

Owing to the style of my blog, I think the audience I appeal to most are “armchair travellers,” people who say, “I couldn’t do what you do, so I love reading about it.” So, for example, when in primitive living conditions, I would get a lot of “glad you are there to experience this for us” kind of remarks. The post that garnered the most “I wish I was there,” was the experience I had gorilla trekking (sublime beyond words … though I managed to write a lot of them). There was a lot of interest in a witch doctor in the Rwenzori mountain range, and in a post titled, “Salt and Sex.” A lot of people were amused by my relationship with “Martha,” my roommate in my flat at the UWEC. She was huge and hideous and I desperately wanted to murder her, but couldn’t bring myself to do it on account of her size, so we struck a truce as roommates. Martha was a cockroach. 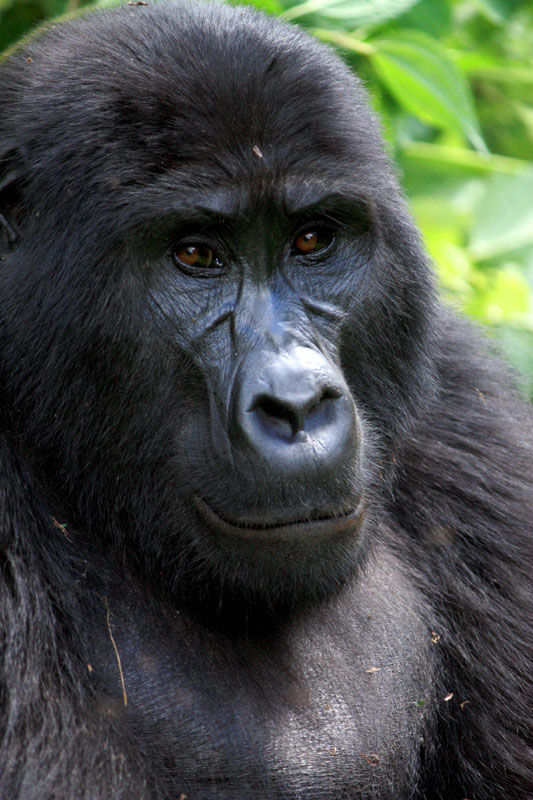 That I would not be able to find a pair of scissors. Anywhere. Knives, machetes, sure. Scissors, no. All I wanted to do was cut my bangs. I asked in every hotel and restaurant, stores in the cities, photocopying shops and internet “cafes” (yes, this needs quotes), school supply shops ... not even at the UWEC, one of the country’s self-proclaimed modernized gems, could I find a pair of scissors. I did not look in Kampala, as I spent no real time there except stuck for hours on the road in traffic jams, so maybe I could have found a pair there. Who knows. But it’s a big note to self should I (hopefully) return.

That's the end of the interview article. You can read more about Uganda in my archives .....