Kruger National Park, South Africa.
Tonight we’re in a campground inside Kruger. Even here at a campground the staff is splendidly accommodating -- we asked the front desk if they had mattresses available to rent (I read some blurb about it) so we could put one in our truck bed and not sleep on corrugated metal…. our Land Rover STILL hasn’t arrived. And the housekeeping staff drove around the campground with us until we found an open camp spot and then hauled a mattress into the back for us. So here we sleep, all relatively cozy in the back of our pickup truck (a "bakkie") on a mattress. Despite our intense annoyance at the Land Rover situation, gotta admit there’s something amusingly fun about this. 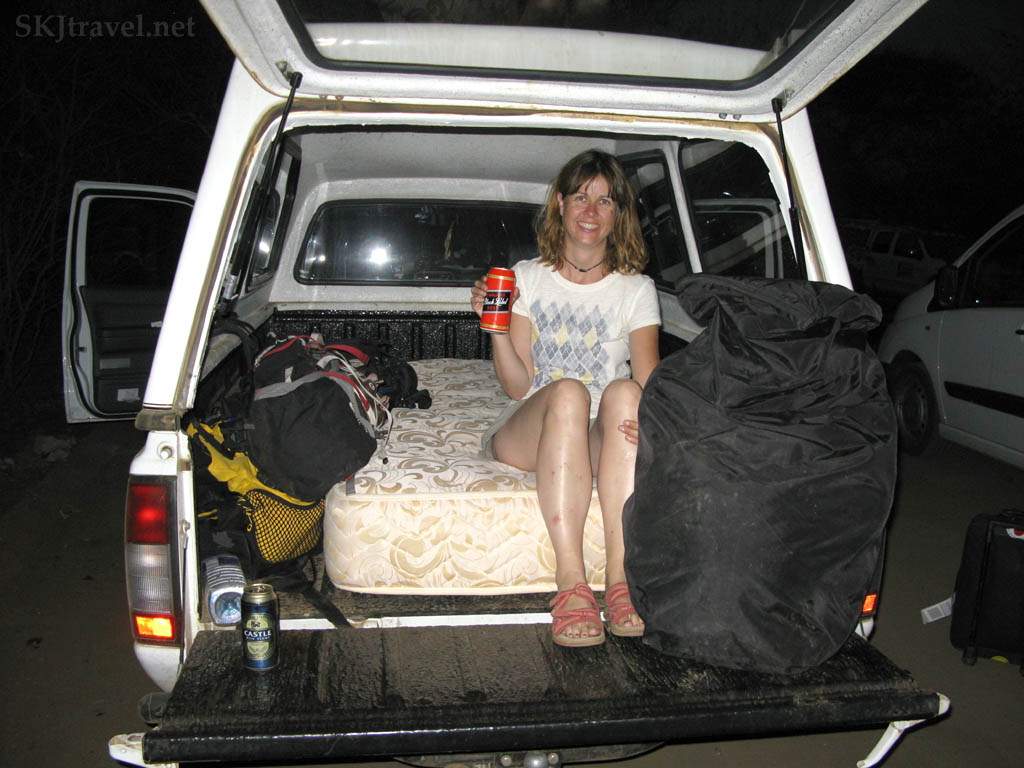 We had to drive pretty single-mindedly to our camp tonight as we didn’t have much time to make it in before closing time (gates close at dark). But even so, we had time to stop to see some giraffes, zebra, elephant, lion and others.  Hyenas were outside our dining table tonight (below the eating “platform”). Of course I’ve seen all of these guys numerous times now, but I’m not remotely tired of spotting them and watching them, and there’s a certain vicarious fun watching Erik see them all for the first time. I feel all old and nostalgic. 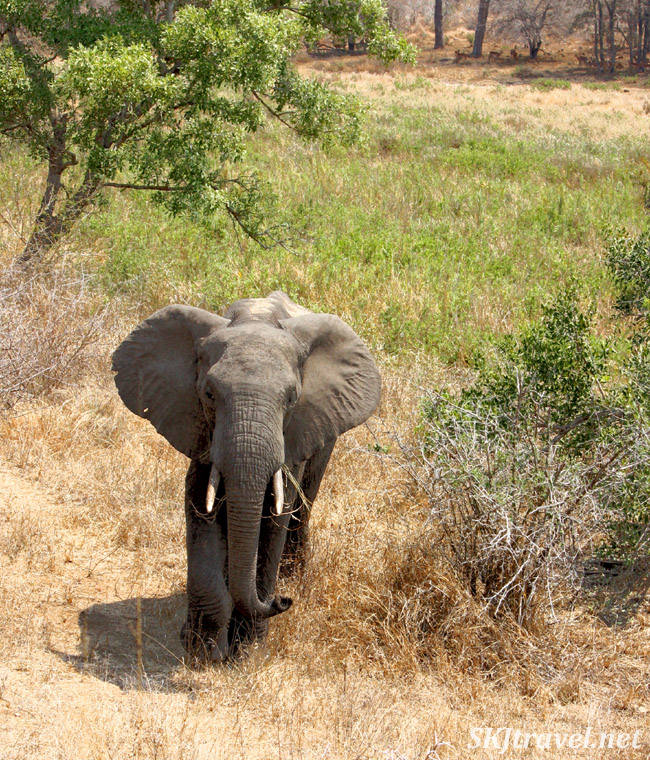 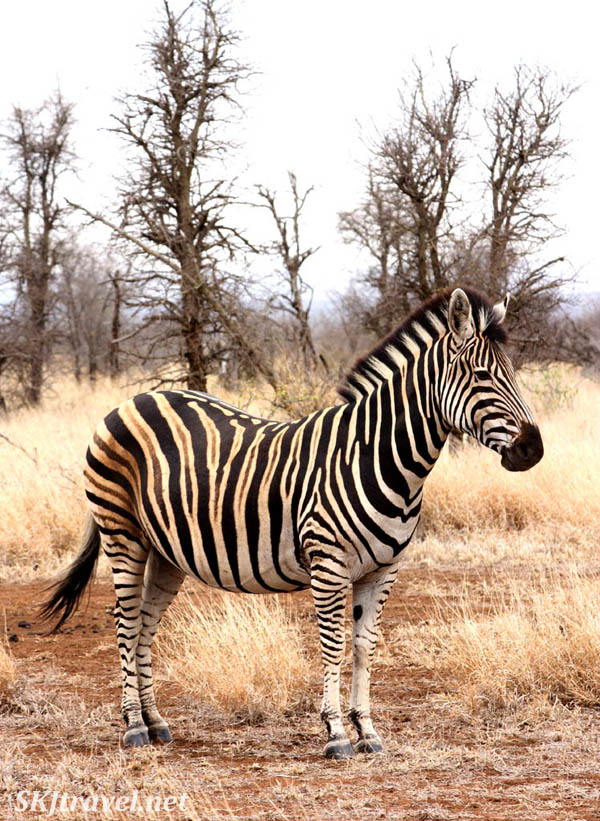 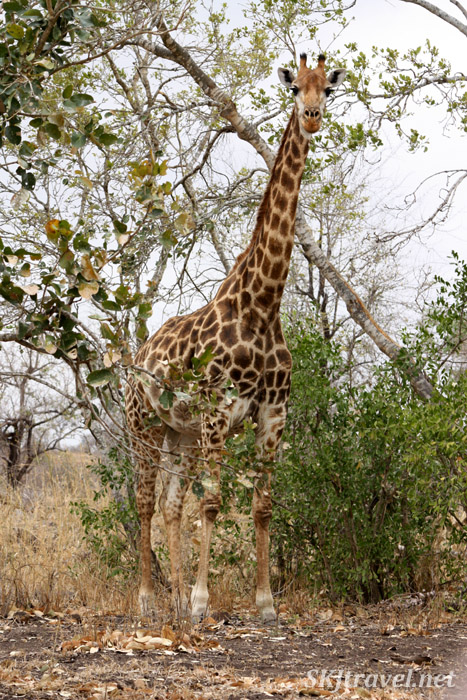 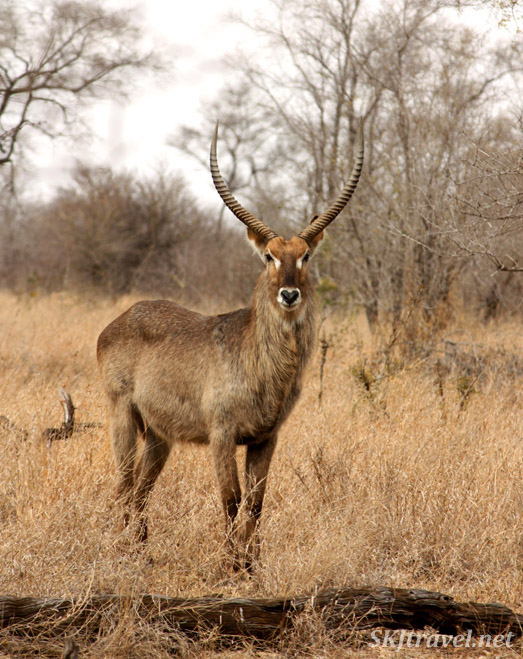 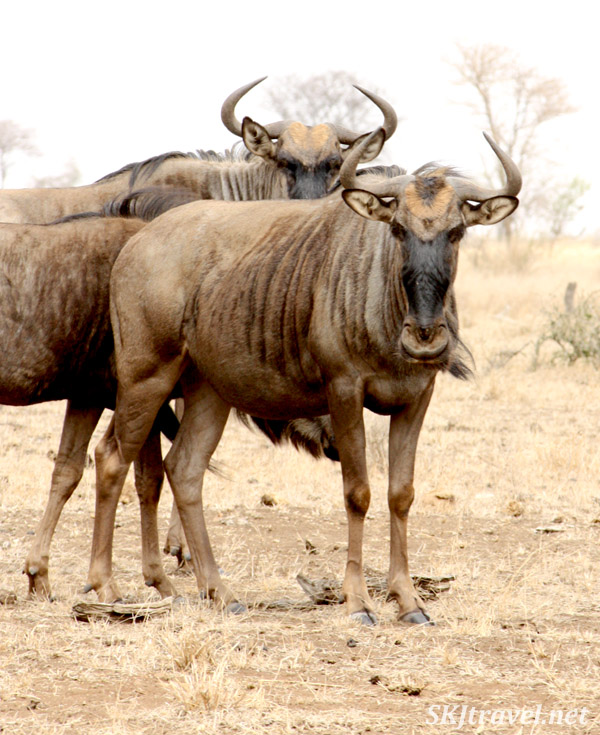 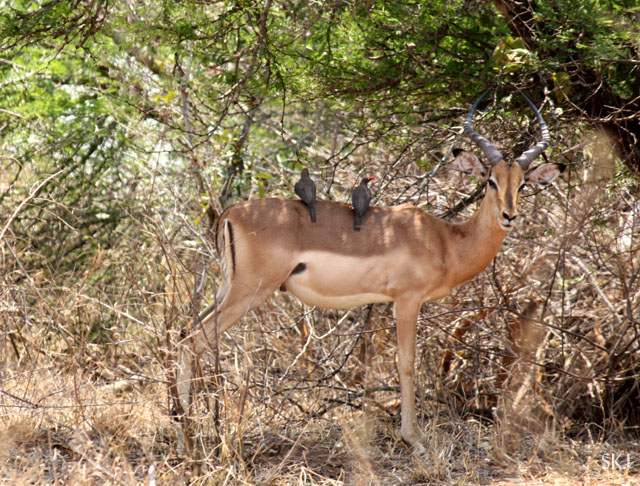 One amusement of the day was when we tried to buy a wire that would let us hook our mp3 player up to the car stereo (radio reception not great). The tiny electronic store had not the thing we needed; however Erik recognized that if we bought 2 of a certain cord, we could cut them each in half and splice them together to create the cable we needed. The store guys were very impressed with this feat. They happily loaned us wire cutters and tape and were happy to see our plan succeed. Woo-hoo.

Next morning was more nostalgia for me as we got up at the familiar hour 4:15 a.mm to go on a guided walk. Though I’ve obviously spent a lot of time this way, I thought it would be nice for Erik to get to walk through the bush a bit.  Had one particularly good white rhino encounter with a mom and baby drinking at a water hole. Very different from roaming about with one field ranger who is not a tour guide, merely an experienced field ranger keeping you safe while you encounter wildlife, what now seems to me rather cavalierly after seeing the precautions and restrictions the walking guides impose here. Can’t blame tour guides, I mean keeping 4 to 8 tourists, many without any sense of how dangerous the bush is, must be quite a task. The Kruger guide and ranger, both armed, came across a cobra in the trail; the ranger jumped half a mile in the air bringing his rifle to bear mid-air toward the snake. Impressive reflex. My field rangers on transects were also very jumpy if they thought they saw a snake.

Spent the rest of the day driving to the next camp, Pretoriuskop, and sighting animals along the way. The distance in kilometers is not that far; you start out thinking you’ll be to your destination in an hour or so, but it takes about 3 times as long because you stop so often to view or scout for animals. A lot of elephants out today. Terribly exciting to me. 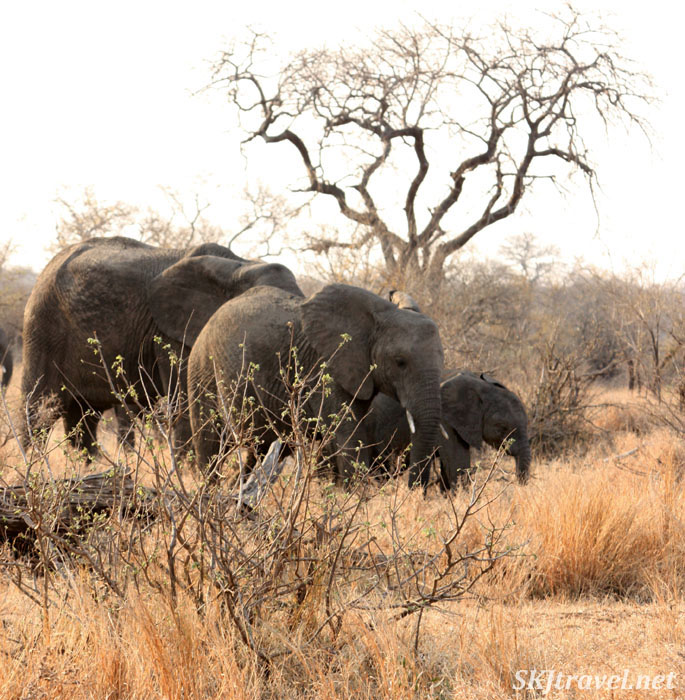 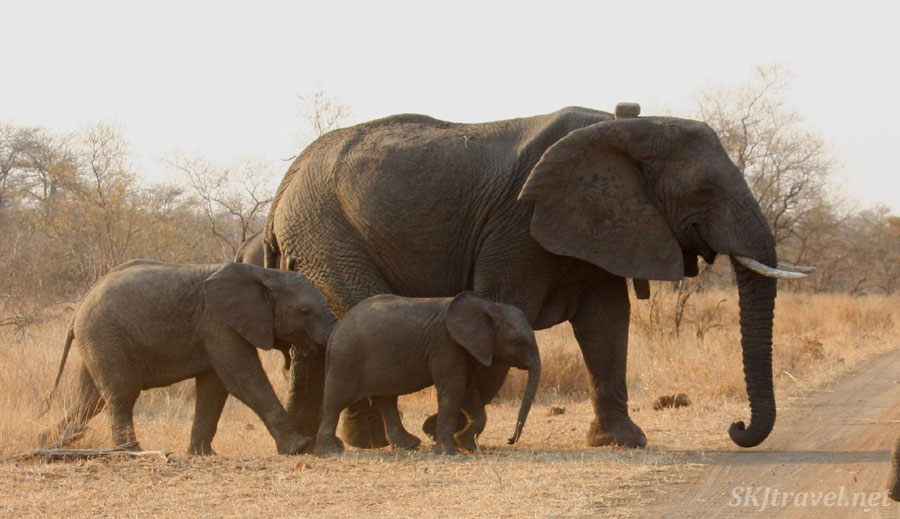 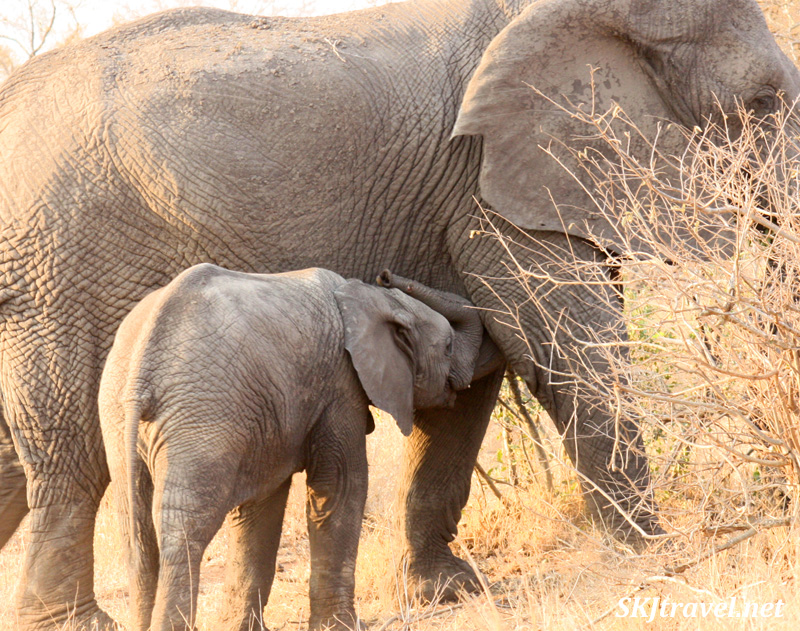 The car rental people claimed fairly stridently they would find us at camp tonight to trade vehicles. After the camp gates closed, there was still no vehicle delivered to us, so we were left with the prospect of sleeping on the corrugated metal truck bed for the night and no cooking utensils. But we ended up in a chat with the people camping next to us and they happened to have an extra air mattress with them. They were kitted out with a massive camp set-up, as many folks here are, practically a mobile home folded out from their truck. What are the odds people camping next to us have an extra air mattress they’re not using? So they loaned it to us and we put it down on top of our luggage. Over the course of the night it deflated to pretty much nothing, so we were left sleeping on suitcases and daypacks; but it was way better than the metal truck bed, and it was sporting of our neighbors to offer it.

Erik knocked off early but I offered those folks the perishables we had bought to fix for dinner but now had no cooking gear (we ate out at the camp restaurant instead). They offered me a seat and a beer and we stayed up, the couple and their 12-year-old son, for several more beers while they regaled me with many amusing stories of their 4x4 escapades and the lady’s eccentric kooky mother. I have come to firmly believe in my travels around the world that perhaps the single best skill a traveler can have is the ability to stay up late and kick back a few drinks. You meet more interesting people, come across more hospitality, have more unlikely adventures and see more elephants at bush camps if you can connect with people this way. You might say, well you don’t need to drink beer in order to stay up late and hang out with people, but I would beg to differ. People seldom invite you to come by or sit down and share a cherry soda; a late night beer is a universal form of comradery.

Anyway, so this morning we got a permit to drive on one of the 4x4-only roads in the park. They only allow 6 vehicles per day on these trails. As we were leaving the camp we passed a truck full of field rangers armed with machine guns. A ranger just came in here to the camp reception where I’m typing this waiting for guess who… the rental guy to deliver our truck… and Erik asked him about the machine guns. He said (as we suspected) they’re on their way out to patrol against poachers. Our drive was fun, kind of like walking transects, where you get to go into the park, see what’s over the horizon… and feel the vulnerability of being a little human in a land of very big animals. To add a wee bit of adventure, we of course don’t have a cell phone. If something were to go wrong with the truck or something, we would not be allowed to walk back down the road to get help. We’d just have to wait there until either another vehicle came along or the camp realized we didn’t return that night (you must register and report back when finished with the route). 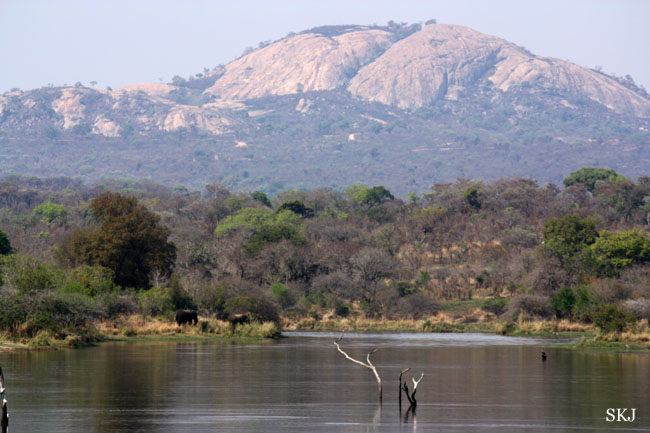 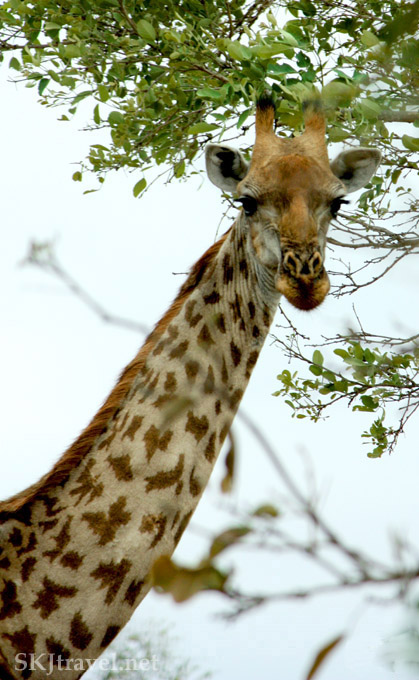 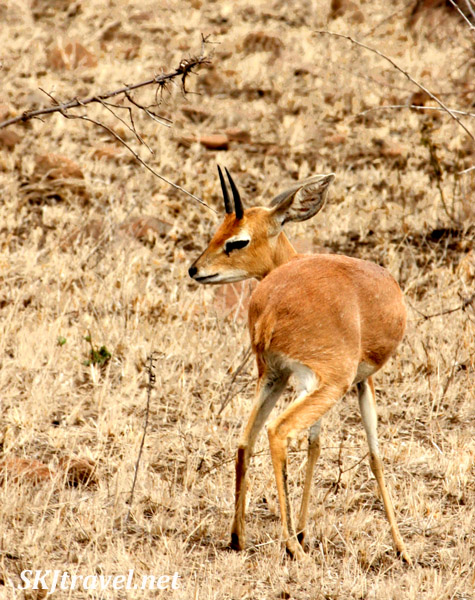 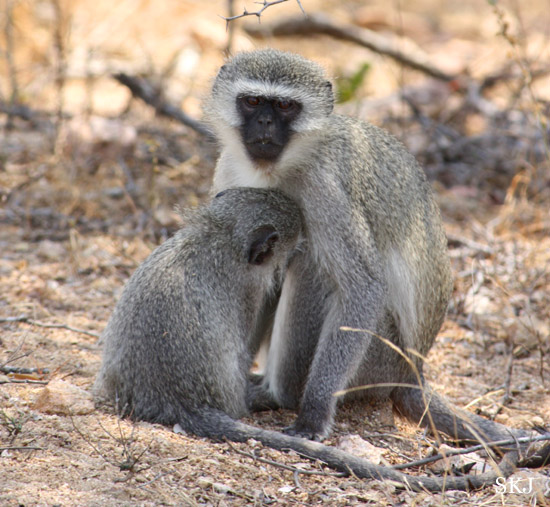 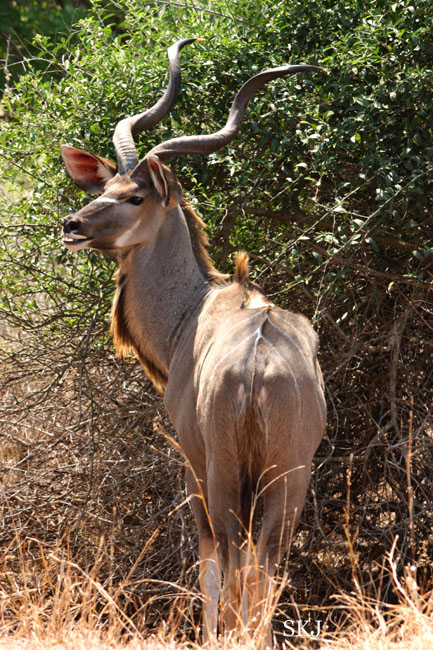 Did I mention the truck full of kids like cattle on field trip in St. Lucia? It has taken me by surprise a few times to see here the lack of child safety regulations in vehicles. It’s like the good ol’ days when I grew up. I see people driving through the parks with their toddlers standing on their lap at the window, kids piled up several to a seat, etc. The funniest one I saw was a truckload of kids on field trip in St. Lucia (where we had holiday during mid-expedition). It was just like a utility truck with a metal railing all around the kids packed in, standing room only, like cattle. No school buses here, just cattle cars.

Well, speaking of vehicles, we have finally made the big Switch and received a camper Land Cruiser…. A bushcamper that we can sleep in and cook in and has good 4x4 capabilities. But after having had our interim Nissan that cruises at great highway speeds and has AC, we are feeling a bit deflated…. Can’t even drive the speed limit up hills and the big faux pas of the rental co. was forgetting we had expressly ordered a vehicle with AC. It’s brutally hot here and now we’re driving around at 30 to 40 km per hour with no AC. I got out of the car at a gas station, and it looked like I had peed my pants with an elephant’s bladder. I was so hot and sweaty. So, not feeling super psyched, but we’ll see what adventures await us.

We’ve now pulled into Graskop in the Blyde Canyon area. Beautiful and dramatic country with deep lush canyons.We encountered very pretty scenery driving from Kruger to the Blyde Canyon area. We camped last night at a campground near the top end of the canyon and got a beautiful overlook of it. Good thing, because the next day the canyon, the full canyon, and only the canyon, was completely shrouded in fog. Drive a mile away and it was clear. So we couldn’t see any more of it. 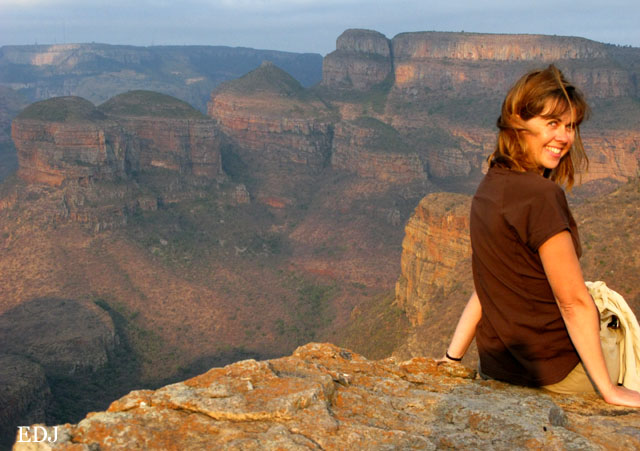 But stopped off at a beautiful spot of waterfalls and pot holes – rather like slot canyons in Utah. Lisbon Falls, left, Bourke's Luck Potholes, right, photos below. The couple camping next to us at Blyde Canyon was very interesting; they’ve been traveling the word for 13 years in this crazy custom-built vehicle, a huge affair that can drive anywhere over any terrain and has a massive living area in the back. They will have traveled to 120 countries by the end of their trip. (though one wonders whether they’ll ever be done, this is their life now) They say the biggest obstacles are dealing with visas and entry permits for the vehicle. 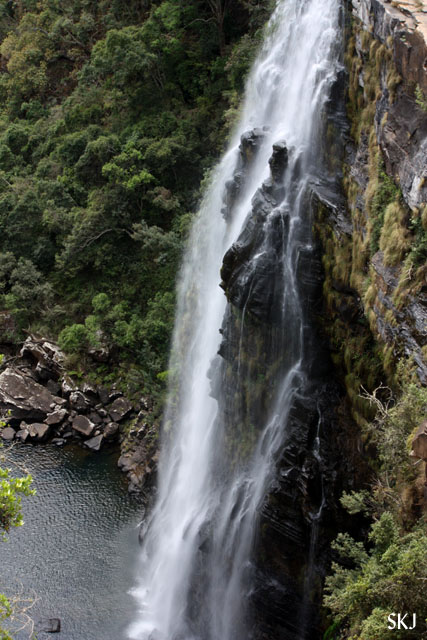 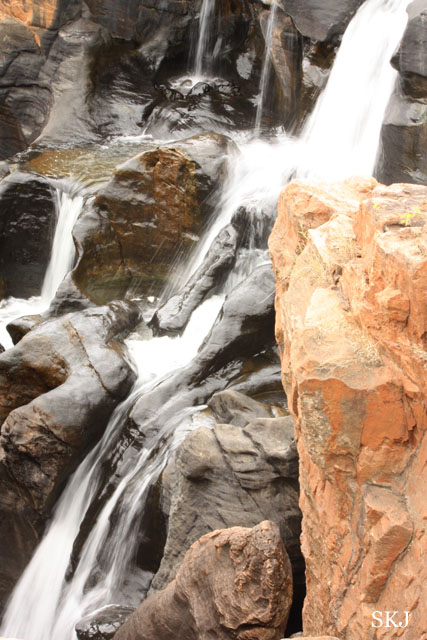 A colorful lizard and fun with water at Bourke’s Luck potholes. 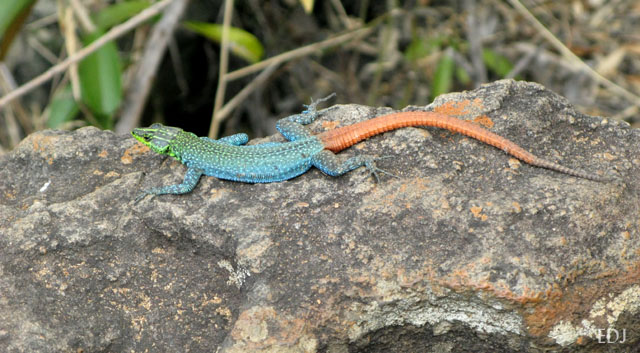 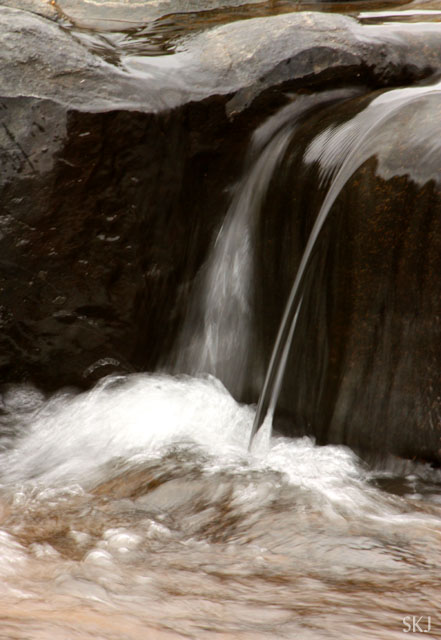 Baboons and vervets roamed the campground; I know they’re pests but they’re so fun to see. As we left Kruger, we witnessed a baboon drama unfold near a bridge: the young ones were being all ruckus causing trouble, and the big male ran over and scolded on of the little ones, biting him quite severely on the neck, and then the mom ran over to tell the male a thing or two about the kid being hers and he doesn’t have to right to discipline him, so mom and baby lope off leaving the male peeved at the outbreak but submitting to the mom’s wish to put an end to the punishment. 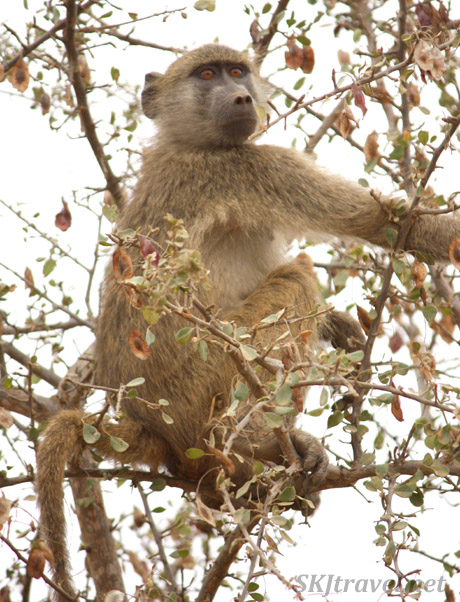 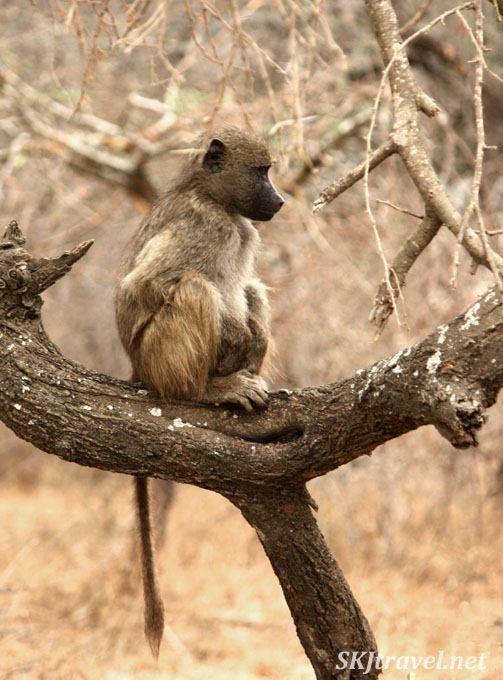 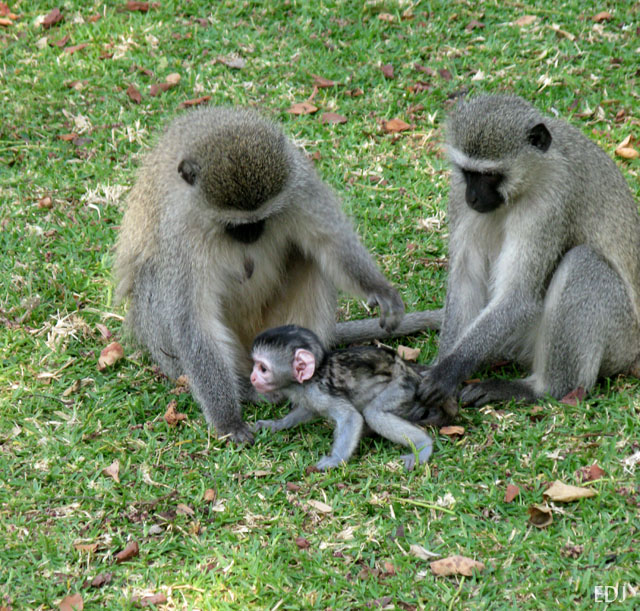 Tonight we’ll arrange the inside of the camper and bring some order to our lives finally. But for now sitting outside our hotel room in Graskop in the cool breeze (higher altitude here than Kruger, so is cooler) drinking … um… well, yes, a beer. Or two. Back into Kruger tomorrow for a couple more days. Unlike the areas we’ve been to so far that are parched waiting for the spring rains, this place is lush and has lots of brilliant flowering bushes and trees. A nice spot of color in our lives before heading back into the bush.