If you’re interested in traditional Persian culture, Yazd is definitely for you. As I explained in the last post, Yazd 1, there are several cultural and architectural features better preserved here than in most cities. Additionally, Yazd has always been known for its technologies in creating a cool environment in the desert and as a center of the old zoroastrian religion.

We visited a water museum, which is housed in the former home of an elite family. The courtyard was lovely with a collection of large water jars, and of course a long pool. And can I just say how torturous it was to be clad in my long sleeves and head scarf in the hot sun surrounded by cool, gloriously cool, water. I so wanted to just wade in with my clothes on and lie down. 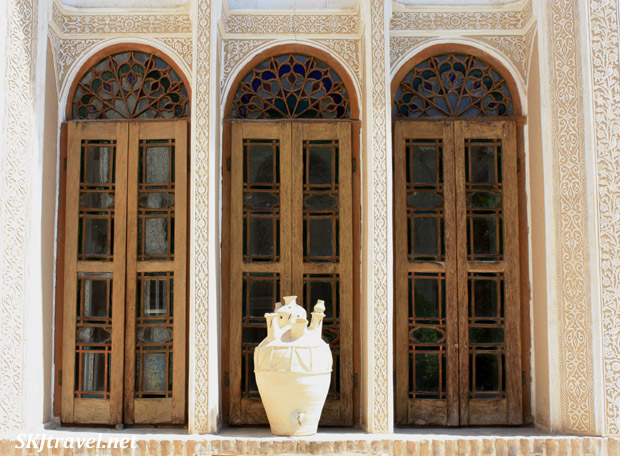 Can you spot "Waldo" (i.e. me) in the reflection of the window? You just can't get away from reflections around here ... mirrors, windows, pools.The covered platform (second photo) is where the family would hang out in the cooler evenings. 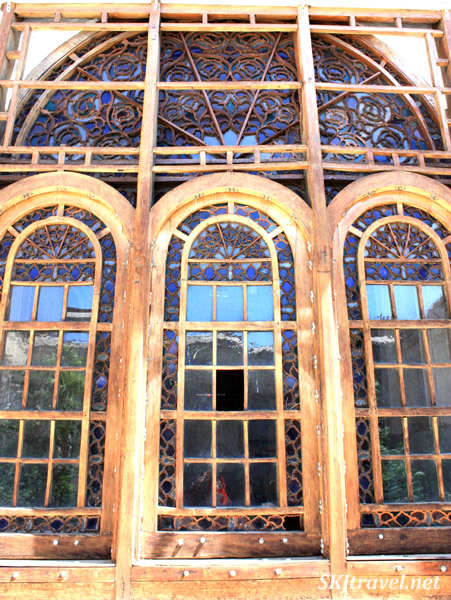 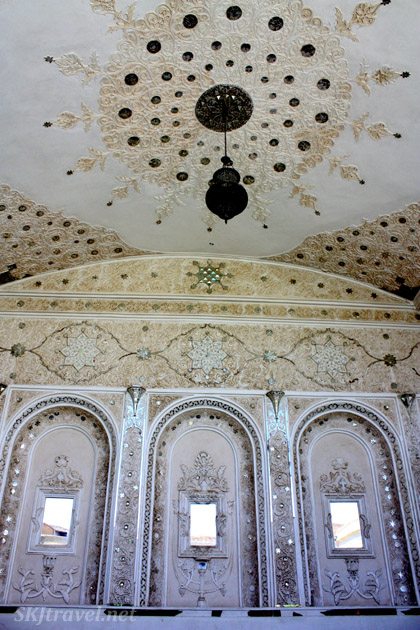 The museum shows how “qanats” are made. These are underground canals dug from water reserves in the hills to bring water down into cities and into the homes of the wealthy. Yazd has one of the most extensive networks of qanats. Might not seem such an impressive task, but here are some photos of the process … you certainly couldn’t be claustrophobic to work in these! Look how tiny the canals are. Notice the lighting attached to the walls ... just some puny little flames of fire (presumably kerosene?). 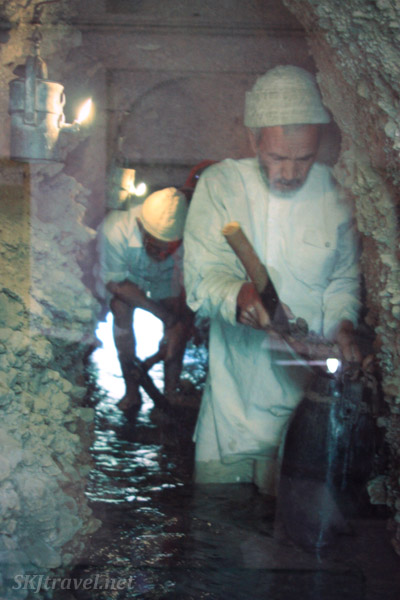 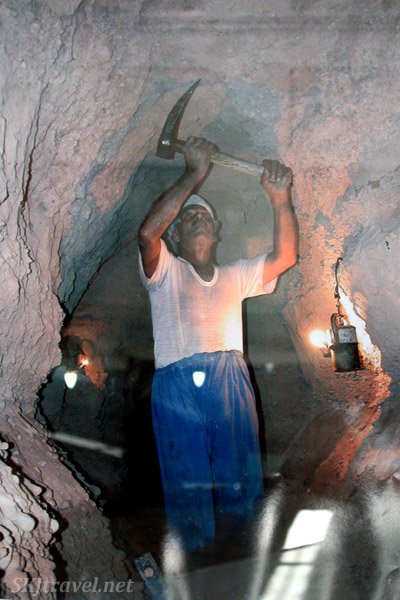 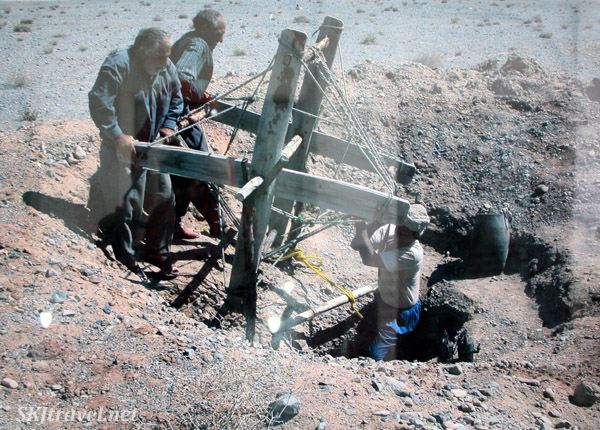 In the hot arid climate of much of central Iran, people for a very long time have harnessed the cooling power of the earth and water. Wealthy homes and some public places had rooms dug down below ground and most of these had a pool of water in the middle with benches cut into the walls all the way around. Here is where wealthy homeowners took their siestas and escaped the brutal summer heat, like being in a cave. The temperature was definitely significantly cooler, and people would also refrigerate their food in these cool chambers. 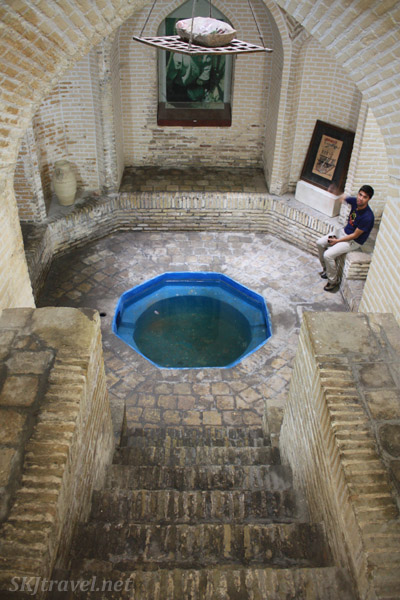 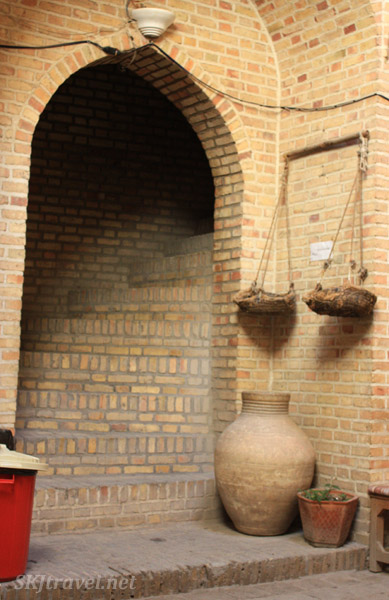 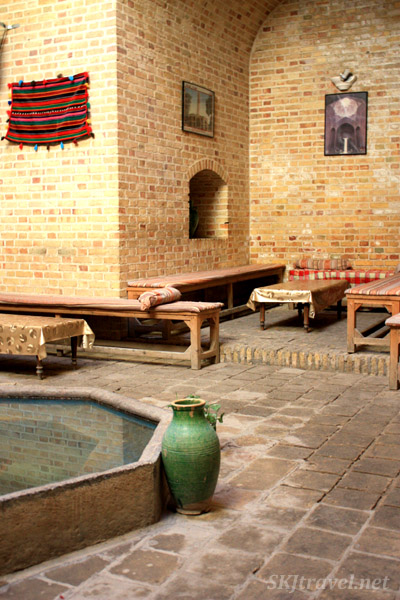 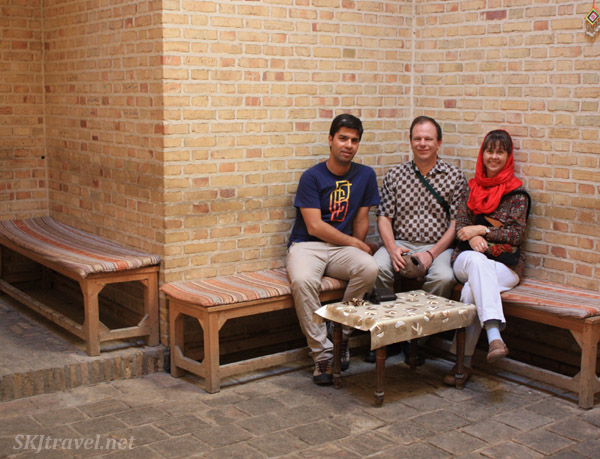 In the alleys of the bazaars there were once public spigots and fountains where people (the common folk) could gather water for themselves. 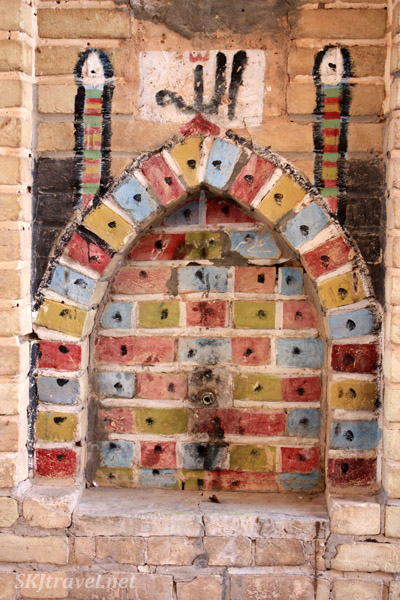 One evening we went to a nice garden, Dowlatabad, and had ice cream. The nice thing about the Iranian equivalent of picnic tables is that they’re basically beds with carpets, so after you eat you just lie down for a nap! You can do this at tea time, too! heh. (not that I approve of Erik snapping pics of me sleeping ... but just to illustrate for you, my dear readers) 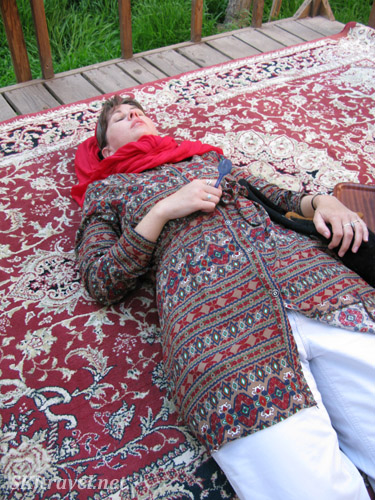 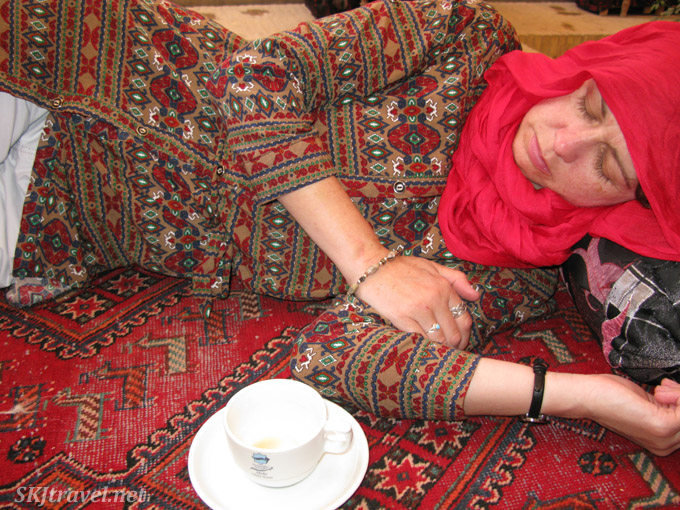 The garden had some lovely stained glass windows that once upon a time reflected their colorful light onto pools inside the garden house. 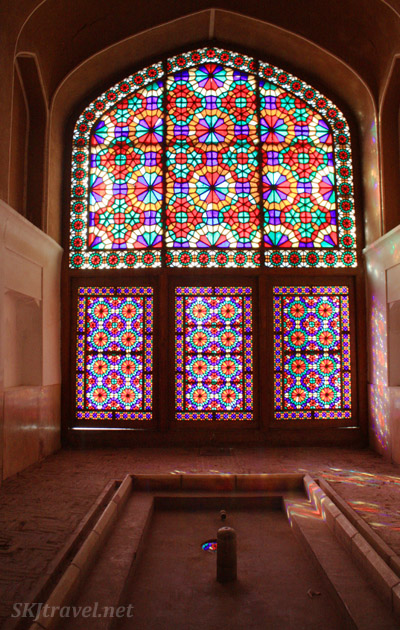 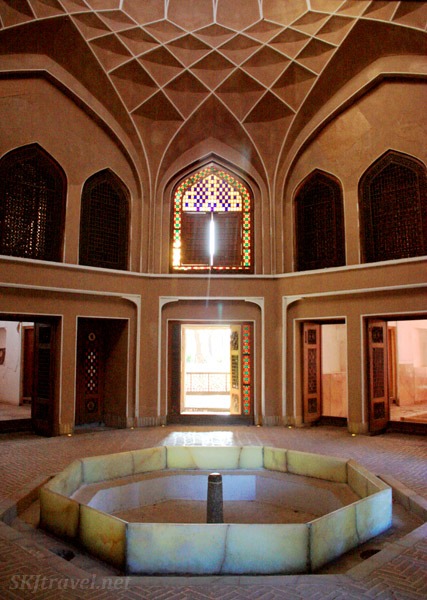 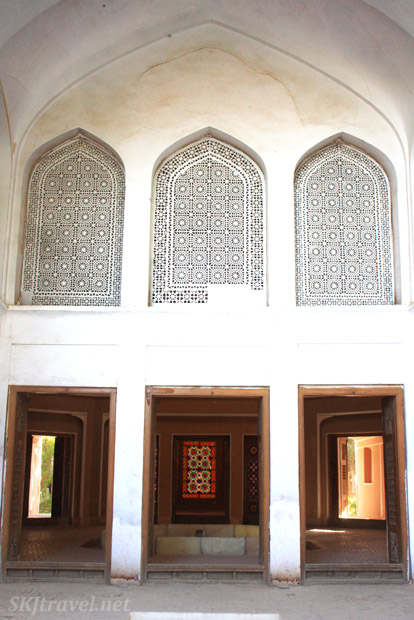 Dowlatabad has what is said to be the largest wind tower still in existence (first photo below). Wind towers, or wind catchers, are another innovation of a civilization making their home in a hot desert environment. They were invented by the Persians millennia ago. 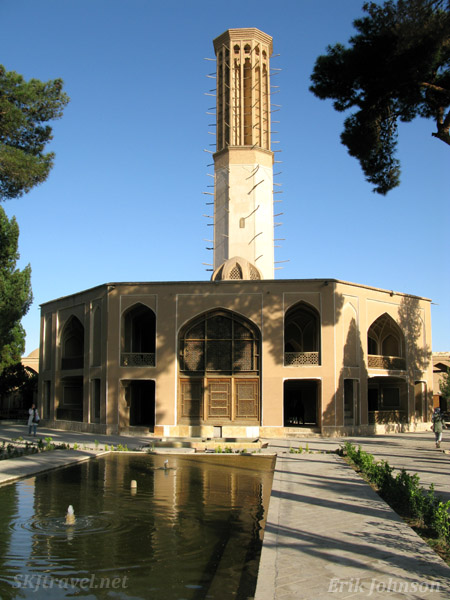 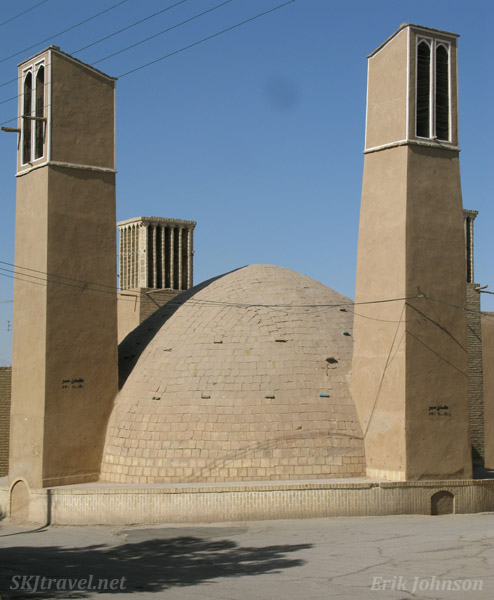 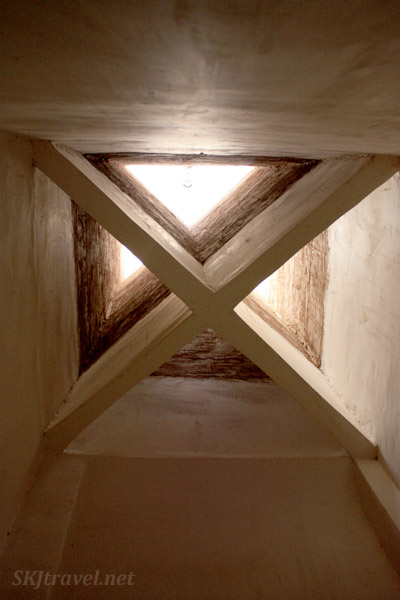 Most wind towers are built above a cistern in order to also provide humidity indoors. You could almost call them an early-model swamp cooler, blowing air over water.  The large tower is open at the top on the side of the prevailing winds in order to catch them and draw it downward. I was quite surprised at the strength of the “wind” that was created at the bottom of these towers and subsequently funneled throughout a dwelling. They can operate in one of three different ways, but you can Google it if you want to know the specific mechanics. Suffice to say, they’re great air conditioners and Yazd is one of the cities most renowned for using this technology. The photo on the left is looking up into a wind tower from the bottom of it.

Yazd is also a center for the zoroastrian culture and religion, the religion of the ancient Persians.  zoroastrians don’t worship fire (they have a monotheistic god), but fire symbolizes purity to them. In the Fire Temple just outside Yasd, a flame has been burning continuously for 700 years. It’s held inside a large metal cauldron and it’s been moved several times over the centuries before ending up in this spot, but the flame itself has been kept alive the whole time. You can see it behind a glass partition. Only those who tend the fire are allowed near it.Each year, even still in present times, zoroastrians light a giant bonfire near the end of winter to warm the heart of the earth and encourage spring to come forth. 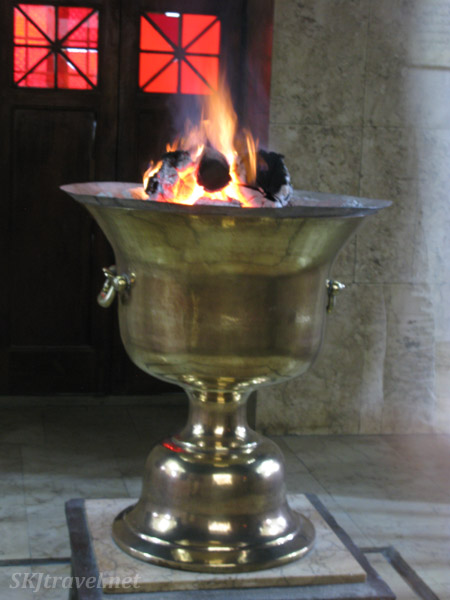 We also visited the Towers of Silence, a small ruined complex near the edge of the city. You may recall that in the tombs outside Persepolis I told you how the kings followed the zoroastrian tradition upon their death and were left in the open air on a ledge outside the tomb until clean bones remained. “Towers of Silence” were places where the other common people were left lying outside on a platform until the bodies decayed and only bones were left. You could almost mistake the round towers for part of the natural mountaintop. 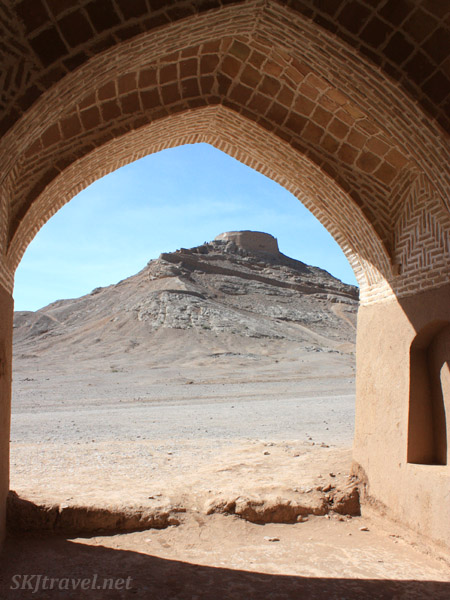 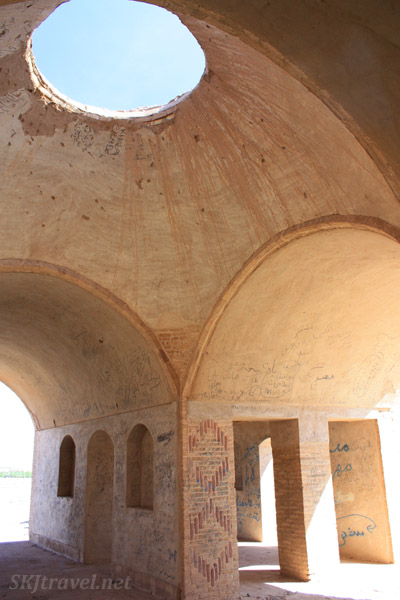 At the ones we visited in Yazd, there could be as many as 10 to 20 bodies at a time lying in the open tower. This ritual was practiced until about 50 years ago when the government decided it was unsanitary and closed the towers down. It's not a very exciting picture, but below is just to show you how plain the tower is inside ... literally nothing more than a platform open to the sky. 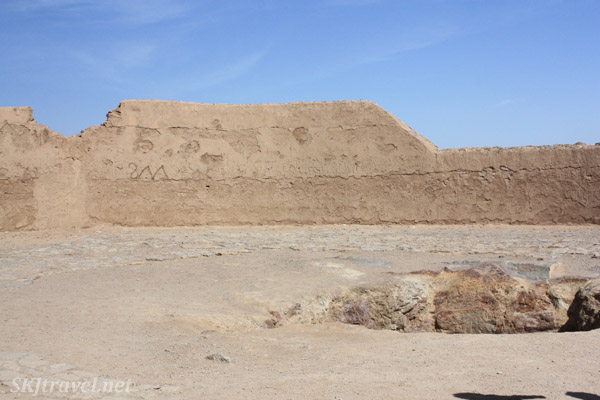 Outside these silence towers in Yazd, an old man sits and poses for pictures with tourists. He is the last remaining watchman … he used to watch over the bodies as they decayed in the tower until their families could bury them. Can you imagine what a gruesome job … each day walking into a platform with 15 dead bodies in various states of decay. I wonder if he was ever curious enough to make forensic observations or if he simply looked on while the weather, birds and insects ravaged the soulless vessels. Perhaps he looked at them no differently than a tree fallen in the forest, slowly rotting, digested by other organisms to fuel their life. 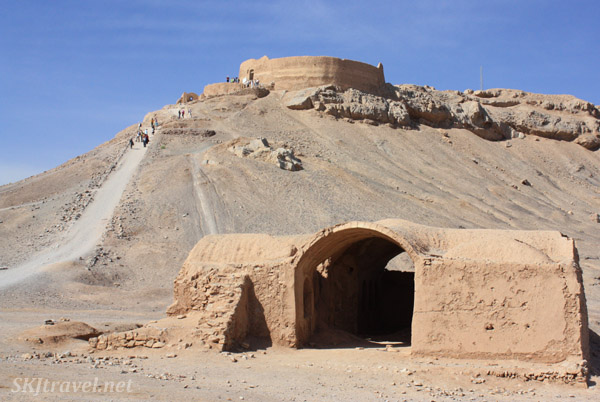