Next, after my fabulous day hiking the Great Wall, I decided to go to the Summer Palace, which was the Beijing attraction most recommended to me.  I read a two sentence blurb in my Beijing guidebook about there being a way to get to the Summer Palace by boat up "a Venetian canal."  I mentioned this to several people at the hostel who had been to the Palace and they didn't know about it.  I asked the very helpful front desk staff at the hostel, and they had never heard of it.  But there was a phone number in the guidebook that they called for me and found out where to catch the boat.  Well, sort of where to catch the boat.  A very vague, general area of where to catch the boat ...

A taxi dropped me off at the Beijing Exhibition Hall, and there was absolutely no indication there of the boat the guidebook promised would be there.  So I had to put some of my language skills to the test and start asking people where it was.  The first person I asked (a security guard) looked at me like I was from Mars when I spoke to him.  He called over a buddy to whom I repeated my question and he looked at me like I was from Venus.  A third pal was called over and I suspect he was thinking more like Neptune or Pluto for my origins.  Finally they understood "summer palace" and pointed me to go ask someone else "over there."  I asked over there and that guy looked at me like I had leprosy.  But after one repetition of my question, he understood and pointed me somewhere else.  I walked somewhere else and there were no boats nor people to ask.  And time, by now, was running thin – the boat was supposed to leave in just a few minutes.  So I went around the back side of the building and asked two people along the way, both of whom understood me and whom I understood well enough to find my way to the boat just in the nick of time.

But then after I bought a roundtrip ticket, I changed my mind and decided I only wanted a one-way ticket (an excellent decision, it turned out, on my part).  Trying to explain this to the ticket vendor, just as the water taxi was pulling away from the dock, annoyed her and worried me, but it was accomplished just a little bit past the nick of time, and she had to run down to the dock and call back the boat.  It came back to get me and then had to speed off down the canal at warp 18 to reach in time the big boat that ferries people all the way down to the Summer Palace.  But it all worked out, and it was a much more pleasant approach than via taxi. The boat entered the Summer Palace complex at the 17-Arch Bridge. There's quite a lovely gift shop on the little island the bridge leads to. 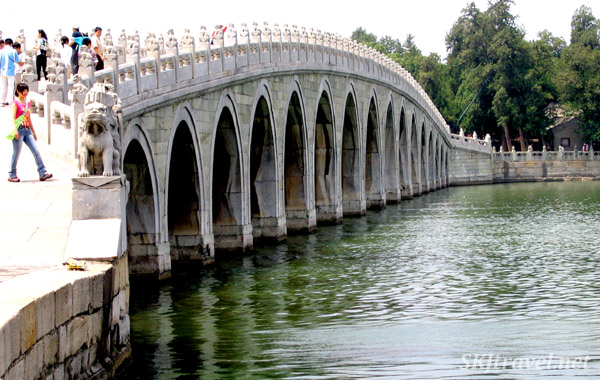 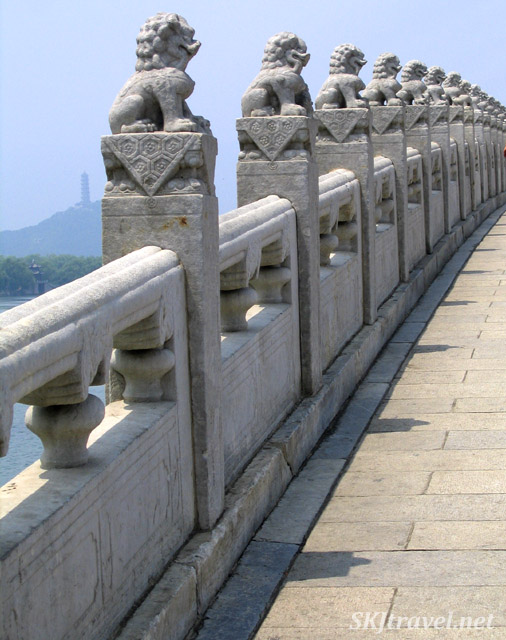 Fairly cool weather again, so I hiked all around the Summer Palace quite comfortably.  This is an extensive collection of buildings around a large man-made lake, Lake Kunming. Really impressive to be man-made! Great walls, gigantic lakes ... Chinese labor can accomplish a lot.  Gorgeous buildings and pagodas.  Originally built in 1760 and updated in 1886.  In its last days, it was the relaxing grounds for the infamous Empress Dowager Ci Xi, whom the Chinese curse for the decline of China from its former glory. Her frivolous excesses were legendary. Notice in this depiction of her, her long fingernails ... those are metal filigree caps on her fingers. When my dad went to China, he brought one of these fingernail things back for my mom. I was always fascinated with it. 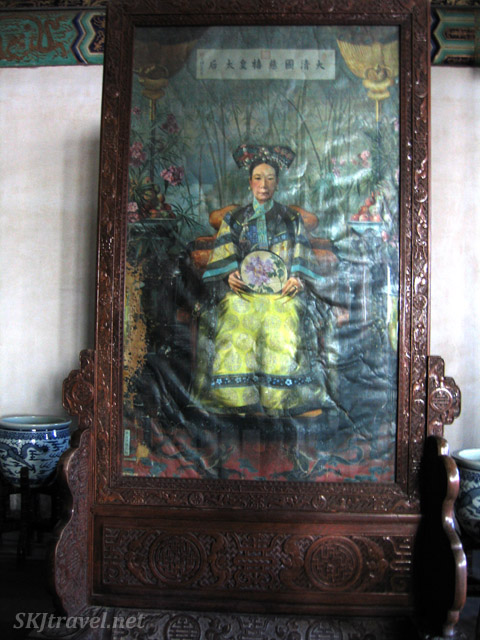 Here at the Summer Palace one finds the classic sort of ornately painted ceilings and tiered roofs on the buildings. They're integrated into the hillside with rocks and trees, gifting a very organic feel to the place. 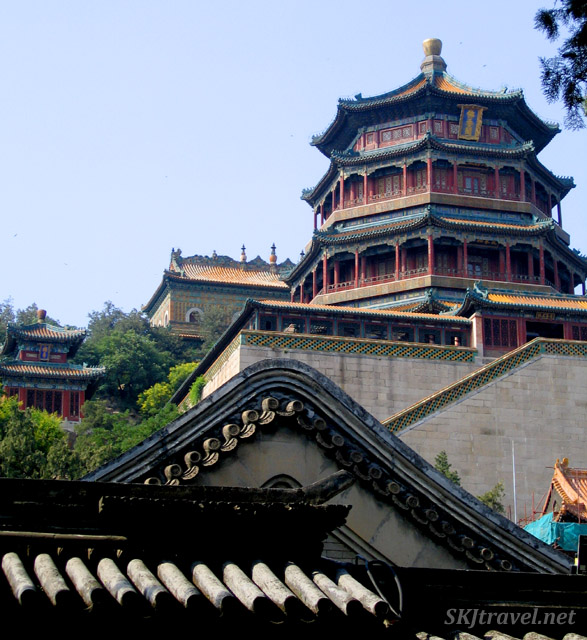 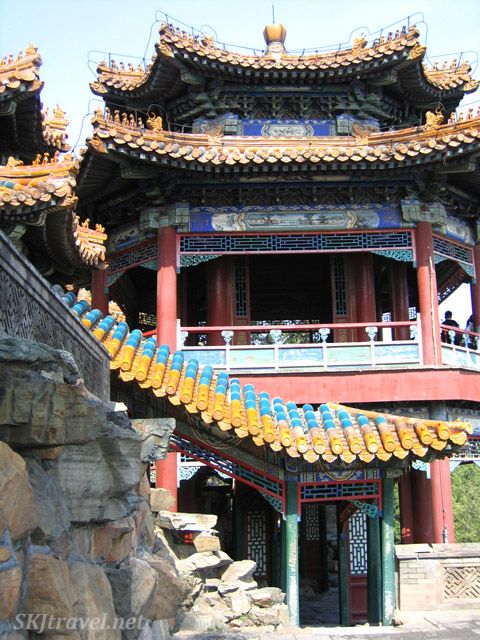 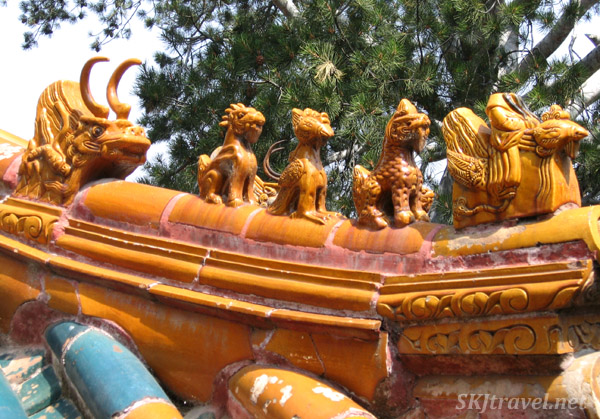 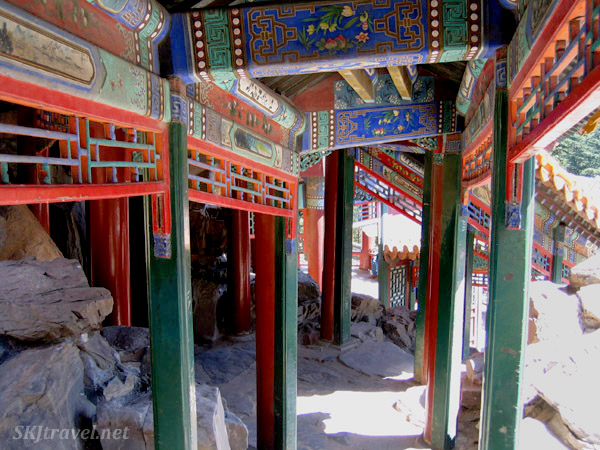 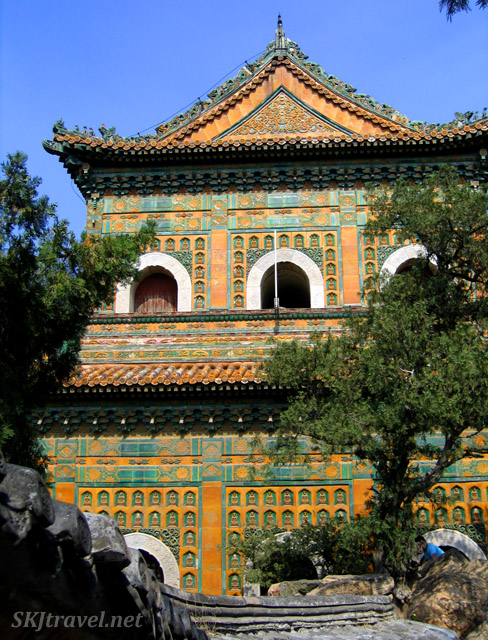 Stretching for nearly a kilometer along Lake Kunming at the base of the hill, there is a covered walkway, aptly referred to as “The Long Corridor,” painted with thousands of different little scenes along the top and sides of the interior of the walkway.  It was fun to walk the length of the corridor to inspect all the scenes (something traveling by myself allowed me the luxury of ... taking all the time I wanted to commune with whatever touched me while sightseeing). 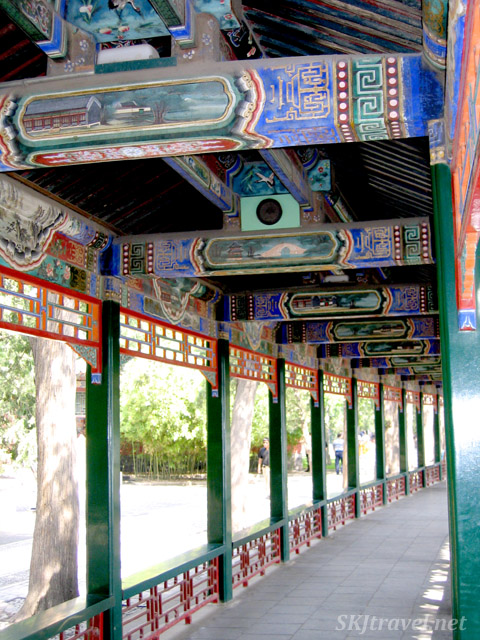 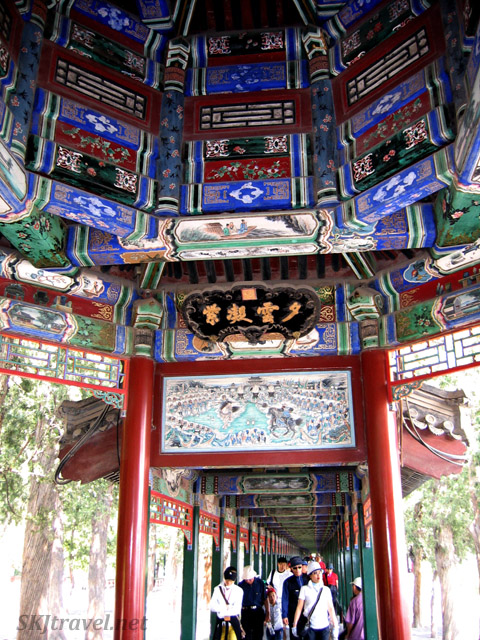 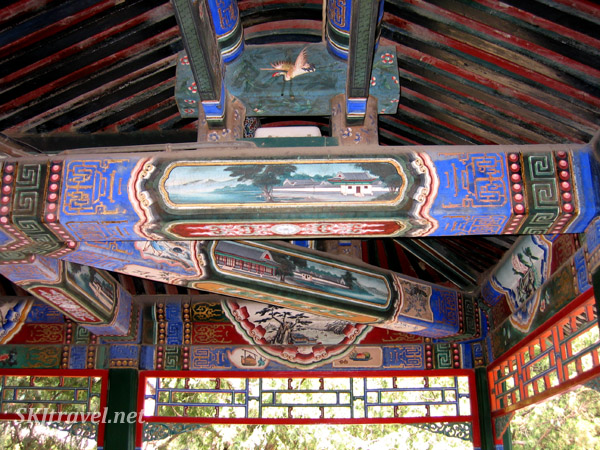 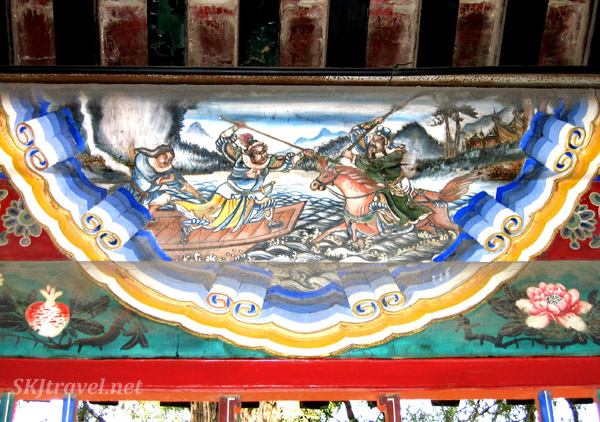 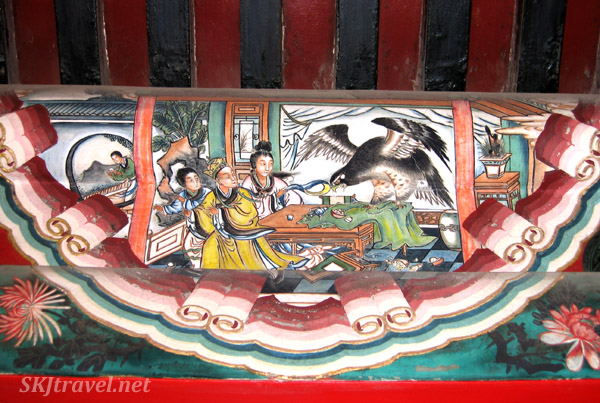 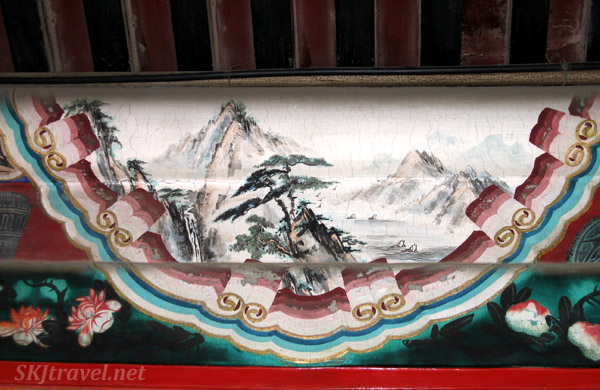 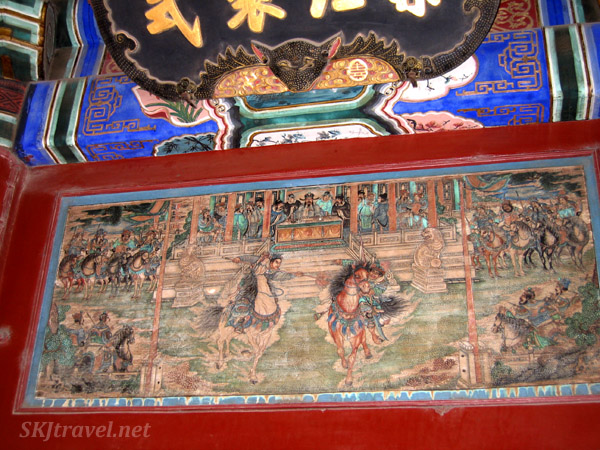 There is also a high road along that side of the lake which offers great views of the lake and the island with the cityscape in the background ... kind of puts it in context -- this ancient imperial world smack dab in the middle of the epitome of high-rise modern culture. Second photo is a marble boat commissioned by empress dowager CiXi ... demonstrating her wise use of the kingdom's financial resources in the pursuit of complete practicality. 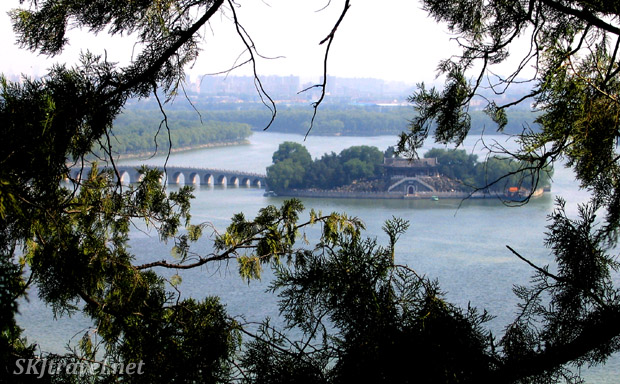 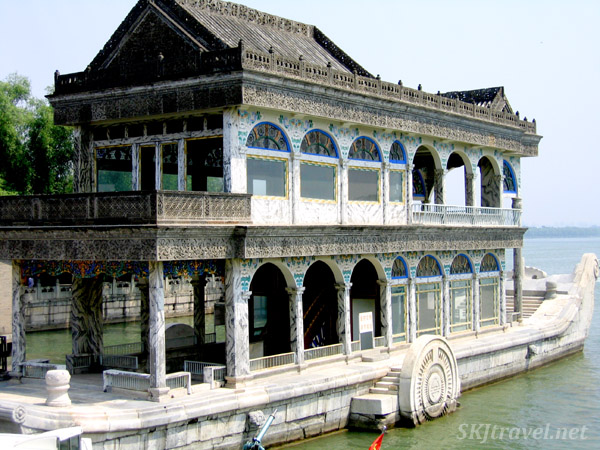 It's a peaceful trail through lush trees and shrubs to climb the hill and look out over the former imperial dominion. So I walked the long corridor in one direction, came back along the high road, and then walked the corridor again a second time. In my ramblings, along with the well-kept fancy buildings, I ran across some older, more run-down areas that, frankly, I found almost more appealing. 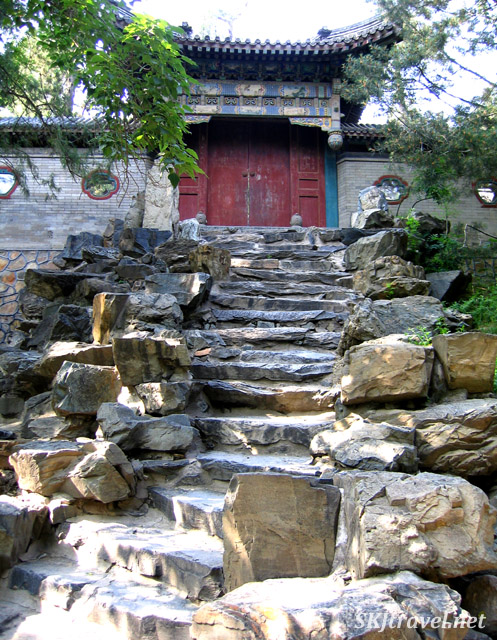 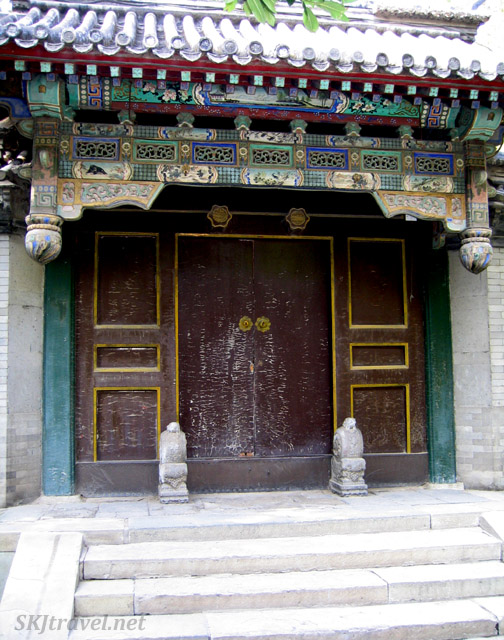 To sum up my completely fabulous day, I will carry on the recommendation to anyone I meet who is visiting Beijing to visit the Summer Palace.

I ended my day by having dinner with Linda and Vivian.  Linda is my friend Steve's penpal.  She has been living in another city in China but just moved to Beijing last week.  Steve told her I was coming to Beijing, and she emailed me with her telephone number.  So I called and she and her friend took me to dinner tonight.  We had excellent food.  We had three dishes:  eggplant with dry spices and garlic paste (a spicy dish); ground pork and green beans; and some kind of fish I'd never heard of with a tangy sauce.  All yummy!  The menu, though, was hilarious.  Some of the dishes I passed up were pig intestines, chicken claws, crab roe and tripe, and diced bullfrog.  I may have dinner with them again tomorrow.  Well, I've written a lot here, but yet the smidgeoniest smidgeon of my lovely experience here so far.  :-)  I hope the rest of my trip is so lovely.