It was a very novel experience for the peasant villagers in China to be around cameras and to have people clamoring to take their picture – and not just people, but the novel Westerners; most villagers had never seen one until our ethnographic research teams arrived. The majority of villagers I saw wore the same clothes every day … washed at night every few days and donned again in the morning (the men often removed their shirts at dinnertime to avoid spilling on them). Sometimes when we came into their courtyard to visit, a family would change their clothes, asking for an “official” family portrait from our cameras. For some reason, perhaps in their haste, in this circumstance the men were prone to neglect zipping their trousers.

We loved all the children, but were especially partial to Xiu-Xiu, a bubbly, friendly and curious little girl, adorable in her short pigtails and bright red outfit. She was typically the voice for the other children, not afraid to speak up when spoken to … some of the other kids when confronted by us would be overwhelmed with shyness to where they could barely even whisper an answer. Xiu-Xiu drew pictures for all the volunteers (the following year I brought her back a coloring set with pens/crayons/watercolors), and was always hanging around our yao.

I had brought some gifts for the handful of primary school children who were taught in a school in the village (as this gesture had been suggested to all volunteer researchers). (To go to middle school and beyond requires boarding in a township.) I sort of imagined other people would think in practical terms, so I went for things more like treats. My gifts consisted of chocolate kisses and sheets of stickers. The kids had never seen either. I had to coax them to unwrap the kisses, and show them it was candy. Some kids were too shy to attempt an opening, others carefully unwrapped the top, tentatively licked the chocolate with their tongue, and quickly wrapped it back up. I really wonder how long some of those kisses lasted.

I had to teach the kids how stickers worked, also, demonstrating how you peel them off and how they adhere to surfaces. I imagined my gifts would be rare items, that’s why I brought them, but I didn’t actually imagine the children would never even have seen them before. It touched my heart to introduce them to such basic and ubiquitous representations of American childhood and have them cause such wonder. At any given time in my childhood, I probably had a minimum of six packets of stickers in my desk drawer; they were as ordinary as paper.

On our last day, as our team was preparing to leave the village, many of the villagers came to bid us farewell. Xiu-Xiu showed up with one of her stickers thoughtfully displayed on her forehead. A photogenic little girl as it was, this was so sweet and humorous, we launched a camera attack on the poor girl. When her grandmother saw that we were all preparing to take Xiu-Xiu's picture, she hopped over and quickly stripped off the sticker, trying to make her granddaughter look perfect for the photos … obviously she thought a little green frog was a silly accessory.

XiuXiu winced slightly at this alteration – she had clearly taken joy in wearing the sticker – but she kept smiling. “No! No!” we all cried. “Put it back!” We gestured frantically to the ample woman. She was momentarily confused. Then with a mighty laugh that moved her belly up and down, the woman slapped the sticker back on her grandchild’s forehead, a little crooked. 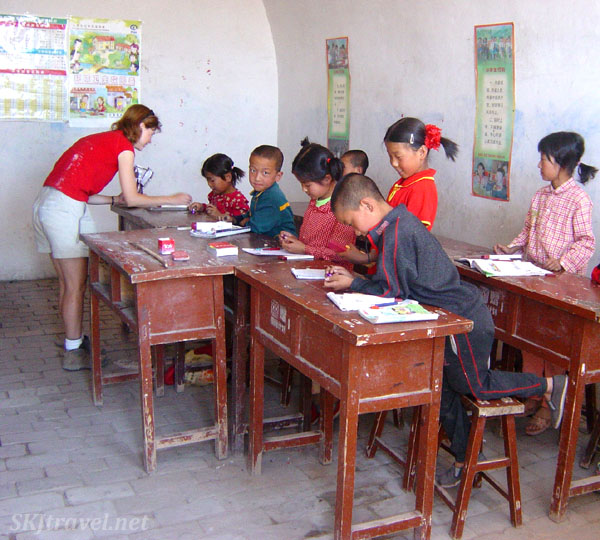 School children inspecting their kisses, Xiu-Xiu standing up in the middle. 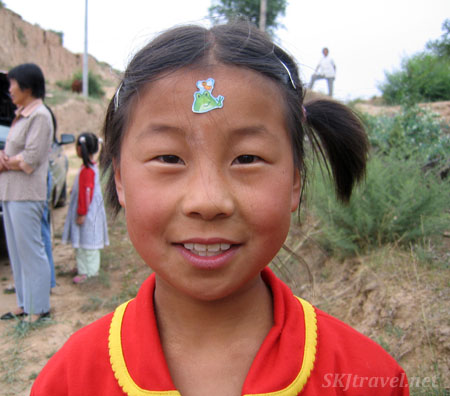