I.  At The Mill. Andante

Out of the deep silence, the first tints foreshadowing dawn creep upon the sleeping Chinese village. Random, unorchestrated noises flutter briefly as the peasant villagers spring awake, stoke the fire in the stoves and step out of their homes, the whites of their eyes like twin moons on their faces, shining in the predawn.

Sisters bridle the donkey and lead him to the stone grinding mill. They sprinkle a layer of harvested soybeans to be crushed into small bits. The scene benefits from the softness of indirect light, the eastern glow that belies the imminence of sunrise.  The sisters coax the donkey along with a swat on the behind.  He pulls the ancient millstone walking blindfolded and muzzled, plodding circle after circle; the women follow, brushing the crushed soy into ceramic crocks to soak in water. The pace of the donkey and the women’s movements are smooth and natural, organic, like the pace of a daylily opening its blossom, timed in natural rhythm to the stride of the sun and the spin of the planet. As the donkey leads the grindstone, a cantata of creaks breaches the silence cradling the early-morning village, as if Donkey is an organ grinder as well:  high-pitched creaks from the friction of stone and wood rubbing against the iron pole holding bedstone and runner-stone together, lower-pitched creaks from the interaction of harness rope, chains and wooden bars holding Donkey and runner-stone together, accompanied by the lonesome clomping of weary hoofs. 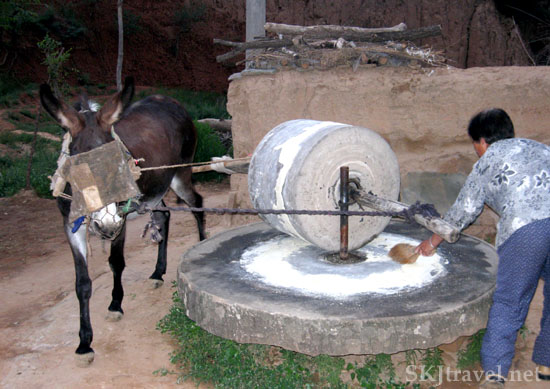 Subtly embedded in this traditional tune, like the ting of a triangle hidden in the lush sounds of an orchestral overture, are the sounds of the village path that passes by the mill and leads down into the valley and to the water spring.  Villagers with tin pails of water dangling on each side of a shoulder pole pass by; old men and adolescent children with enormous packs of alfalfa strapped to their backs; cows pulling carts at the side of their masters; women with baskets of golden-needle daylilies which have to be collected before sunrise if they are to taste good, before the bloom opens up.  Footstep after footstep, shoes made of hemp quietly crush the iron-laden soil beneath them as if they are tiny millstones while the donkey snuffles and crushes the soy.

This is the opening melody for a morning of tofu preparation.

Pause.  While the musicians turn their pages to the next movement and the backdrop is changed for new scenery, I’ll explain myself – the audience.  I was a guest in the tiny hamlet of Dang Jia Shan, a peasant village in the arid loess plateau of northern China. It’s the home village of Dang Anrong, who headed an ethnographic research project in which I volunteered to collect data.  His family hosted us; we lived in a recently abandoned yao – a traditional cave-home – while we documented the ways by which the peasants live their remote, impoverished lives. The primary diet of the northern peasants, day-in and day-out, is millet soup.  But one morning Anrong woke the research team up early. “You must come see how to make dòufu,” he said. I rubbed the sleep from my eyes, stabbed some barrettes into my greasy, unwashed hair, and trundled out into the dim light.  When the sisters had finished at the mill, I shuffled up the hillside, past the bleating sheep, to Papa and Mama’s home. Older Brother in his camouflage jacket, and Papa in his Mao-era blue pantsuit, were mumbling quietly to each other – probably of family and land, for here, there is little else to talk about.

II.  In the Courtyard.  Largo

On a tiny wooden stool, Older Brother sat in the chilly, gray light at an electric grinder with a small vat of coarse soybean slurry beside him. Another deep, wide ceramic bowl lay beneath the chute of the grinder.  Slowly he ladled the beans and water into the machine and it spat out a thick, white liquid. 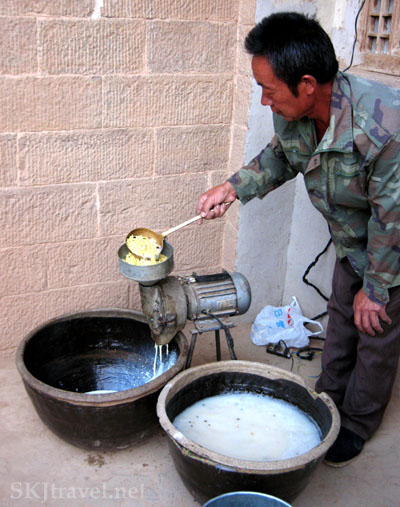 An electric grinder is not cheap (for a poor peasant), and it will be used by a family very seldom. It’s not an investment in their everyday lives; rather, into the most important days of their lives – Spring Festival (Chinese New Year) and weddings.  Otherwise, it’s rare for traditional peasants to make tofu. They don’t just make food willy-nilly, whatever they feel like eating.  Many types of food—particularly pastas, breads, dumplings and tofu—are very specifically prescribed for consumption during, and sometimes only during, special occasions. Many Chinese festivals and social rituals are marked almost exclusively by the preparation of certain foods.  It’s not about particular activities, certain songs or decorations or gifts, but particular foods to eat. An occasion may call for noodles to be served, but a noodle is not just a noodle; it completely depends on what it’s made from to determine its role in the ritual.  For instance, sometimes potato noodles are to be eaten or delivered to a relative, and sometimes noodles made from wheat—they are not interchangeable.  When a holiday is celebrated with jiăozi dumplings (made with pasta-like skins), bāozi (bread dumplings) may not be substituted.

When the bowl beneath the grinder’s chute was nearly full of the cloudy liquid, First Sister (the eldest) emerged from the yao and pulled it aside with her scrawny, aging arms. The roots of her black hair had turned white only along the left side of her part. Though this step of the tofu preparation was what the family was probably most proud of – using a modern electrical appliance – its magic trick was intolerably boring.  I had to walk circles like the donkey to stay awake.

Just as a ray of sun made it high enough in the sky to shine down into the courtyard, Older Brother shut off the grinder and carefully cleaned out the innards. He receded into the background and the women moved in, swarmed briefly and then separated into individual components, working together just as masterfully as a well-oiled machine.

III.  In the Kitchen. Allegretto

I instantly perked up as a whir of human motion took over the yao.  The women set to work with silent efficiency. Mama flared up the fire in the stove, feeding sticks and dried grass into the round hole in the stone countertop, her tiny body, malnourished in youth, fitting in among the other women as if she were just an insect buzzing around. An enormous cooking skillet was placed on the stove with a slatted piece of wood set across the top.  Fourth Sister, her long hair pulled back in a ponytail, took up post at the skillet with a tall, thick metal spoon, almost cartoonishly huge.

First Sister hopped onto the stone stovetop and held a cheesecloth, several feet tall, over the slatted wood.  Older Brother’s wife transferred the ground soy liquid into the cheese cloth. When a large amount of sediment had built up inside it, First Sister used the strength of her whole body to roll down the cloth and press the liquid out into the skillet while Fourth Sister stirred it constantly. 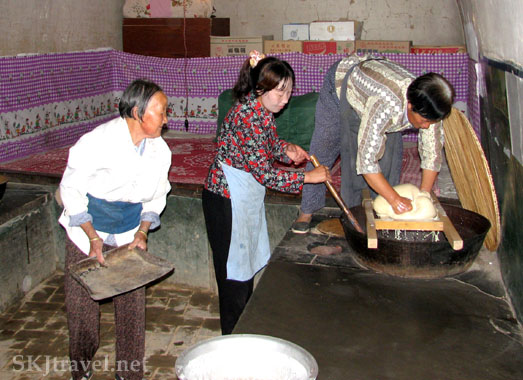 When First Sister was satisfied all the liquid had been extracted, she opened the cloth and pulled out a large loaf of solid material.  I, in my ignorance, thought, “Oh, there’s the tofu.”  No; this was the waste material.  In days past, when food of any nature was a precious luxury, this solid mass would be pressed flat and fried into little cakes.  But times are better now and it’s thrown to the sheep.

Older Brother’s wife pulled out a bellows and stoked the fire, while Fourth Sister kept stirring with her cartoon spoon. The liquid began to boil into a thick froth. Smells unfamiliar to me now pervaded the yao. I could tell that to Anrong and his sisters, they were shadows etched on the walls, memories of the happiest times of their impoverished childhood, a siren of anticipation for an imminent feast. The whisper of the spinning bellows and the rhythmic scraping of the spoon across the bottom of the skillet were the only tangible sounds against the scored silence of the women’s four-part harmony.

The sisters emptied the skillet into a large ceramic crock. Anrong announced, “Now we can drink the milk!” The kitchen bubbled with excitement as Fourth Sister ladled milk into several petite bowls. I couldn’t wait to taste this hypnotic collaboration, the skill and tradition of the four peasant women. After the first sip, though, I struggled to take a second drink.  “Here, try some sugar,” Anrong said as he pushed a small bowl of it toward me. I added a pinch, but it didn’t make it go down easier. I wanted to dump in the whole lot, but I knew that the little sugar bowl, about the size of my hands cupped together, usually lasted the family four or five years. I felt heartbroken as I watched the others licking their lips in satisfaction, and I cursed my taste buds as I gave my portion of milk to someone else.

First Sister now unveiled a slim jar of brown powder. She sprinkled it into the crock of soy milk, added a little hot water and stirred, then set a gāoliáng mat (made of sorghum stalks) on top. She lifted the mat occasionally to stir; the milk was curdling and becoming chunkier by the minute. Just a few pinchfuls of a coagulating agent – magnesium chloride from sea water or calcium sulfate (a commodity purchased in the closest township) – turned a whole vat of liquid into a solid lump. 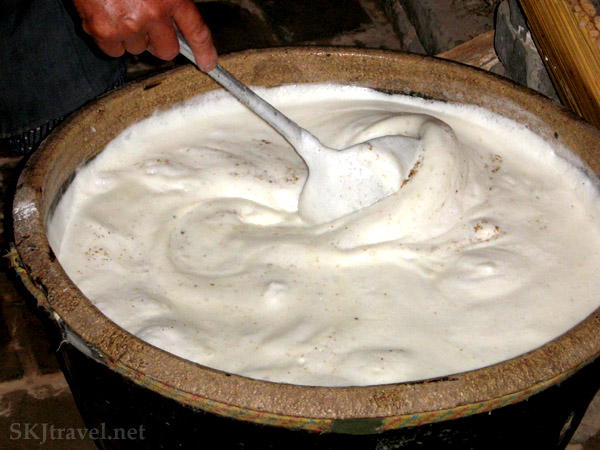 First Sister extracted the mass with a cloth and formed it into an enormous cake on top of a gāoliáng mat. With a hefty cleaver she cut the soft cake into several sections, then transferred each section onto her palm and quickly sliced it into thin strips. In her small, muscular hand, callused, and sheathed in the loess earth of her village’s land, she held up the tofu strips for everyone to see.  She searched our eyes with hers and, finding approval, turned the corners of her mouth up slightly. 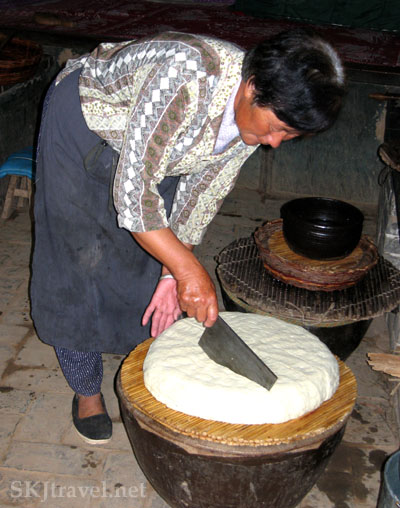 The Audience Applauds. Literally. And the tofu – though merely coagulated milk – was delicious. We ate it for several days: first, in the plain fresh strips; then boiled in a broth with tomatoes, green onion, daylily and egg; then fried in oil so it had a crispy brown skin.  As I stood in the courtyard clapping, it wasn’t only for the women’s beautiful performance, but also for the glee of my own discovery. I felt like a child, a toddler, just stepping out into the world.  A part of me, hovering in some metaphysical realm above my head, looked down and patted my hand, like a mother with her child who’s standing awestruck in the harbor, for he hadn’t realized how toy boats and bottled ships were manifest in the real world.

How to make tofu.