Maine in the Off-Season

Welcome to my first travel post from the good ol’ USA, my home country, which is beautiful and grand but often neglected in my travel tales. Recounted for you here are a handful of the sights we saw in southwest Maine, where Erik and I visited our friends for a week. Kelly was our most excellent guide who planned 7 days of fun activities for us.

As I’m writing this, I’m dipping pretzels into dark chocolate orange sauce I brought home from the Stonewall Kitchen in York, Maine, an evil little establishment that gives out loads of free samples all over the store so that before you know it, you are standing in the check-out line with an armload of jellies, sauces, dips, etc., licking your lips in anticipation of eating them in your own kitchen (or office, as the case may be).

Though it would be pretty to see Maine in the summer when it is full of leaves and blooms, we also learned the Ogunquit area will be similarly full of tourists. We saw the huge beach parking lots and heard the tales of hours of waiting for popular restaurants. But we had the pleasure of walking the beaches in near solitude, spending quiet time with the seagulls and waves … always a refreshing activity. 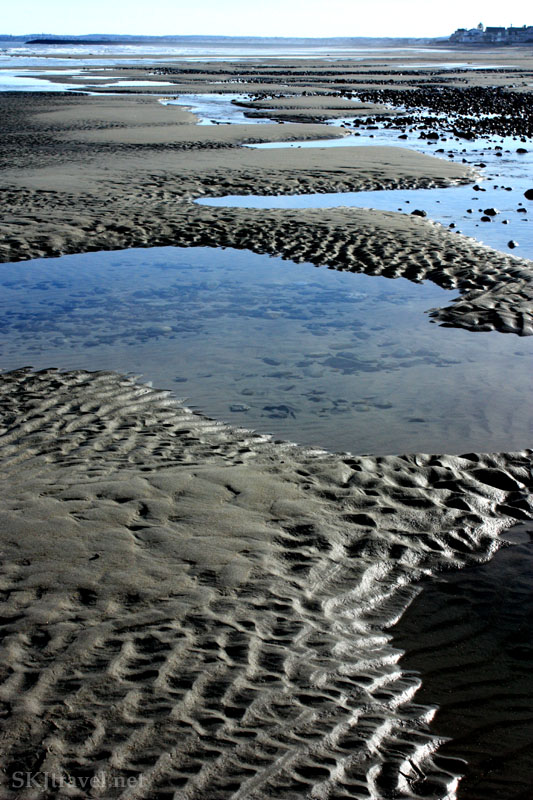 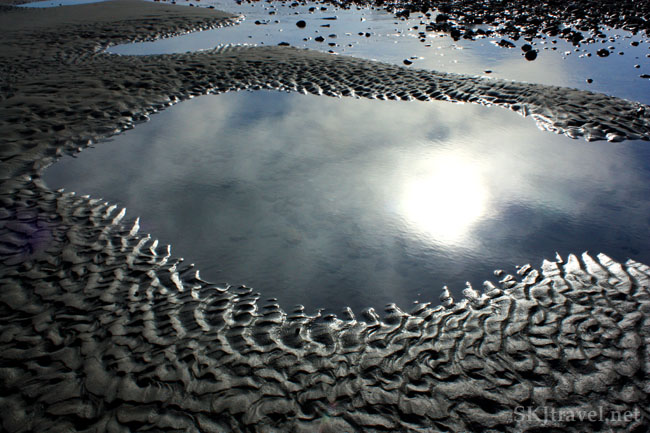 Also took the time to watch the snails make tracks in the sand. I found this very entertaining. In Mexico I like watching the crabs skitter around on the beach; I don’t think I’ve ever taken time to watch snails lumber along. They made an extensive network of paths, and watching one individual for awhile, I found they moved a little more quickly than I might have imagined. It’s interesting watching their little antennae things move around, their strange squishy foot glide through the wet sand. Ocean critters are really so fascinating. 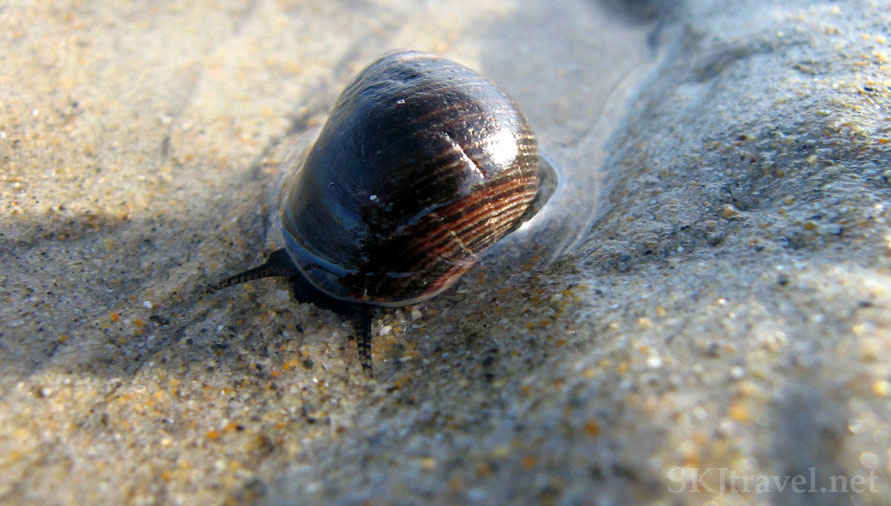 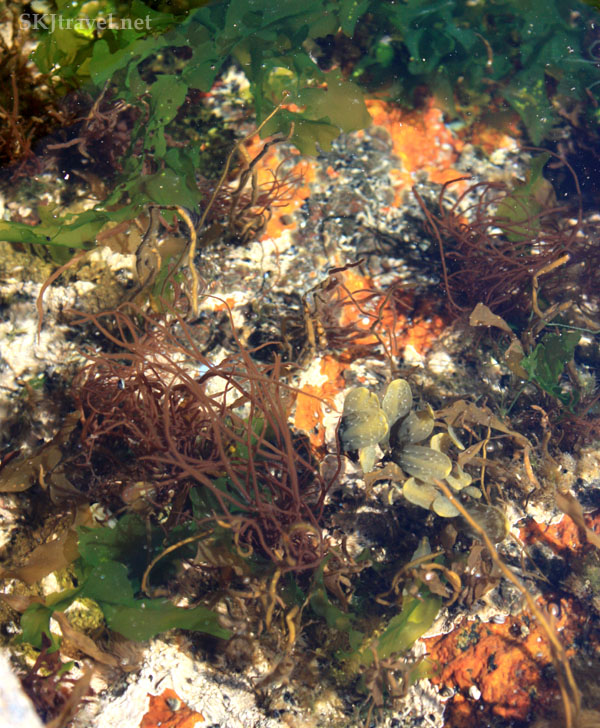 As well, we were mostly by ourselves walking a variety of nature trails. This one around Mackinaw Island has an area designated for fairy houses. Anyone can build one, but it has to be out of only natural materials less than three feet in length. I’m kind of inspired now to go build some in the forest next to my house where I take my kitties for walks. (If you are a Facebook friend of mine, you’ll know this is a regular activity my felines and I engage in.) 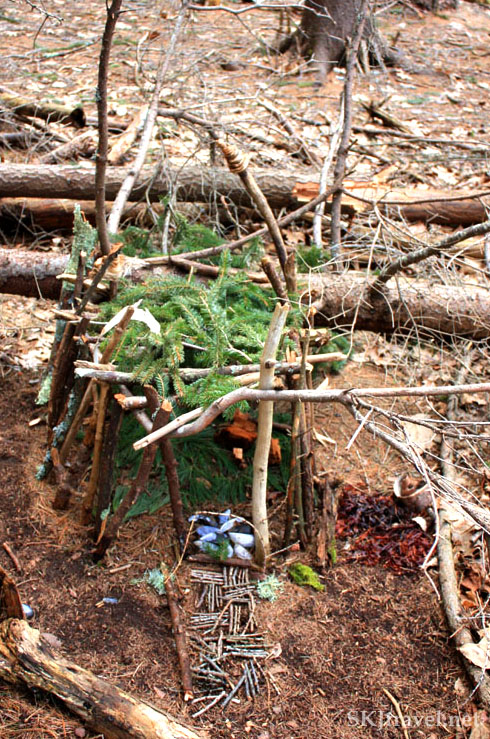 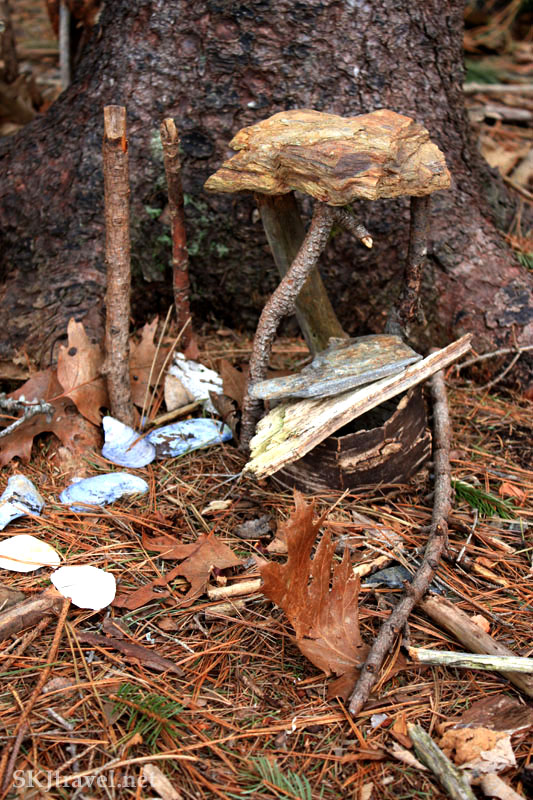 Also on this trail is a small pet cemetery where a former governor buried his beloved horse and a large number of dogs. 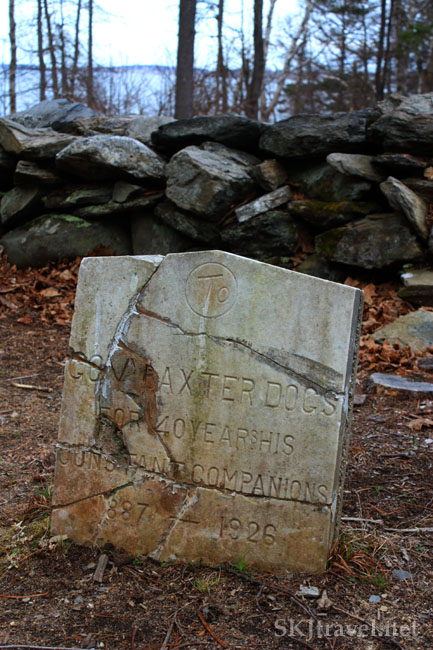 Another unique stop on the itinerary Kelly planned for us was a Lithuanian monastery, St. Anthony’s. The outside of the building was quite traditional, but the interior was beautifully and tastefully modern, abstract and complex. So much more contemplative than your typical cathedral rose window. I didn’t take any photos inside … there was a man praying in the pews and I felt it would be intrusive, especially since I had the DSLR which makes such a resounding shutter click. (My beloved little G9 bit the dust and I have to get a new one.) There is also a lovely nature trail on the grounds which includes several grottoes and statues, ponds, benches, and contemplative spots. In the midst of a bustling tourist mecca along the southeast coast, it really seemed a quiet spot of refuge. 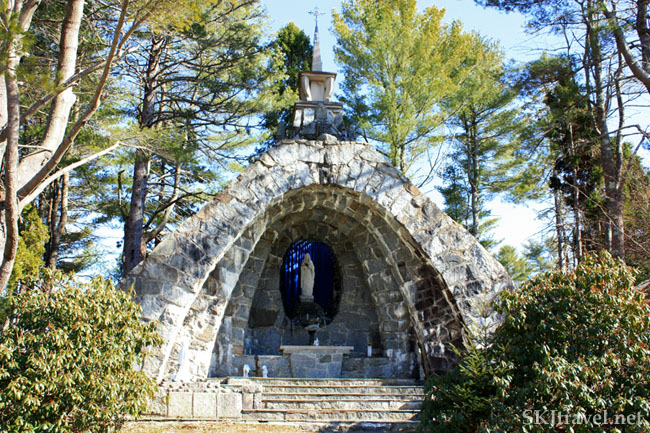 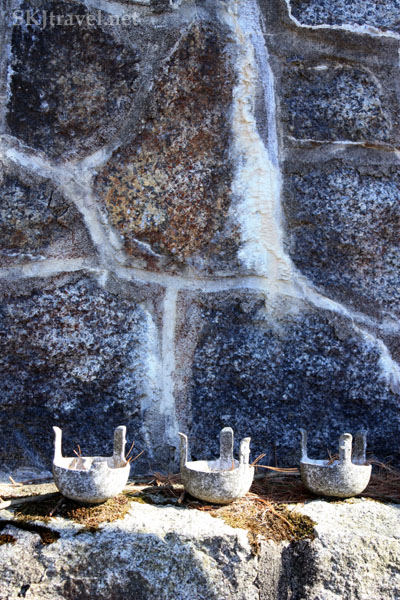 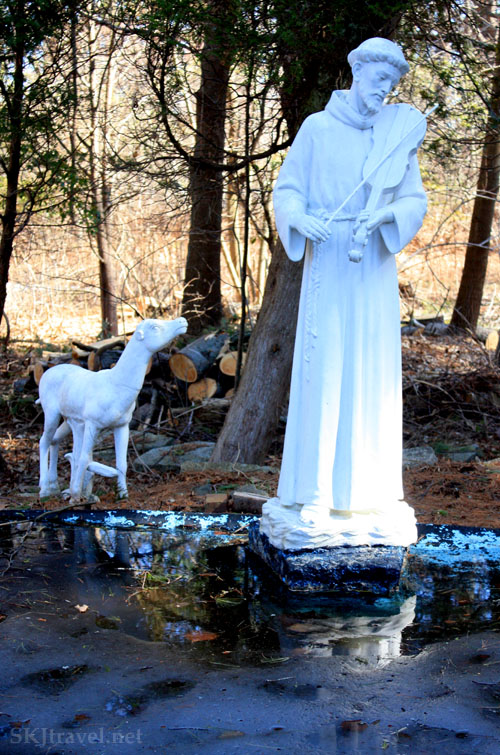 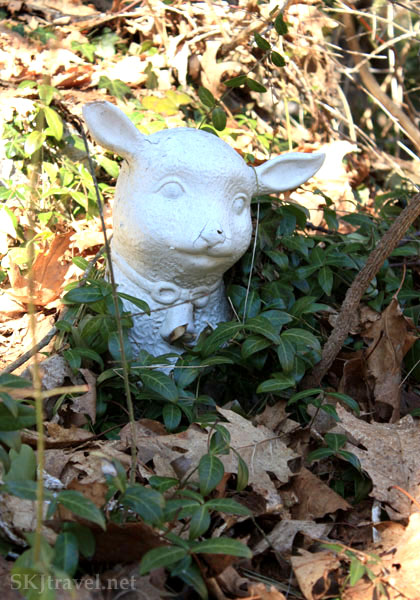 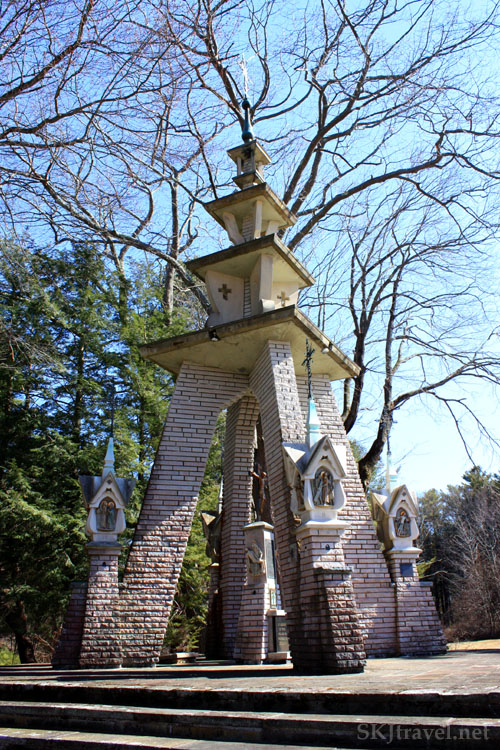 If you read my blog posts with any regularity, you’re surely aware that beer and I are very good friends. Trying new beers and enjoying my favorites are two of my most beloved activities. Maine is an excellent location for a person with such an interest in beer. Many local breweries serving up a nice spread of different types, provided ample tasting opportunities. Of the ones I tried, I settled, as did Erik, on Gritty’s out of Portland as our favorite, both in the grocery store bottle and the draft in the pub.

My favorite activity in Portland was the Portland Museum of Art. For a relatively small city, it’s an impressive collection of top-notch art from the most famous masters to Maine locals. My favorite was a featured exhibition of black and white photography documenting the lives of migrant workers on blueberry farms, harvesting by the traditional method of “raking.” Though the photos were taken in the last several years, they are spookily reminiscent of Dust Bowl era photos. The Blueberries of Wrath, instead of The Grapes of Wrath. The blueberry rakers lead a life of back-breaking labor for the privilege of existing in near poverty. I’m not entirely sure I can enjoy blueberries the same way I used to.

Naturally, we visited a variety of lighthouses. 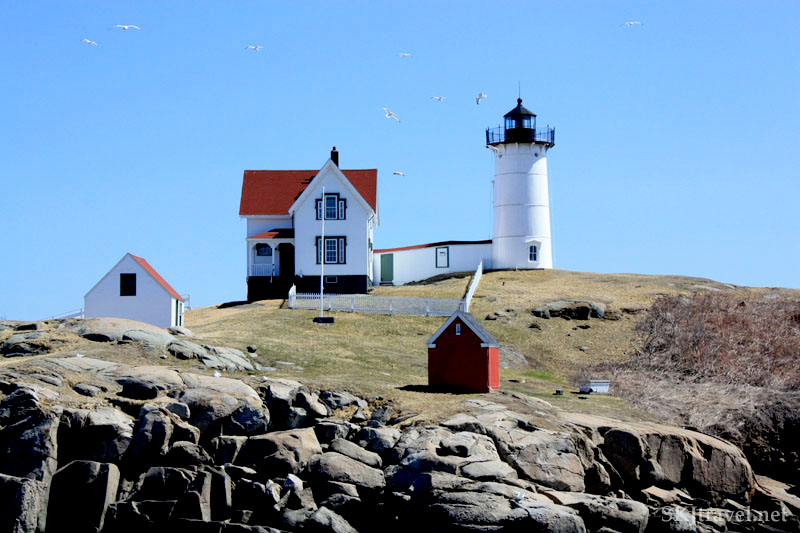 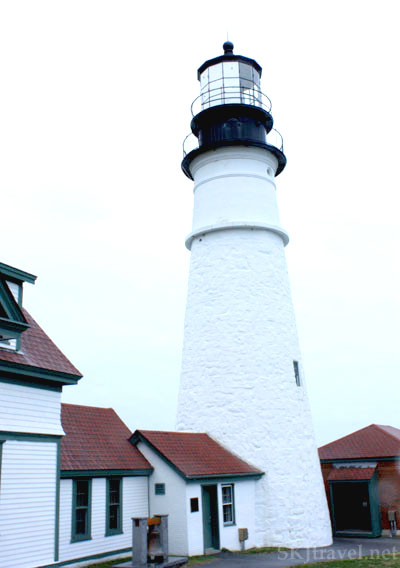 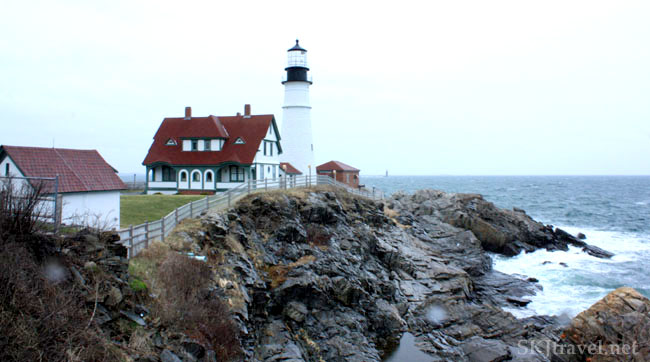 We also took a day trip by train to Boston, a city I had never visited. My friend, Cindy, was our most excellent and competent guide here, bee-lining us to her favorite features with an efficiency that allowed us to see much more of the city than we would have wandering around on our own. 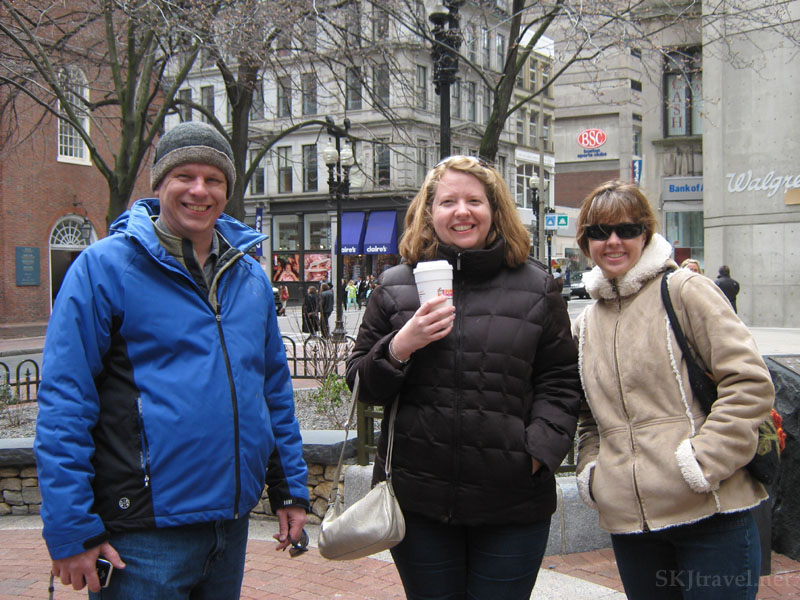 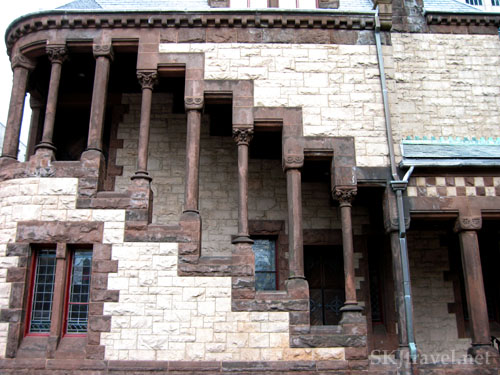 These are from the Boston library, my favorite of the buildings we visited.

From an exhibit in the library composed of dioramas. A dying art, I think. 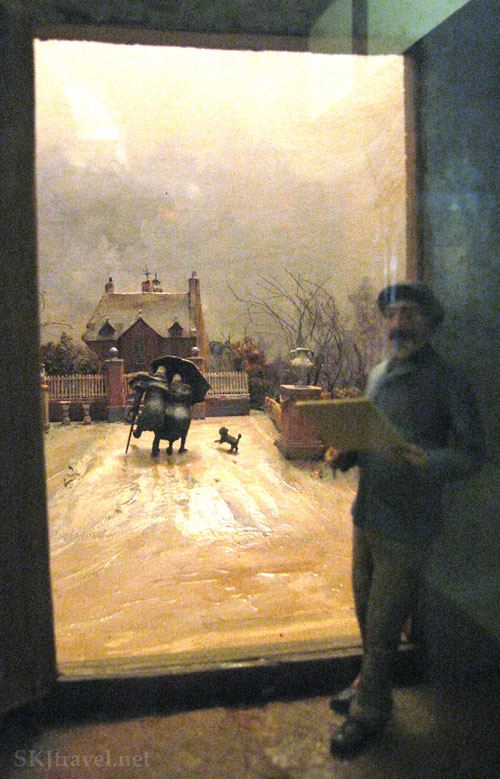 Of course, we had to swing by the “Cheers” bar of the television series fame. Cindy and I pose with a huge post of the cast. 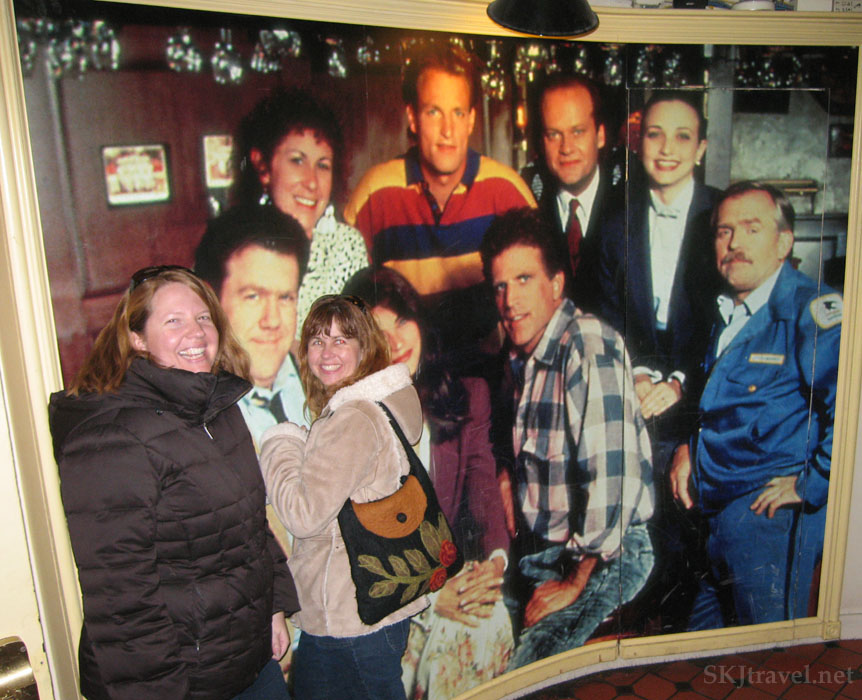 My favorite sight overall was this small cemetery in the middle of the city containing the graves of several famous Revolutionary historical figures and many graves from the early and mid-1700s. Interesting to me was some of the spelling … as some words were still spelled in an older English style, for example, “Here lyes So-And-So” rather than “Here lies.” At first I was a bit creeped out by the tombstone iconography, which I had not realized was the traditional graveyard iconography of the day, the skull-and-crossbones and the skull with wings. Now everything is all froofy angels and lambs. Maybe I have a darker soul, but I rather like the simplicity and the acknowledgement of the stark truth of our earthly existence exemplified in the skulls. 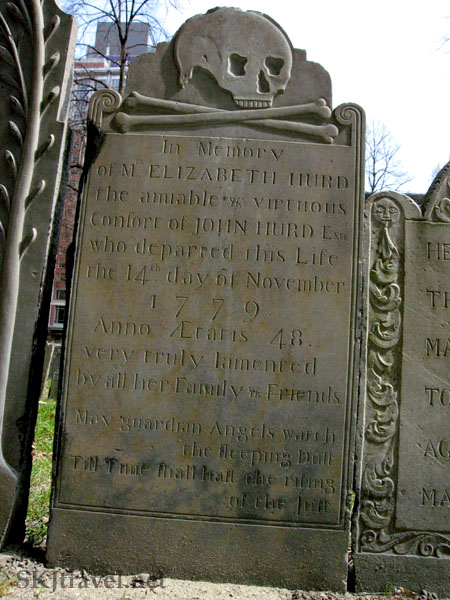 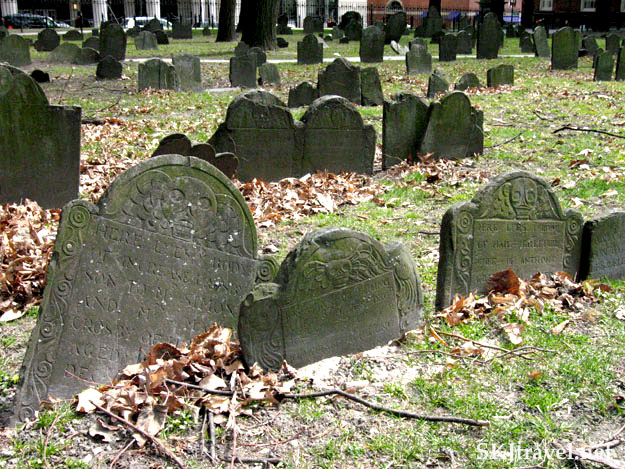 The most amusing thing to me was the Old State House which once would have been viewed as a somewhat grand building but now is almost comically dwarfed by the modern buildings surrounding it. Outside the state house is where five people were killed in the “Boston Massacre” of 1770. Honestly, I didn’t know five people constituted a “massacre.” But the funny thing, which I cannot really explain to you, is the hand-painted sign of an 1800s feel inside the state house on the second level above a window which overlooks the area where the colonials were killed. It says, “Boston Massacre Site. View it here!” It’s like an old traveling circus sign pointing to the side show freaks. Maybe the humor is all manifest in the exclamation point, I can’t really say. But, rather tastelessly, I couldn’t stop chuckling (at the sign, not the historical event).

But back to Maine, we took some lovely walks along the beaches, both sandy and rocky, including this one along "The Marginal Way" not far from where we were staying in Ogunquit, ending at Perkins Cove. Lots and lots of seaweed, piled up at low tide in extremely thick, squishy masses. I was fascinated again with the snails, this time making their way up delicate strands of seaweed. Also lots and lots of seashells here. It happened that I'd bought myself a little birthday gift in Perkins Cove and so had a bag with me, into which I dropped a few fistfuls of shells carefully chosen from the piles among the rocks ... collecting seashells is one of my favorite activities. To some degree I don't even care if they make it back to Colorado with me, I just enjoy looking, finding and inspecting, and there is something important about the actual collection into a bag or bucket or what have you. But after that, it doesn't matter so much what happens to them. 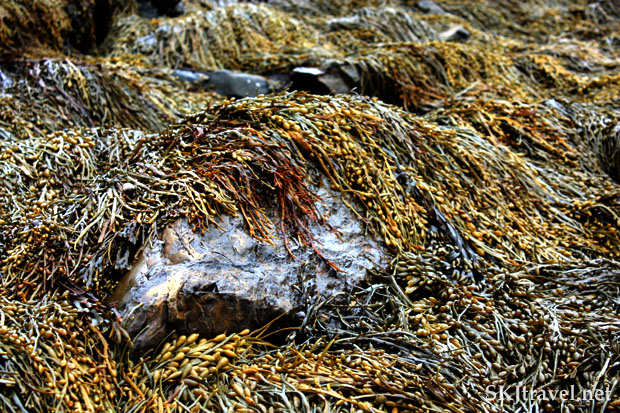 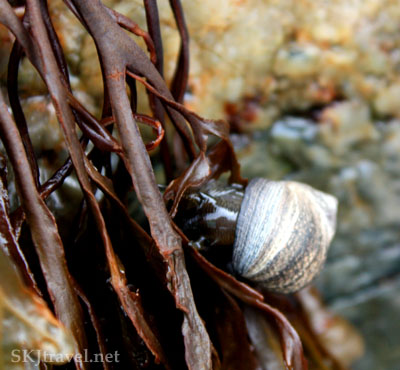 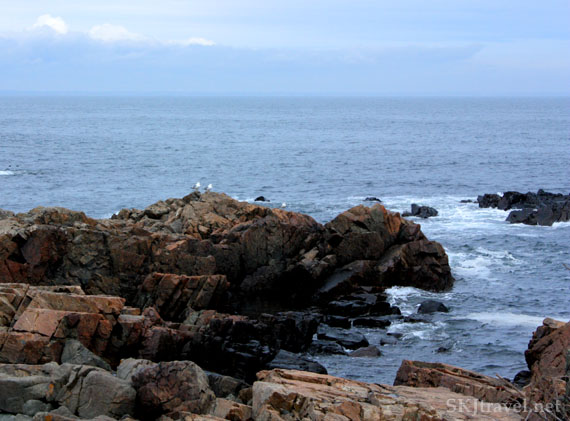 Knowing how much I love waterfalls, Kelly was determined to show me at least one. A very short walk through the woods near Westbrook brought us to this sweet tumble of water called Jewel Falls. 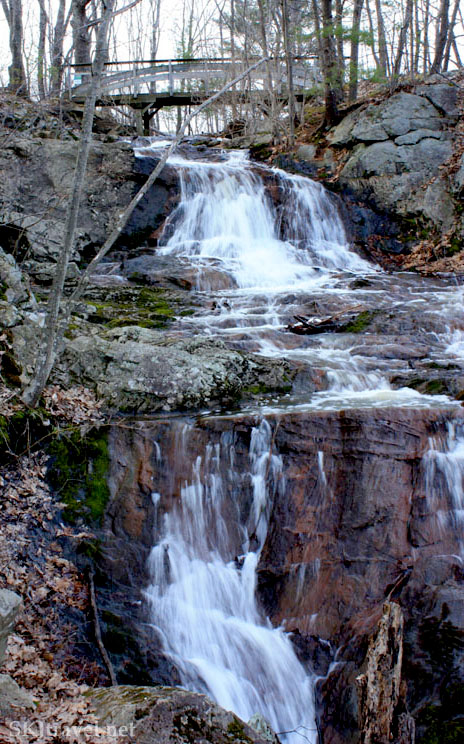 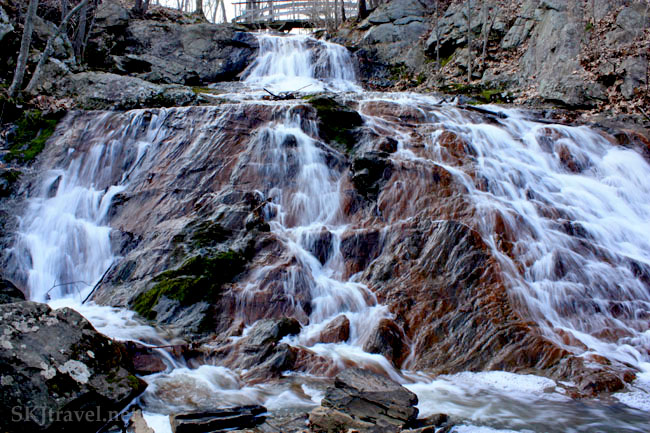 Many thanks to Kelly for planning a lovely itinerary for us in coastal Maine. 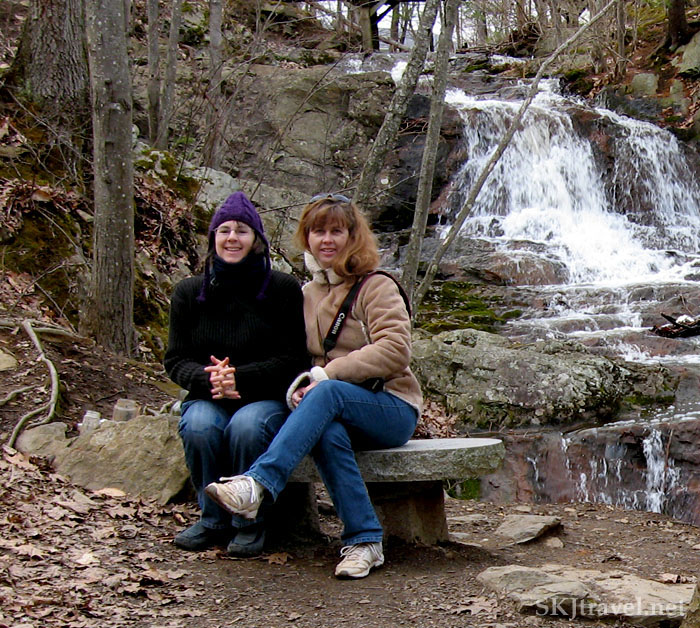