Secrets in the Earth

It was a moonless night. Only pinpricks of stars betrayed him, as if someone had cut holes into the fabric of the universe, allowing lanterns in another realm to cast feeble shafts of light. They were too far away, he was sure, to trouble him. The path was as familiar to his feet as the inside of his shoes.  He opened his eyes not to find his way, but to keep guard over his intentions. His hemp-and-cotton footfalls made no noise on the packed-dirt path as he climbed the hills and walked along the plateau southeast out of the village, with a shovel over his shoulder, past the tiny village temple where five times he had prayed to the Dragon God’s mother for the health of his children. Ridiculed by the tide of the Cultural Revolution, her painted portrait chipped from the walls, now the Holy Mother had only sheep in her holy presence, and one sullen eye left to mourn the world.

When he arrived at his family’s cemetery, now three generations old, he stood before his grandfather’s grave. The top of the headstone was level with his shoulder. He ran his fingers over the brown stone scales of the exquisitely carved dragons, their bodies entwined with one another, twisted sentinels over the bones.  He pushed his fingers, sheathed in the earth he’d worked for a lifetime, through the holes in the tombstone where the two dragons’ tongues met, where in the day the dusty sun shone through. In traditional Chinese culture, only highly esteemed members of society may have holes in their tombstone. Grandfather had been special, an elevated man who wore a red hat – a learned man in a land a simple peasants.

The weeds in the small graveyard were thick – tall and tangled, and the years had grown a dense mat of death, commemorating centuries of seasons coming and going. He squinted in the dark, looking for a place where the cover was thinner. Once he forced the shovel through the organic debris, the dirt itself yielded easily; it was powdery and pliable, landing with a soft, dull thud as he threw it over his shoulder. The hole when finished was as long as he was tall and a couple feet deep.  He sat down for a moment to regain his breath. A cuckoo bird called from the west, as if to remind him dawn would wait for no man. He stood.

Then Papa, alone in the night, lifted the 220-pound tombstone and laid it flat inside the hole, the dragons facing down, licking the earth with their stone tongues. The chiseled list of descendants’ names was now choked with the silt that had blown relentlessly down from Mongolia, building the mantle that held the roots of trees and the bones of ancestors.

He shoveled the pile of dirt back into the hole, gathered the weeds and spread them on top in a new mat, tried to blend it in with the other plants so the ground wouldn’t look disturbed.  He walked back home and slipped silently underneath the quilt beside Mama on the kang.

Safely hidden now, the Red Guards would not destroy the tombstone.


Papa with the tombstone, dug up and resurrected after the Cultural Revolution had safely passed. 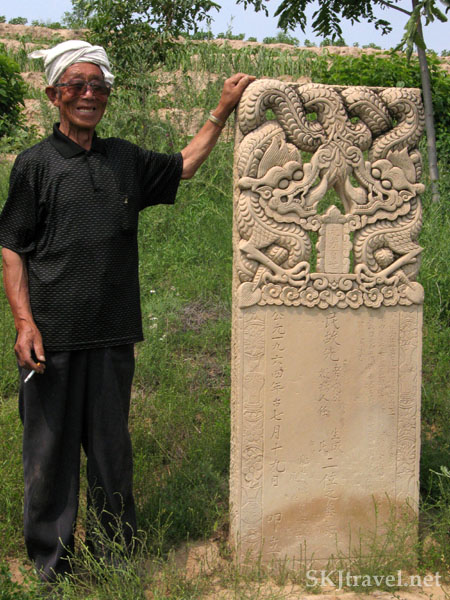