With the Warriors ... Meeting the Qin Terra Cotta Army and Other Sights Near Xian

So yesterday was very exciting for me.  I got to cross off one of the want-to-see-before-I-die things.  Something I've wanted to see for as long as I can remember, since I learned about it in high school, is the Qin Terra-Cotta Warriors.  It's been on my top-5 list (which is an impressive place to be since the number of things on the full list is like 284 or so).  And now I have seen it! [I'm just assuming everyone knows of the terra cotta warriors; it would take quite a bit of time to type out a sufficient explanation of their existence and purpose, so that’s what Google is for.]  Of course, different things appeal to different people, and I'm sure a lot of people wouldn't rate this sight so high, but I was not disappointed when I finally stepped into the building, overlooking Pit No. 1.  I just think it's marvelous. 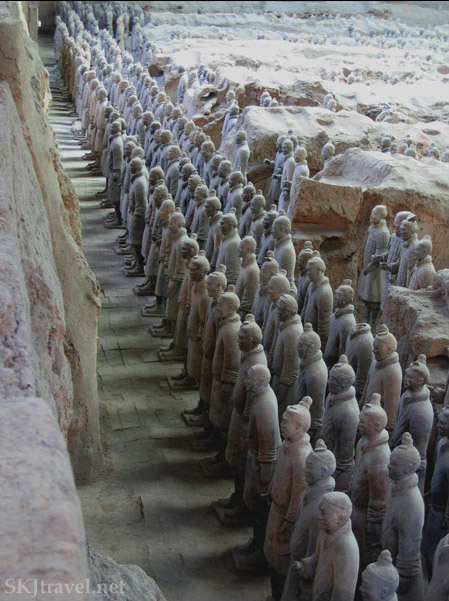 One thing I had not known, is that only one warrior so far has been found 100% in tact.  Actually most of them are broken in numerous pieces and have to be meticulously put back together. 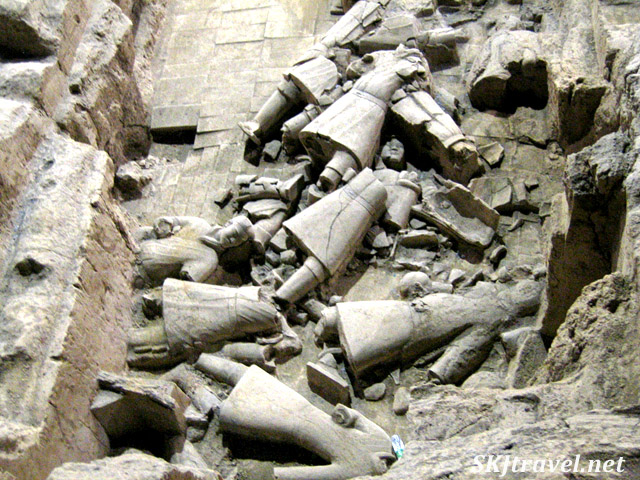 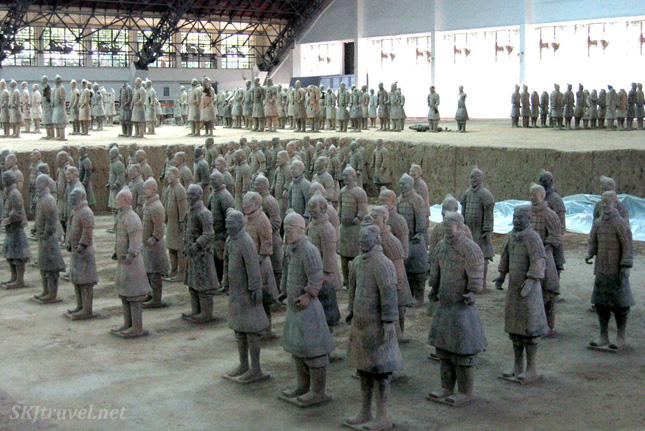 Also, when the soldiers are first uncovered, they often still have pigment on them, as they were originally colorfully painted, though now we mostly see them as just brownish gray.  After only a brief time of being exposed to the air, the colors fade, and the archaeologists don't know how to prevent that from happening at this time.  So they have reburied many of the warriors to preserve their color until a method can be invented to prevent it from fading.  There are huge mounds of dirt with plastic sheeting, where they have covered up what they had once been excavating.  So when they can figure that out and start unburying and restoring the rest of the warriors, I will have to come back, as this spectacle will resurface in my top-5 list.  After seeing Pit 1 and then moving on to the other two pits that are open to the public, and then going through the museum, where they have some marvelous bronze work displayed, I came back to Pit 1. By then, the crowds had cleared out, and only a few other tourists were in the building, so I could spend some "quiet" time with the warriors, emperor Qin, and the past. 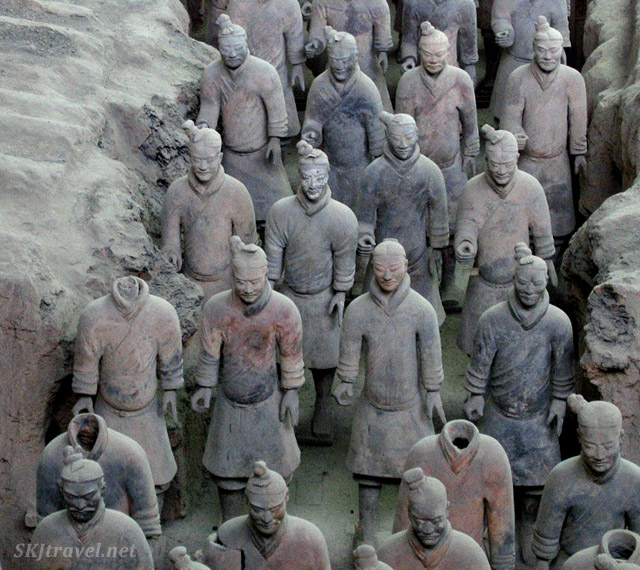 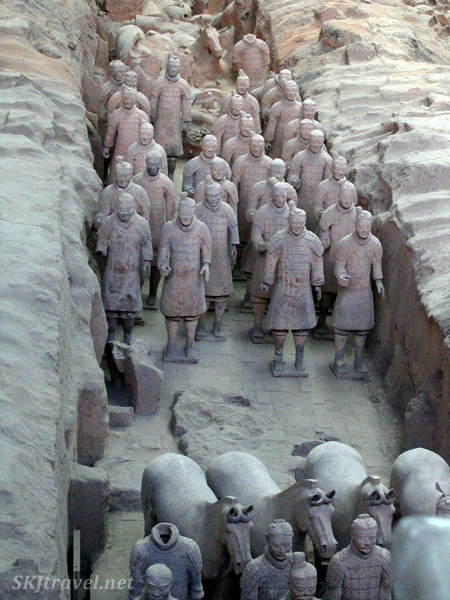 I went to the site as part of a full-day tour of the eastern outskirts of Xi'an.  The other 10 people on the tour were very nice, from Australia and parts of Europe.  But I remember now why I do not like guided tours.  I had to pretty much sprint through the sites to see everything in the minimal time allotted by the tour.  The only places where we were granted ample time were (1) the terra cotta factory where they make replicas for sale and where they sell lots of other stuff, and (2) at the restaurant for lunch, which also happens to have a large souvenir section. At the factory -- one of these things is not like the other ones ..... 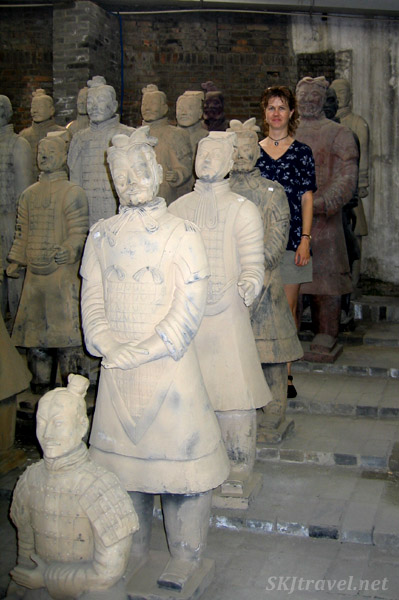 I would rather have spent much more time inspecting the pieces in the museum, many of which were made from bronze. 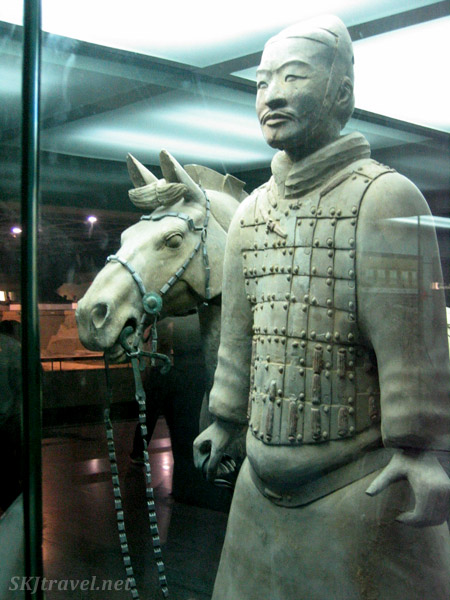 I was so excited to talk about the warriors that I haven't mentioned yet the stops the tour made en route to them. One was the Big Wild Goose Pagoda, where there was a remarkably huge and elaborate jade-carved mural. I had no idea that the jade stone came in a rainbow of colors, I always thought it was just green. I was fascinated and could have studied it for an hour by itself.  But being on a tour, If I took any time to deeply inspect something, I then had to quite literally sprint through other exhibits/buildings in order not to miss my bus.  Oh well. I certainly could not have driven my little ol' self around China!  I still had a really fabulous day. 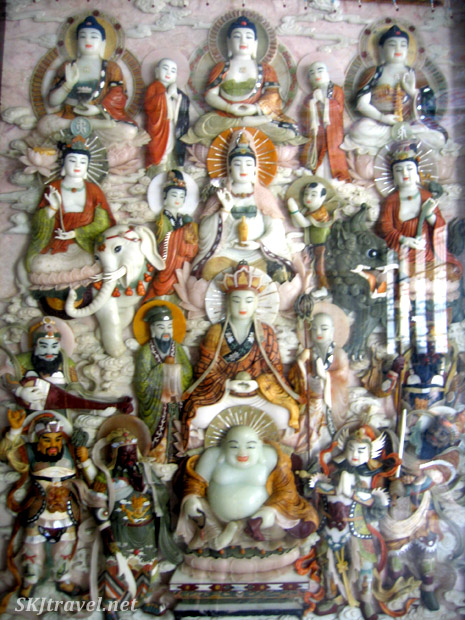 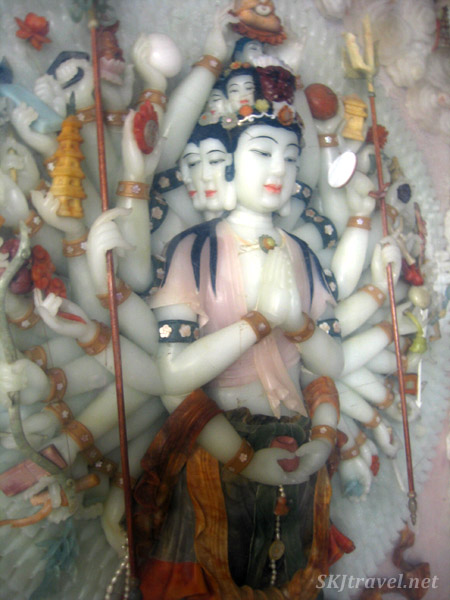 Another thing I'll just mention quickly if I haven't already, is if you ever get pushed into a time machine and are thrown far back in time to China, try to get a job as a concubine.  That is where it's at.  All of the cool buildings and hot springs and gardens were built for concubines of various royalty to play in.  And try to be one of the few of the emperor's favorites, like in the top 30, because that's where it's REALLY at. Here is one of the pleasant hot springs near Xi'an for said ladies. 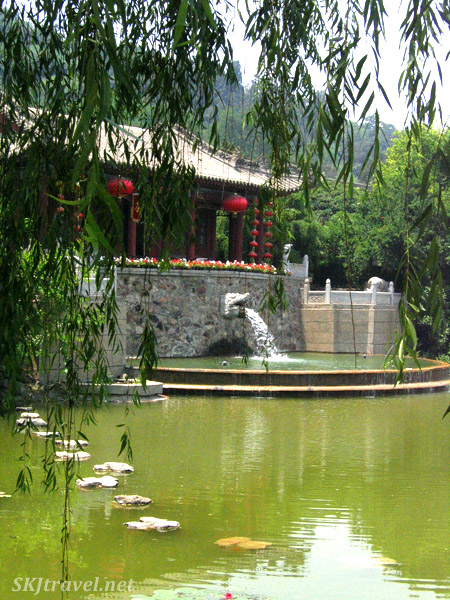 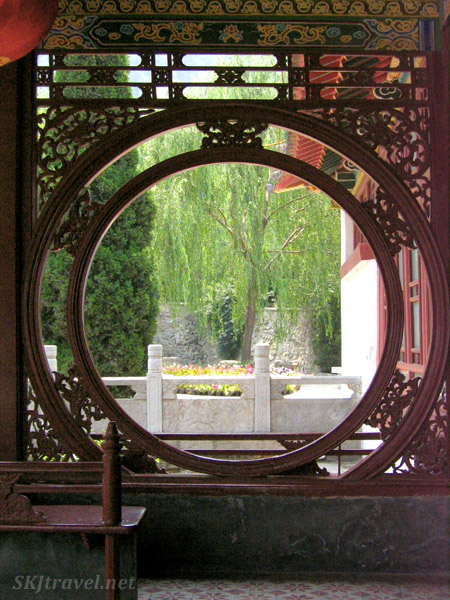 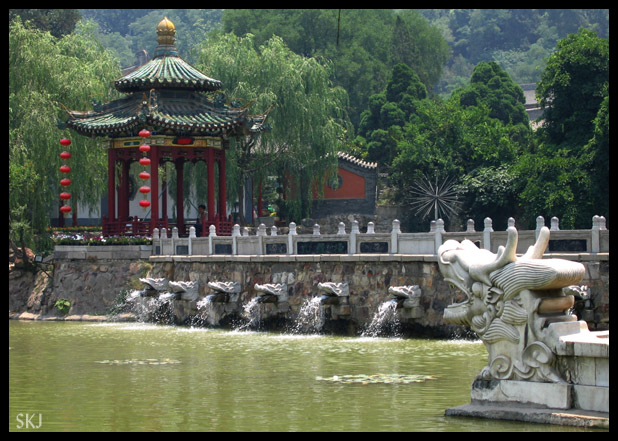 After I returned to the city, I walked through another souvenir market and picked up a couple things for myself.  Some kind of large and heavy things (a tablecloth and some teapots).  So far I've just picked up things for myself that I've seen while sauntering through.  For me me me.  I was going to go Christmas shopping tonight.  However, I have discovered a grave miscalculation, which is the price of shipping back to USA.  I should have researched this first.  I decided to send off my souvenirs today to try out the hotel's advertised parcel wrapping and shipping assistance.  They were great about that and sent my stuff off to the post office.  Then they called my room this evening to tell me the price the post office came up with.  They were nice enough to hold off with the mailing until they OK'd the price with me.  It's astronomical, in my opinion, and the whole point of buying dirt-cheap souvenirs would be utterly eradicated by paying the shipping cost.  Soooo...  (1) it will be a real drag dealing with my luggage for the rest of the trip (I don't even know how I'm going to stuff everything in yet), and (2) I'm afraid I won't be going Christmas shopping (unless I can find some very tiny items).  I was kind of looking forward to some more bargaining; I find it to be like a game.

But I think I haven't told you yet my favorite thing in Xi'an:  the evening kites.  The center of the city is at the Bell Tower and Drum Tower (self-explanatory buildings – the original bell weighs 16 tons and is enormous, and the drums are large, too); both are ancient buildings with four cardinal arms of cheezy Vegas-esque glitz radiating  from them.  In a plaza between the two ancient towers, which has lots of flowers in it, each evening the kite vendors come out and people are flying very long streaming kites all over the plaza.  So as the sun sets behind the Drum Tower in the pleasantly-cool evening, the very slight breeze picks up tens of kites and pulls them up into the darkening sky.  It's really quite magical. 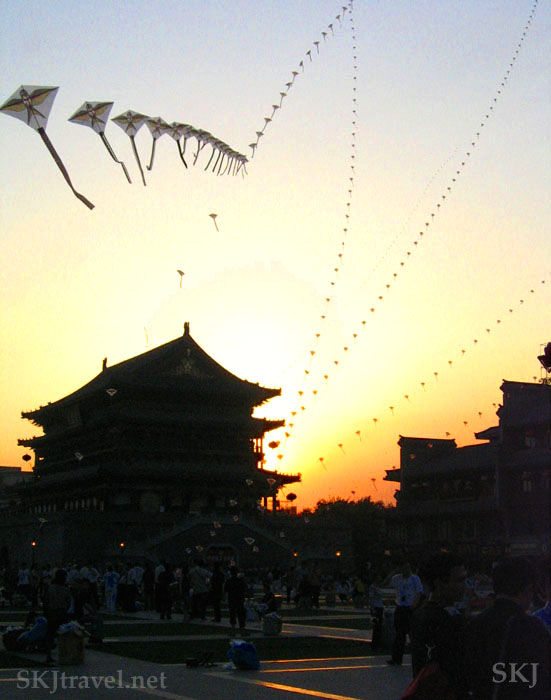 Today for some reason I thought that despite the blistering midday heat (one wonders where my thoughts come from sometimes) it would be a good idea to walk a portion of the city wall.  The Ming-era square city wall still encircles the city center, with a perimeter of approximately 10 miles.  I decided to walk from the south gate to the west gate.  I also decided to eat my lunch up there.  And the green things I thought were maybe bell peppers in my sandwich-thing I bought off the street were in fact hot peppers.  So I sat in the sweltering heat eating fire.  Good times.  (ha) 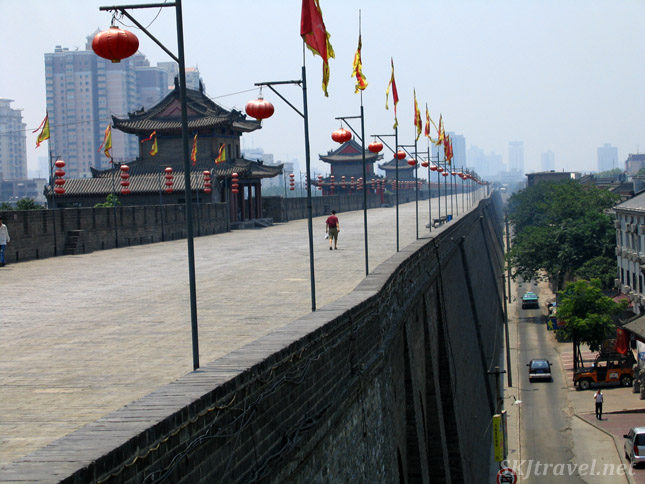 Oh, and I know people are often laughing at me for some of the things I take pictures of.  But today, I saw a Westerner taking a photo of a clothing-store mannequin.  This really cracked me up.  A mannequin?  Then I looked closer and realized the mannequins were actually kind of funny because the men had their plastic hair sculpted into ancient hairstyles like the terra cotta warriors have with the big, knotted buns (topknot) off-center on the top of their head, while wearing today's latest fashions.  But at first sight I thought, “that lady's even weirder than I am.”

I can't believe how long it takes me to type these things, even though I'm just spewing things out off the top of my head.  In just a few minutes I have to go meet some of my fellow expedition volunteers who have now checked into the hotel here also (I had drinks with two of them last night; another arrived today).  We're going to dinner together.  So my main thought for Xi'an, is that when I first got here, I was a wee bit annoyed at the glitz, the flashing neon signs, the pounding techno music coming from the fashion clothing stores ...  because this city is such a pillar of the past.  The beginning of the Silk Road, the mecca for traders, and primary port city for the import and export of religions and ideologies, the capital of China for many many years, home of Emperor Qin who first united China.  And now it's all modern, like any other city of 7 million inhabitants these days.  It's oozing fad and fashion, modernity and progress, edges of technology.  But I've come to think that to deny Xi'an all of this modernity is to deny it it's true character and to erode its pillar.  I can't begrudge an ancient city for continuing to exist in the present.