China Welcomes Me: The Great Wall

Welp, here I am.  It's Monday night here.  I arrived in Beijing on Saturday evening without much fanfare.  The hostel I'm staying at provided me with transportation from the airport, which was terribly convenient.  I went to the hostel cafe and met a few people who were going to the Great Wall the next day – the hostel provides transportation to a more remote section of the Wall every other day, and so I signed up, and then had to go out looking for some food to pack for breakfast and lunch.  So I headed off into the wild blue yonder.

My first foible was pretty funny – I feel like a right idiot about it, but all in all it was amusing. So I'm at this fruit stand buying apples and the vendor tells me Y4.8.  (And I'm excited because I understood what he said.)  So I hand over a 5 note. And he says "No.  4.8"  I hand him the 5.  "No," he says and punches 4.8 into a calculator and shows me the numbers.  "Yes," I say and hand him the paper bill with 5 on it.  He starts getting all upset and pushing my money back at me, and I can't understand what he's saying.  Confused, I say, "Too much or too little?"  "Too little," he exclaims, and I examine my bill that clearly says 5, which is clearly enough money to cover 4.8.  So we go through that scene a couple more times, and finally he just puts my money back in my hand and starts tending to some other customers standing there.  Those customers were very sympathetic toward me and one of them pointed out the word jiao on the bill and then I realize what an idiot I've been. I had forgotten that Tao (my Chinese tutor) had told me that the smaller values of money also come in paper form.  (Smaller value than what would be equated to a dollar bill.  Most countries I've been to, anything smaller than a "dollar" comes in coin.)  So here the jiao comes in 1 and 5 in paper (analogous to dimes and 50-cent pieces). So I had been offering the vendor 50 cents instead of 5 dollars.  I was able to rectify the situation then, and I got my apples.

In traveling tradition, I got up way earlier than I ever would at home to take the bus to the Great Wall.  (We left at 6:30am)  The portion we were taken to is about a 3-hour drive outside of Beijing, and is not much visited by tourists.  We walked a 9-kilometer section of the wall between Simatai and Jinshanling.  To my relatives who did this same stretch, you will be jealous to know that it was an overcast day with an occasional breeze.  Still, it was exerting and hot.  Though the distant mountains could only be seen in outline, I think the tradeoff for cooler weather was worth it.  It would have been brutal beneath a full bright sun. 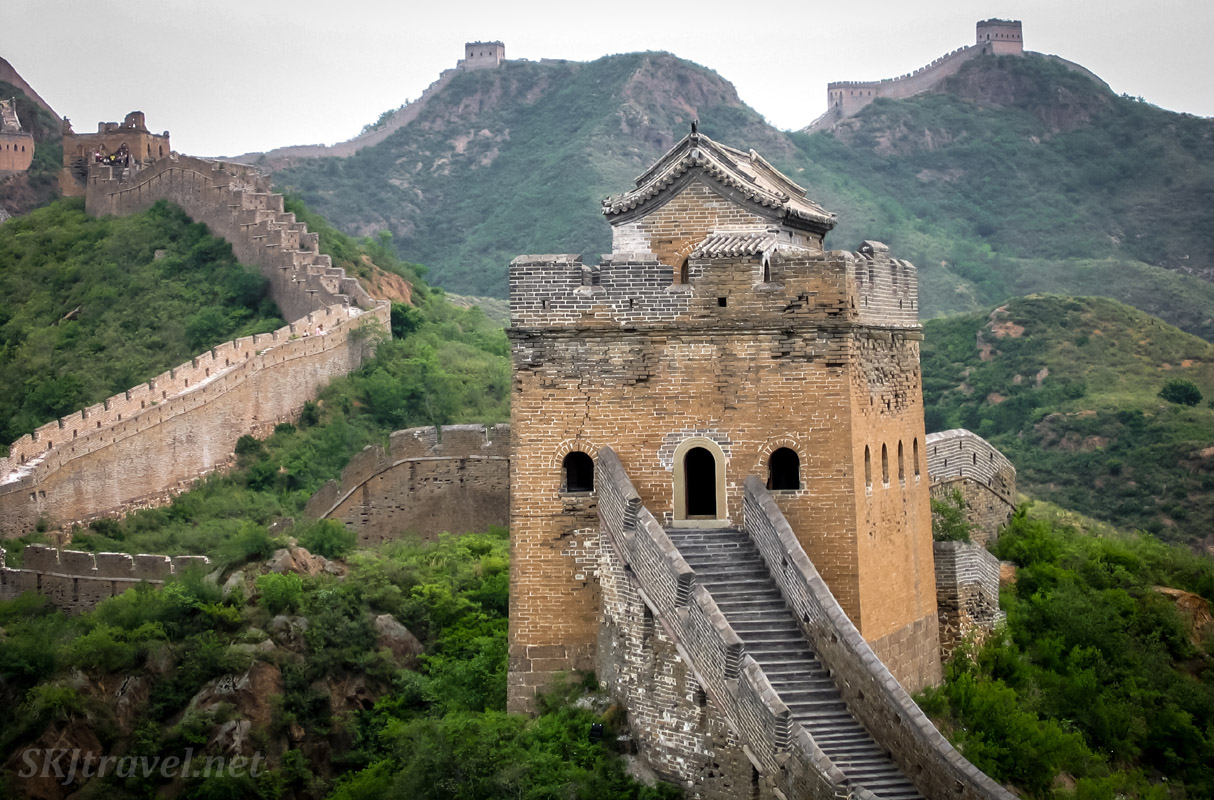 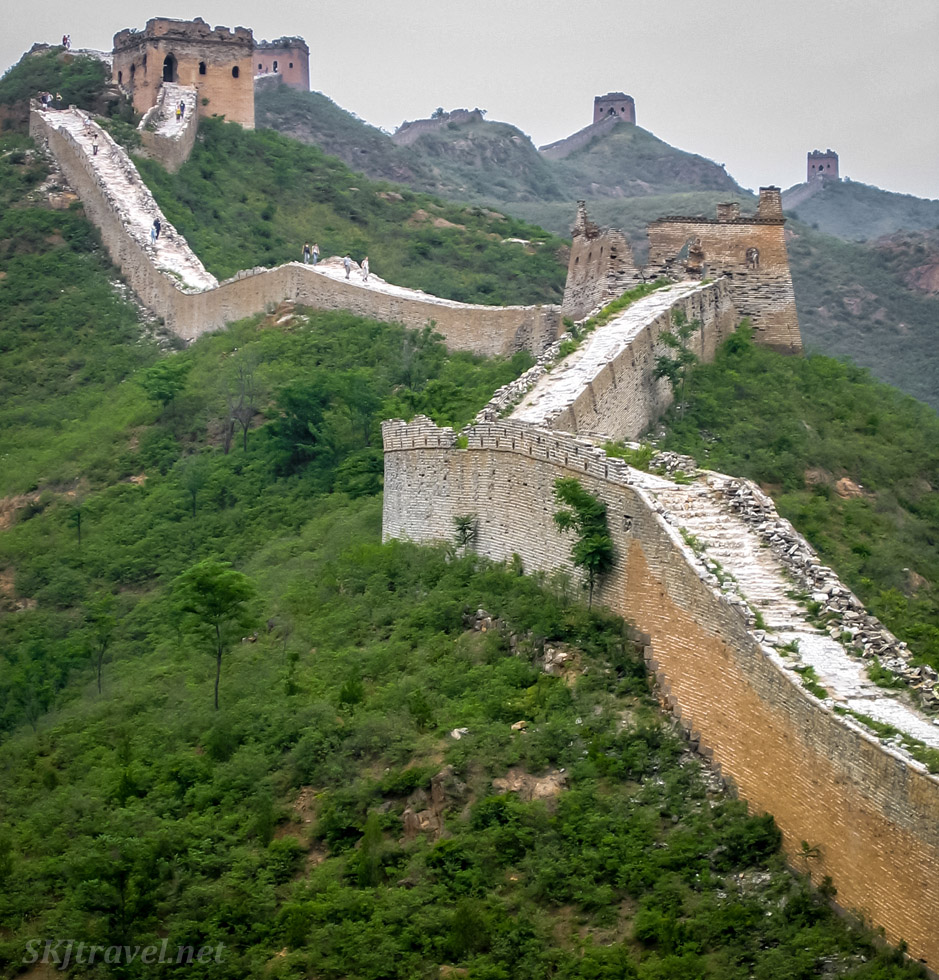 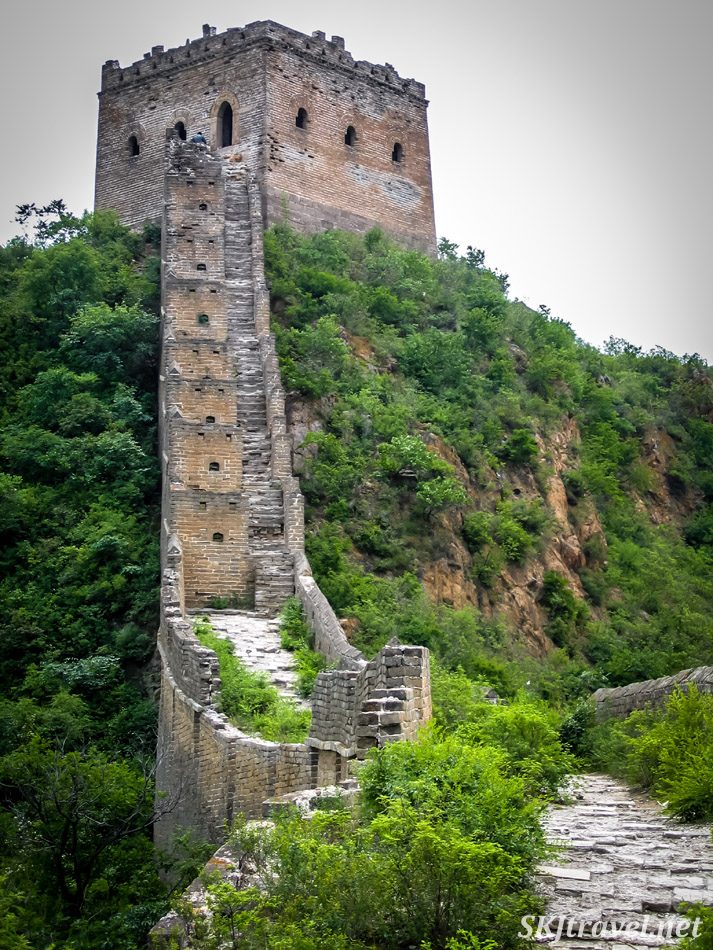 So this stretch between Jinshanling and Simatai is not all reconstructed and renovated and kept up like the stretch just outside Beijing where the bulk of tourists go. I appreciated this ... to see it in a more natural state. Though to be sure, it would be a real shame to let it continue to crumble and decay without any attempts at stabilization, so I do hope the government doesn't just forget about it. But what we see crumbling today is not the original wall from a couple thousand years ago. The Great Wall is generally associated with the first emperor, Qin Shi Huang, who unified China 200 years Before Christ. But he joined together parts of walls that already existed and then expanded it. Most of what we see today, however, even the ruins we see, date from the renovation and additions by the Ming Dynasty, whose heyday was in the 1400 and 1500s AD.

There are many tales and legends of the brutality of Qin Shi Huang, and it's sometimes said that construction of the wall he ordered in his time put the workers in such harsh conditions that many of them died and their bodies were simply interred into the wall itself. True? I don't know, but it's hard not to hear the whisper of ghosts in the breeze. 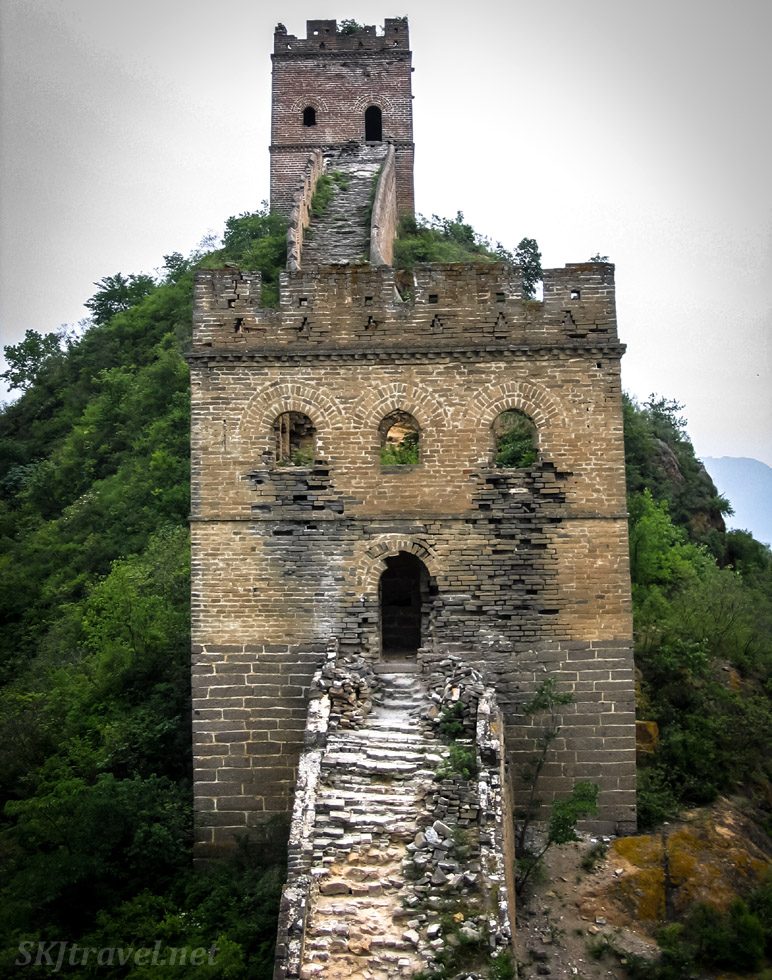 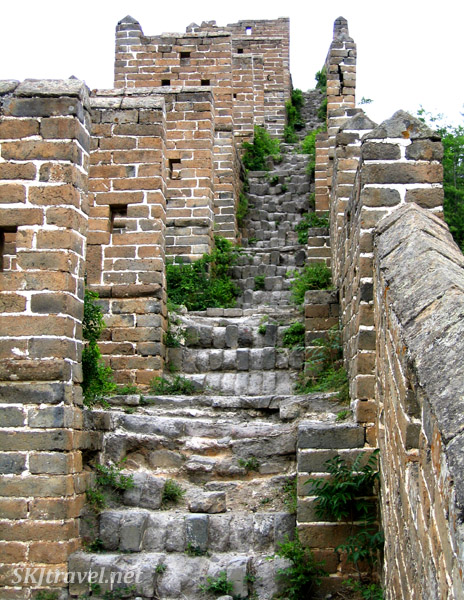 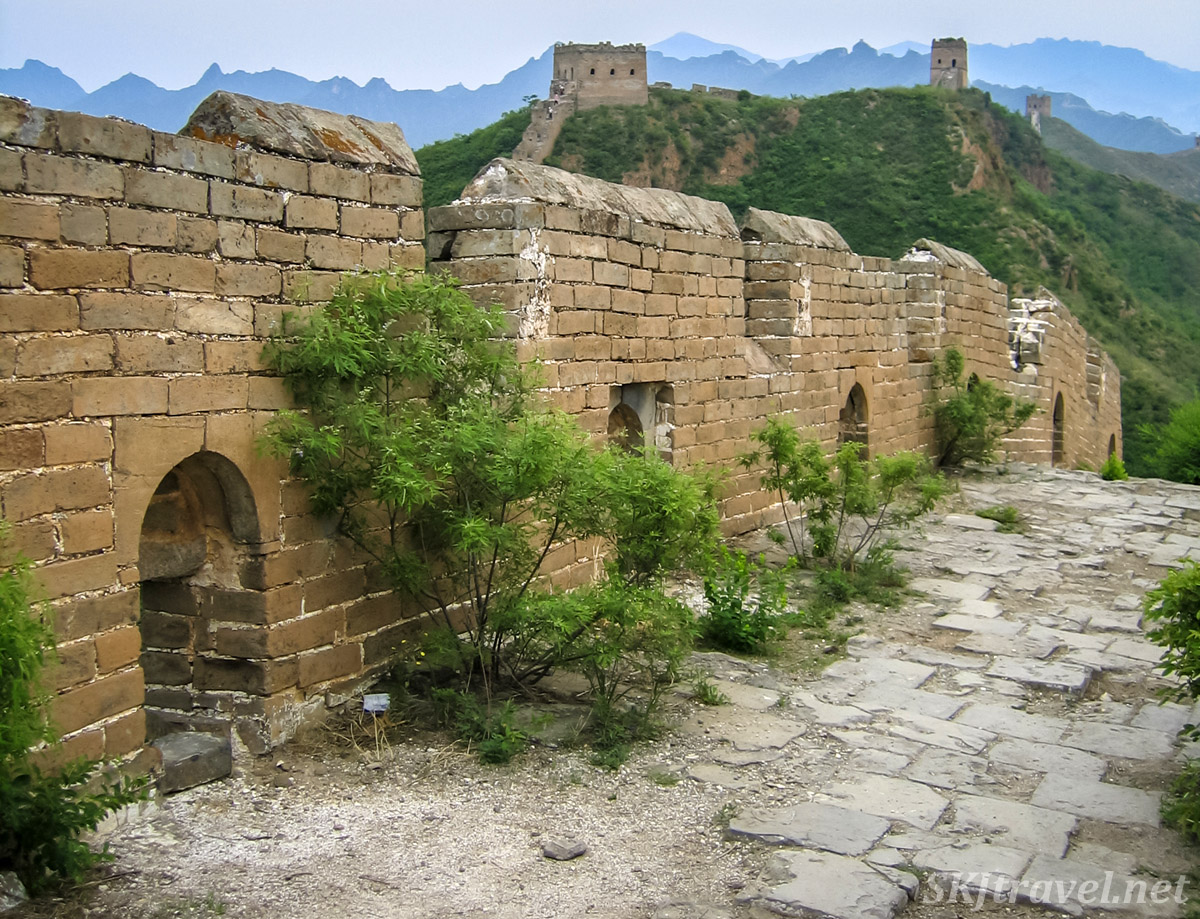 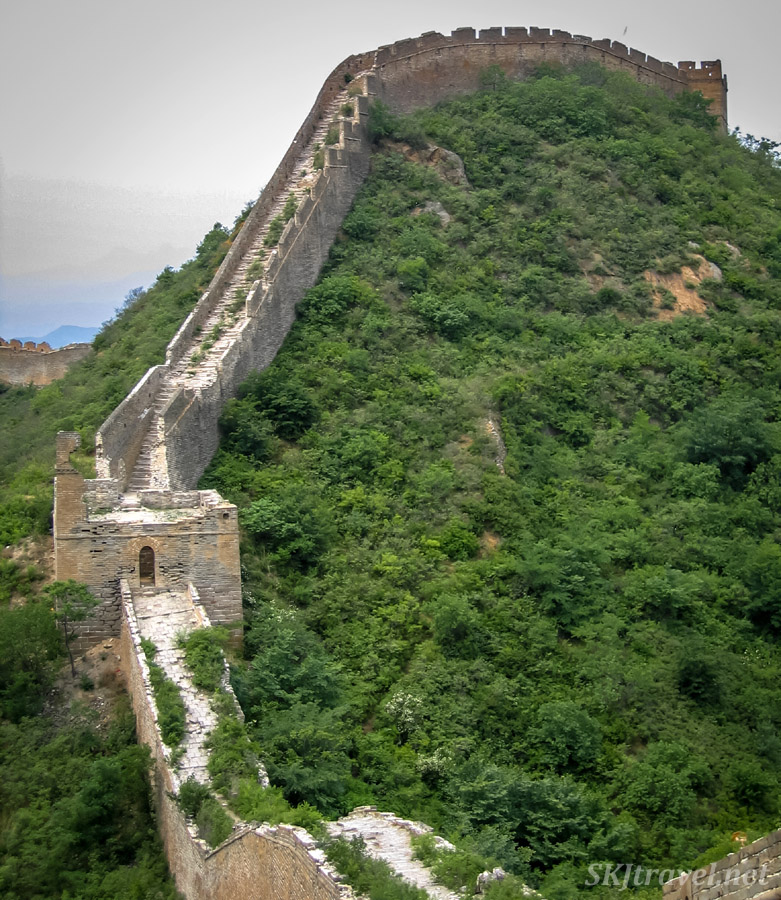 Here are some views from inside guard towers that were in better shape than others. 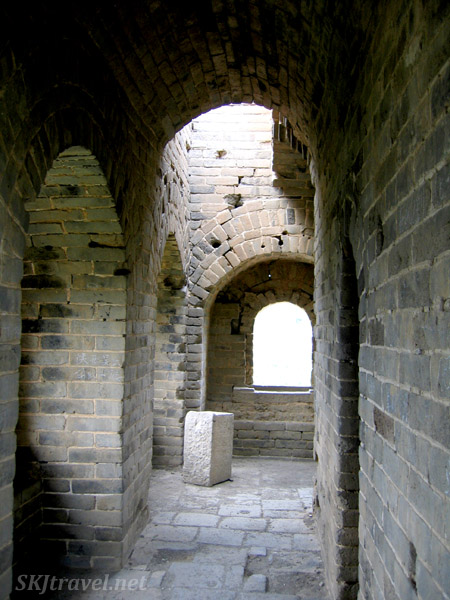 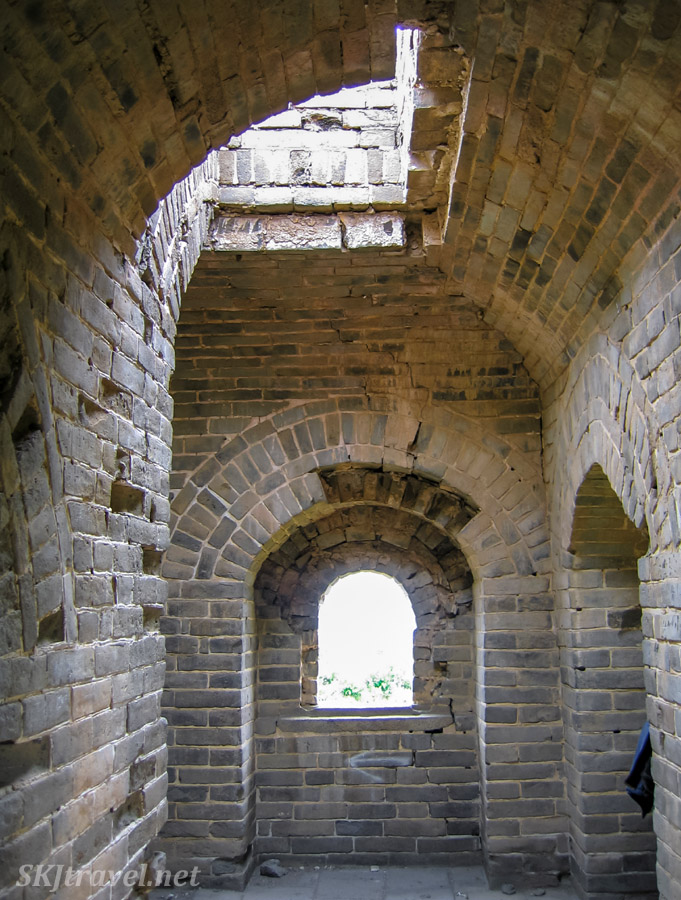 And here are some views looking out some other guard towers. 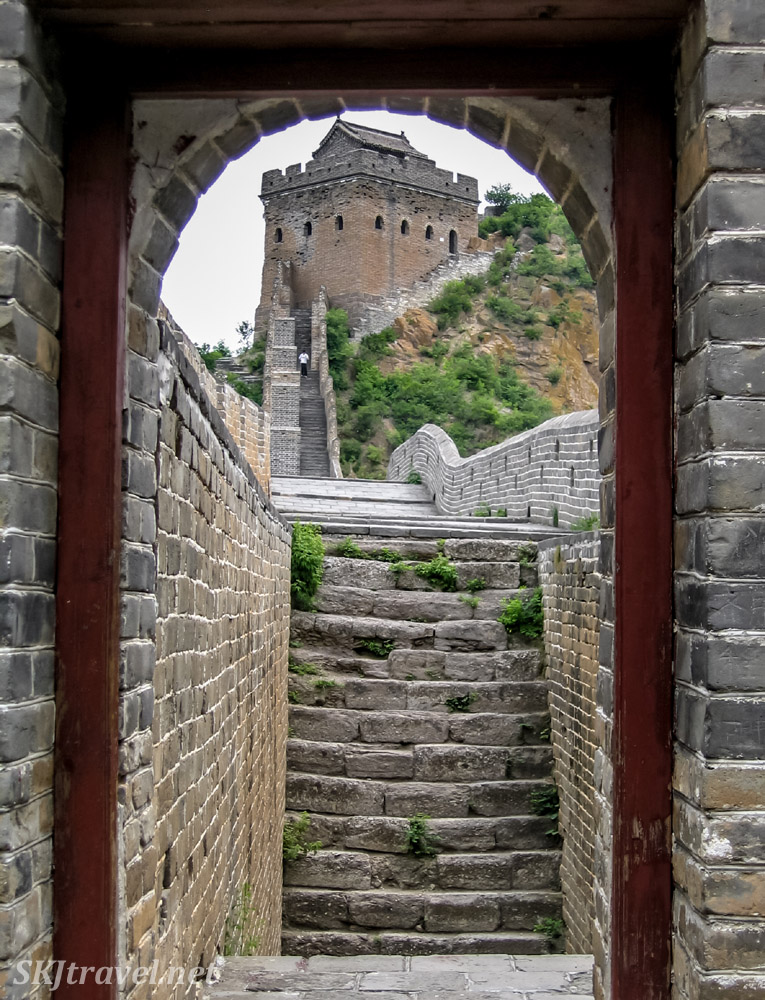 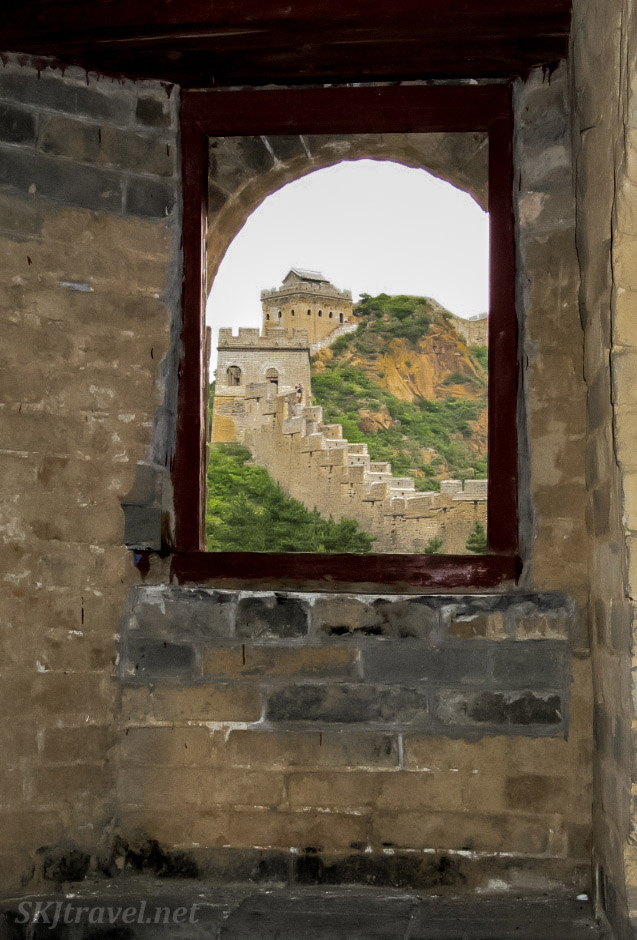 I ended up with two companions for the day whom I met on the bus (minibus) ride; the three of us walked together.  I was astounded to find that most of the time the three of us were alone on the wall – we could see no one ahead or behind us.  I never thought to be virtually alone at a tourist attraction in China! That was really magical at times, alone on this huge serpentine wall, this really ... umm ... what's the word I'm looking for ..... this really great wall.  Imagining the Chinese soldiers patrolling along the top, standing watch in the guard towers, and the barbarous Mongol hordes riding up across the folds of mountains, assaulting the Wall in their yelling, vicious throngs (so we envision), repelled by the staunch Chinese soldiers standing atop; then the Mongols ride on down a bit and simply go around the end of the wall and continue on their merry way pillaging China. ha ha. Every wall has a terminus. 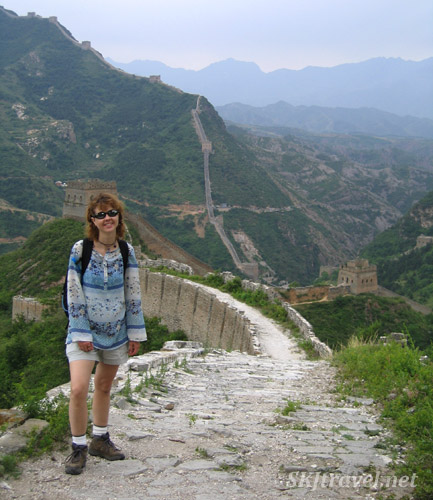 It's astounding, this wall.  You've all seen pictures, but being there gives you a sense of scope that a photograph cannot. (a common phenomenon, of course)  At the end of the 9-kilometer trek, there is a zipline that runs down over a little lake to the parking lot; one can opt to take that rather than walking down to the lot.  My knees were begging for mercy, so I shelled out the cash to take the zip line down.  It had absolutely nothing to do with the fact that it also looked like a lot of fun.  Weeeee! 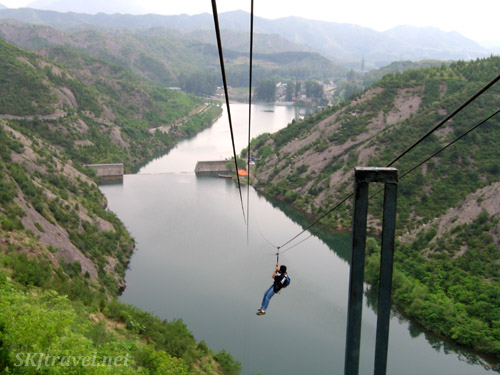 Thus ends my first full day in China ... a spectacular one, filling me immediately with awe at the power of past empires. Can't wait to see what tomorrow brings.

After the post above, I saw more of the Great Wall up north in Yulin City, most of it in total ruin except for the tallest tower along the wall, Zhenbeitai Tower, magnificently reconstructed. Also known as "the first tower," though not because it was the first one built, but for its central and strategic location along the length of the wall. In fact, it was not built until the Ming Dynasty. I found it very interesting, though, how the reconstruction of the wall shortly petered out into the actual remains of the wall, which are humble earthen ramparts, hardly awe-inspiring. But considering the hundreds of years that have passed, still pretty impressive for dirt. 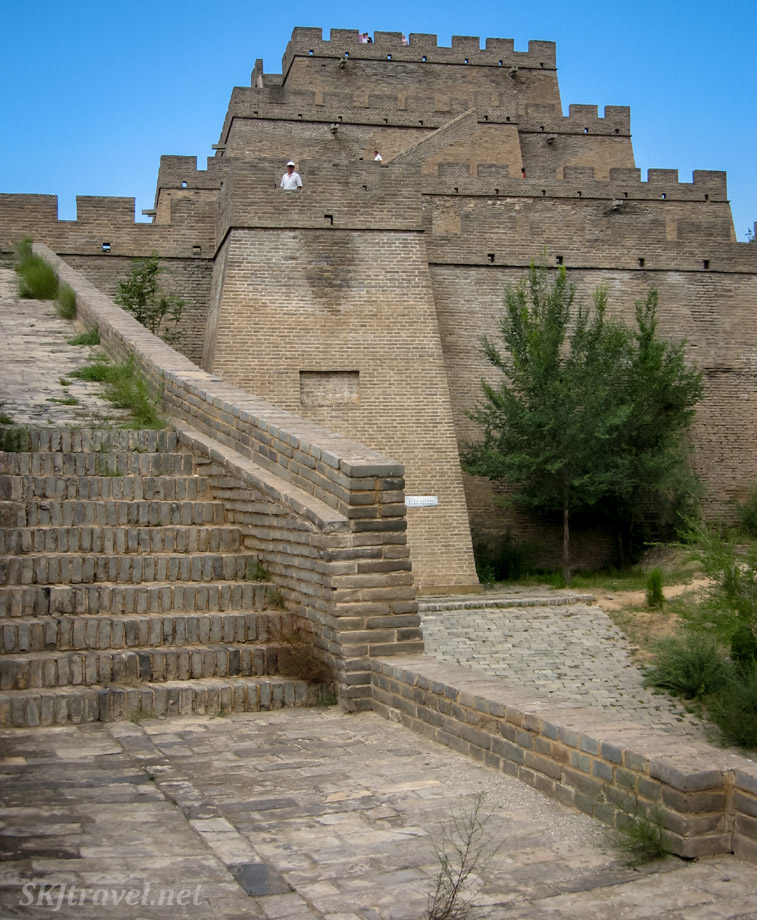 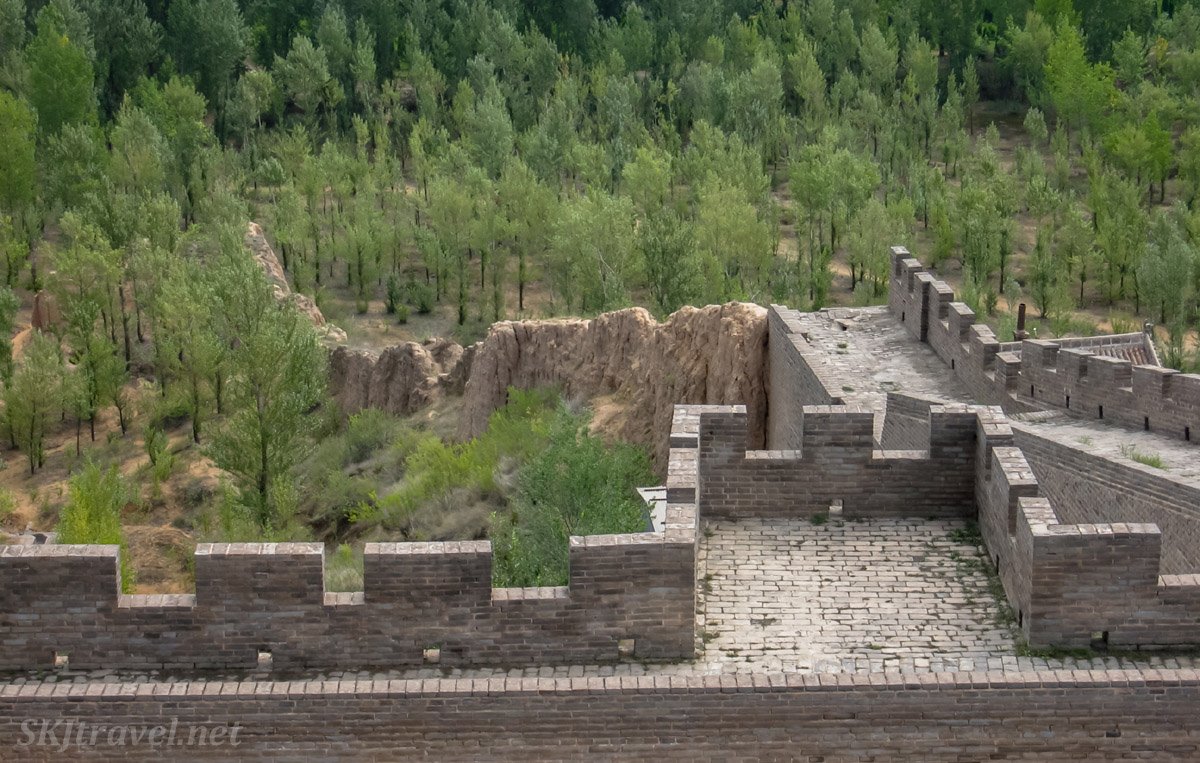