Postscript - A Surprise From China 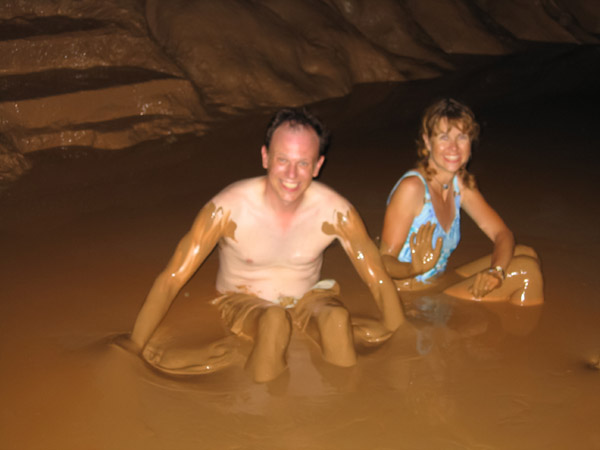 Above, random pic of us in the mud baths in Yangshuo ... wanted to put a photo at the top that would prevent the surprise in this post from being revealed in the thumbnail (when sharing articles on social media, the first pic in the post shows up).

Here is the last note from China, though it's actually from home. I think the China dispatch I sent that got the most responses was the one from Xiahe when I was writing while thinking about a jacket that I really wanted but the vendor wouldn't go below the price I wanted …  and I said I really don't need another jacket anyway and that it would be really heavy to cart around the rest of the trip.

Friends said, oh I hope you got it, Nancy even says she'll buy it if I decide I don't want it later, Mom says oh I'll give you money if it's too expensive ...  Actually I was amused by the rain of comments urging me to buy it.  But even if I had changed my mind, the store had long closed by the time I finished typing and emailing my dispatch, and we left the town at 6 a.m. the next day, before anything was open.

At the end of the trip, I mentioned to Erik that the only thing I really wanted to get in China I didn't get – a coat or long-sleeve shirt with a pretty Mandarin collar.  I saw only a couple others during the rest of the trip that looked like something I might want, but either they were way more than I wanted to pay or I didn't feel like taking the time to bargain.  That's the thing about shopping in China, especially for souvenirs, it takes so much bloody time.  If you just pay the price named, you'd be a ridiculous sucker, so you have to stand there and haggle for awhile, some days you just don't have the energy!

Well anyway, to cut to the chase, we got home this afternoon and as I was unpacking my backpack, filling up the laundry basket, Erik was unpacking his pack and pulling out the souvenirs we'd bought throughout the trip, when suddenly before my eyes he unfurled that Mandarin coat from Xiahe!  I couldn't believe it for a long time that it was actually the coat I looked at in Xiahe.  You all know that Erik cannot keep a secret of that nature for the world.  In all our years of marriage, I don't know that he's ever kept a secret so completely, well, secret.

And how did he get it anyway, since the store was already packing up for the day when we left it?  Well, apparently, while I was typing the dispatch to my maillist, he told me he had to go to the bathroom.  I thought nothing of it and continued typing.  He ran back to the room, had to look for his money pouch because I'd buried it in the middle of my pack (for some reason I can't recall now, we didn't take it with us that day), then snuck out of the hostel lobby where I was typing, literally behind my back as I was hunched over the computer, ran over there just as the shop was closing, bought it for the price that I had conveniently pre-bargained for him (Y110 which is about $14) then tip-toed behind my back again to the room and packed it away, and then carried the heavy thing around for the rest of the trip.

The thing he had going for him was that I was still typing after he completed the caper and came back to sit with me — because apparently he was smiling (he told me later, couldn't help himself) but I was too busy typing and didn't notice, or thought it was for other reasons.  I continued to mention periodically throughout the trip how I really wanted a Mandarin-type coat, so he felt very smug knowing he had bought it for me.  He couldn't keep the secret as long as Christmas, but that's OK!  Truly I was surprised and could hardly believe it.  And I love it.  I'm going to wear it every single day until I die.  It's a tad big in the shoulders, long in the arms, but it's A-OK.  Well, it was such a sweet story, I thought I would share it. 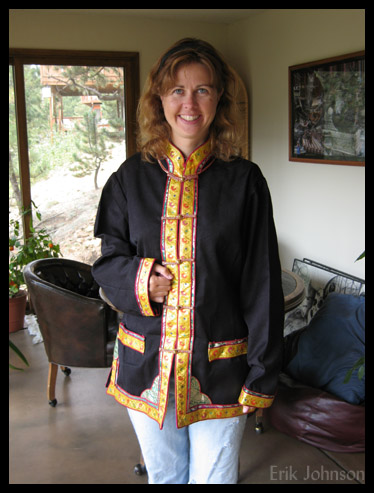 So now since I'm at the keyboard, I'll relate the rest of our trip.  Our flight didn't leave until evening on Tuesday, so we slept in in the morning and then did some last minute shopping, bought some kitchen utensils.  That may sound like an odd thing to buy, but really nice cookware is absurdly cheap.  So Erik also lugged home for me a little cast-iron serving skillet with a wooden trivet.  We also got another hour-long massage at the same place in our hutong.  Again, more of painful experience than a relaxing one, but we feel that it was really helpful to our bodies.

Our flight out of Beijing was delayed 3.5 hours, so we missed our connecting flight in L.A. and had to spend the night there in L.A., but caught a 6 a.m. flight to Denver the next morning and somehow ended up with first class seats. While in L.A. we also had a meal voucher, and even though it was late at night, we used it to grab a meal at the hotel.  What did I order?  I didn't have any western-food cravings while in China, but as soon as I saw french fries and burritos listed on the menu, I ordered them both and horked them down in a glorious display of gluttony.  I kid you not, I come back home heavier than when I left.  We ate so well in China!

I mentioned the other day that I ate that shrimp at Anrong's house and at the time that I wrote you I hadn't had an allergic reaction.  Well, just to demonstrate how much food I'd eaten that night, we finished dinner by 8:30 or 9:00 p.m.  And it wasn't until 1:30 a.m. that I woke up and suddenly broke out into hives, it took that long for the shrimp to finally make it into the system.  I took some benadryl, but was worried that it would also take them a very long time to get into my system, so Erik suggested a further, rather drastic measure of opening one of the capsules and directly eating the powder.  I was desperate for quick action, so I went for it, and poured the powder onto a little cracker we had with us, held my nose shut and licked it off the cracker, ate the cracker and drank water.  And I must tell you, it was astonishingly unpleasant.  And my tongue was numb for like 10 minutes.  But it started to take the edge off the itching after about 20 minutes.

Another note of slight amusement:  you wouldn't really think that six weeks in a foreign country/culture would be enough to affect your brain too much, but when we got back to Denver and were walking through the terminal to the baggage claim, it was really strange suddenly walking among all white people again.  At first I kept thinking that I might know the person (all of them, everywhere around me!).  But for the past six weeks 24 hours a day I've been surrounded by people that look very different from me and I have felt very conspicuous. I don't really know how to explain it, but for about 10 minutes in DIA, it felt very strange, even disorienting, to be in amongst a crowd of all white people.

And the other thing I realized after I exited the bathroom near the baggage claim, is that I have become thoroughly trained not to breathe through my nose in bathrooms of any sort.  A couple times during the trip, Erik mentioned something about the overwhelming stench of a particular bathroom here and there, and I never noticed because I have conditioned an auto-response (begun in China last year) that about 30 feet or so before the entrance to a public restroom, I just close down my nasal passages and breathe only through my mouth. When I left the bathroom in DIA, I realized, when about 30 feet away from it, that I'd been breathing that way.  I'd done it the whole time on the plane and in LAX.  Just an automatic thing.  Also back in America, I still look around the toilet for a trash can to put the toilet paper in (most toilets, especially public toilets, but even many private ones) don't accept t.p.  My first brief reaction is annoyance wondering where to put the used toilet paper.  Then I remember, oh yeah, I can just throw it right in the toilet.  How convenient.

One thing that I must admit is nice in the otherwise tragic rebuilding of the hutongs, is the upgrade in the public restrooms.  Some families don't have plumbing in their own homes and use a "community" toilet facility, and tourists and workers can use these also.  Last year I used one of those near our hostel and it was one of the more horrifying experiences. They're really quite nice now (who knows how long they'll stay that way, they're still new, but for the time being it's a good upgrade).  A guy we sat next to on the plane from Beijing to LA lives in America now but goes home to China periodically to visit and says each time he goes back he doesn't recognize Beijing from one time to the next, so much is changing and being torn down and rebuilt and new buildings, and even roads he doesn't recognize.  It's just astounding, this remodeling frenzy.  But, unfortunately, for the time being anyway, it's really nothing more than a facade.  It's like they're building an old 1800s western town with the fake two-story building fronts and stuff (literally fake fronts in some places).

I laughed when Erik one day casually commented, "If China wants to become a first-world country, the first thing they should do is stop letting their kids crap on the sidewalk."  It is a little disturbing to watch this happen.

betwwwyhtttttttttttttttttttttttttttttg (a few words from Kitty there, walking on my keyboard) Between the kids crapping, the dogs crapping, the incessant spitting of huge loogies everywhere, one has to try very hard not to think about it if you want to set your baggage down for a moment, or if you are exhausted or need to retie your shoe and have to sit down for a minute on a step.....  They live through it, we live through it, but it's a little disconcerting.  By the way, the dog population has exploded in Beijing since last year.  They're mostly all the little toy dogs, lots of Pomeranians and Pekingese and Chihuahuas and the like, but there's heaps of them now.

Alrighty, well, laundry must be attended to.  I am embarrassed to realize how giddy I am over the prospect of wearing new clean clothes fresh from my closet tomorrow that haven't suffered through the dust of the north, the humidity of the south, and the pitiful hand-washings in tiny sinks for the last six weeks and being stuffed into my backpack still damp over and over.  Kitty purrs away on my lap now, which almost makes me want to stay and type more to keep her here.  But duties call.  I have to go wear my Mandarin coat now. :-)