Heaven and Hell - A photo tour of Gao Miao Temple

The last thing on our itinerary in Yinchuan, Ningxia Province, was to take a day trip to another monastery called Gao Miao in a smallish town called Zhongwei. The drive out there was about three hours from Yinchuan and we splurged and hired a taxi (same driver as yesterday) because we really needed to be back in town in time for our train and didn't know the bus schedules.  The ride was very interesting in itself.  Yesterday I mentioned the XiXia tombs like little pyramids or beehives.  Well, we passed several graveyards with modern tombstones, but each headstone was surrounded by a stone circle (fist-sized stones) and a little pyramid of stacked stones lay behind each gravestone.  A whole hillside of those was really picturesque.  (But I didn't ask the driver to stop. Some things one just keeps to their own mind's eye.)

Then we drove through some parts of an actual desert.  The sand dunes were interesting to see their shapes and cornices.  The driver stopped for a cigarette at one point and we got out and felt how ultra fine the sand is, almost like powdered sugar.  And we saw some wild horses and then all throughout the desert we saw camels everywhere – light brown, dark brown and white, two-humped and single-humped.  I don't know if they were wild or not.  There were exceedingly few people to be seen anywhere along that 3-hour drive; I don't know who they'd belong to.  But it was fun to see camels just hanging about on their own off the side of the road.  Parts of the road were blown over with sand and a little crew has the job of shoveling sand off the highway.  I imagine they have to do that every day somewhere.  In that 3-hour time period on the way out to Zhongwei we passed maybe 15 cars either going our or the opposite direction.  It was unbelievably desolate.  We passed several motorcycles, though, maybe 4 or 5 stopped along the side of the road and the rider sitting beside it smoking, or one guy was talking on a cell phone.

The architecture at Gao Miao was just delightful. The kind of thing Erik and I go google-eyed over. Very fun photographing. The monastery is stacked building after building up a slope. Many different roofs lines converging together in the same space. And with all temples, the roof tile are elaborate, the painting of the eaves colorful and intricate. Really kind of overloads your brain sometimes when you stop to inspect it all. 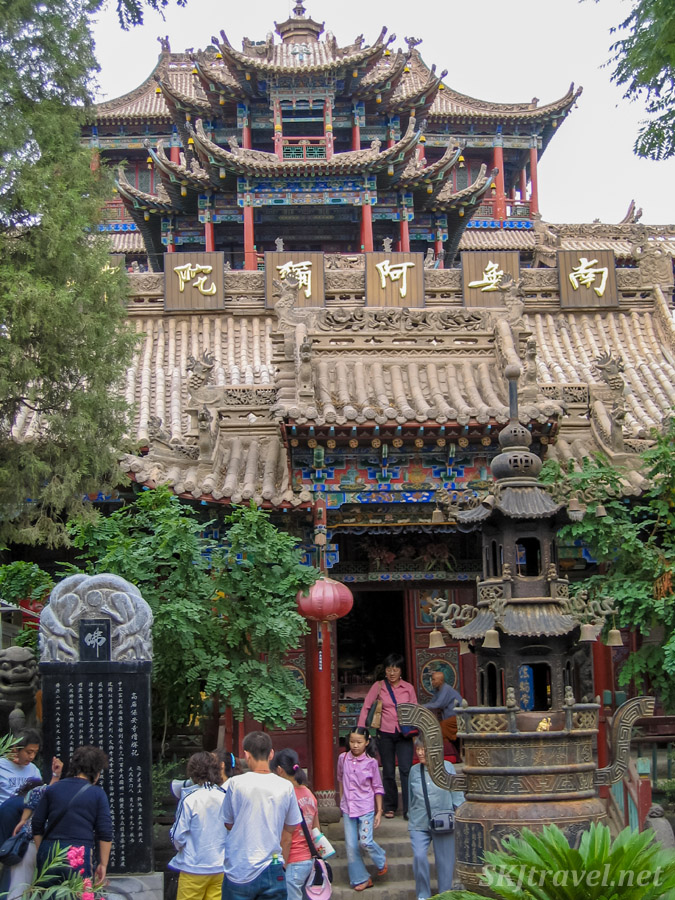 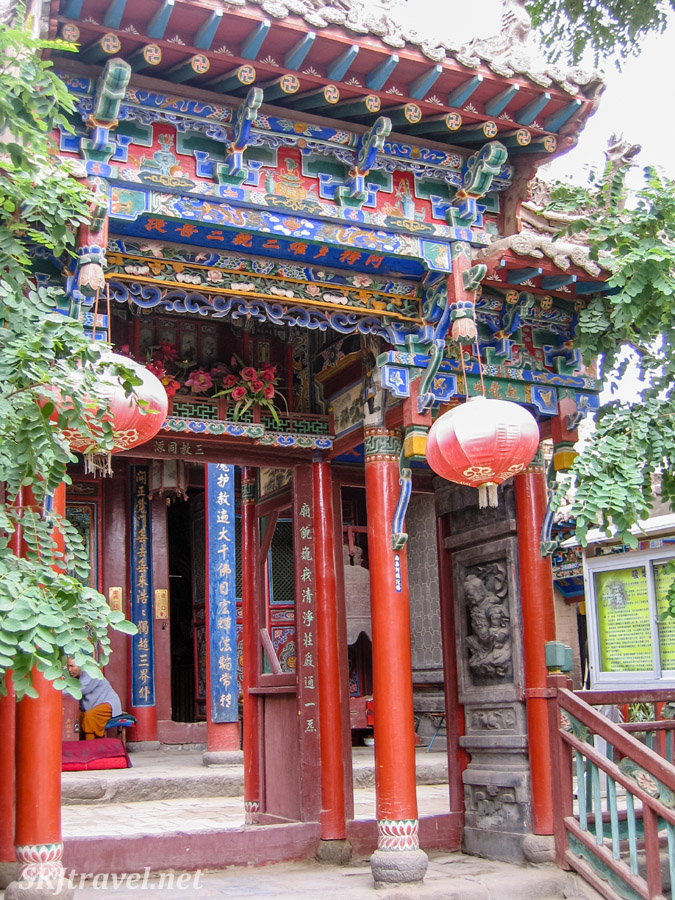 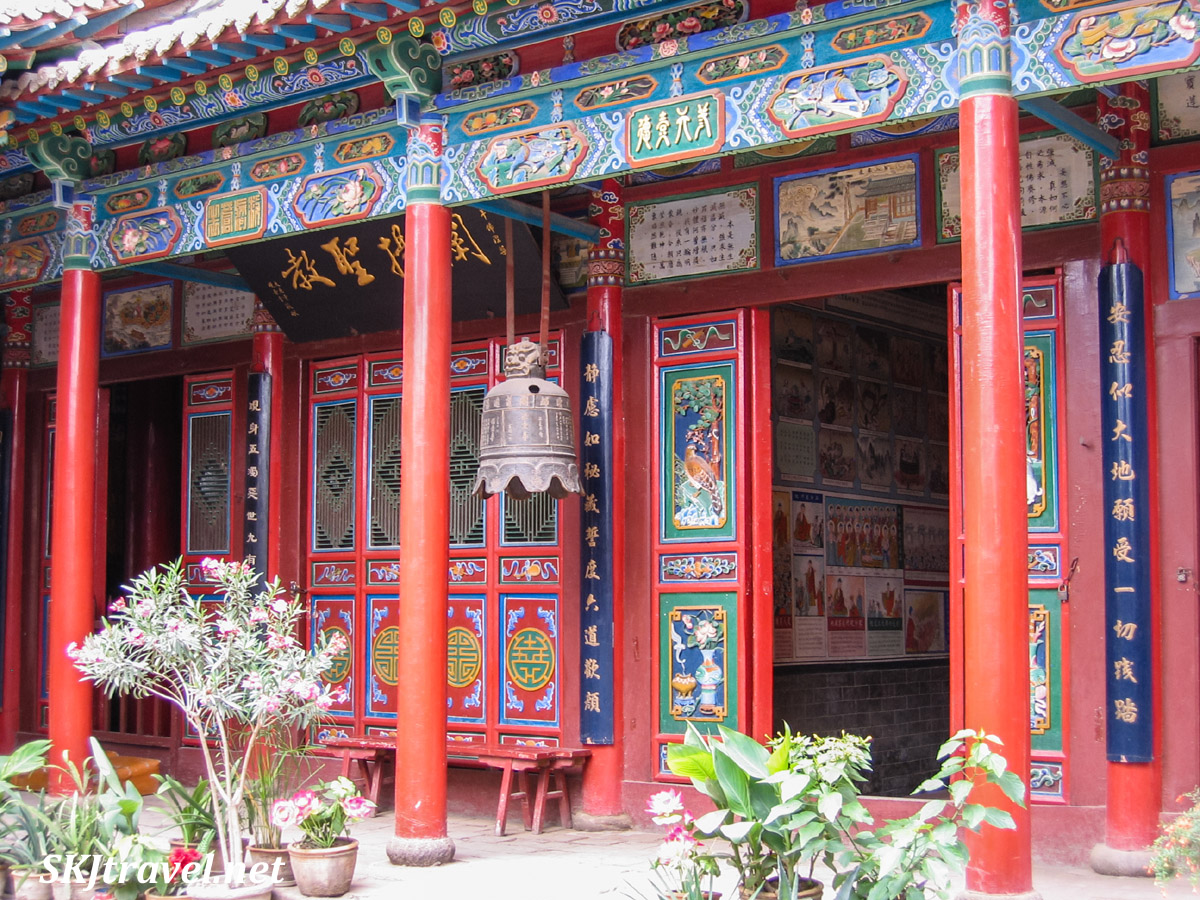 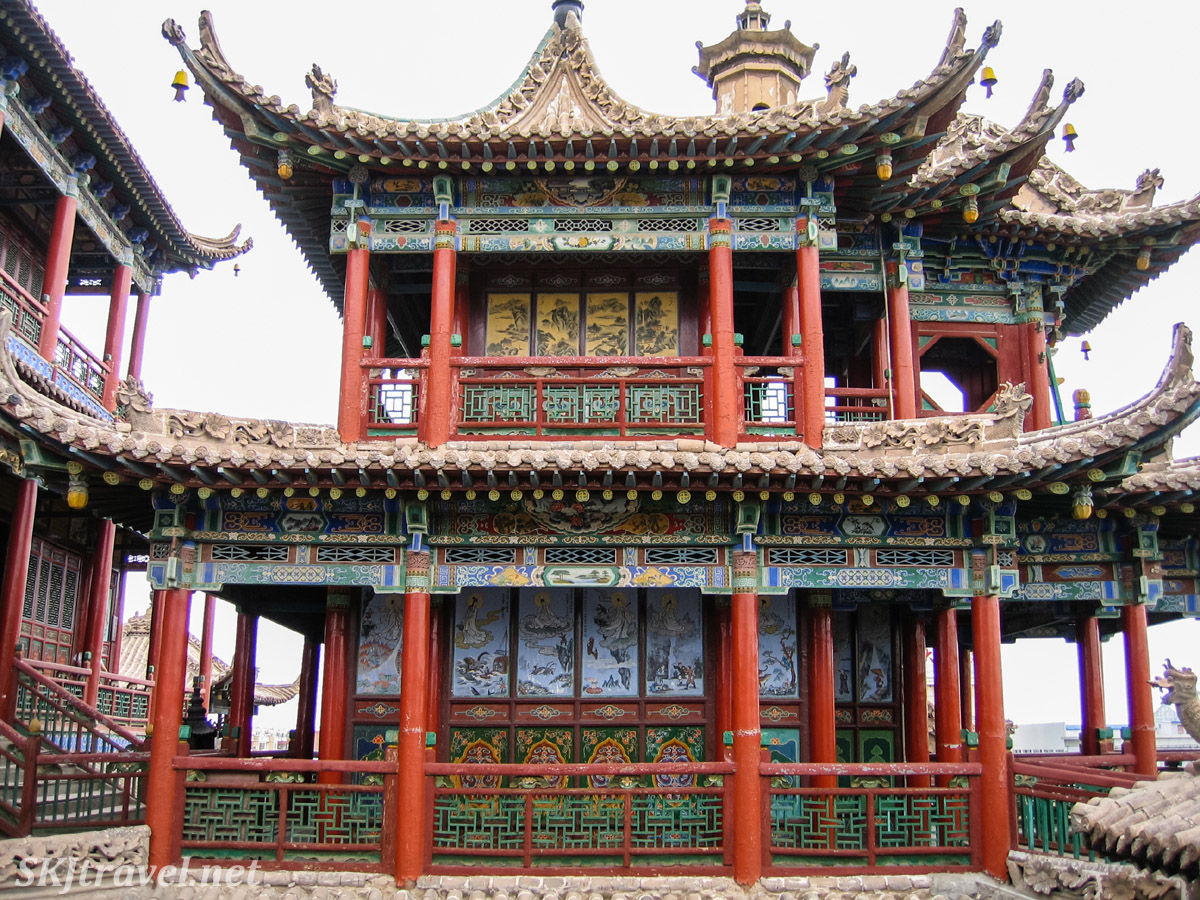 It's not a particularly large place, but it seems large because of all the different rooms at different levels and different side buildings.  We ran around "click" "click" "click" all afternoon. Hard to capture sometimes, looking up toward the sky. But you still get the idea of architectural fun factor ... and the almost overwhelming color fun, too! The wooden doors are worthy of study in and of themselves for the stunning carved and wooden reliefs. 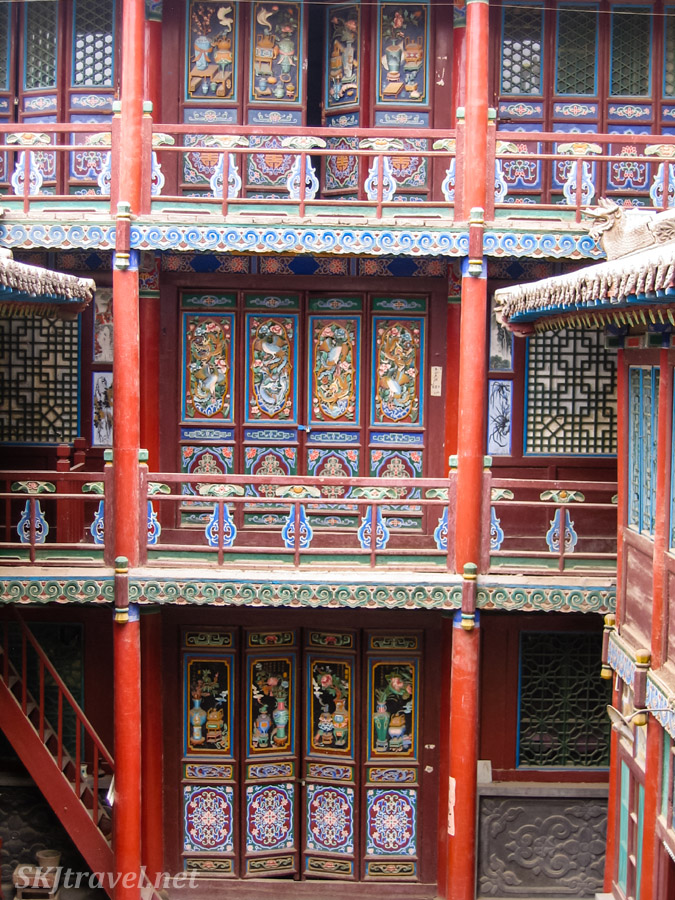 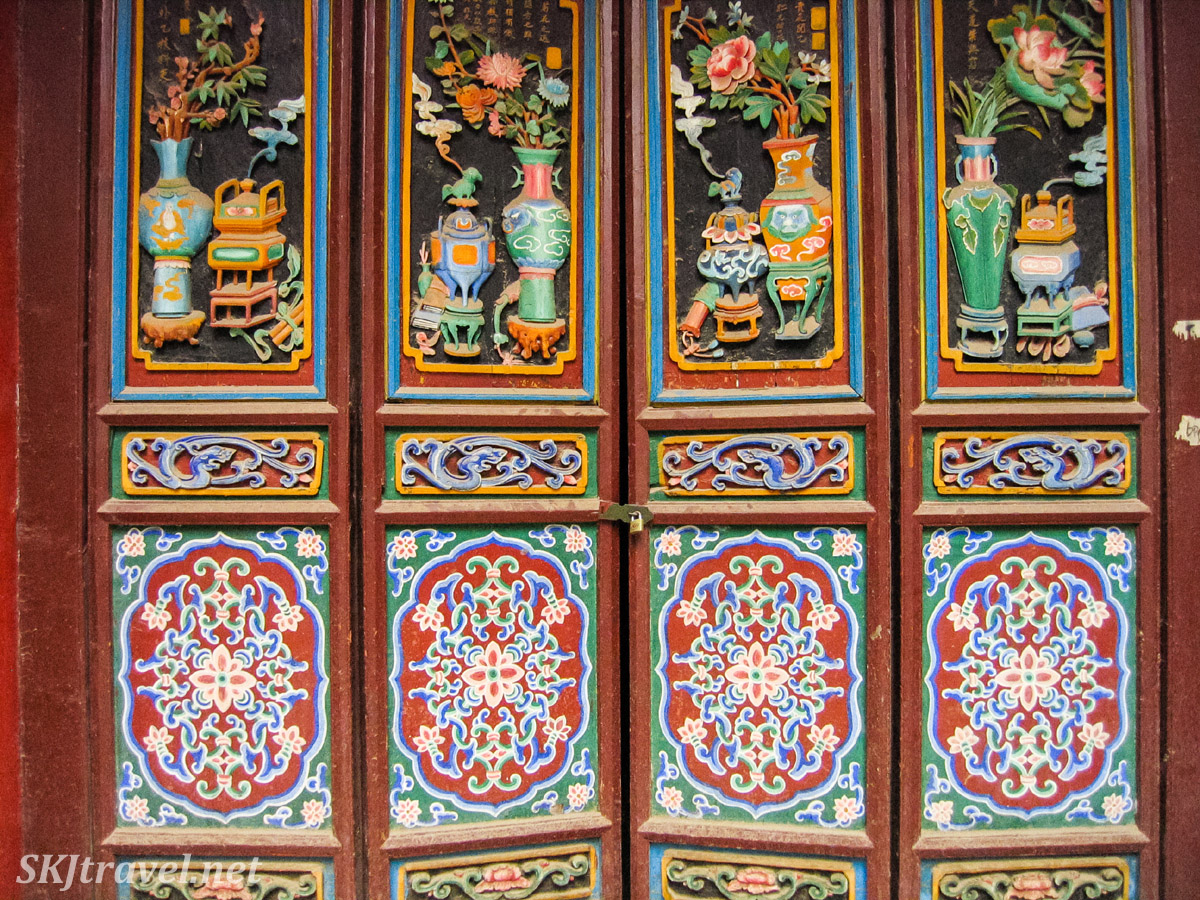 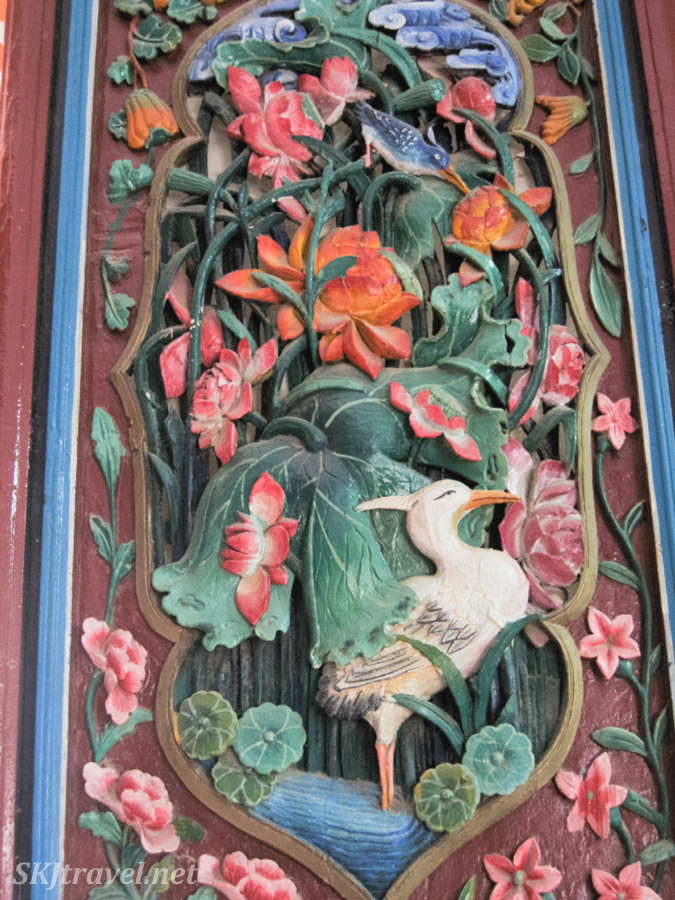 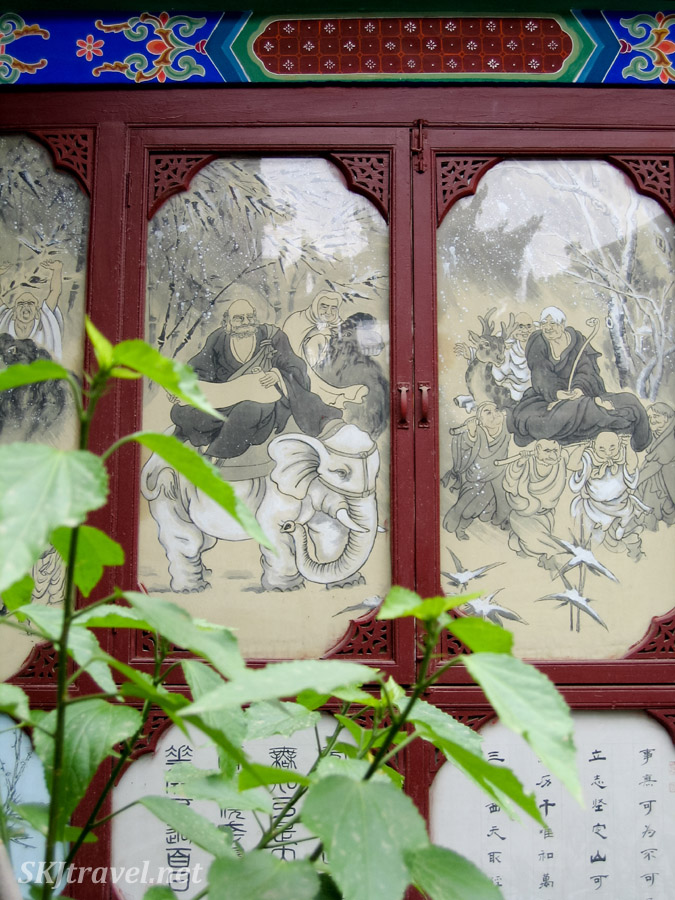 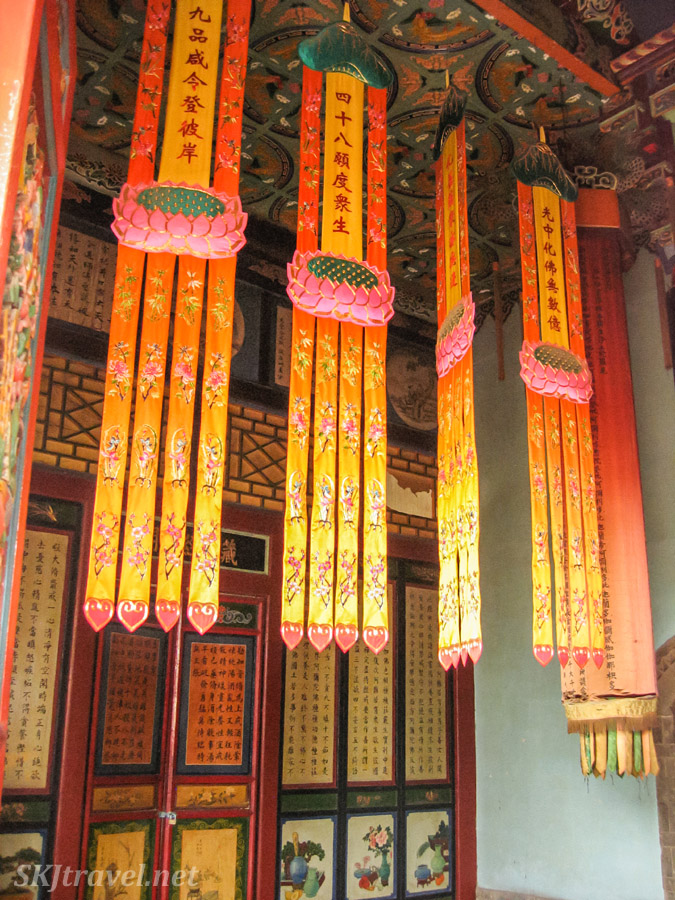 Large incense burners are to be found in every courtyard. 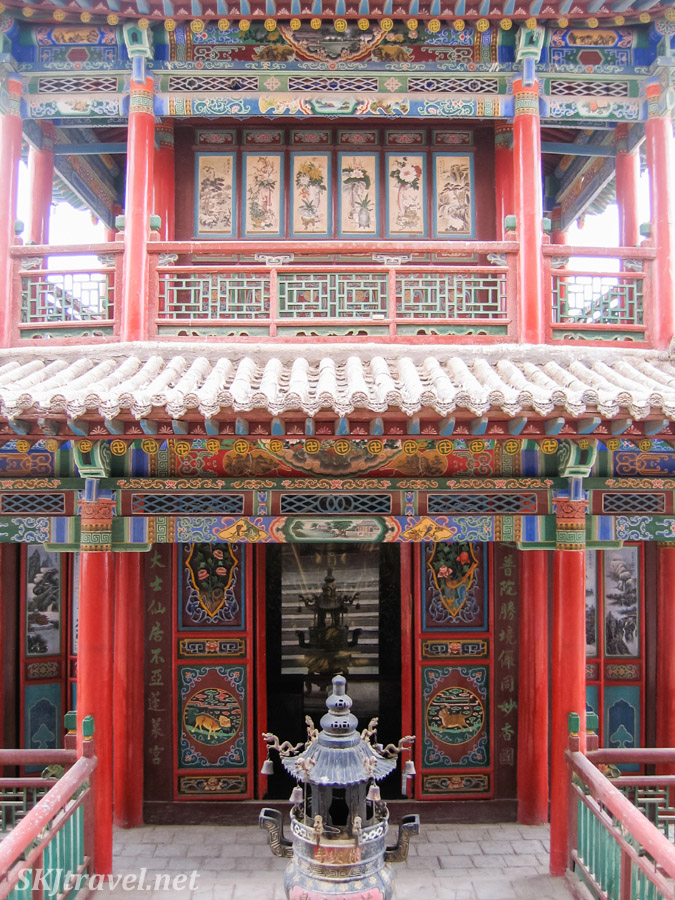 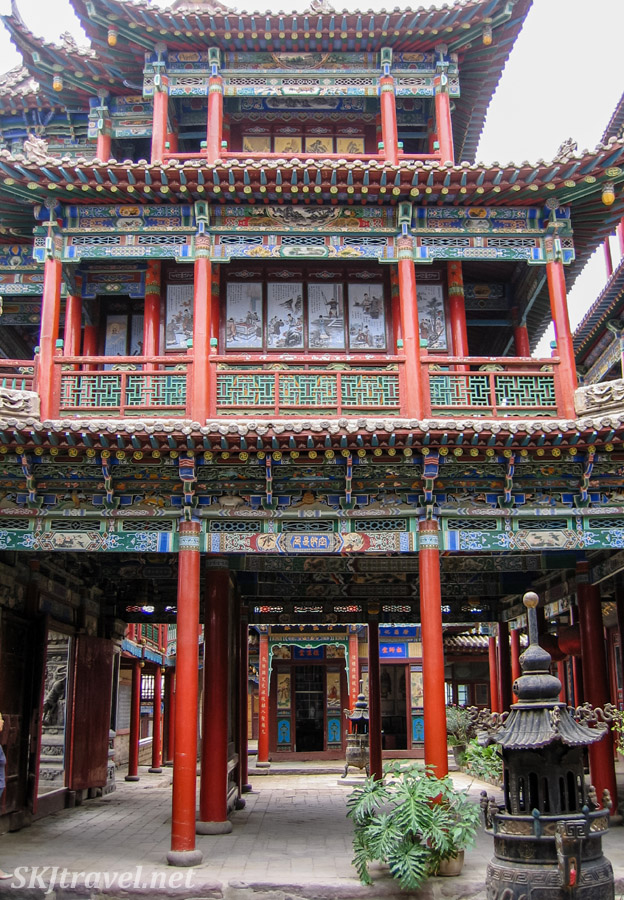 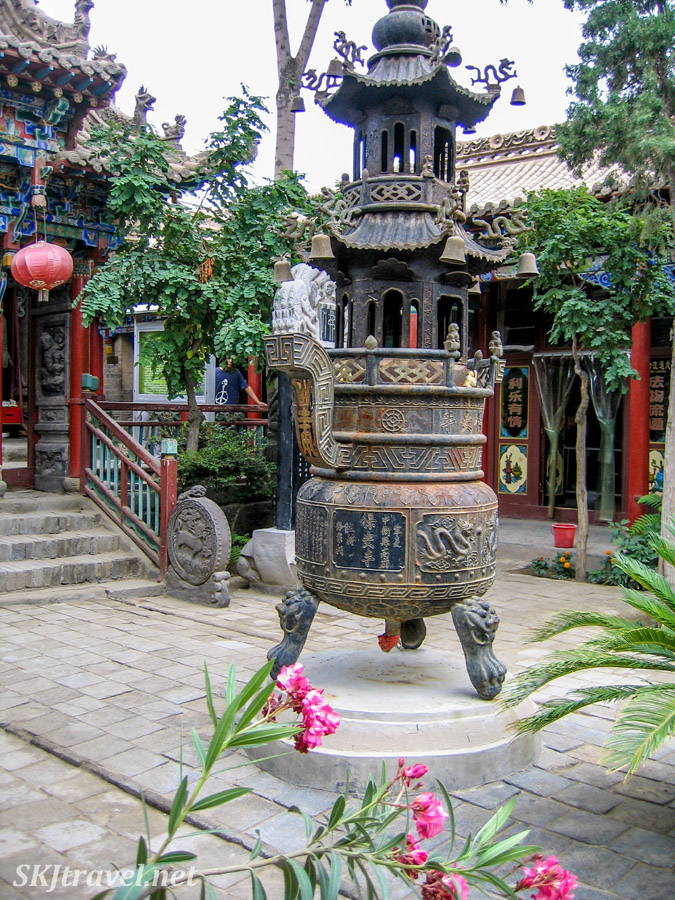 Not only the painting is elaborate but also the stonework. 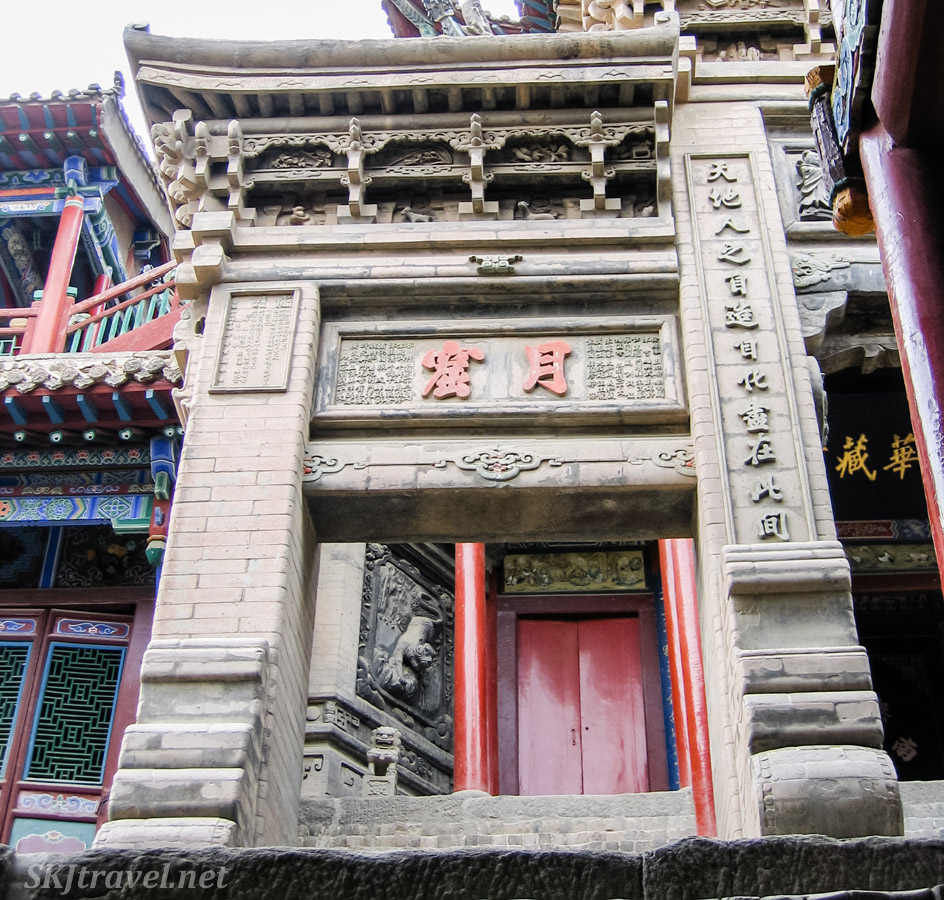 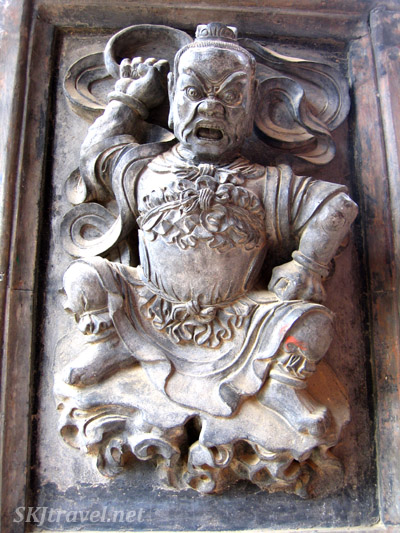 Then there are the rooflines and the stonework of the roof tiles and dragon heads. There is simply nowhere you can look that is a patch of plain, smooth simple lines and colors. Everywhere is a riot of texture pigment. It's almost overwhelming but not quite. Just right on the line to make it a delightful marvel. At least IMO. 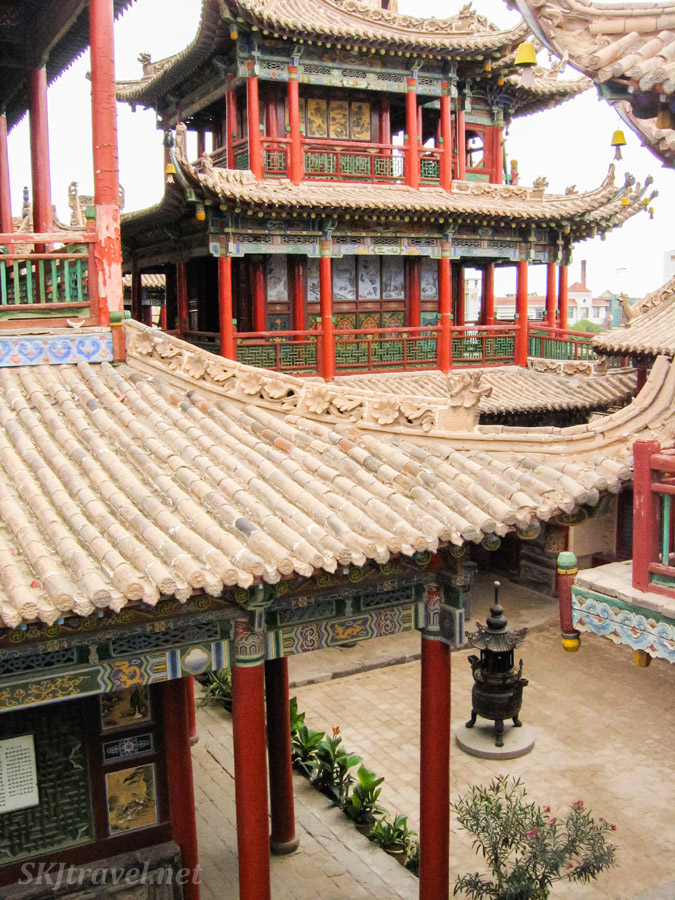 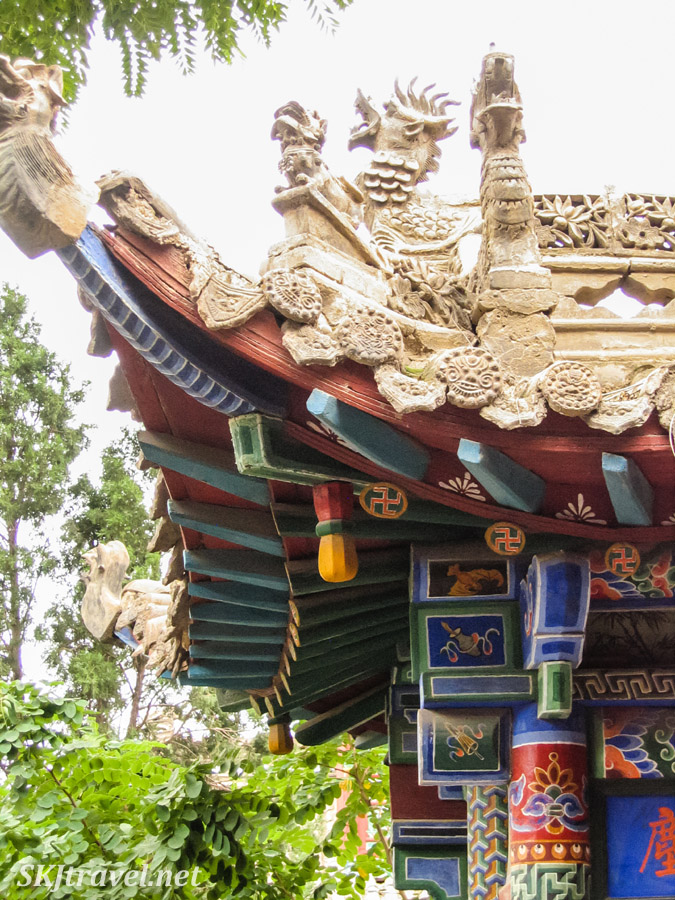 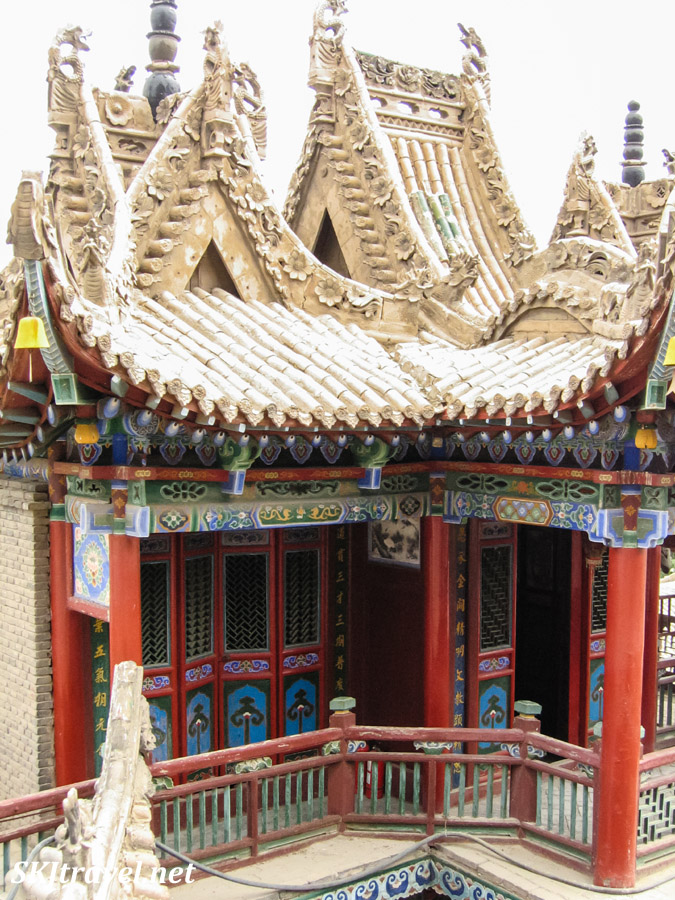 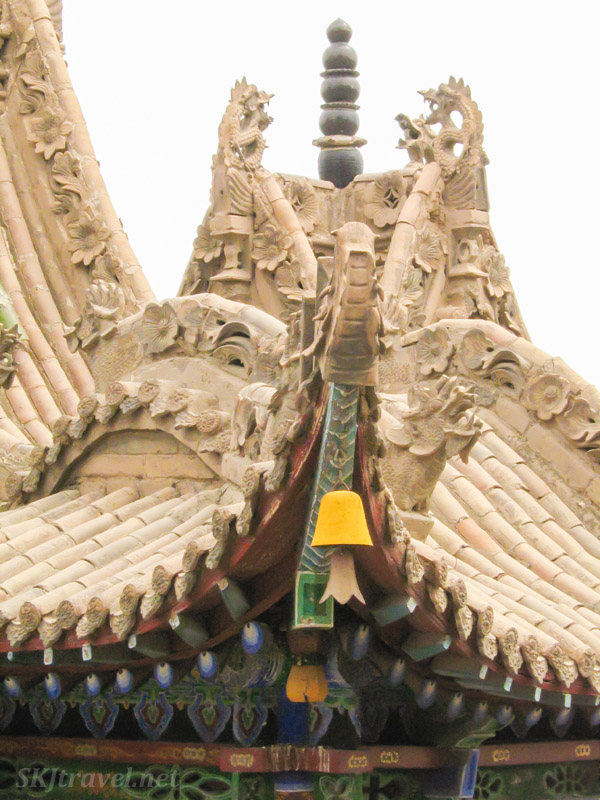 Though it's called the Gao Miao Monastery, it's a really wild conglomeration of all kinds of different religions, not just Buddhism, but also Taoism, Confucianism, and Hinduism.  Really, it was kind of whacky. The insides were not so impressive as other temples we've seen here ... the statues and effigies and paintings inside are afflicted by a mild case of hokey-ness and cheesy-ness. But hey, that's OK. The wicked cool exterior completely balances it out. 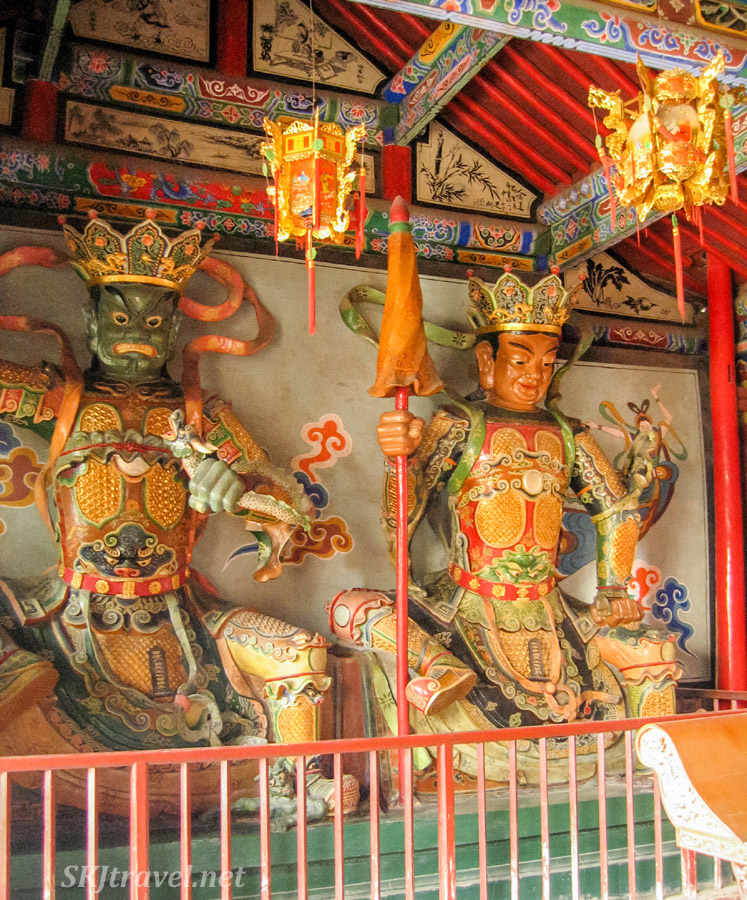 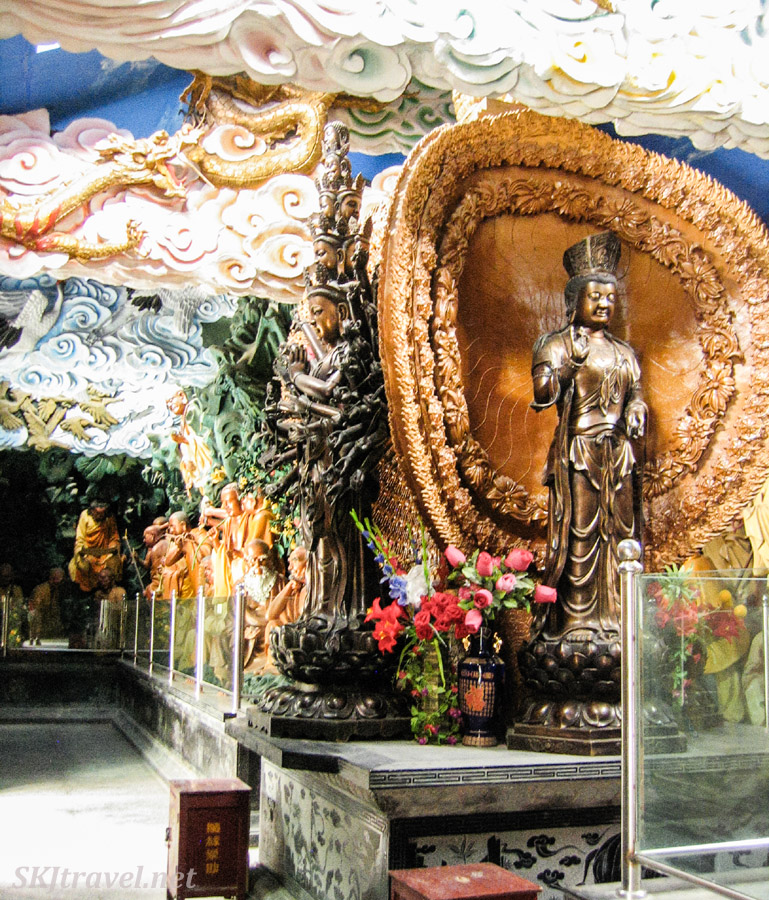 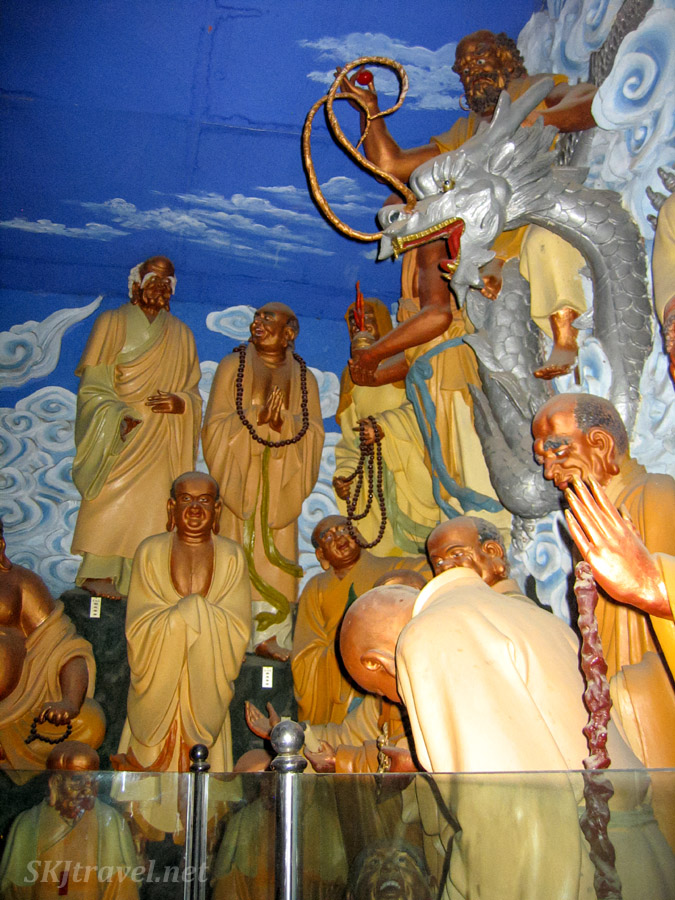 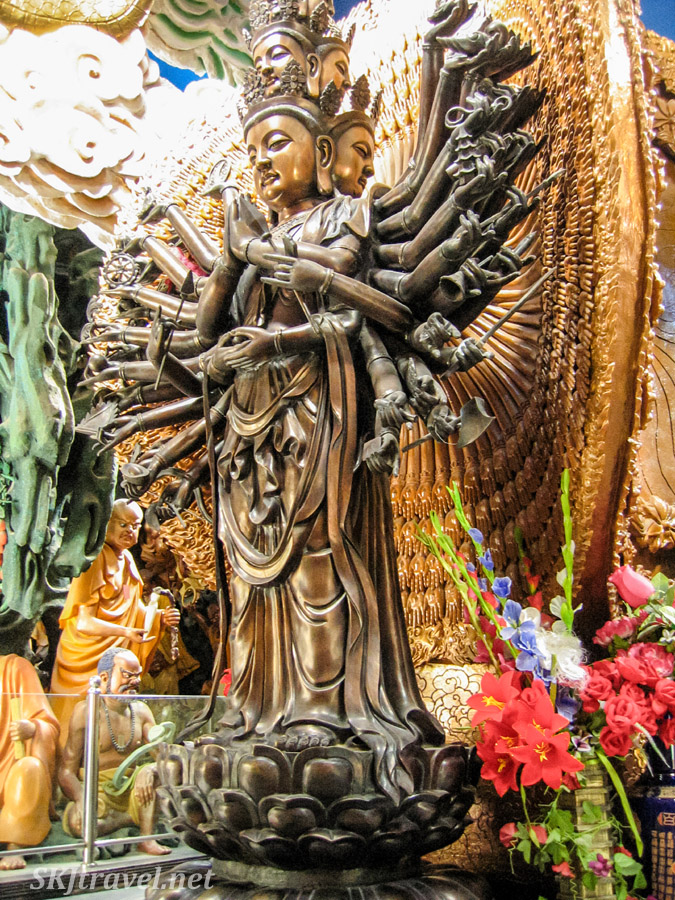 And now, ladies and gentlemen ... for the Hell portion of the tour, as alluded to in the title of this post. After touring the ethereal upper levels of this monastery, we paid an extra 5 yuan to tour the seriously scary underworld of Hell. 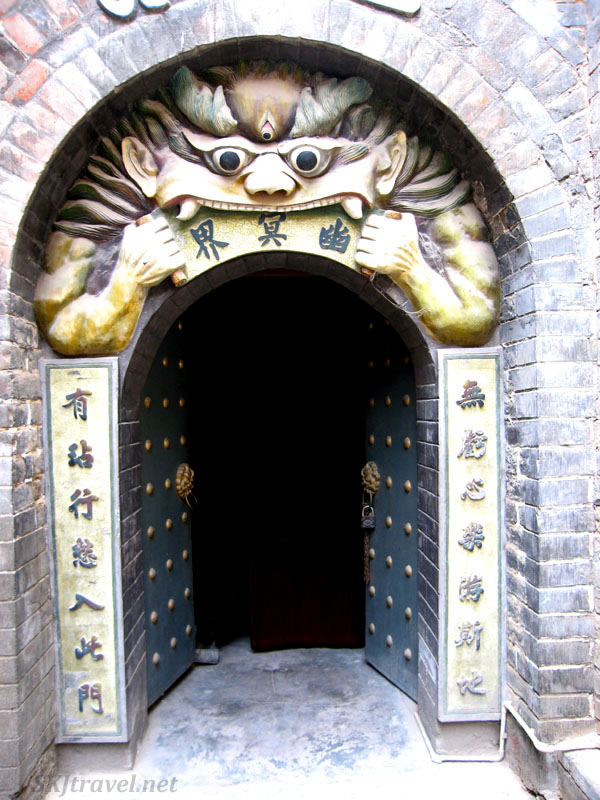 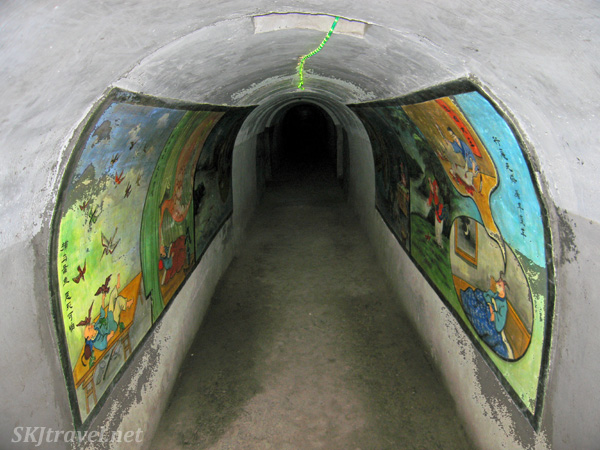 These are old tunnels, once used by the communists as bomb shelters, that have been transformed into a grotesque Disney-like tour of animated day-glow scenes of the tortures one can expect in Hell. It was so unexpected in a place like this! Clearly, torturous hell is not a Buddhist concept, this comes more from the Hindu tradition and now usually conceived of Christian ideology. The soundtrack in this house of horrors was bloodcurdling, with wailing, screaming, crying, yelling, at circuit-blowing volume.  Seriously creepy.  And there are paintings along the tunnel walls of happy pastoral scenes and then a line in the middle of the picture, on the other side of which the recently happy character is now being hideously tortured.  Although, goats seem to fare pretty well in hell: in the "pastoral" scenes they are busy being butchered.  And in the subsequent "hell" scene they are sitting calmly reading a book or something.  Some of you know the song "sheep go to heaven, goats go to hell."  Well, maybe they do but it seems a pretty sweet deal for them.

It's my aim to show you what I see in my travels ... just beware the following are a bit disturbing! What's weird is families were taking their little kids through it; I wonder if they realized how terrifying it would be! 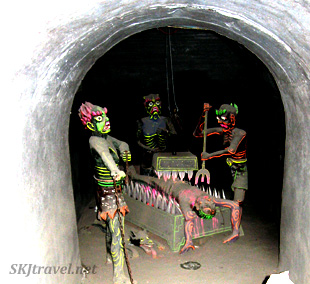 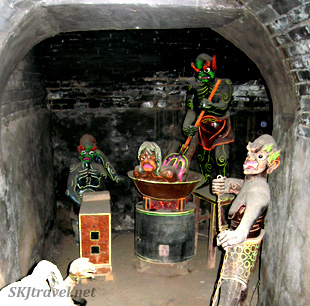 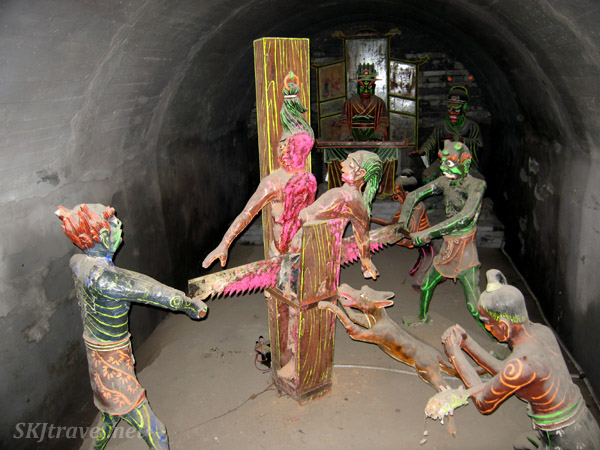 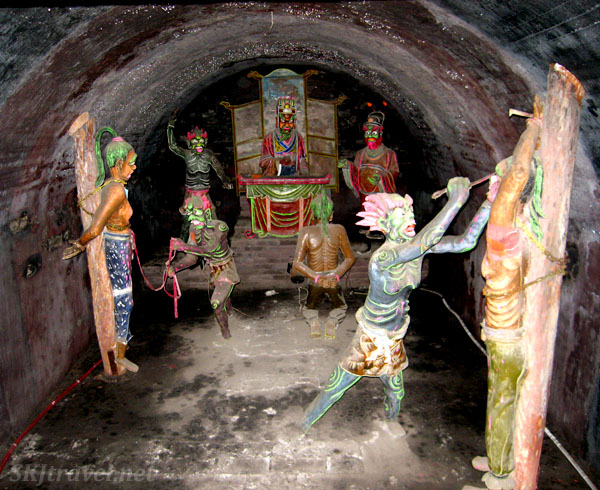 Let's end this little episode with a photo of a little more pleasant nature! In fact, I think this is one of my favorite photos from all my travels in China ... a monk's tunic drying on a clothesline in a back courtyard of the temple. 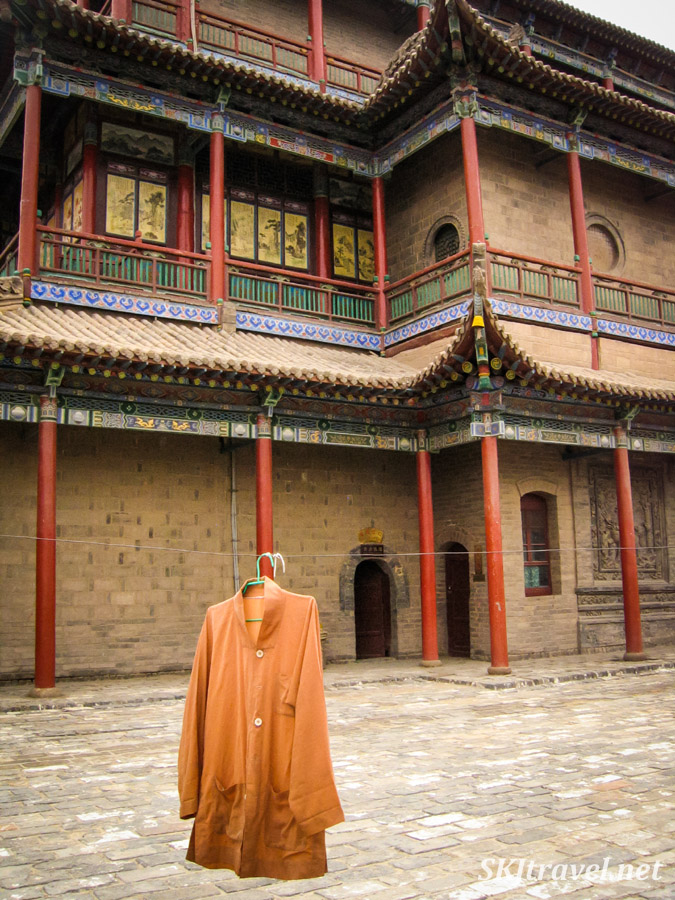