Matoke is currently the alpha male, having overthrown the oldest chimp on the island, Zakayo, some years ago. I just love Matoke. He is such a beautiful creature. He arrived at the UWEC in bad condition, reportedly very weak and covered in body lice. What a change! Now his coat is so thick and luscious, his body so stocky and well-built. Every time I’m processing photos of him, I say out loud, “Oh Matoke, you’re so beautiful!”

He is typically the chimp who opens the last door between the race track (the tunnel leading from the night enclosure) and the island with his hand or foot. He has broken the locking mechanism several times because he slams this thick metal door open with such force. If you have any doubt whether or not you should be scared of adult chimps, just watch Matoke open that door and imagine him kicking or hitting you with that force. I like watching him climb trees; he seems the most improbable chimp to be hanging out in the branches because of his size. 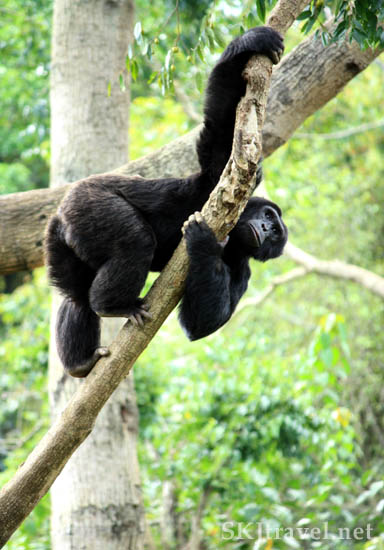 He is a greedy little pig, but I love him for it. He makes me laugh in his greed. When feeding them porridge, he is always elbowing out the other chimps trying to get more. He is also one that you have to watch in particular, if you get your hand too close to the caging with the porridge cup, he’ll reach through and grab you with his huge fingers and horrifically sharp nails. His mouth, when he opens it wide for you to pour in the porridge, is impressive. His lip-span is enormous, his canines wicked.

Matoke is the Luganda word for banana; the dish of cooked, mashed banana that is the staple of much of Uganda is called matoke. It’s the mush that I had to learn to stomach at lunch each day … It’s fitting that this guy is named after a food. His hoarding capability is awesome. I tried numerous times to get photos of him while collecting food, but he moved too quickly, they are all blurred. He runs (literally) around scooping up the yummiest fruits and sugarcane in his mammoth hands. The zookeepers said sometimes he stashes food under his armpits as well. 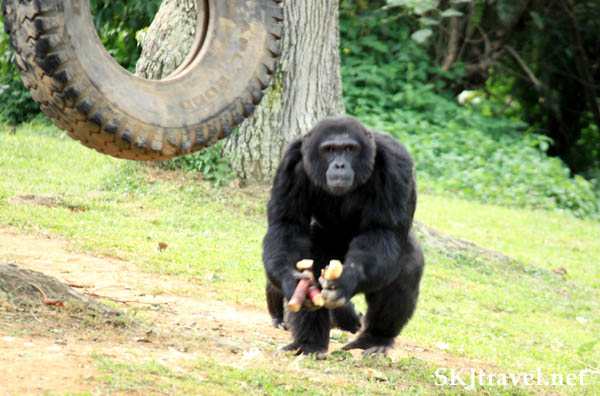 I would laugh and laugh at him, at how much food he would end up with in his hands, and how he would sit for a moment simply admiring the booty in his grip before eating it. 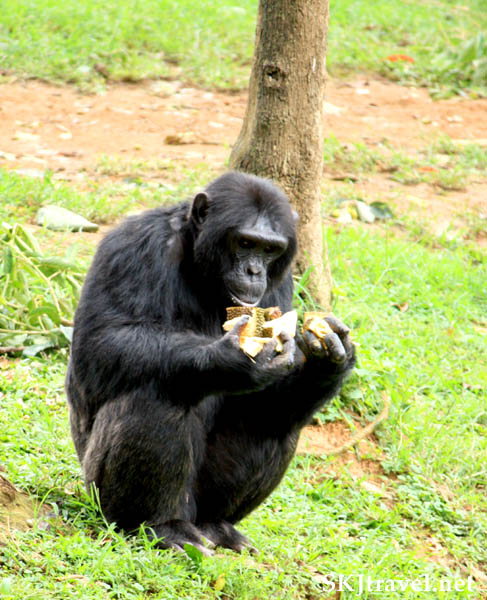 He is impressive to watch when he chases other chimps and tries to intimidate them. He pretty much always succeeds in the latter. He likes to pick up branches and run with them at others. Another favorite activity is to run at the tire swing and loop his arm through the tire and swing it around wildly.

He’s a bully, and yet he also seems to be one of the most contemplative creatures when he is calm. And numerous times I witnessed him being almost protective of and kind to the littlest chimp, Nepa. This was adorable, massive Matoke and little Nepa sitting next to each other. 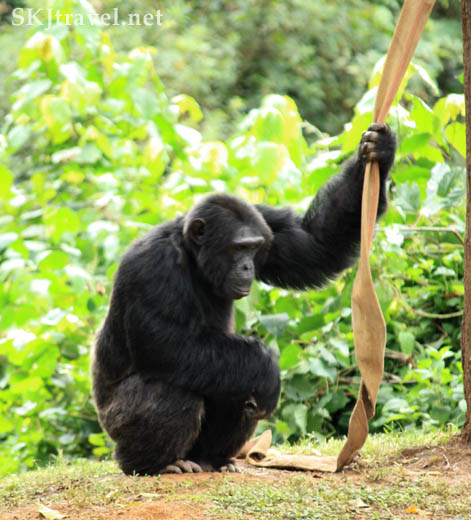