Snake!! Adventures with humongous pythons, and what I've been eating in Uganda

It’s with some degree of satisfaction that I report the death of Martha. After being mortally wounded – by the cleaning ladies 2 days ago, it would seem -- she quietly expired on the mottled yellow linoleum sometime this afternoon, survived by her boyfriend. It’s with an intense degree of regret that I report Martha’s ghost has already arrived to exact vengeance on the household. Ghost Martha skitters here and there even running straight at me, making me dance a little jig whenever I encounter her. Ghost Martha is far more unpleasant than Martha, rest her soul. I put her next to a deck of cards here to provide you a sense of scale regarding the enormity I have claimed about her. 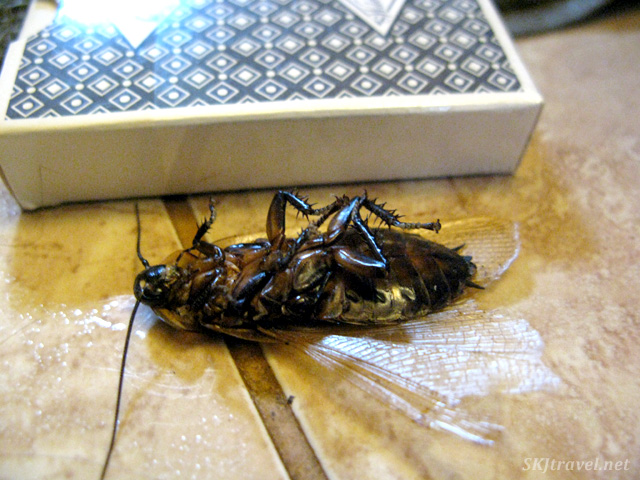 In other creepy critter news, today I handled two enormous pythons. One arrived at the center as a rescued animal who was in poor health. I was using the computer at the vet clinic, as was Stephanie, when Robert popped in to tell us about the new arrival. I grabbed my camera and went to check it out. I was somewhat taken aback by the size of the snake and was surprised when we were told it was dehydrated and underweight. Henry saw me with the camera and said “Oh let’s take your picture with the snake!” And before I could even reply or react, he and Wako rapidly approached me with this giant snake and draped it over my shoulders.

For several seconds, I was severely freaked out and made some exceedingly high-pitched girly noises and gestures. Basically, I was abjectly terrified. But honestly, it wasn’t more than a handful of seconds after which I began to feel more chill. Since, to my surprise, I hadn't died of fright or snake bite, I was able to mellow out. After a few photos, I then took the opportunity to inspect the snake and feel it. I was surprised at the feel of its skin, almost silky. You could see how the skin was loose and slack, and its back was almost bony. I didn’t really appreciate its unhealthy condition until we brought it to the snake house to put it in with the python already on display, who is about the same length but is fabulously larger. 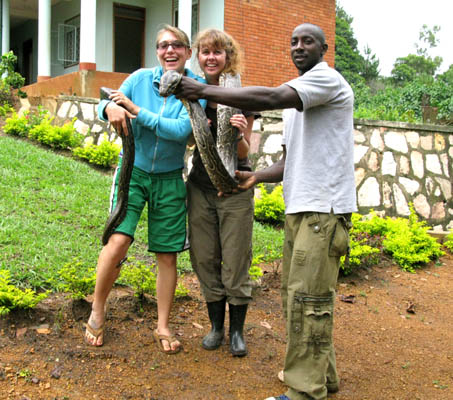 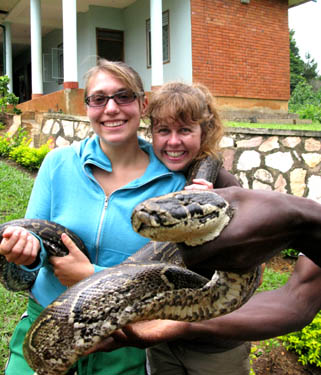 Carrying it to the tractor to drive it over to the snake house. 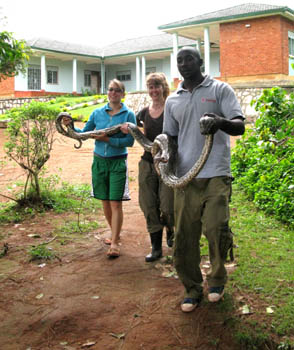 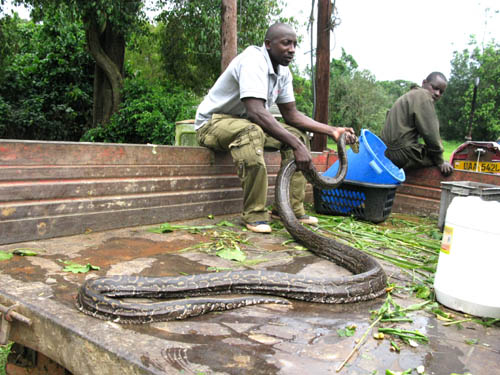 The zookeepers name the snakes based on their skin patterns. When you look closely, you can see that the patterns often look like letters. So they look for letters and compose its name. It’s true, you really can discern letters of the alphabet in the patterns!  So I was introduced to the other python, whom, if he hadn’t already had a name derived from his skin pattern, I would have dubbed "Mongo." Or "Mongo Squared."  I’ve never personally seen a larger snake than this one. Again, photos were proposed and before I could even blink, Henry had my camera in his hand and this astounding weight was being wrapped around my neck. So then we had this brief photo frenzy of everyone who was helping with the relocation getting in photos and holding all the other snakes in that exhibit…. There were visitors outside the exhibit looking in; they must have thought we were completely loony. I was literally staggering beneath the weight of the healthy python; even with Robert shouldering half the weight, my knees nearly buckled, it was so heavy. 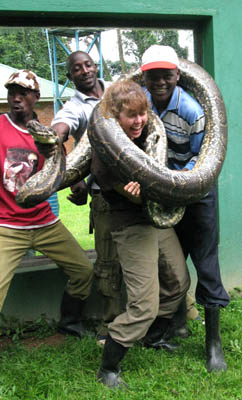 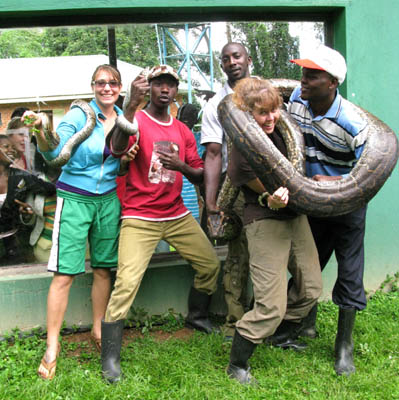 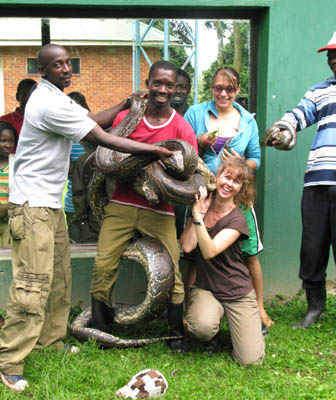 Look at the open mouth on the python!! So freaky. It eats 15 chickens for dinner about every 10 days. Never in a million years could I have forecast my participation in these crazy scenes, confronting one of my all-time biggest fears. 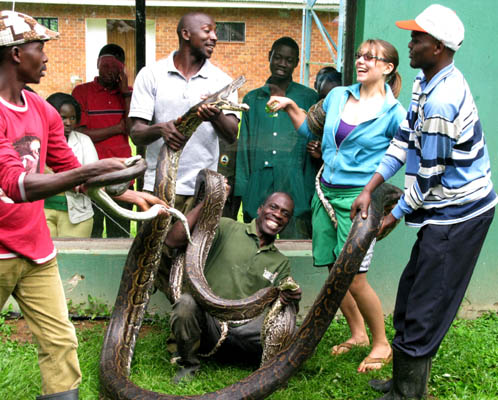 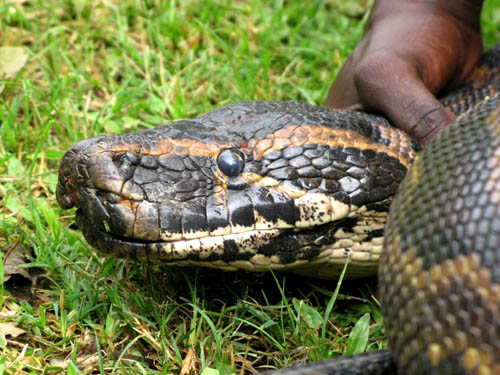 Now back to life in normal mode … Perhaps you’re wondering, what do I eat here? Breakfast and dinner are “regular” type of food at the center’s restaurant (daily breakfast omelet eaten with a kitty on my lap), but the lunch that is served to the center’s employees is traditional food … consisting largely of several types of mush and some kind of bone-laden meat with the broth spooned over everything, and usually beans or some other vegetable. All scooped into a bowl and eaten practically like a stew.

A few notes: (1) Normally, I never mix my foods on my plate … everything has its discreet compartment on the plate, so I’m adjusting to this. (2) I’m a texture person in terms of food; something can be rendered inedible to me not by its flavor but by its texture, so eating several different types of mush also takes some getting used to. But I’m managing just fine. Really, everything is quite good. The matoke is the biggest staple, and is basically bananas cooked and then mashed, served warm (i.e. what I call mush). (The alpha male chimp is named after this.) I’ve learned in other parts of the country, different mush products are the staple, like cassava or millet. The broths that the meats are cooked in are quite delicious, so nearly anything can go down when soaked in that. (3) I’ve learned to eat without adding salt. Some of you will be doing a double take right now. Yes, even french fries are being consumed au natural. Mostly this is because people don’t understand what you mean when you ask for salt. One time I asked for it at the restaurant here to put on my omelet, and it caused quite a bit of discussion, and after a few minutes I was presented a small pile of salt on a saucer plate. But actually it didn’t take long to adjust. Many things here seem to have much more flavor than at home. Potato products, for example, like fries and potato wedges, etc., eggs, fruits. I even ate a hard-boiled egg with no salt … I was cringing at the thought but wanted to fit in with the rest of my gang snacking on them at the chimp house, so I ate it, and it was not even the same thing as a grocery store egg back home. It was perfectly yummy sans salt.

Last night I met a couchsurfing friend who lives here in Entebbe along with some of his coworkers and girlfriend for dinner. They took me to an orphanage which operates a small pizza restaurant in their courtyard and delivery service (!) two nights a week to help generate money for the orphanage. I believe I was told there are 14 children living there. We met the director, a very nice fellow. And the pizza was delicious. If you find yourself in Entebbe, find out about the Malayaka House pizza night on Tuesdays and Thursdays. Awesome pizza (drinks also) and a good cause.

Since we’re on the subject of food, here are a few pics of the food prep area in the chimp house and the storeroom where food is kept in crates; we pick up a new load of food twice a week. And the gas stove with one working burner. Also threw in a pic of Ngugi the deranged baboon, whose indoor enclosure is just outside the kitchen. He is indoors at night and while the outdoor cage is being cleaned. 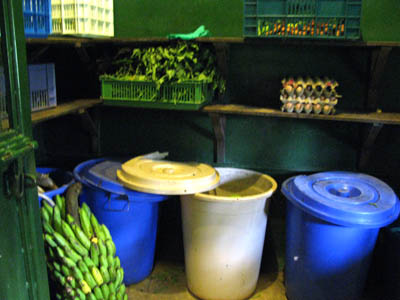 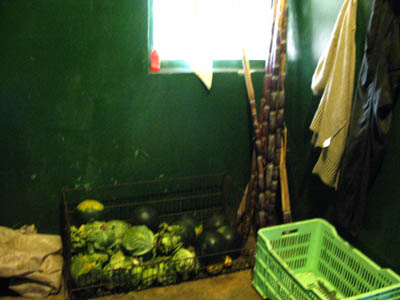 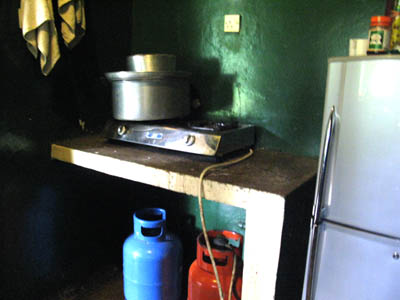 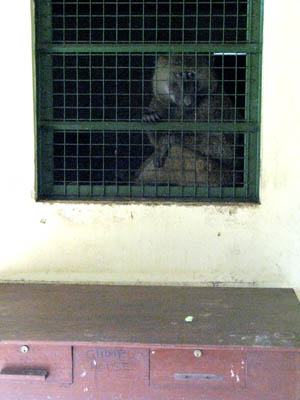 Now prepare yourselves for a flood of Ugandan men trying to immigrate to America. Now that they have been informed (by me) that bride prices do not exist, and that in fact, it is often the bride’s family who pays for any wedding ceremony, they are clambering to get over here. I had dinner Sunday with my Facebook friend I met the previous weekend. “There must not be any single men in America!” he said. When I told him there was no bride price to pay to get married, he said, “Come on!” As though I was pulling his leg. I was very amused at his incredulity that marriage can be so cheap. Then the kicker that the bride’s family often pays for a wedding, was almost too much for him to bear.

Another cheap thing that surprised him was the miniscule cost to have a domain name and internet site or blog site in America … the fact that anyone who can vaguely operate a keyboard can have a personal blog up on the internet to say whatever they want to the rest of the world was another difficult one for him to accept. “Come on!” he says again, as though this cannot be true. In Uganda, he has to pay something like USD 250 for a permit to have his website (travel safari services), which is an absurd amount of money in Uganda.

I also got a kick out of telling him how Americans treat their pets … how many of us have animals as part of our family, letting them sleep with us and eat with us and travel with us, and spoiling and pampering them. “Come on!” my friend says, as if I’m making this stuff up. It amuses me to see what surprises people about Americans. He is preparing to buy some land so he can grow some crops and raise livestock to start raising a bride price so he can get married. (He plans to remain in the city and hire people to run the farm.)

As my time is more than half over now, already I lament that this is likely a once-in-a-lifetime experience and I will never again get to spend my mornings playing with chimps and an hour or more each afternoon watching them on their island, how they interact, how they gather and hoard their food, how they play, intimidate, use their beloved branches as tools to grab things from the water. I can tell you, it will be hard to leave. Please send your thoughts to the rain clouds here to stop raining in the mornings ... as soon as we get a dry morning, we theoretically get to bring the baby chimp out to play.