The Shrinking Past: More Mining Memories in Colorado

A few more words from our 4x4 driving trip based in Breckenridge, Colorado, with a little more Colorado history and photos. To me, the history is so much more accessible when you can still see the evidence of it in the remaining ruins which will dwindle with each passing year.

Before the gold rush in the Colorado mountains, about the only people who had reason to be living there besides Native Americans were fur trappers. Individuals and wagon trains might pass through the area on their way further west. In 1806 in what would eventually become Park County, a trapper told the famous explorer Zebulon Pike, who was mapping the western lands acquired in the Louisiana Purchase for President Thomas Jefferson, that he'd found gold in the South Park basin. At that time neither man was interested in gold -- which seems almost incredulous given the crazy gold fever that possessed so many thousands of people half a century later. But the trapper was only concerned with beavers (which were quite lucrative at that time) and Pike was focused on completing his report.

When a prospector found nuggets of gold in 1859 near what would soon become the city of Denver, the discovery triggered a stampede of gold-seekers and families looking for fortune in the Rockies. Within a year and a half, the population of the area known as Colorado jumped from a few thousand Native Americans and a few hundred mountain men to more than 30,000 people scouring the mountains for their personal pot of gold.

It was this 1859 gold rush that inspired the creation of the Colorado Territory in 1861 -- a space (the same as the current state boundary) drawn around the intersection of the Kansas, Nebraska and Utah Territories, extending down into the New Mexico Territory. So my state took chunks out of those four territories to make its own.

About a third of those first rushers came to Park County where miners found millions of dollars of gold. Check out my post on South Park City to see what it was like living in these early mining towns.

Wise Mountain is within the network of 4x4 roads that connect between Breckenridge and Montezuma near Keystone. The cabin on Wise Mountain was built in 1878 and used by the Wise Mountain Silver Mining Claim. The mine shaft was an impressive 1,200 feet from base to summit. The cabin sat above a mining town, Swandyke, which like so many, has all but disappeared. 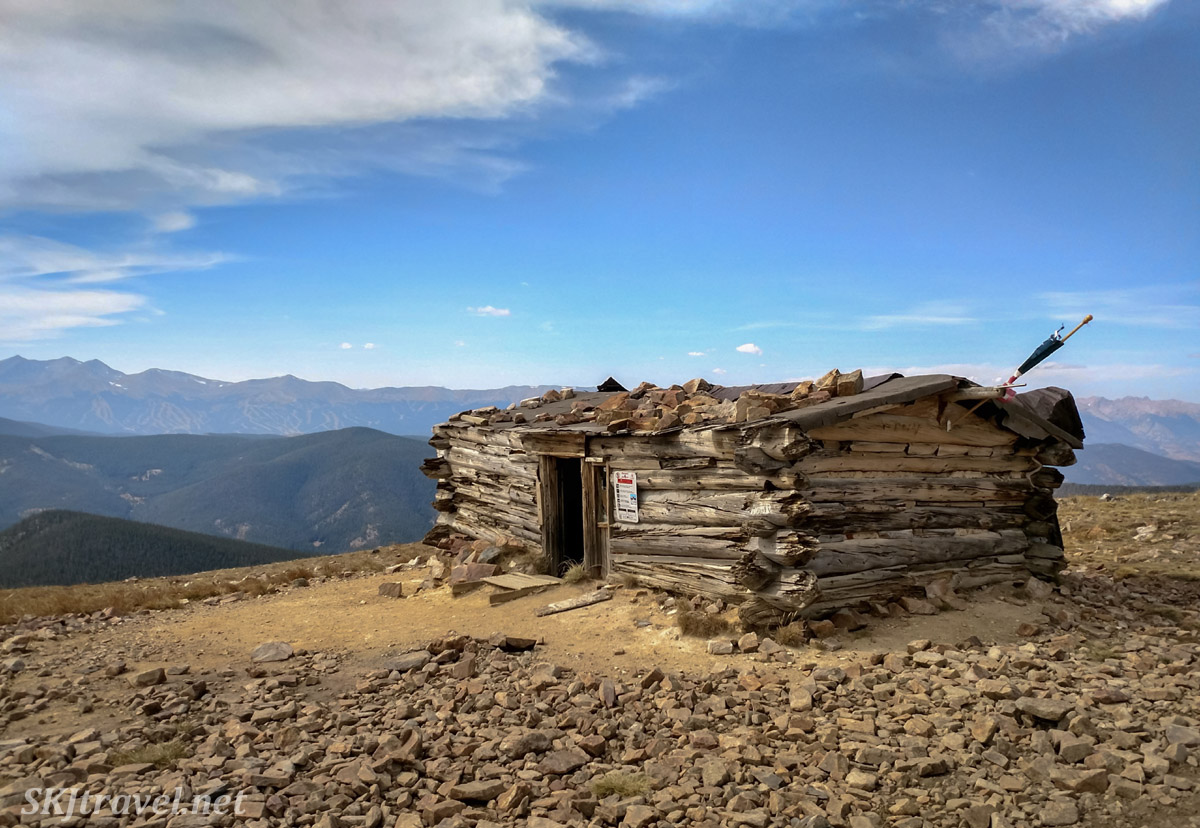 Anyone working up there above tree line had sweeping views of the surrounding area. It's an "I'm on the top of the world" feeling. Let's see if you have that Carpenters song stuck in your head now for the rest of the day.  Even though there is little flora besides low tundra ground cover and few fauna beyond some cute rodents, I think the colors of the mountain rock make a pretty picture. 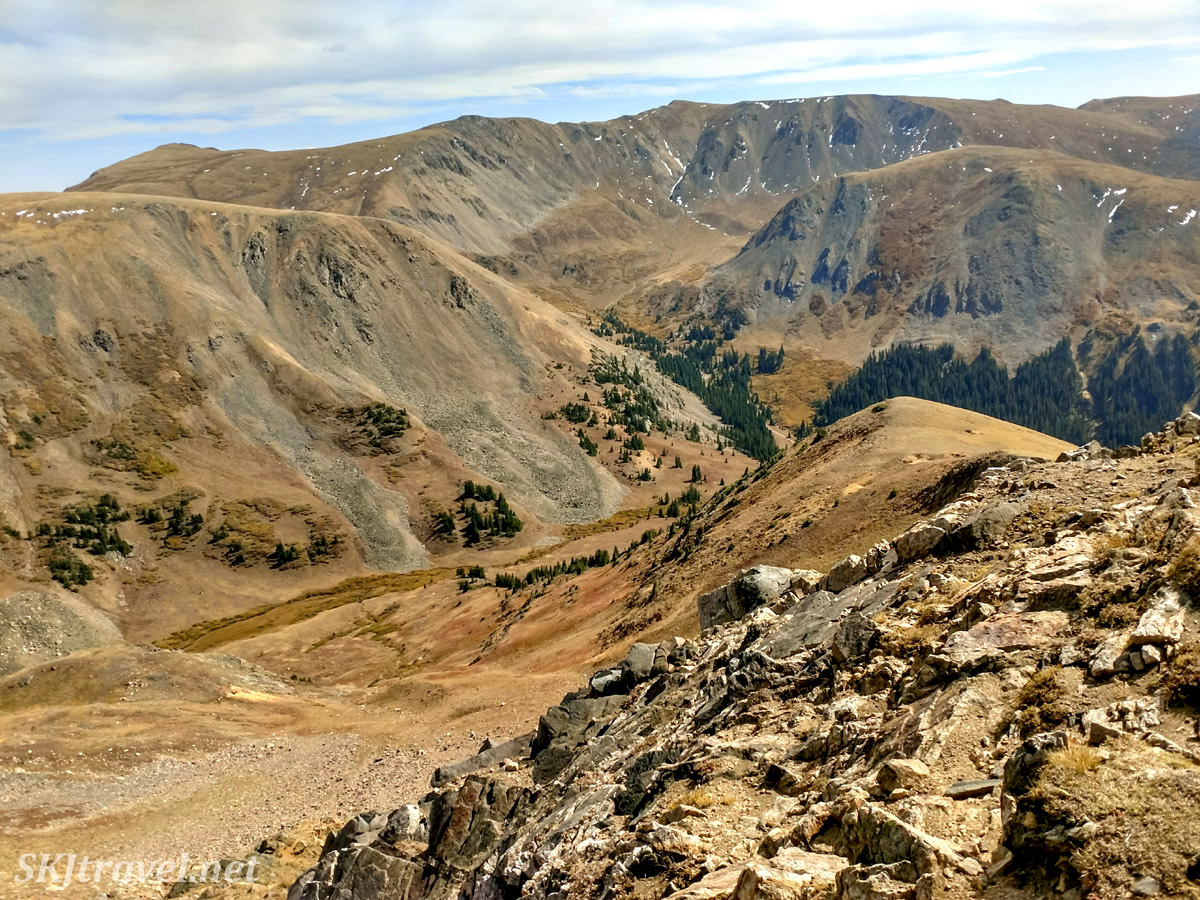 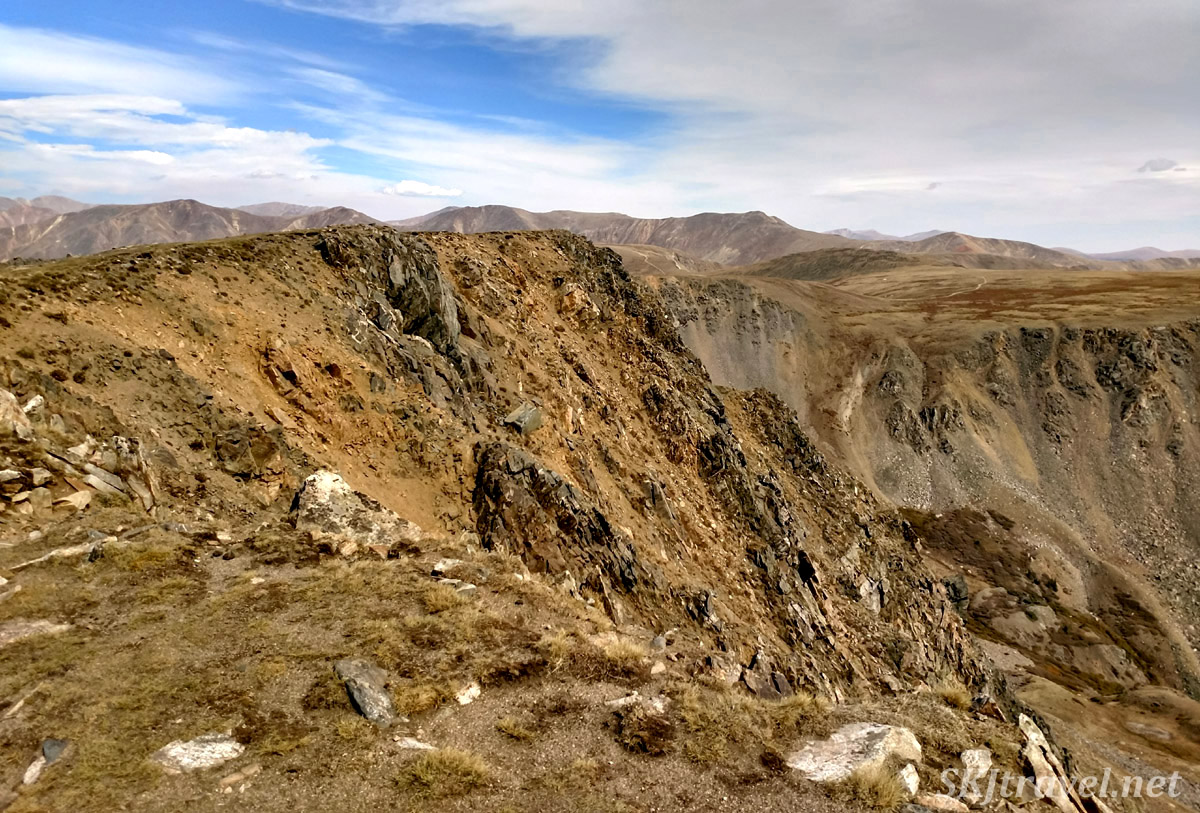 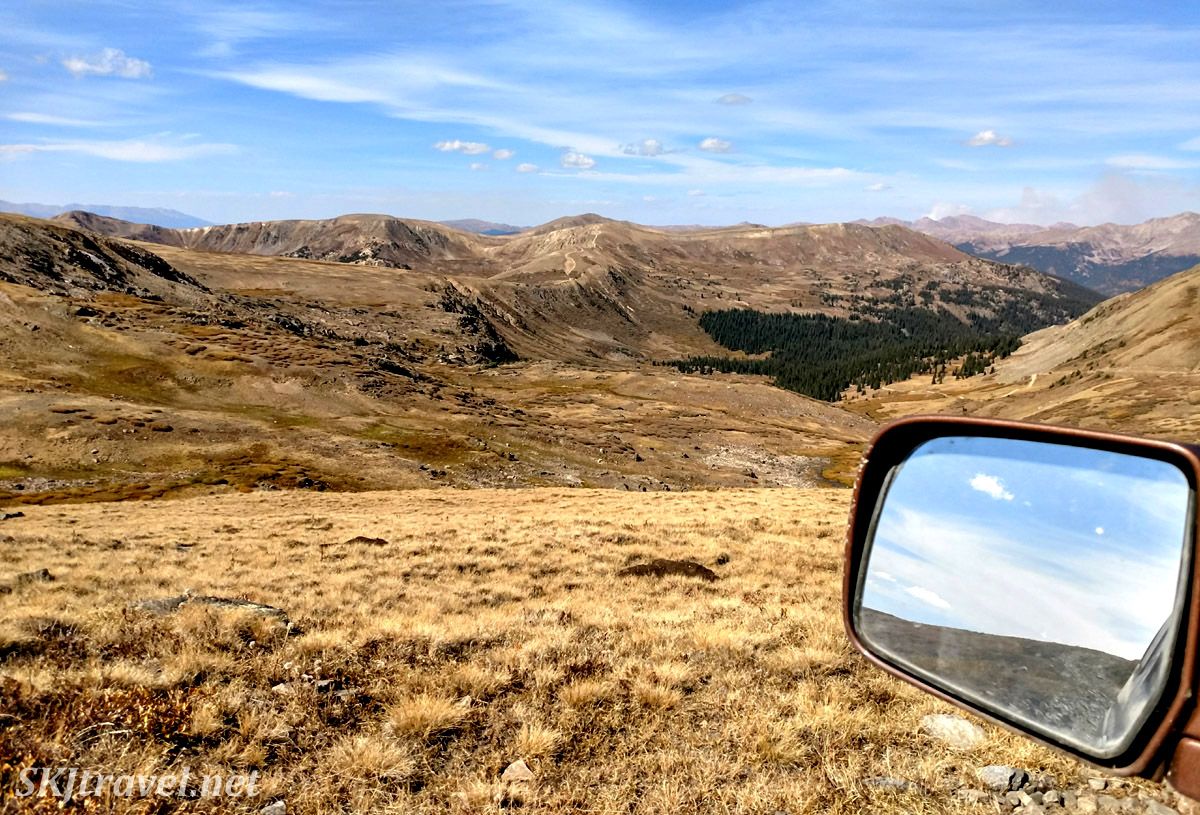 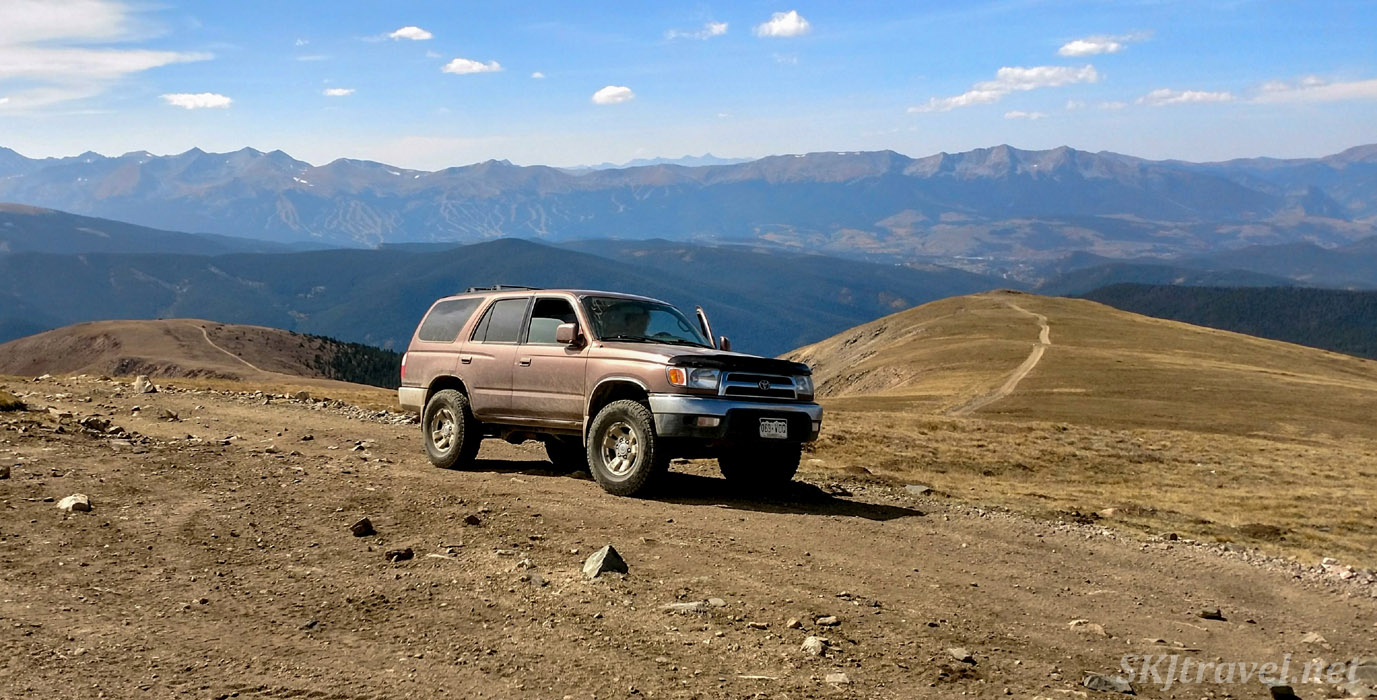 North of Breckenridge on Hwy 9, Tiger Road (CR6) leads into Georgia Pass. Erik had seen a point on one of our trails apps that said "Masonic Monument." We decided this sounded of interest and used COTREX to arrive at the spot. We looked around and around and found a small stone commemorative marker that was the "monument." It hardly seemed like something worthy of pointing out on a map considering how many larger and interesting unmarked sights are found in these mountains.

Curious, I researched after we got back to our condo. And what I found was very surprising. I didn't take a photo of it because I didn't realize at the time its significance. So as a previous paragraph ended with the observation that so many mining towns have disappeared, here is one of the most remarkable examples.

The stone "monument" does in fact mark where the first Masonic Temple on Colorado's western slope was built. It's all that remains, apparently along with a cemetery, which we did not spy (but now I want to go back and find it), of what was once the largest town in Summit County (which at that time stretched west all the way to the Utah border) and was nearly voted the capitol of the Colorado Territory in 1861: Parkville.

Parkville was founded in 1859 when placer gold deposits were discovered. This means miners panned the gold from rivers rather than digging mine shafts into the rock. Only two years later, Parkville had 1,800 residents, and miner's cabins filled the area. These miners were among the luckiest in Colorado's mining history. I read they could pan up to $10,000 in gold dust in a single summer. $10,000 in 1860 was an enormous amount of money -- a typical day's wage for average people was maybe $2 at best. It makes me wonder what those miners did with all that money. Did they blow it all in the saloons, did they retire in little mansions, did they invest and start wealthy family legacies?

Parkville was a rockin' town with a brewery and three theaters. It even had a private mint so people could do business easier than with bags of gold dust. I'm curious how large a bag filled with $10,000 of gold dust would be! They minted $5 and $10 denominations, I'm also curious how big of a pouch of gold dust you would plop down to get a $10 coin.

So what happened to the town? It basically destroyed itself, destabilizing the mountainsides by deforesting them and then using high pressure hoses to wash down gravel so it could be sifted through to extract the gold. Rock slides eventually buried the town.

So we passed by the buried town of Parkville and didn't even know it. But we had a lovely drive on the Georgia Pass road, passing Mt. Guyot whose summit is just shy of 13,400 feet. 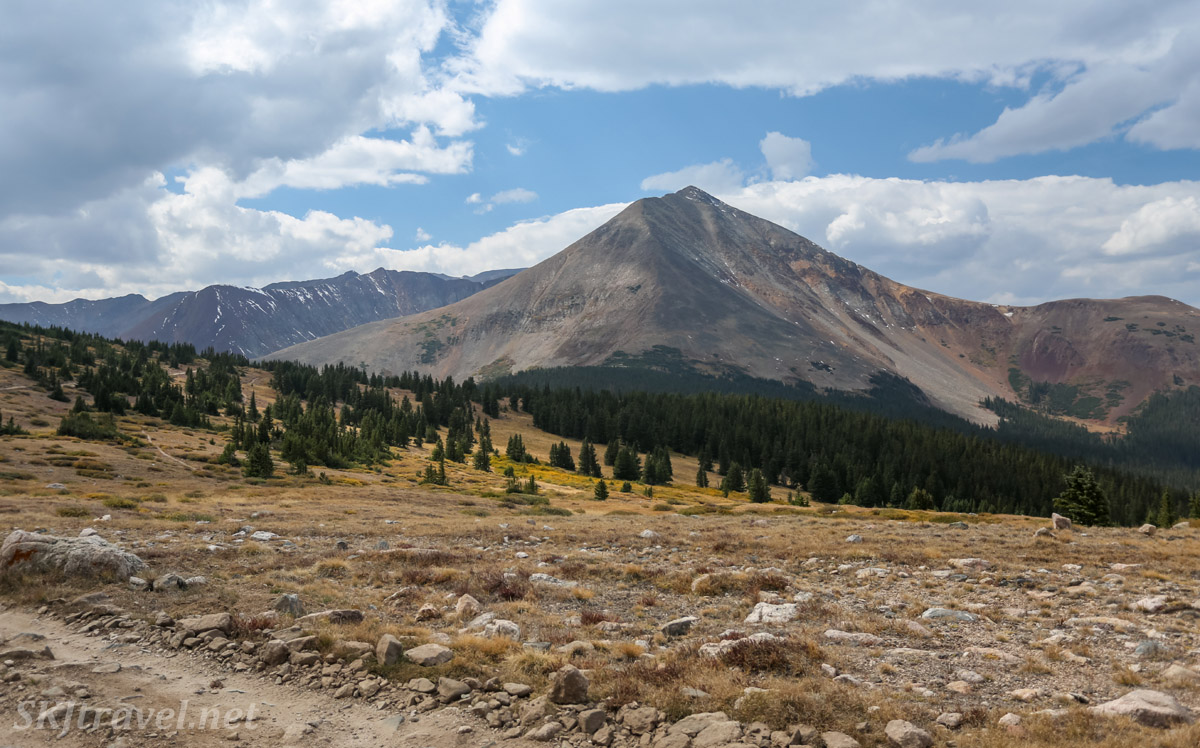 We took a delightful lunch break with little pikas calling from the rocks around us. 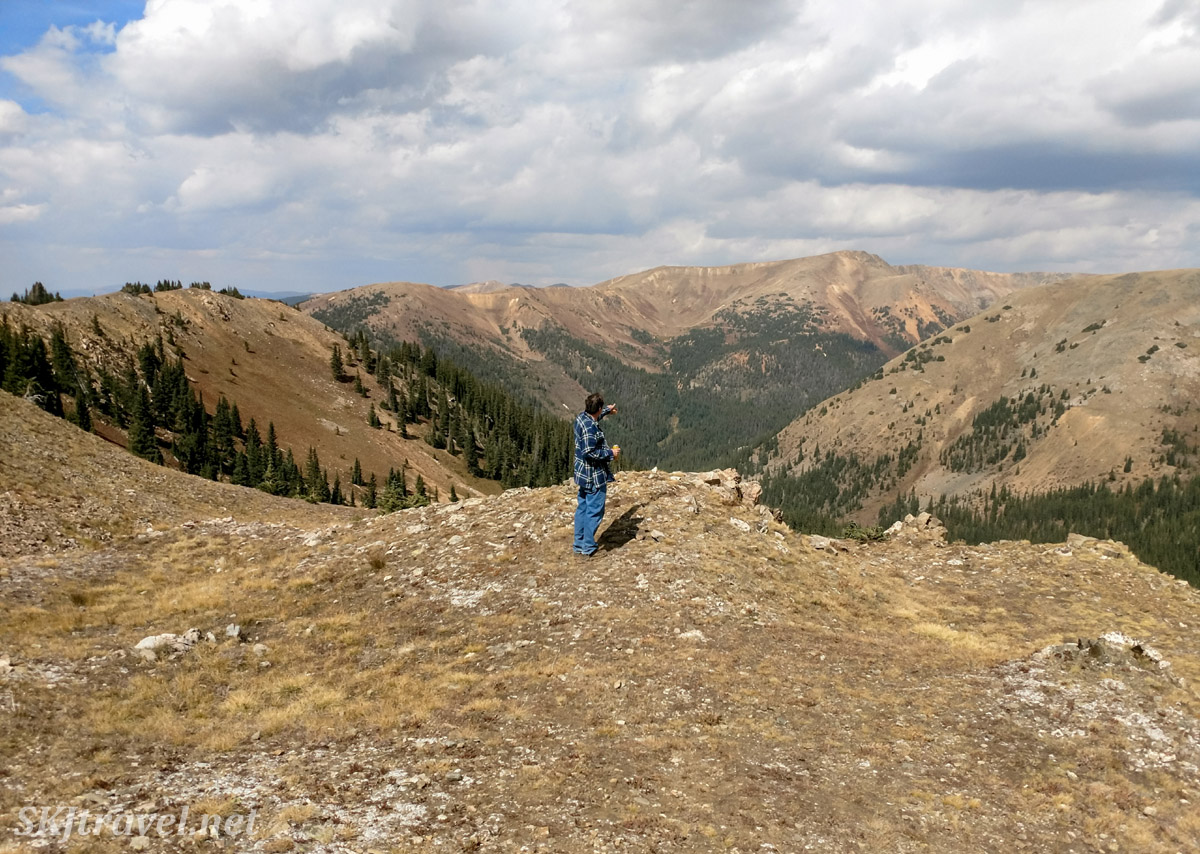 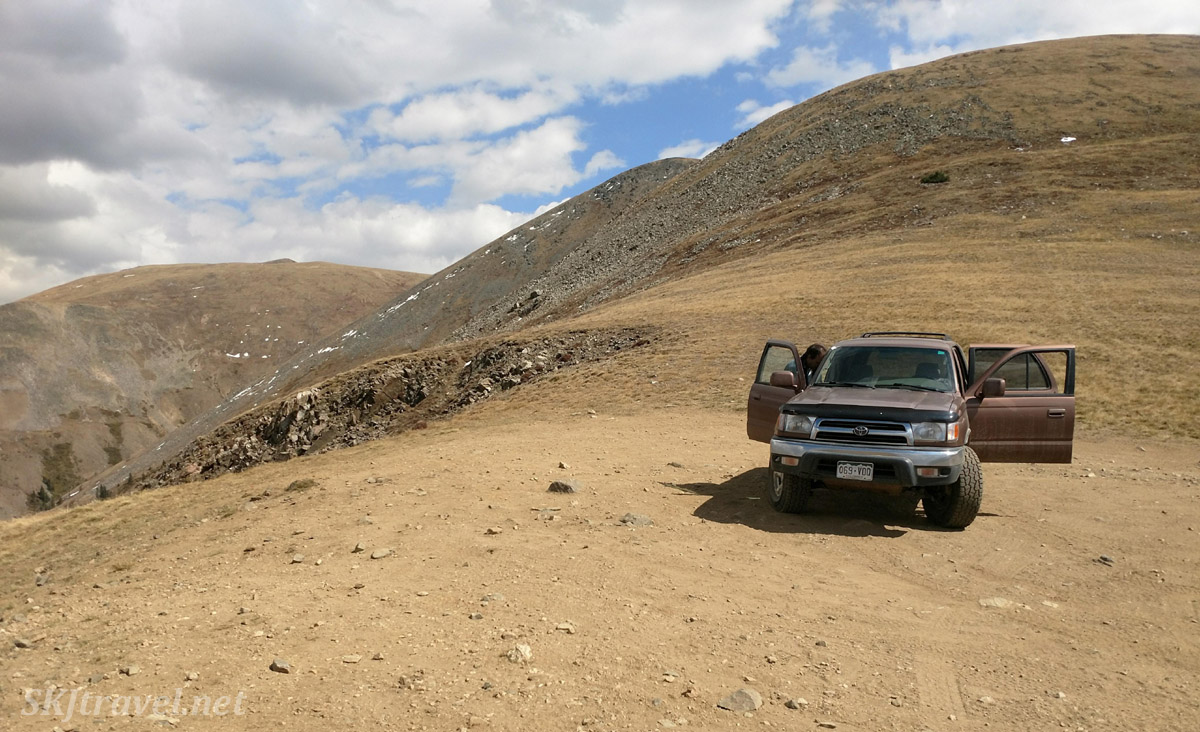 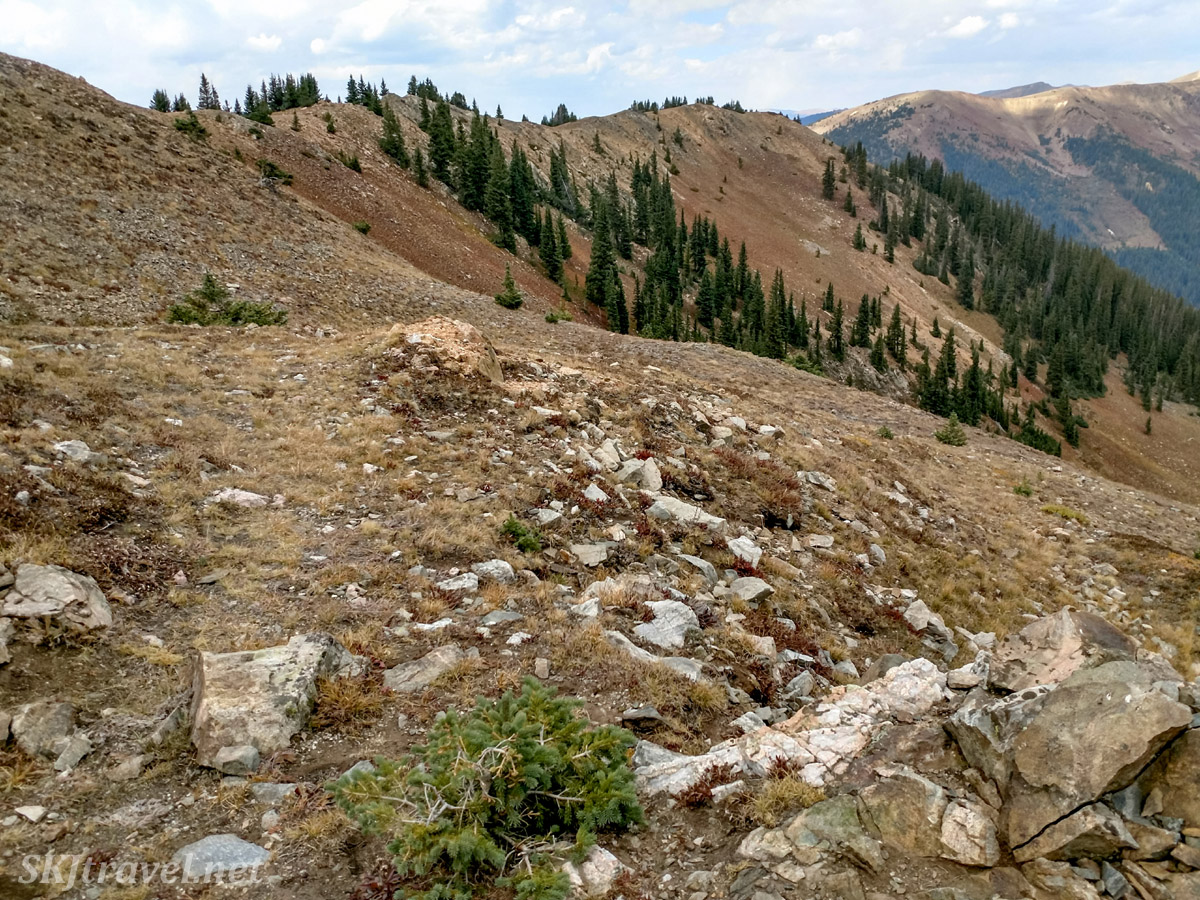 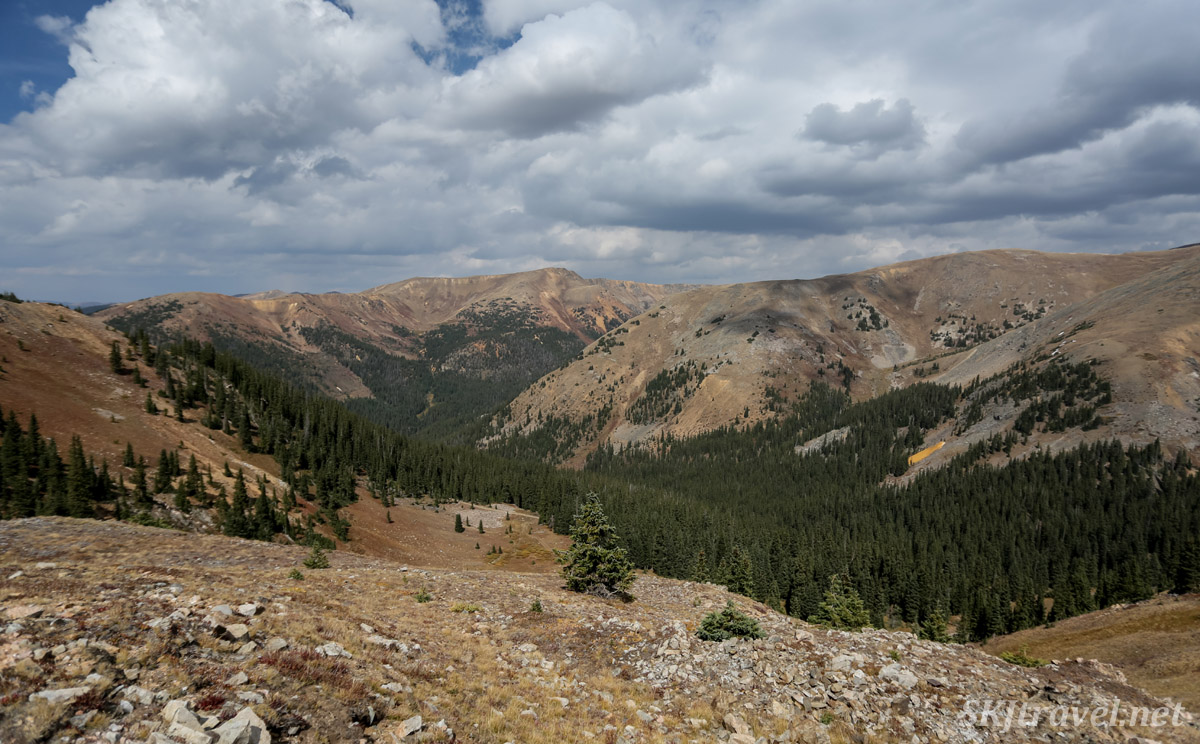 Near the end of the day we found ourselves descending SOB Hill (really more of a pitch at the bottom of a longer, less challenging 4x4 trail). We didn't intend to go down this trail as I'd seen the rating of it and while Erik would surely be competent at it, we also were on vacation, not on our home turf, so we didn't want to risk injuring our 4Runner, Chewie, and not being able to drive home. However, we inadvertently ended up on it because I managed to screw up my phone that afternoon (big surprise -- I'm incompetent with it) and I couldn't log in to the COTREX maps we'd been using, so we were winging it.

We came to that pitch and it looked gnarly, but we saw another trail to the left and thought it was either a "chicken route" or the actual trail. So we followed it instead. It was easier but not easy. And after awhile it ended abruptly with a fallen tree across the trail. Absolutely no way around it and not enough room to turn around, so we had to back up the trail to the fork, which was even less easy. In the process, Chewie got injured but not so that we couldn't keep driving; we had to replace the rear hatch door after we got home, though. We realized then the gnarly section was in fact the trail and we had no option but to go down it.

It required some spotting, and so walking down the trail to scout the route, I managed to slip and fall and bruise my butt up nice and pretty. So Chewie and I were injured, so there were a couple moments of "SOB!" cursing. Otherwise everything went fine, but this cabin back on flat ground was a welcome sight (the flat ground more so than the cabin). And the outhouse. I often think old miners' outhouses are quaint. 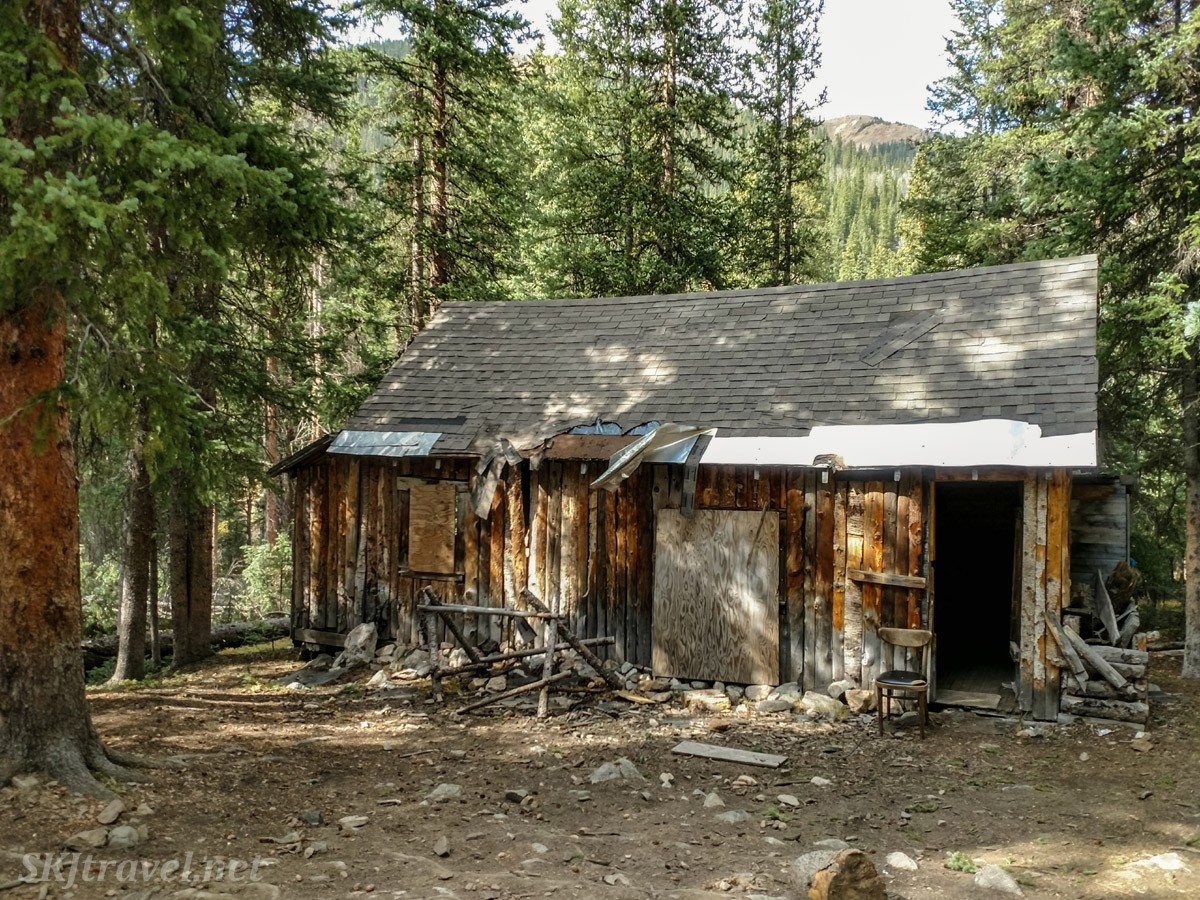 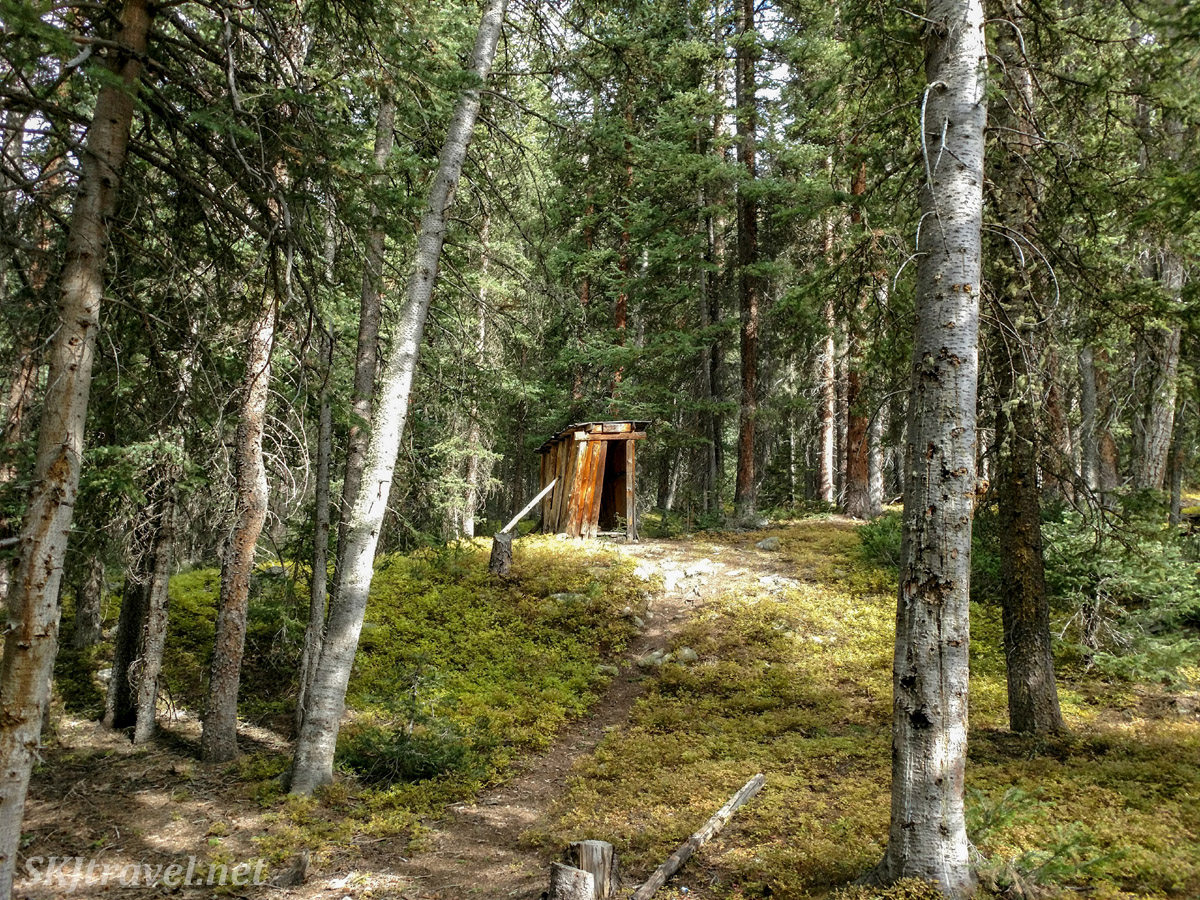 We stopped to take a picture of this pretty hillside with autumn aspens and colorful tailings on the way up Tiger Road. 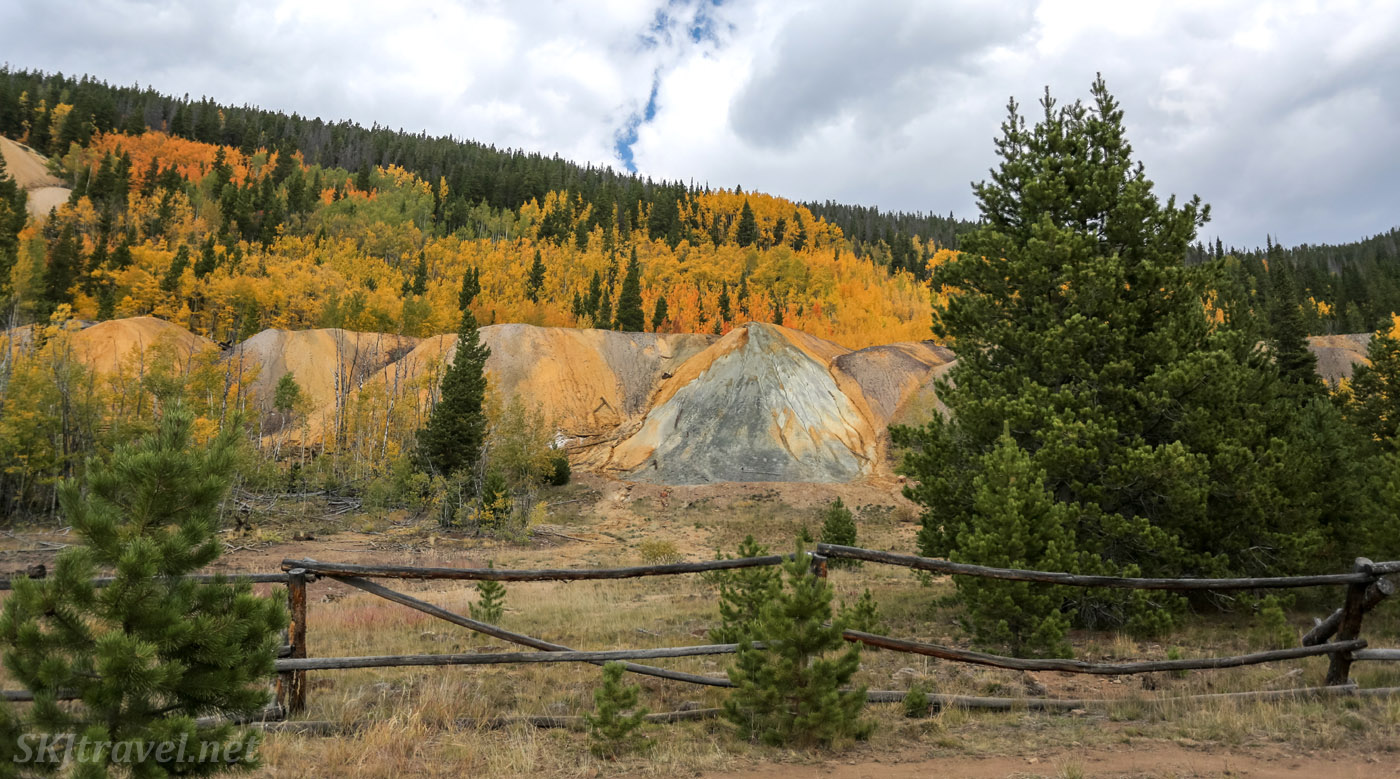 South of Breckenridge on Hwy 9 toward Alma, is the picturesque Magnolia Mill just above Montgomery Reservoir. What used to be the mining town of Montgomery, established in 1861, now lies underneath the waters of the reservoir which supplies Colorado Springs, quite a ways southeast, with water.  The town had a large dance hall and I read it sent President Lincoln a bar of gold from the Montgomery Mine. I guess the postal service was very honest not to nick a bar of gold, haha. I wonder how it arrived ... wrapped up in a box with a bow? "Happy birthday" "Top Secret: For Your Eyes Only" "To Whom It May Concern" ... I wonder how Lincoln reacted ... "ho hum, a bar of gold," or "woo-hoo a bar of gold!" 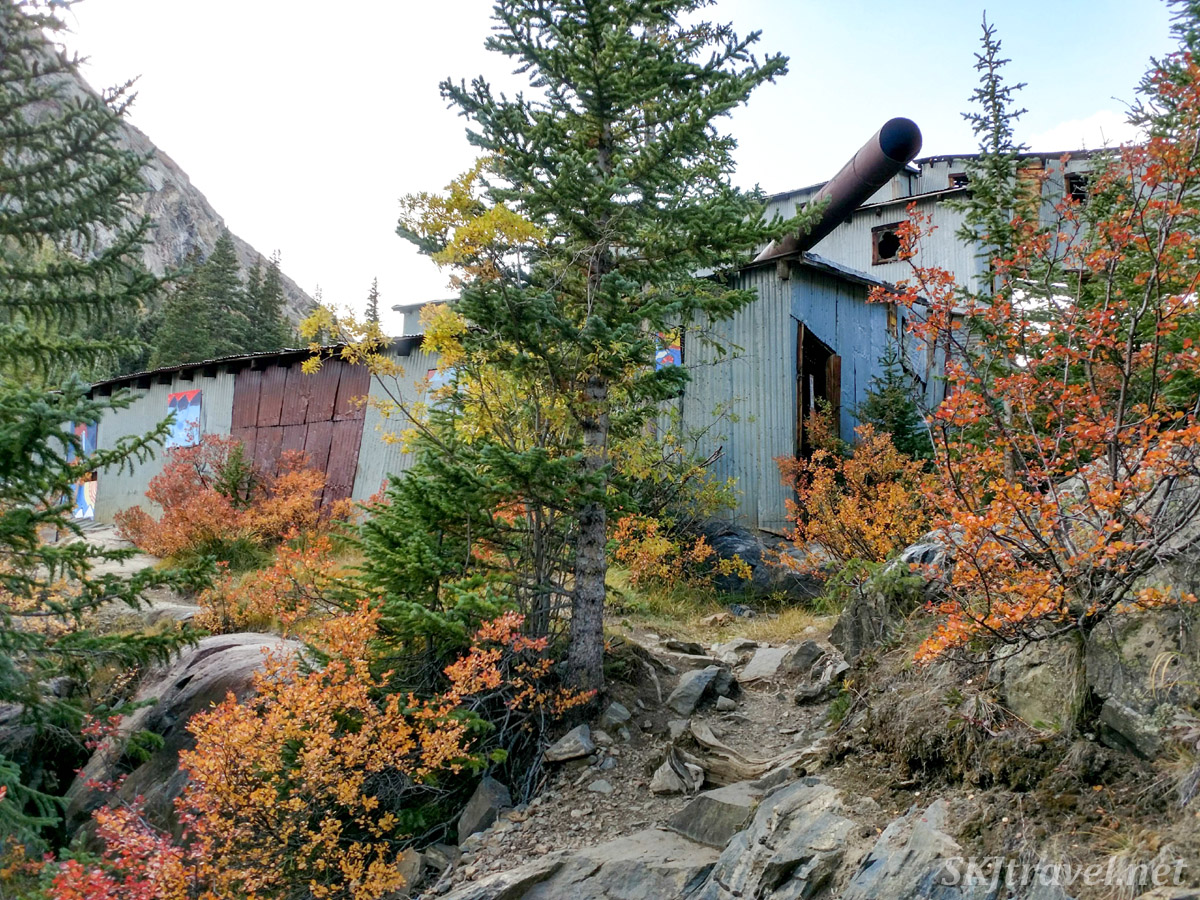 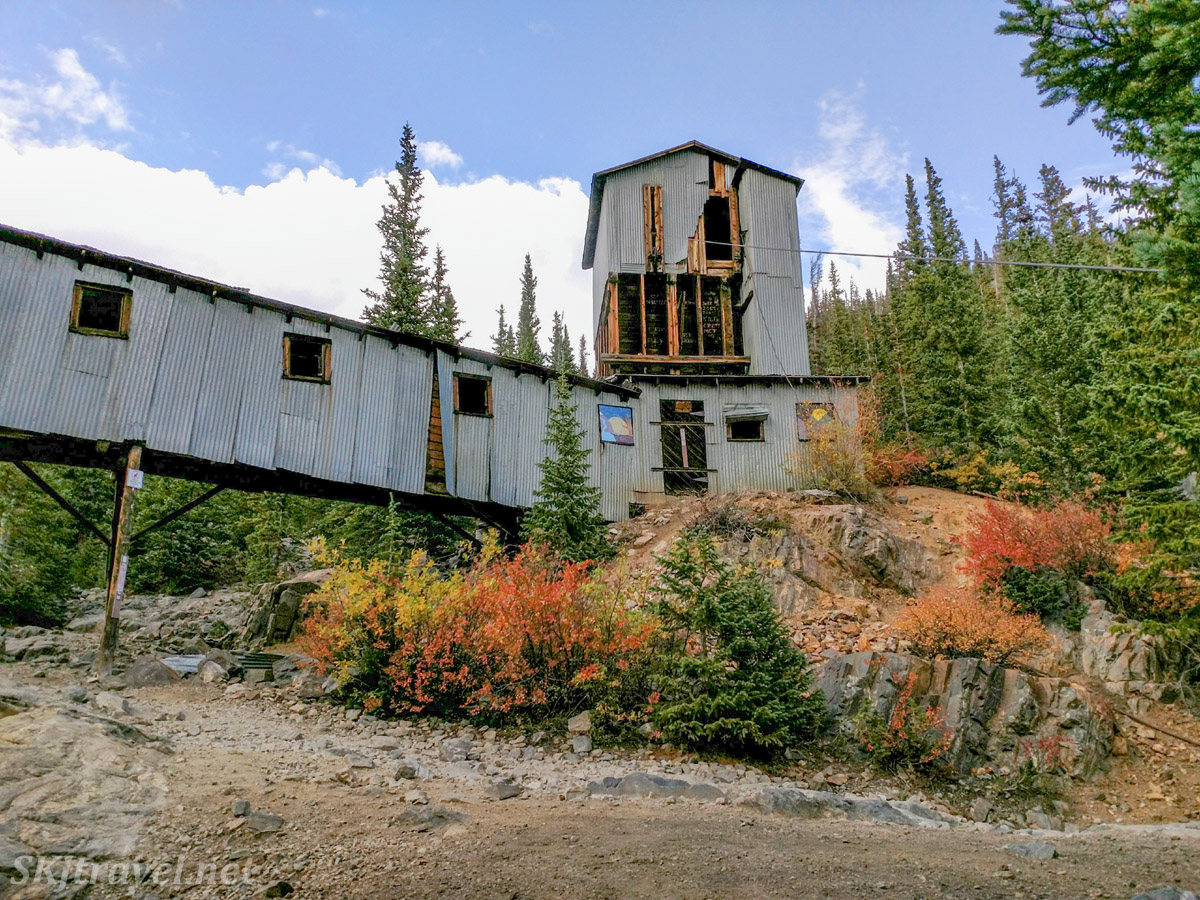 You can see that a bit of sheet metal has peeled back from a section of the walkway in the pic above. The breeze was gently knocking it against the structure making an eerie ghostly sound that gave the place a nice abandoned atmosphere. I saw it referred to as an ore walkway, ore probably traveled between the two buildings on a conveyor belt. 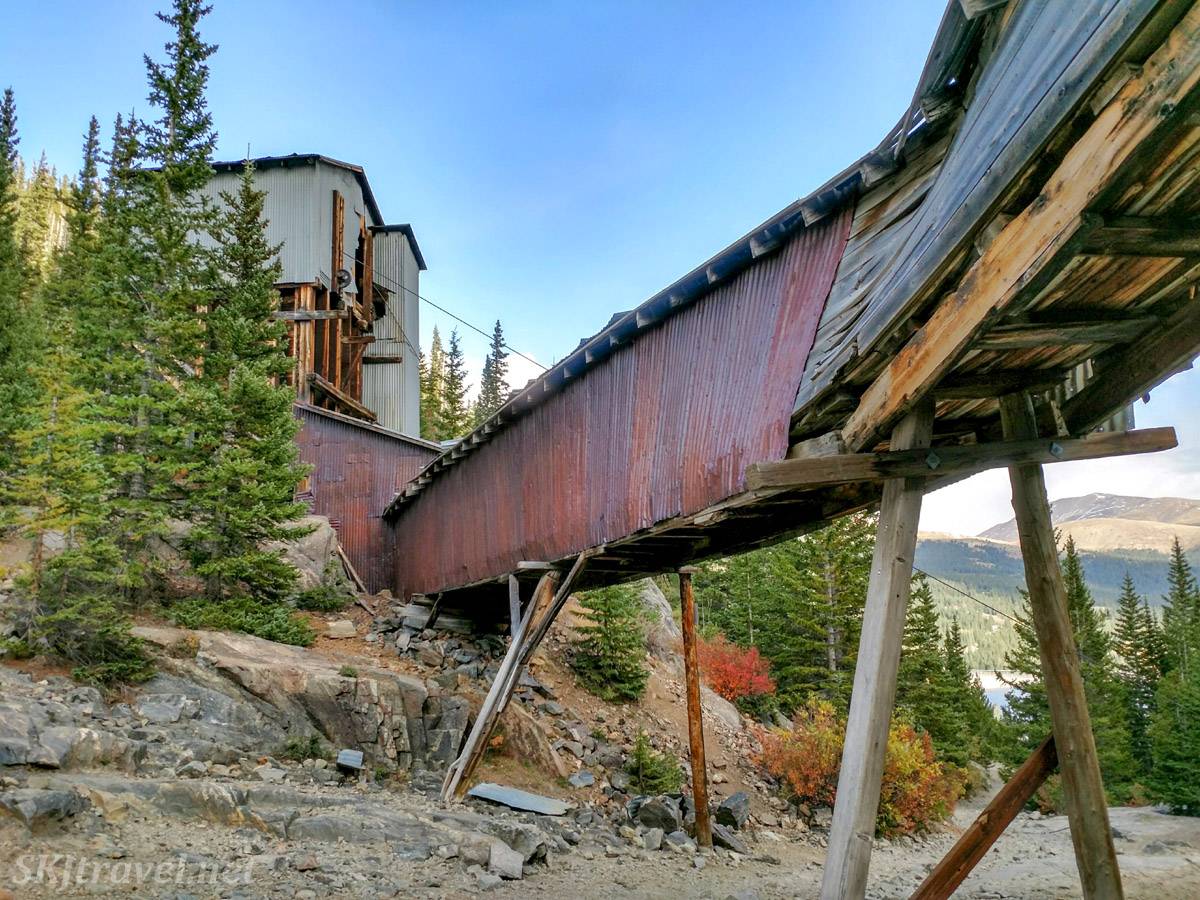 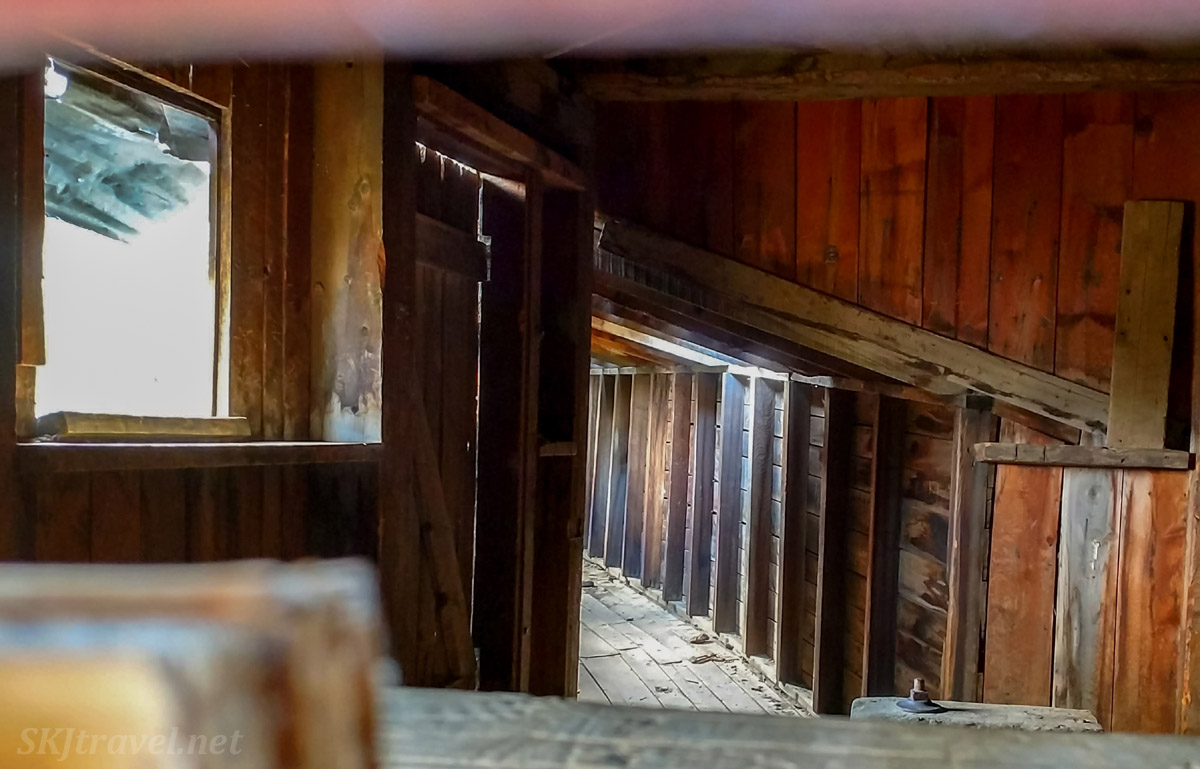 The original mill burned down -- a common fate of buildings in mining towns. It was rebuilt in 1930, which is what still stands now. Some of the large machinery is still inside in good shape (photo taken through a window). 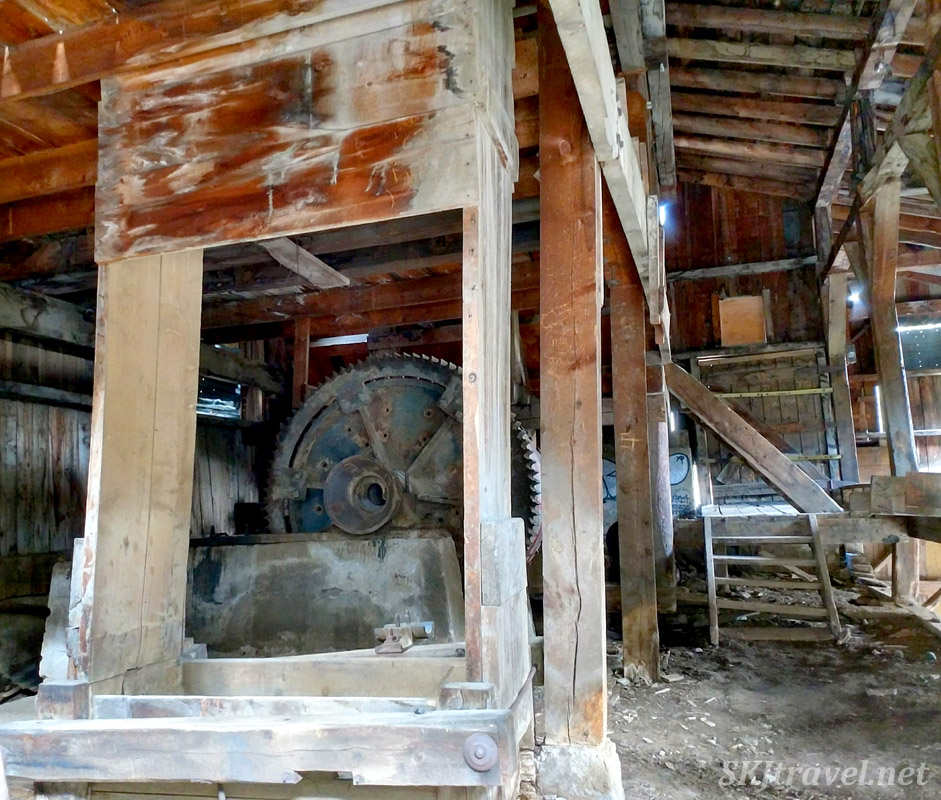 In the evenings we relaxed under a full moon in one of our condo's hot tubs. As this was during COVID, pool and tub activity was limited and controlled, so we had a hot tub all to ourselves, which was delightful. Staying in a condo, cooking our own meals and driving ourselves around in our own vehicle was a perfect vacation during this strange time of pandemic.