Dauntless and Peerless Mines - Clearly for the Hardy - Near Fairplay, Colorado

These are two pretty aptly named old mines, whose lodes were discovered in the late 1800s but are long abandoned, near Fairplay, Colorado. Access is from County Road 18, also known as Fourmile Road, just past the junction of Hwy 285 and Hwy 9 South. There aren't any real technical sections, but a high-ish clearance vehicle and 4WD would be super highly recommended for the Peerless, where we also encountered snow on the trail up there in September.

I was very disappointed in the lack of information on these mines on the internet. Sobering to realize how much credit I have come to give Google for presuming it knows everything!  About the only thing I learned is that they started as silver mines and later secondarily produced lead and zinc (after the collapse of silver prices in 1893). As for the history of them, I found barely a few scraps. If you're reading this and can provide more information than me, send me a message and your sources!

The ore from the Dauntless Mine and the Hilltop Mine was processed at the Leavick Mill alongside Fourmile Creek. 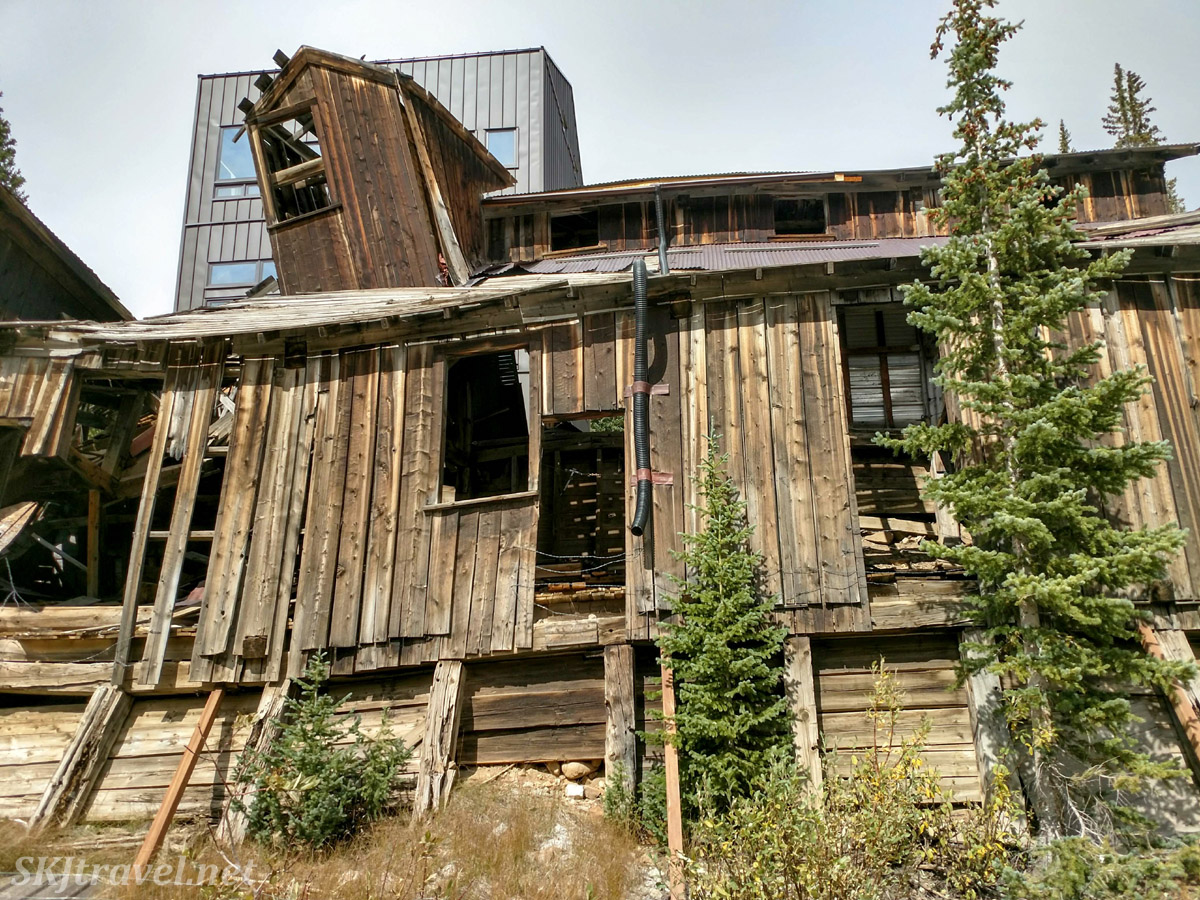 Following is some interesting (in my opinion) info I snagged from a brochure (mostly verbatim from a PDF) put out by the forest service. They put out a whole series of brochures about the South Park area. If you notice little round signs along the roadsides with numbers on them, they correspond to information in these brochures, so you can take your own informative auto tours. I picked mine up at the Fairplay visitor's center a couple years ago.

"The remains of the old Leavick mill on the right are a crumbling reminder of 1890's high technology. The first buckets of promise were brought to the surface [from inside a mine] by pulleys and hand labor. Then burros hitched to winches pulled the substrate into daylight. Later, tracks and ore carts streamlined the process, but burros still provided the power. The Hilltop Mine eased the burro's burden and added efficiency by constructing an aerial tramway to move its ore to this mill. It stretched 1.75 miles from the mine to the mill [!] with 125 buckets that could hold 400 pounds per bucket.

"Eventually railroad tracks were laid to the mill that anchored the town of Leavick which only had one street. Along that street, a store, post office, cookhouse, school and a few cabins clustered. The Hilltop Mine operated off and on until about 1920. [The Dauntless lies several hundred feet below Hilltop.]

"A common mine laborer could expect long hours, many dangers and low pay. For $1-3/day, including board, a miner toiled in dank and dusty tunnels. He worked in constant danger from falling rocks or cave-ins, from explosions caused by the buildup of gases in unventilated tunnel shafts, and from fires or snow slides that could trap him inside the mine. In the 1890's, this was a scene of bustling men and animals, puffing steam engines, and streams of ore cars."

Further up the road from the mill, we ran into a mama moose and her two children munching the bushes. 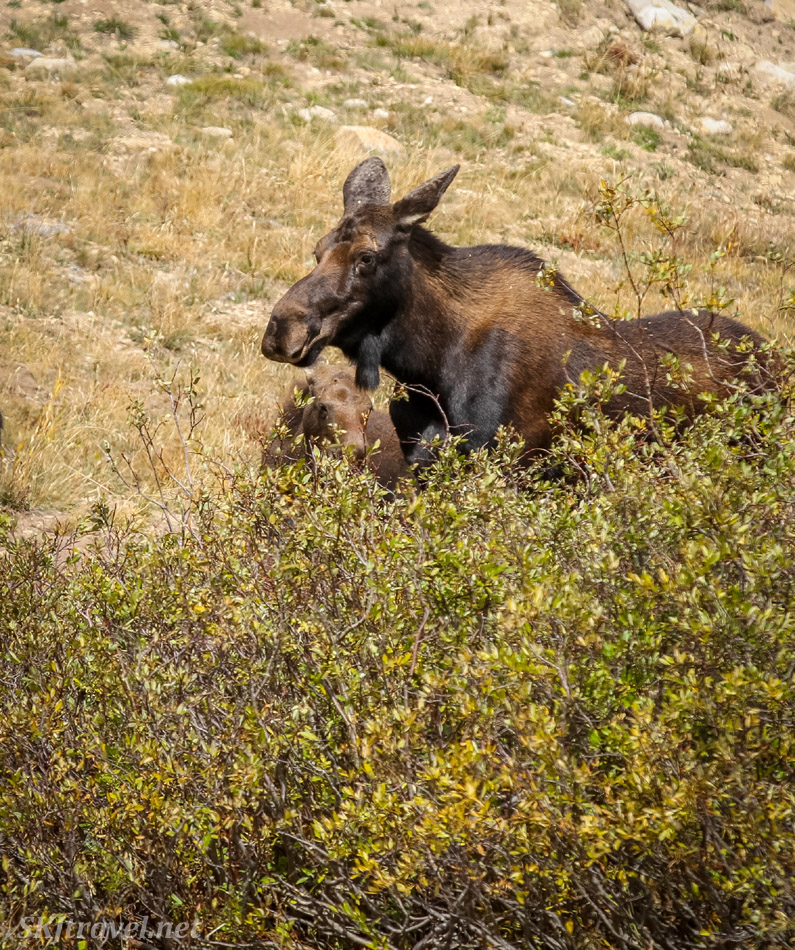 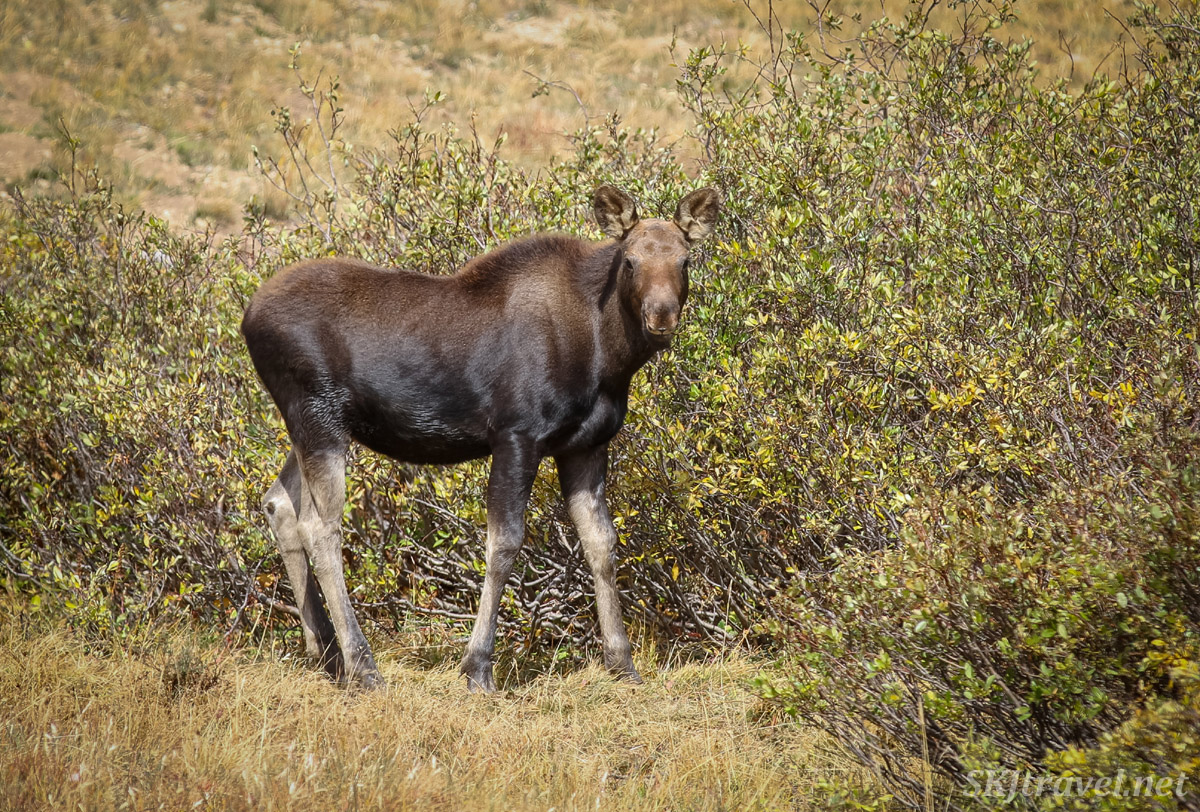 We didn't hike up to Hilltop Mine, but its name describes exactly where it is, nearly 13,000 feet above sea level. The hardiness of 19th century miners just astounds me ... they didn't have all our nifty technologies and materials. They carted supplies up in wooden wagons with burros, for heaven's sake, up super steep mountainsides to work and live in some of the harshest climate in the country, particularly through the long winters, living in wooden cabins and bunkhouses with virtually no insulation like we have today.

The road is closed at a gate at about 12,000 feet, so it's another 1,000 feet up to the Hilltop Mine. I didn't know anything about that mine at the time (error on my part), so we just walked up to the one we could see from the gate: the Dauntless Mine. Many people walk past both of these on their way to summit Mt. Sherman, yet another thousand feet higher, which is apparently about the easiest 14er to hike up. 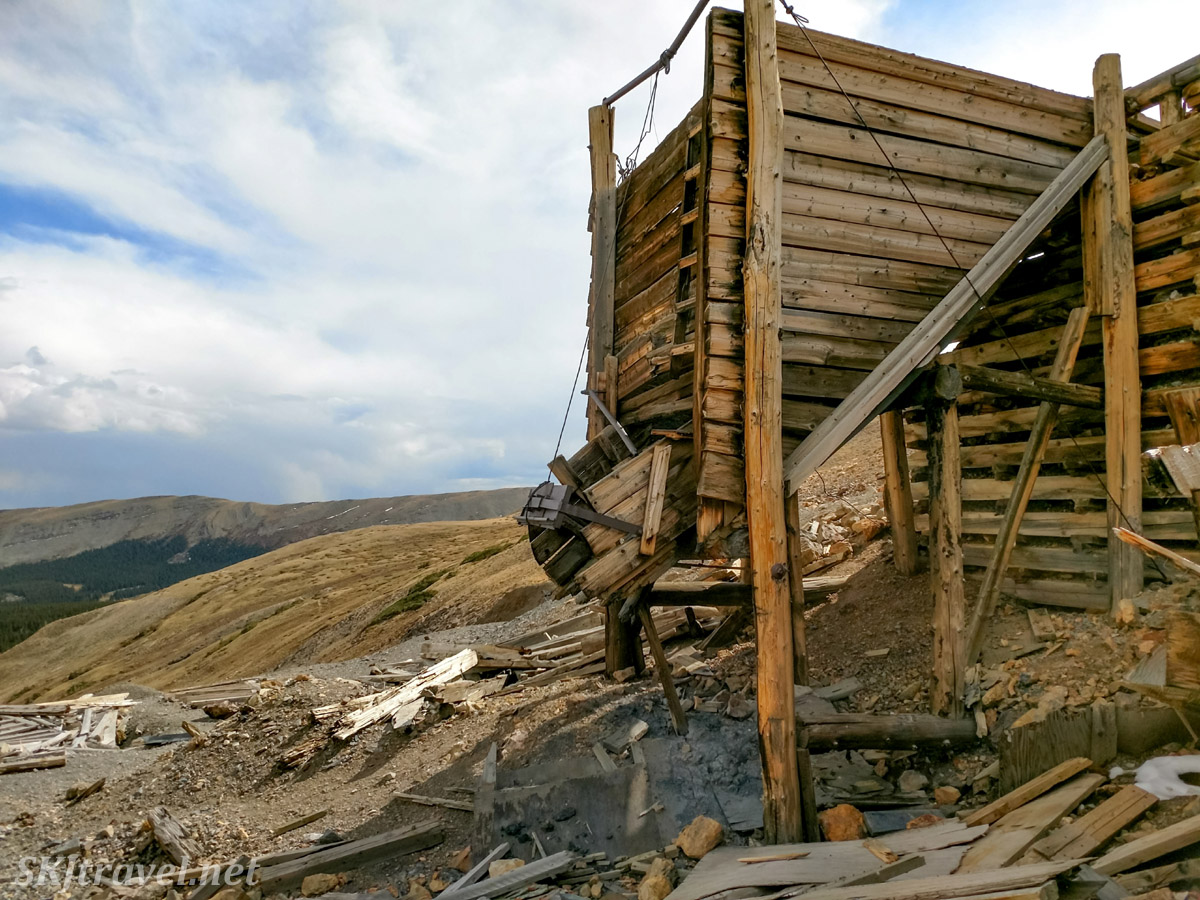 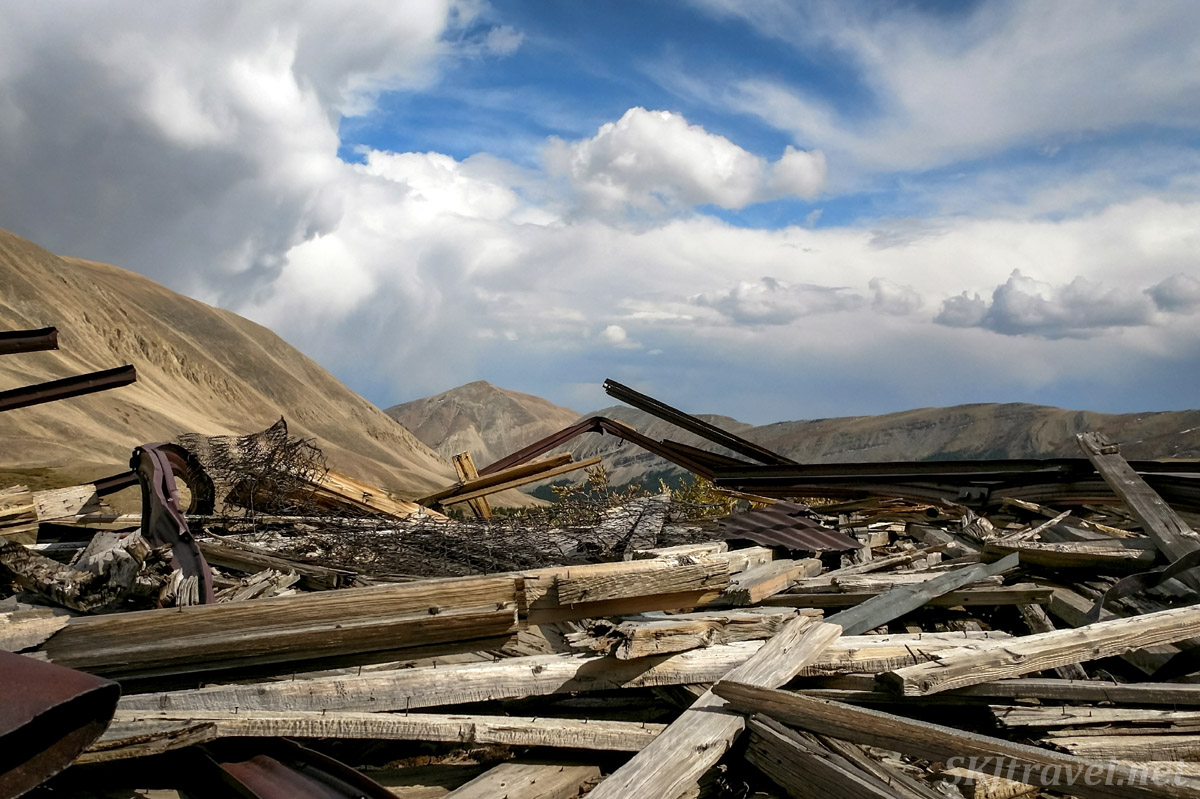 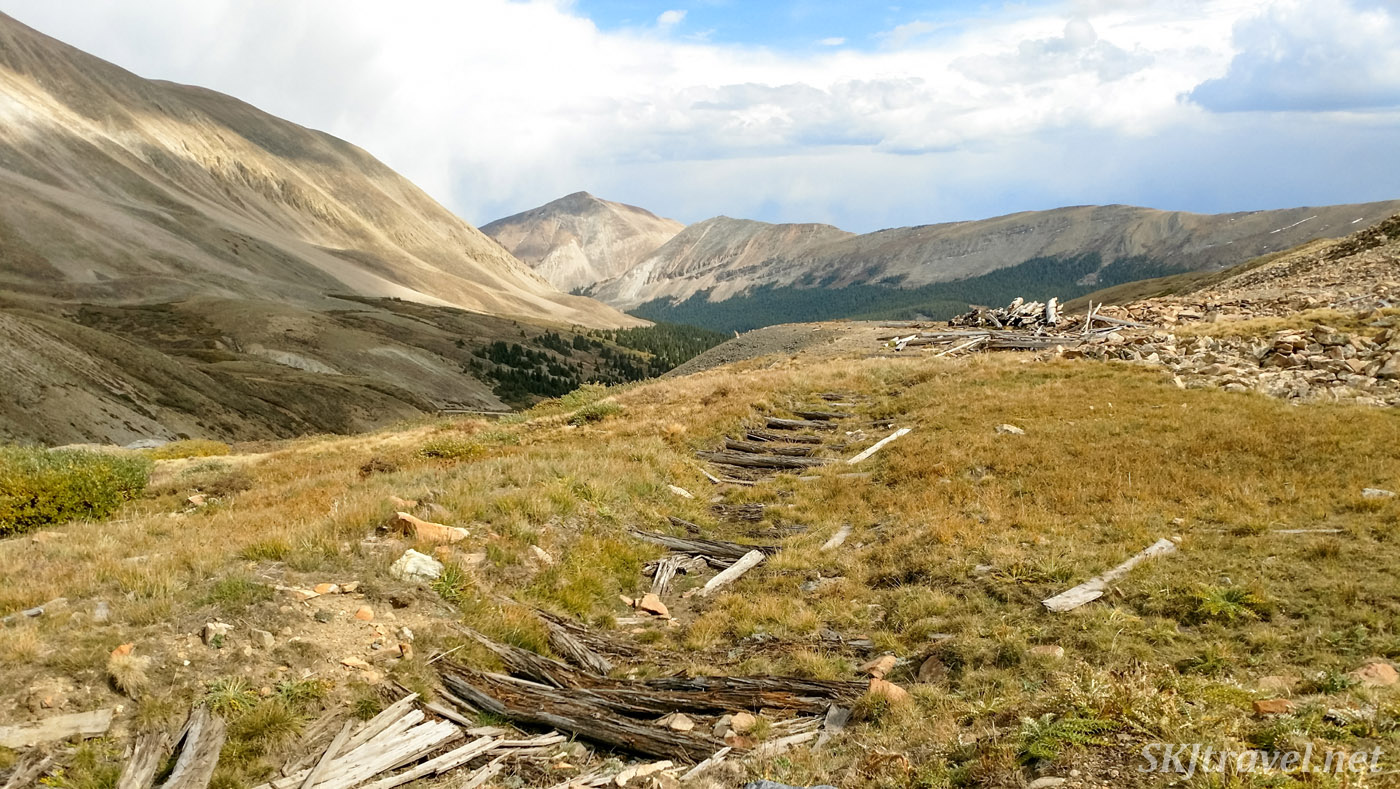 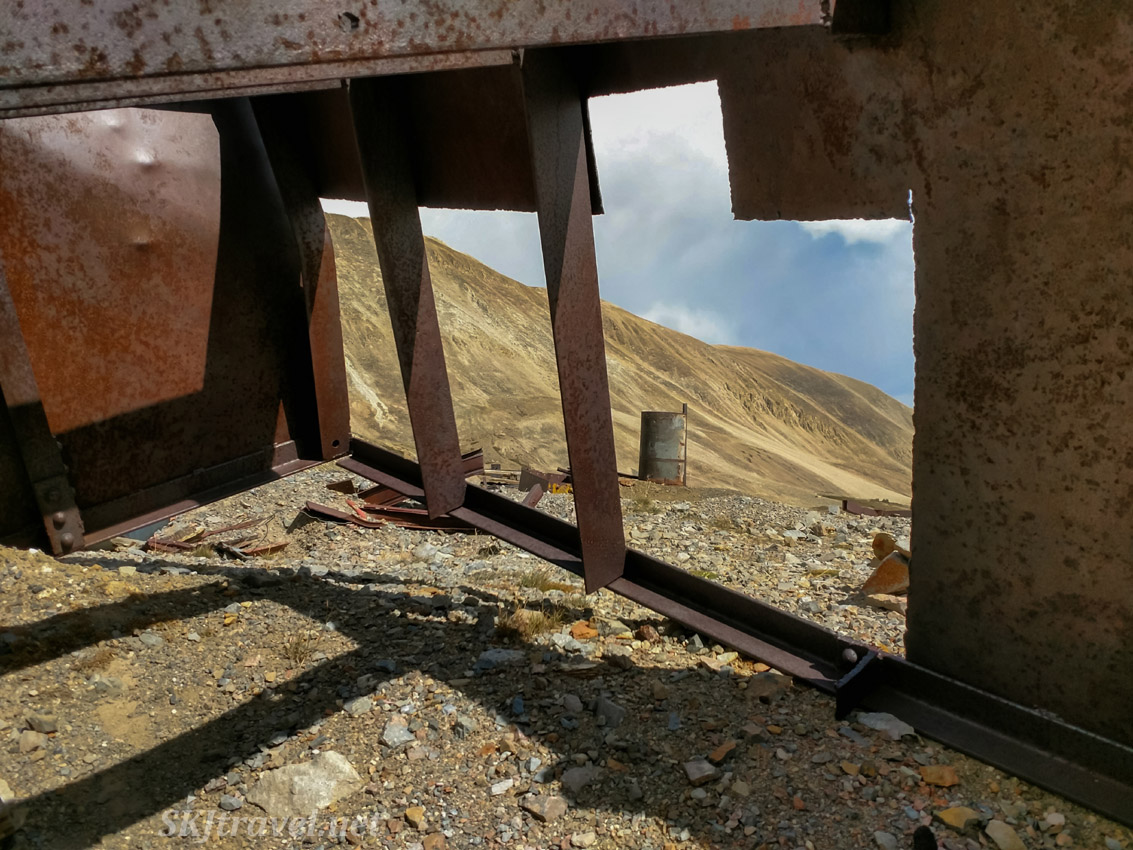 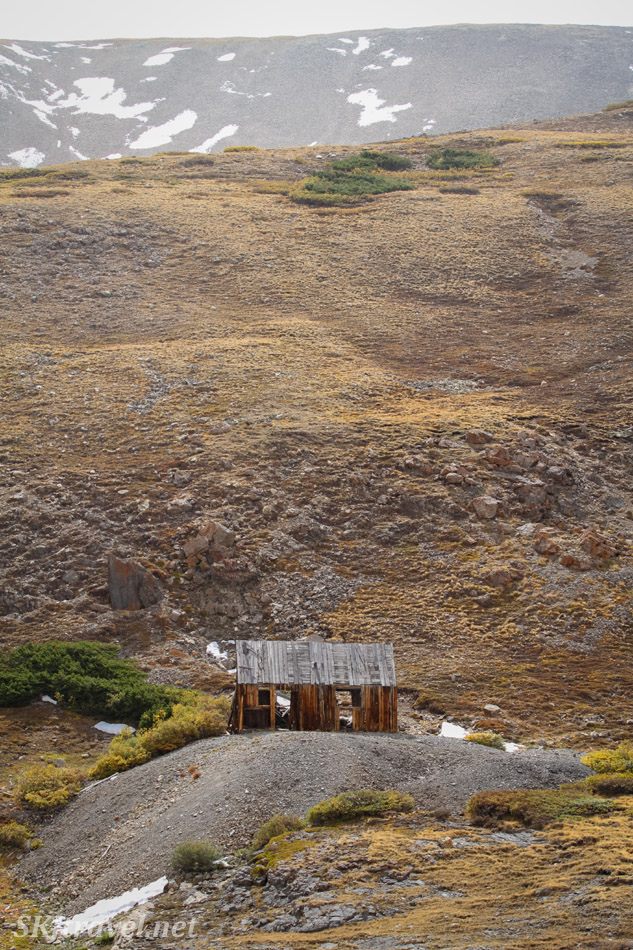 Various rusting machines and appliances -- the first one is a cookstove, probably resided in a bunk house during the heyday. 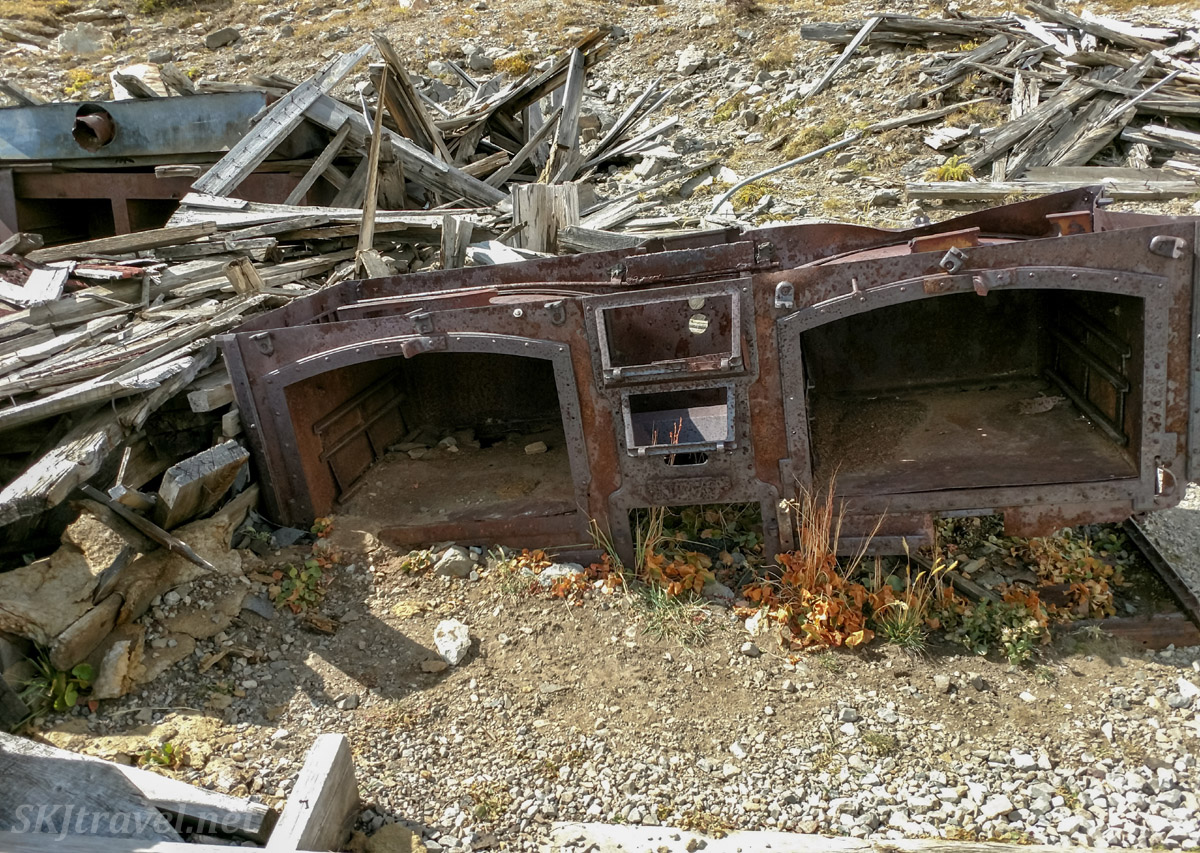 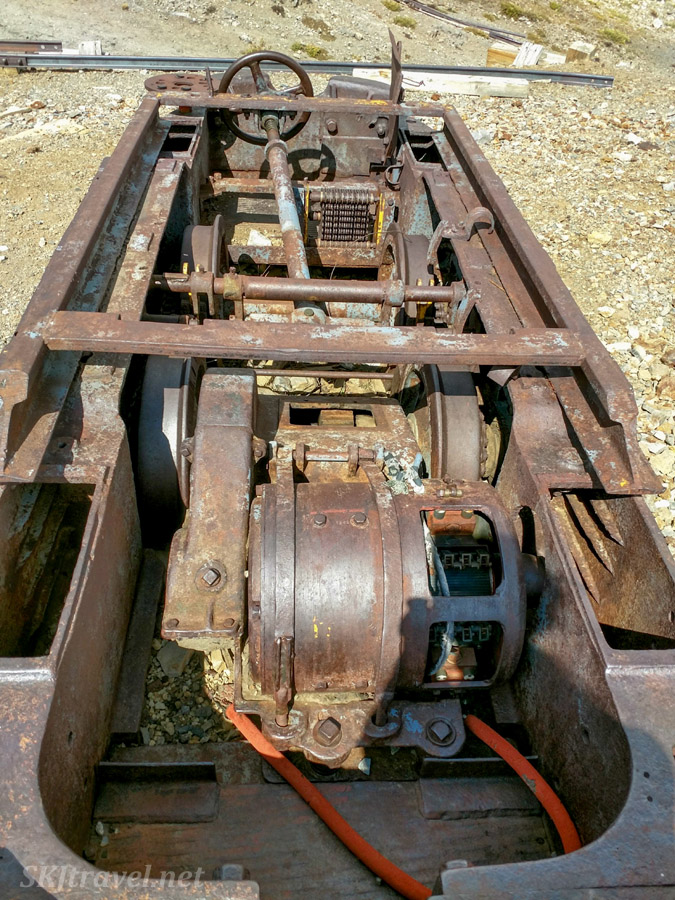 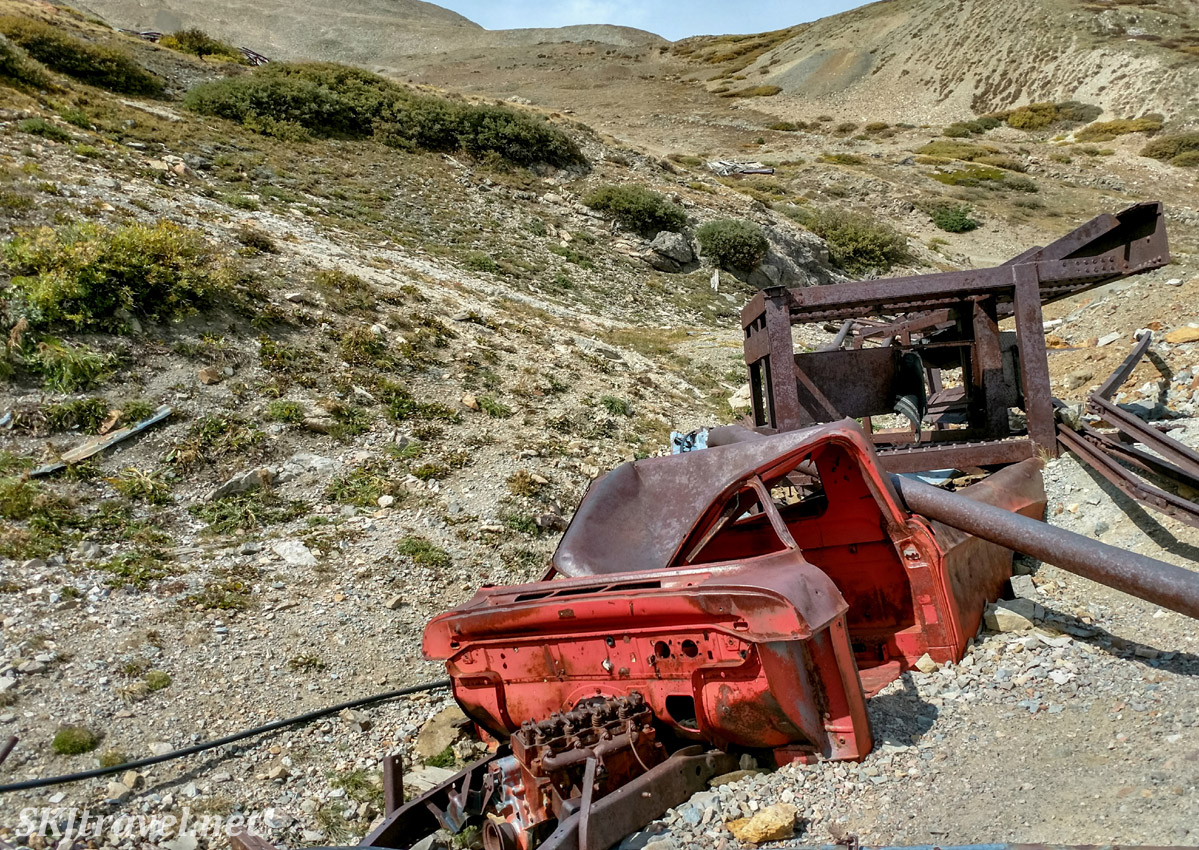 Nature always wins, though, even where there is little in the way of life at such high altitude and brutal climate. I thought these thorny plants were pretty but also looked vaguely sinister crawling over the rotting wood, looking almost like an octopus or something. 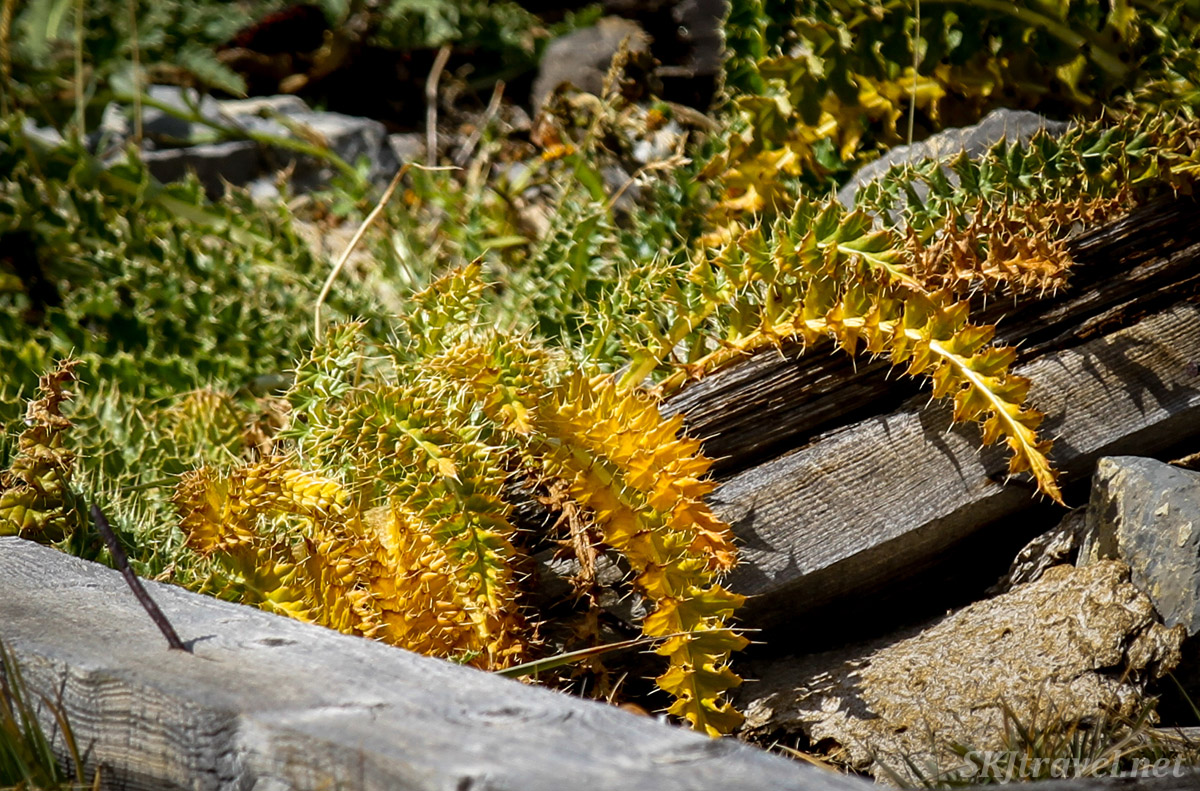 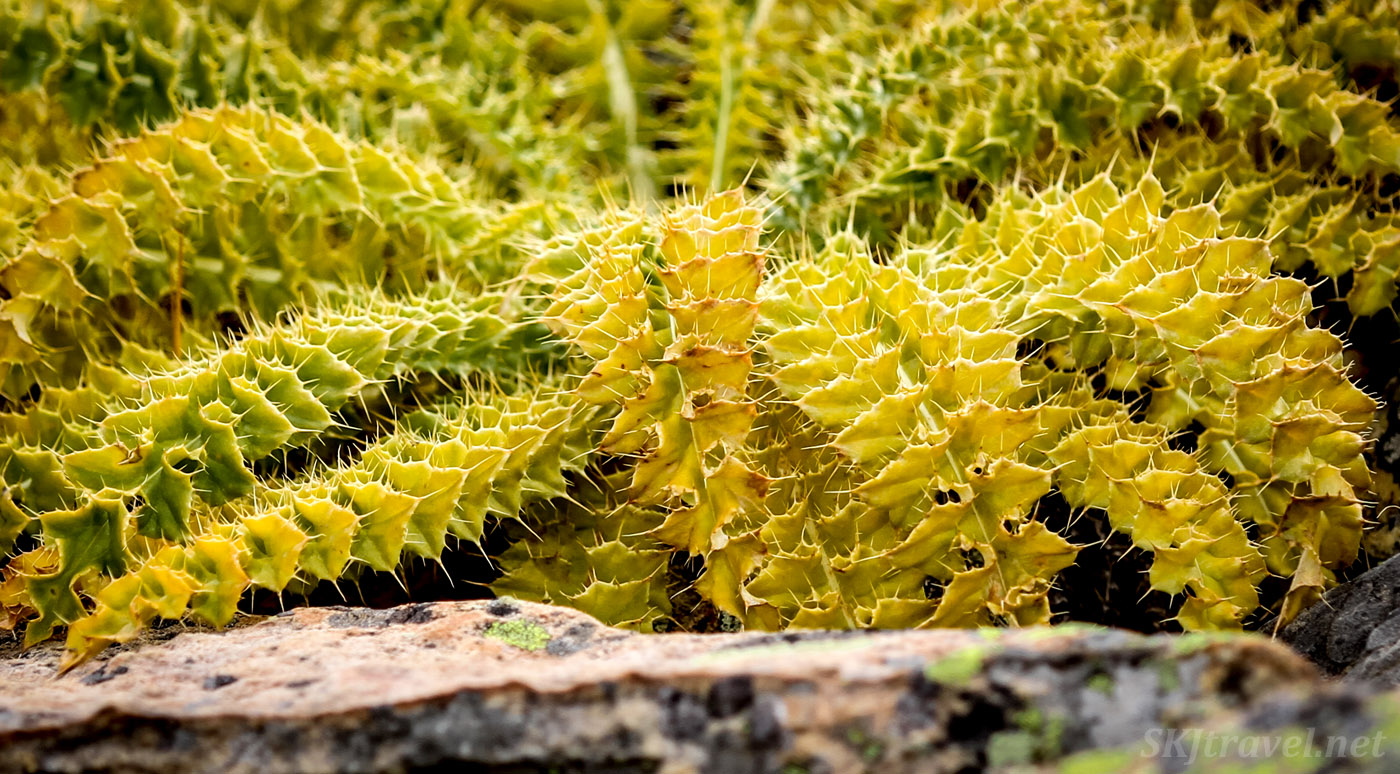 In the photo below, the track to the left took mine carts from the mine to an ore bin, which has been torn down, and the right track took the waste rock to be dumped over the end. This info was given to me by a guy whose dad worked in this mine and others around it. He also explained that the large iron thing between the tracks is what's left of a tram motor that pulled the mine cars in and out of the mine. 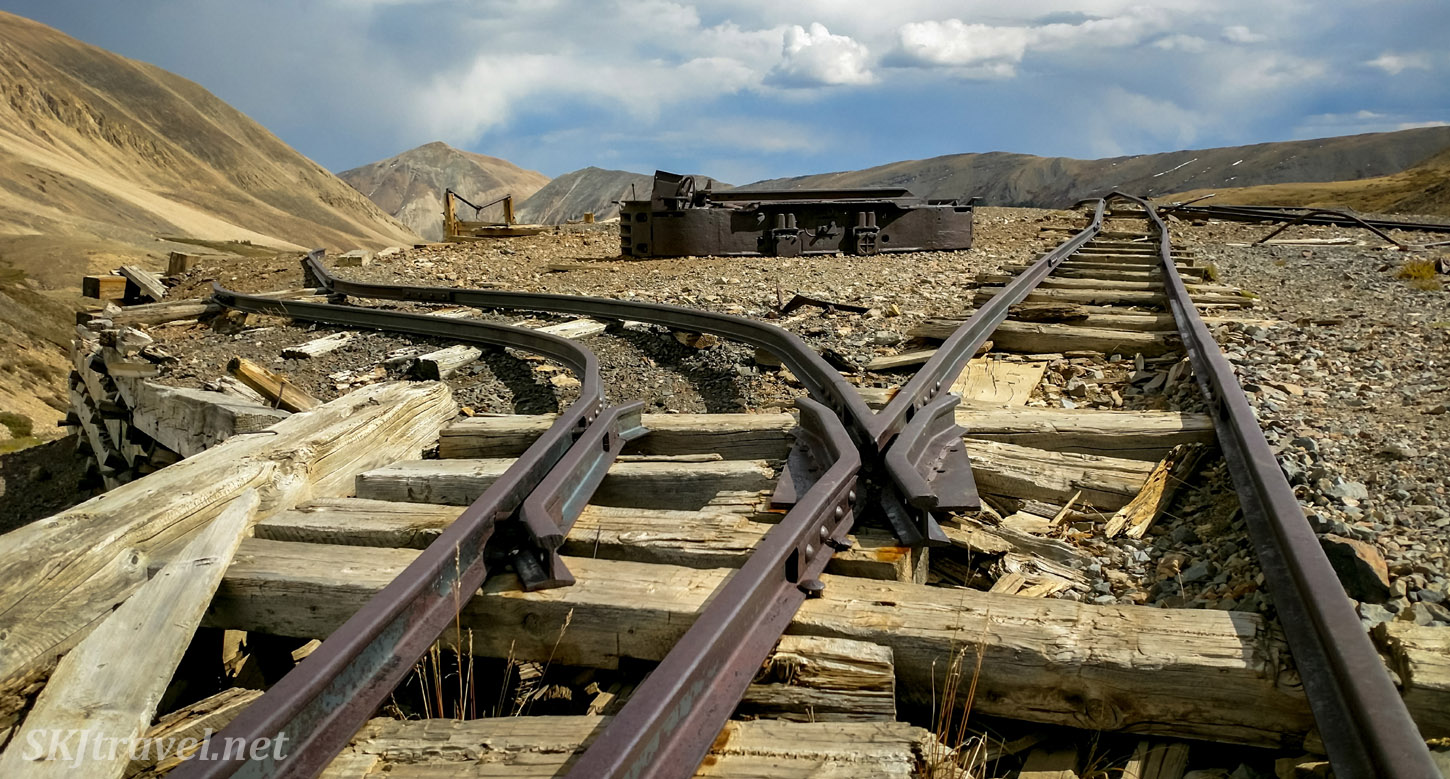 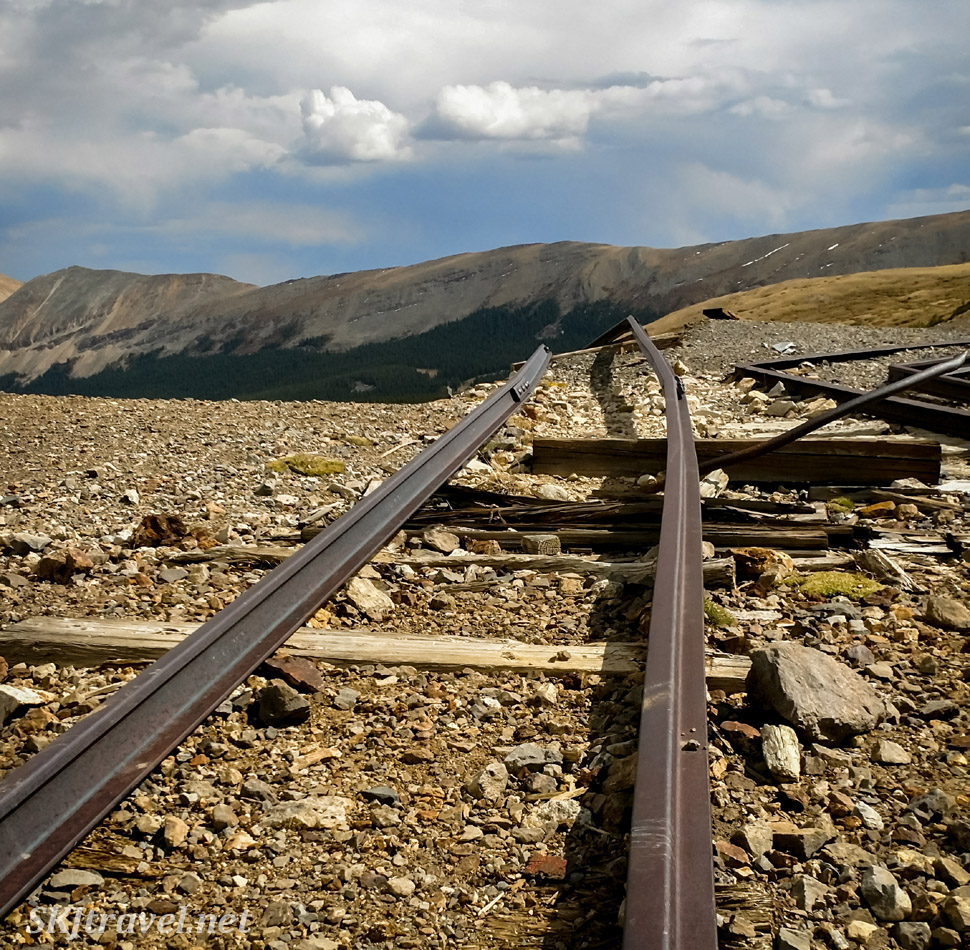 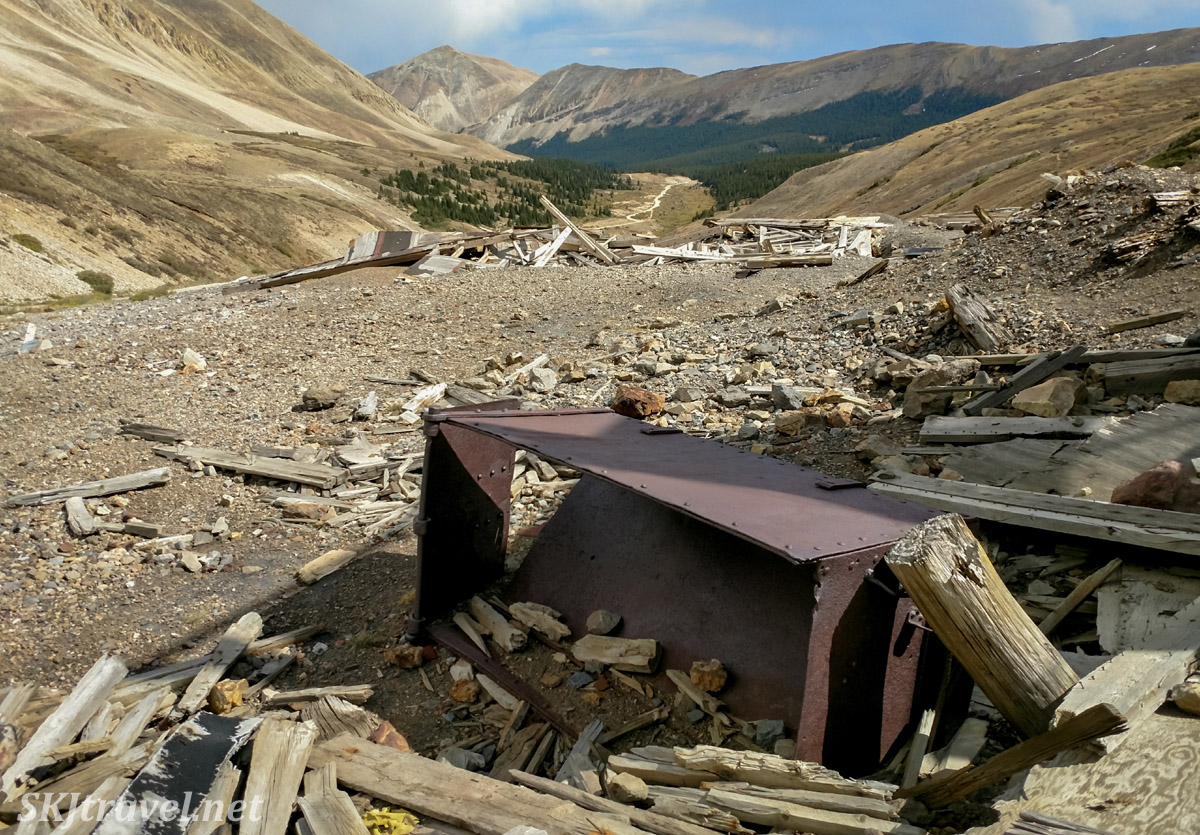 I thought it was neat to hear from someone who had actually witnessed the mine run. "I spent many days through the summers up there following my dad. A friend and I watched the compressor, and sometimes we went in the mine with the miners and watched."

Getting to see pikas was another great component of checking out this mine. I absolutely adore these tiny but incredibly hardy creatures who live typically above tree line in extremely harsh climates, building their dens in the crevices of rockfalls and skree. Look at how large their furry feet are relative to their body, their size and padded toes help them scamper all over the jumble of rocks they make their homes in. These tiny souls weigh in at about six ounces. You'll see them collecting lots of grass in their mouths and carrying it into the dens, but they don't hibernate, they're simply building up their winter food cache. I've just recently learned that they are an indicator species -- meaning that changes in their behavior, location and numbers can be particularly evaluative of the effects of climate change in the area. 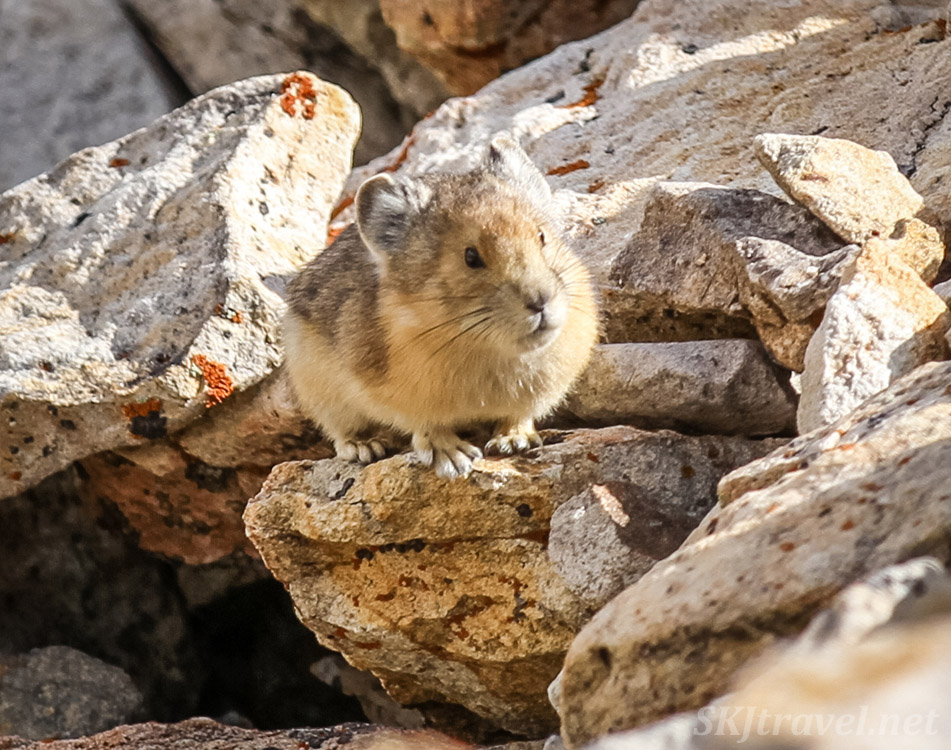 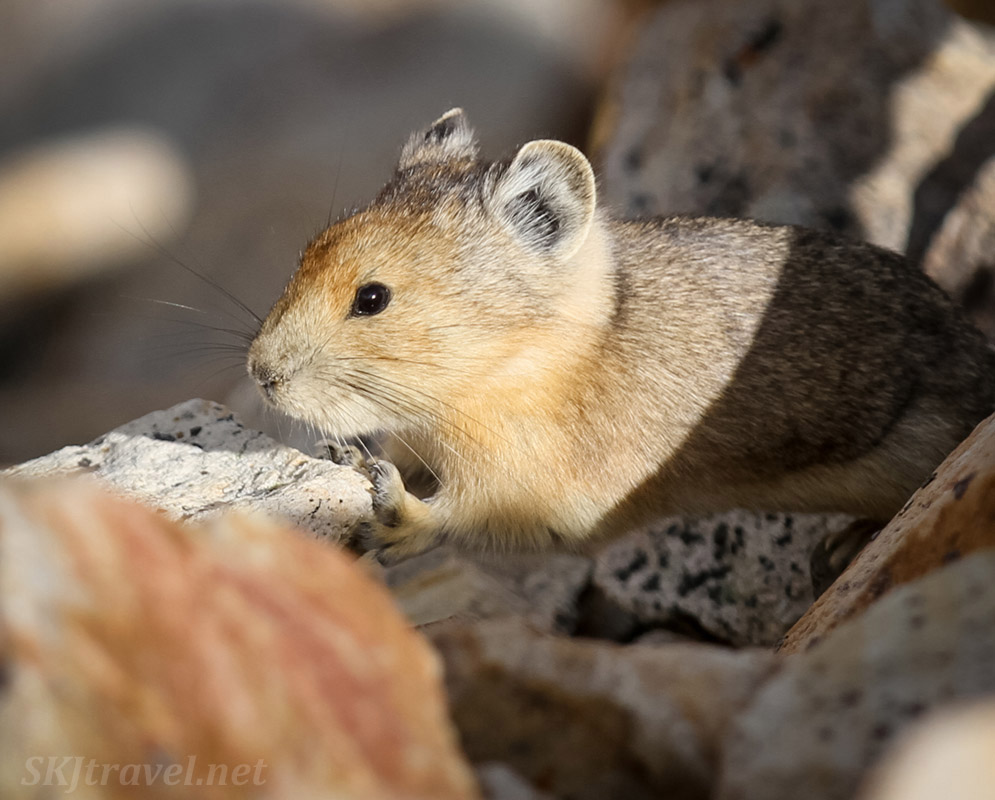 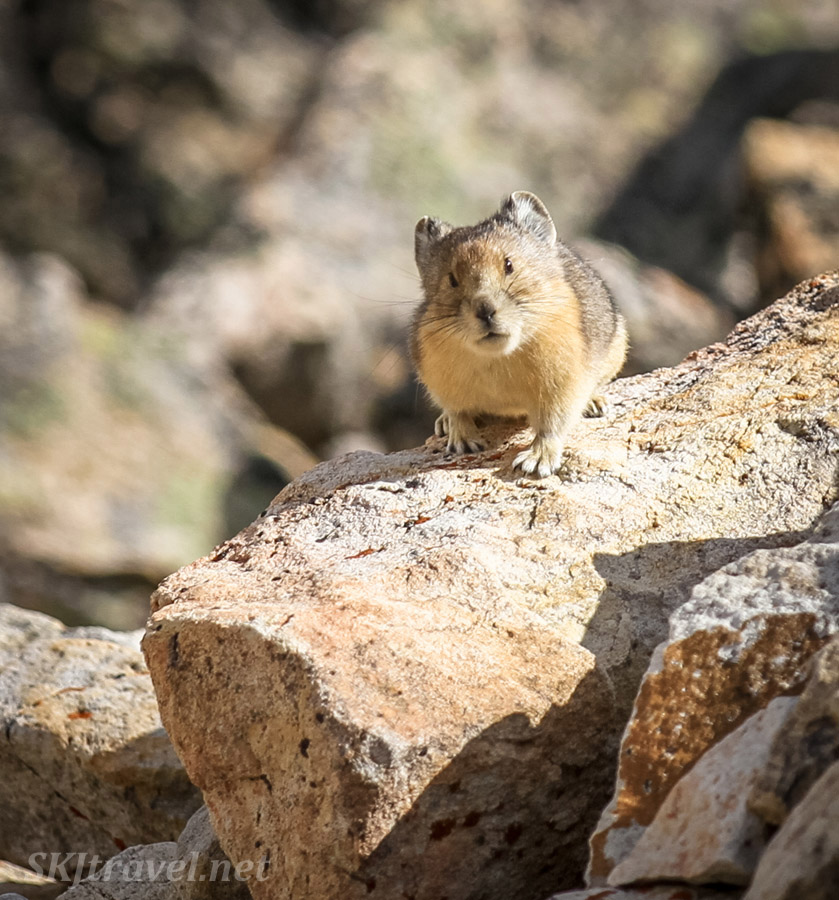 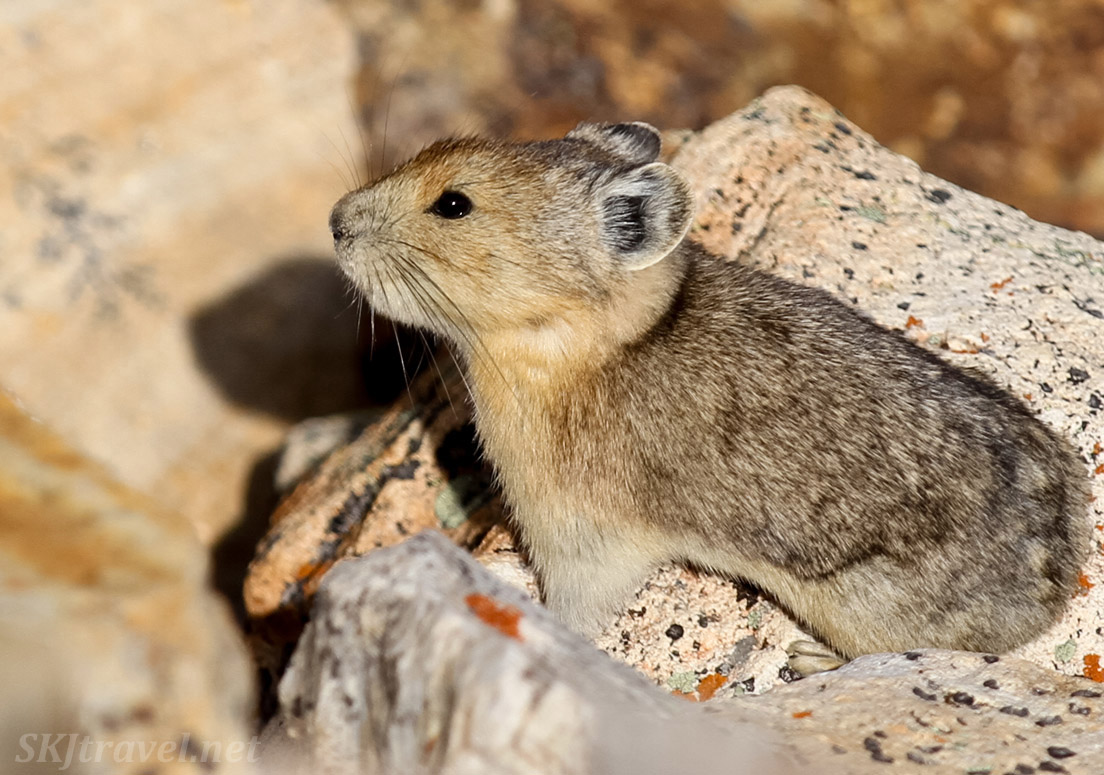 So the thing is, the first day I misremembered the map I was using via COTREX and didn't consult it once we started up Fourmile Road. So that day I actually thought we were at the Peerless Mine, which was where I had planned to go, when in fact we were at the Dauntless. I was confused when we reached a gate well before the mine, when the route information I'd read said we could drive right up to the mine. Well I figured out the next day, after looking at the maps, it was because we weren't at the Peerless Mine at all! Since I didn't know anything about the Dauntless or Hilltop mines -- they weren't mentioned on the website I was primarily using to plan our routes -- this is why we didn't know to hike up to the Hilltop Mine.

So a couple days later we decided to abort a route I had planned for us over Mosquito Pass, as we weren't super keen on the very narrow, rocky cliff-side shelf road, and decided instead to find the Peerless. The photo below is us driving the road to Peerless. Lop off about a third of the width of this road, put a whole bunch more rocks in it and add another couple thousand feet to the drop-off at a steeper angle to get a sense of what we aborted. 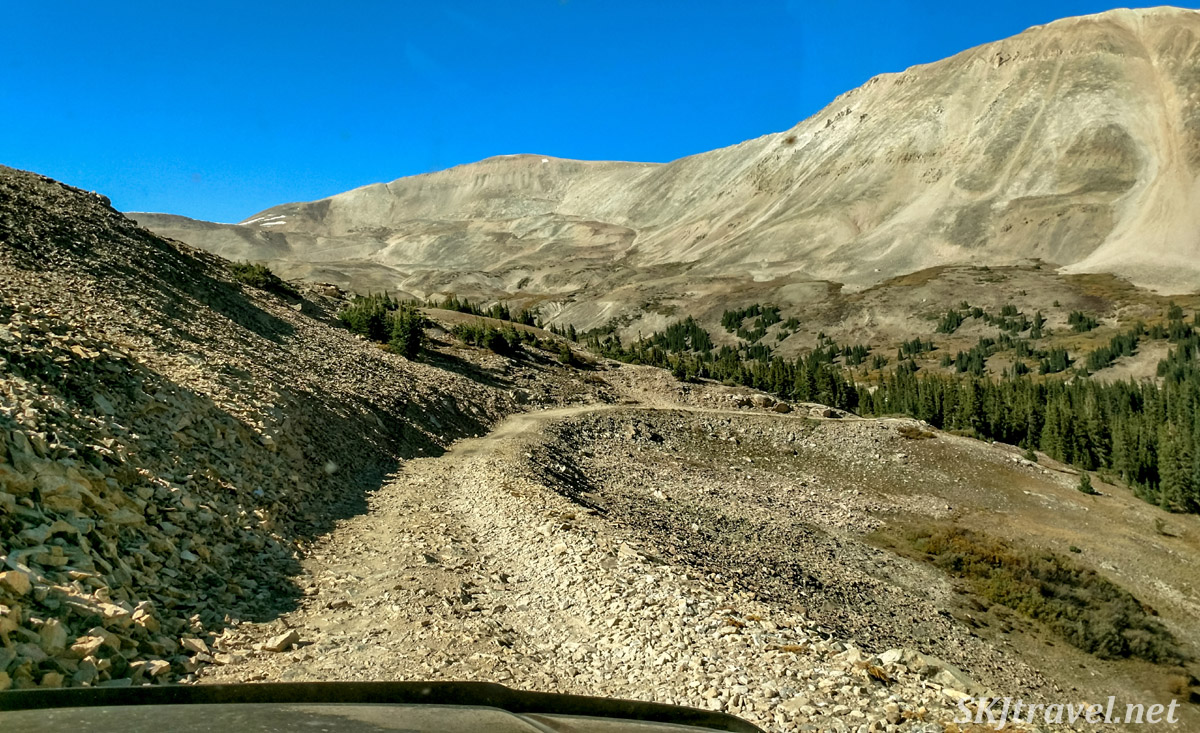 Heading toward "peerless" on the map wasn't very difficult, as there was only one road that branched off of Fourmile in that direction toward a mountain of that name. However, finding the actual mine is not what we thought, and we likely never found the main entrance. But I didn't know this until I got all the way home and "met" (online) the fellow whose dad worked there. I was expecting some ruins along the lines of the Dauntless with lots of artifacts and buildings, but the only thing we found was the entrance to what we presumed was the Peerless Mine. But according to the miner's son, this in fact is called the Twinkle Mine, of which he says: "My dad and a few other men leased the claim in about 1957 and tunneled in to a small stope they mined out. Don't think it paid the bills." [If you're wondering, "stope:" Stoping is the process of extracting the desired ore or other mineral from an underground mine, leaving behind an open space known as a stope."] 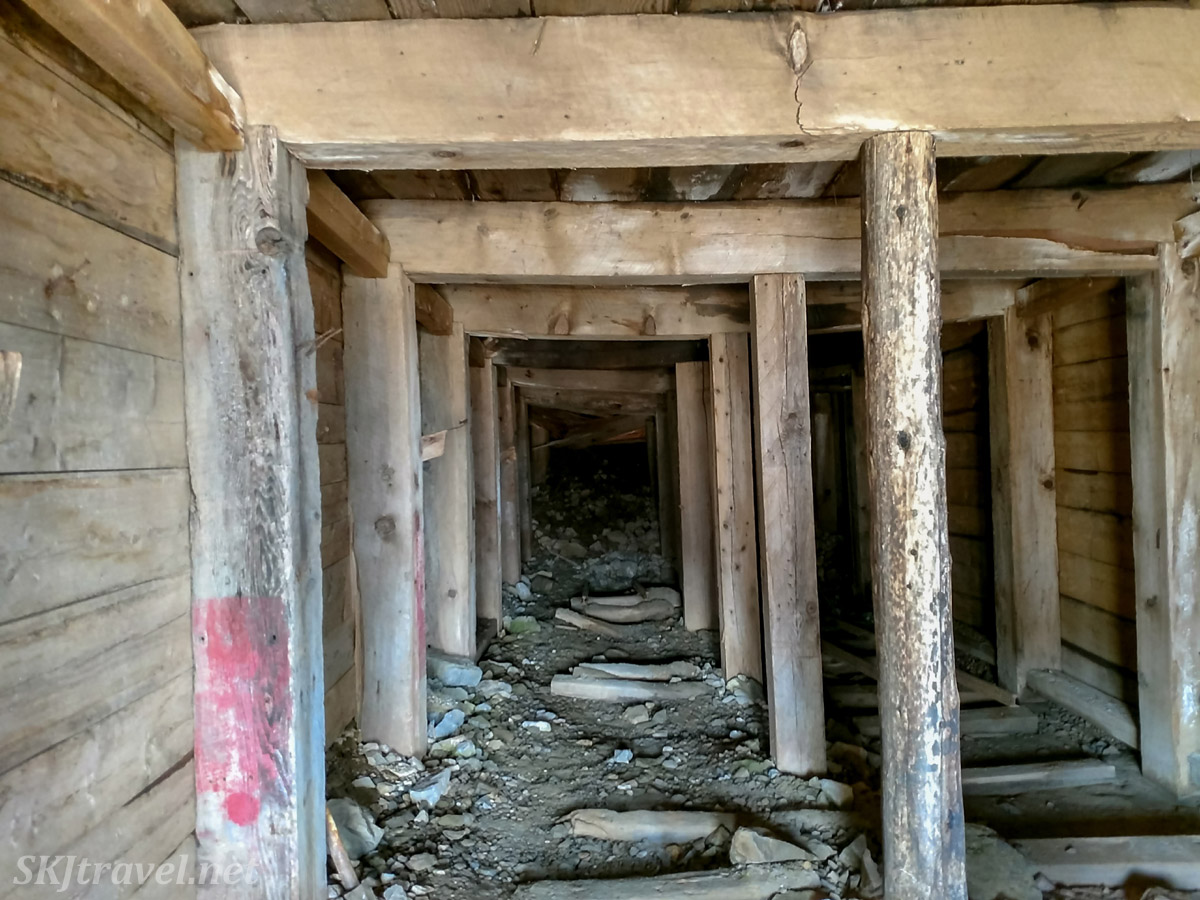 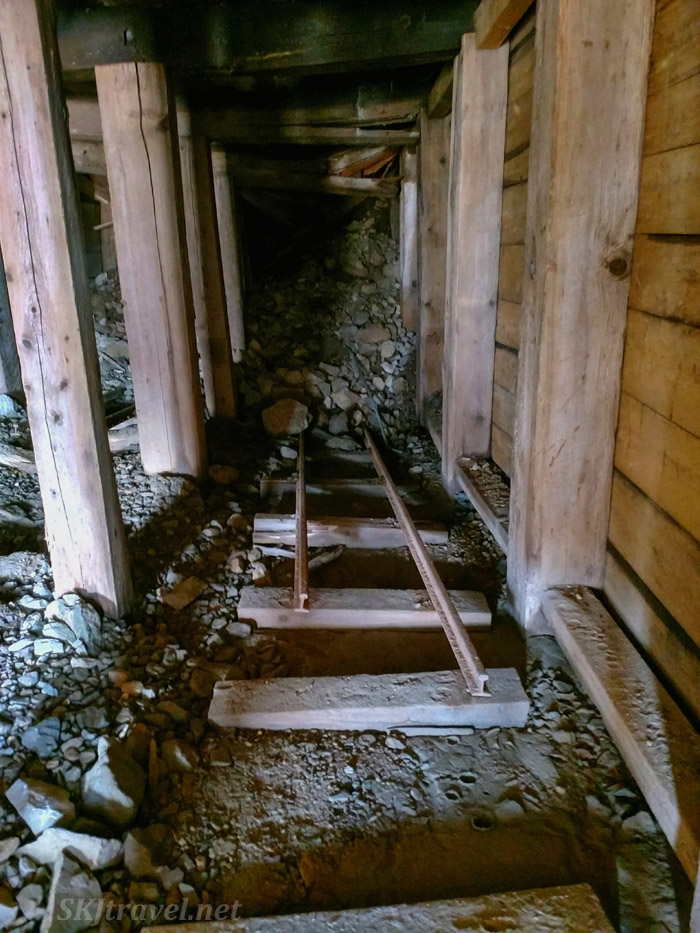 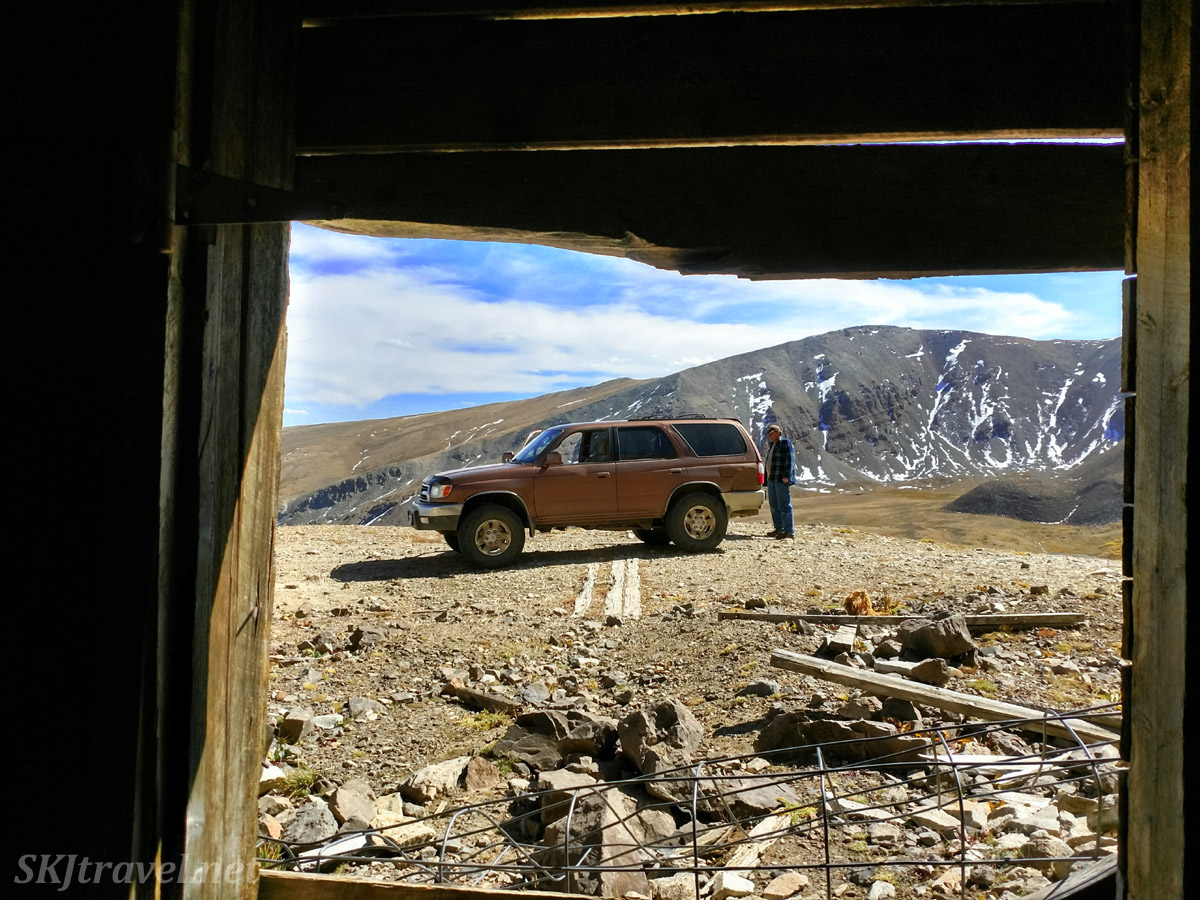 So where was the Peerless? As far as I can tell, we probably never even saw the main entrance. It's apparently near the saddle we drove up to where the driving trail ends. The little patch of snow just behind Chewie in the pic below has a shaft beside it down into the mountainside with a grate over it. 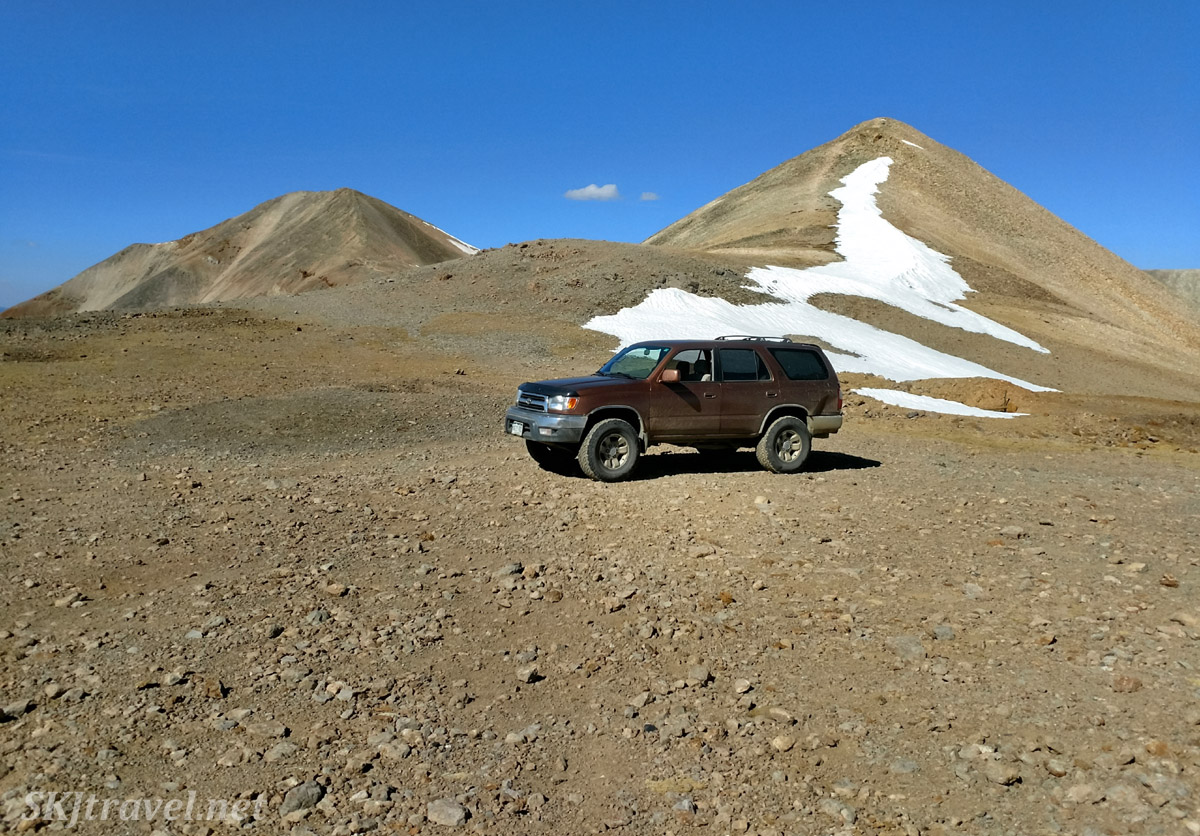 I asked if that was it, and he said possibly part of it but he thought the main entrance was below it. Anyway, the point being there were no buildings remaining, perhaps some splinters of wood we couldn't see from where we were.

So Peerless Mine itself was a bit of a bust, but the pursuit of it and the view at road's end is certainly fairly peerless. Absolutely amazing views on either side of the saddle (I didn't have a camera that could do it justice) -- one view down into the South Park basin and the other view down into the Leadville area. I realized the two are not really so far apart as they seem driving by road. A crow can get between them in no time! Assuming he's flying the same direction as the wind ... he wouldn't go much of anywhere trying to fly against it. It was quite calm on the mountainside but up on the saddle it was so windy I couldn't even hold my phone to take a picture with one hand, had to use both hands to keep it steady. The miner's son said of it, "They called it Gobblers Knob, said it was the only place they knew in the winter you could spit down wind and have it hit you behind the ear five seconds later. It was brutal. They parked at Leavick and pulled a sled with a little D4 Caterpillar dozer all the way to the Twinkle. They were glad to get underground, out of the wind to work." 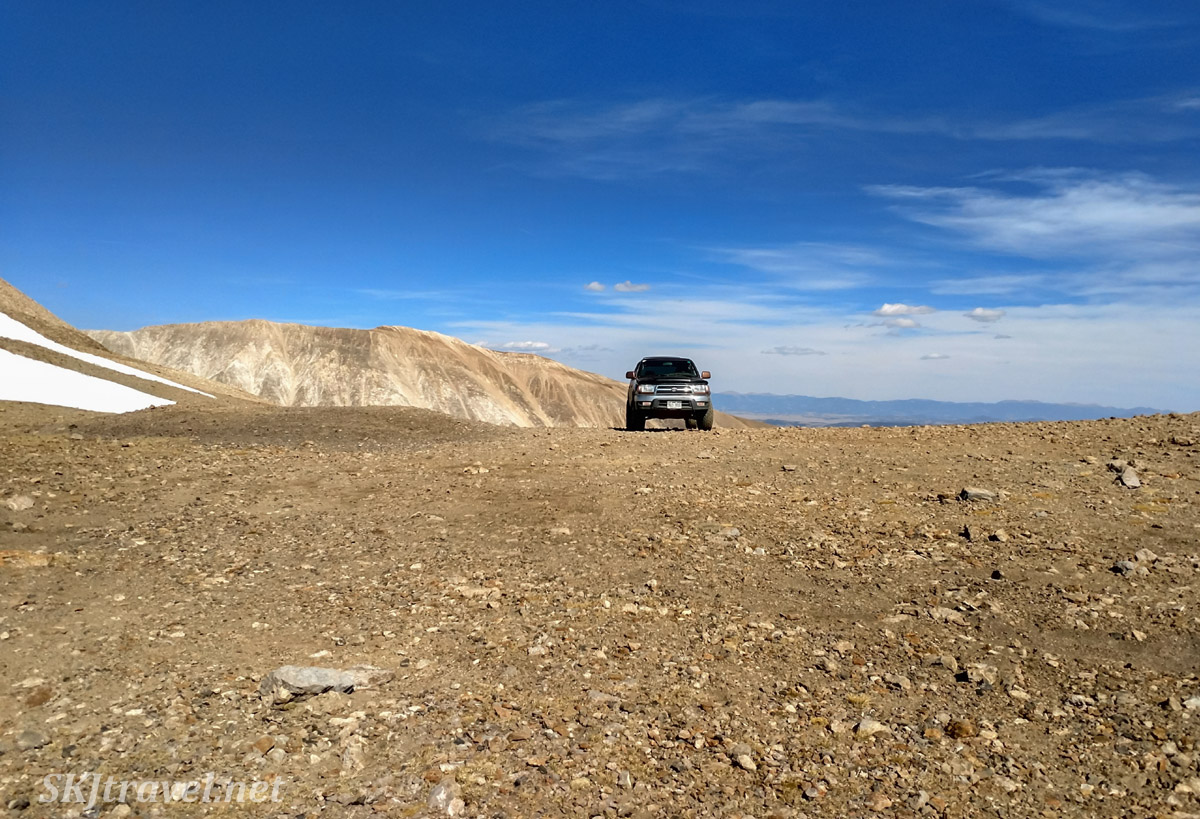 Although sometimes 4x4ing it's super handy, even crucial, to run across another vehicle on the trail, I absolutely love it when we are all alone, which we were most of the time exploring this area. On this day we came down from the saddle to have a late lunch sitting on the tundra beside the trail. Neither of us was talking. I was privately thinking to myself that it's too bad I have to chew my food because even just the sound of my jaws mashing a soft burrito shell and pepperoni was extremely distracting to such deep silence, I wished I could just drink it in. Back in the car on the way down, Erik made the exact same comment, how when he stopped chewing his sandwich the silence was almost profound, the chewing was a distraction. When two people have such a completely random thought that chewing food is too much of a trespass, you know that's some divine silence. 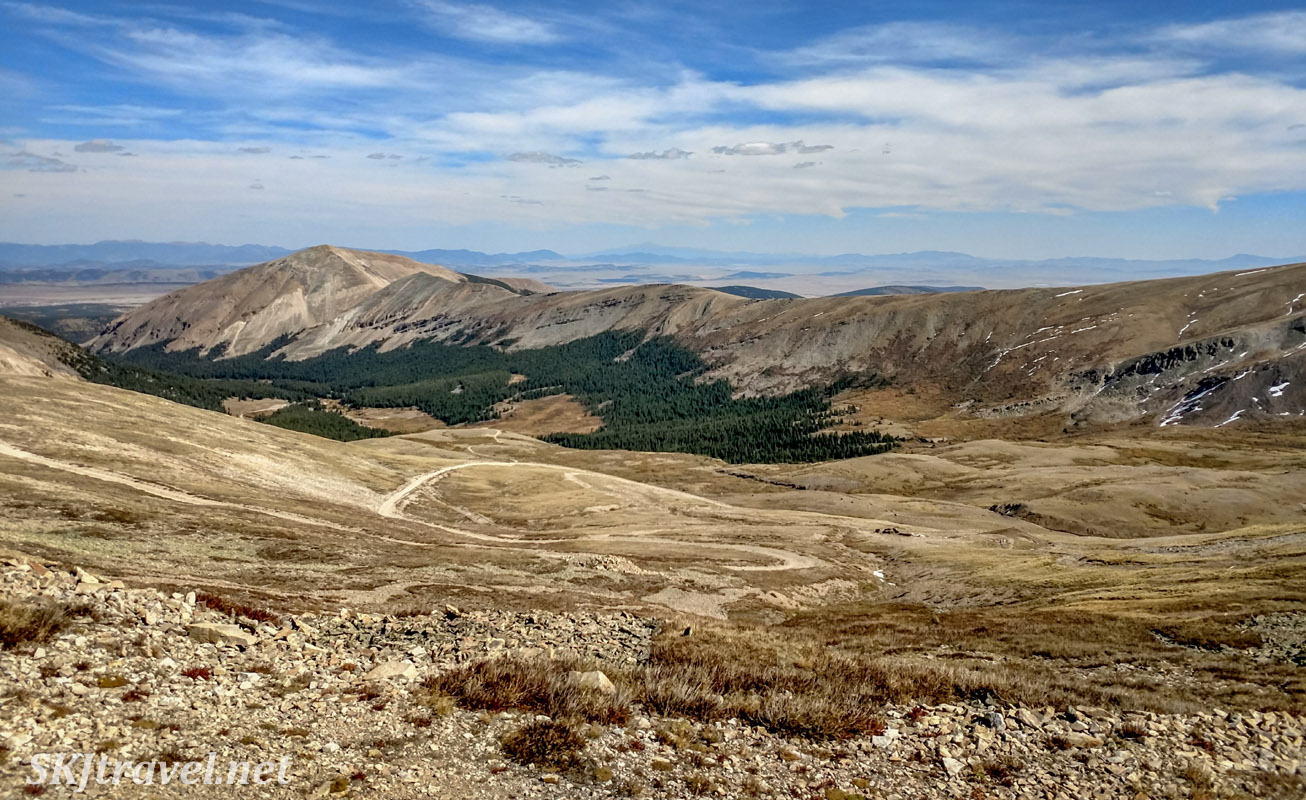 Thanks to Herk Almgren for the firsthand info and personal memories.