So, I consistently read from numerous sources -- travel blogs, travel guides, friends who had been there, etc. -- that Essaouira was a lovely seaside town to visit and that the blue boats were a notable feature. And I'd seen plenty of photos of said boats, but to be perfectly honest, I never found any of the photos particularly captivating, technically or artistically proficient as they might be. Nice, sure, but the pics alone weren't drawing me in. But being based in Marrakech for a few days, it seemed like a sensible place to go to see the sea from, a straight shot west, and everyone else's excitement over the place intrigued me.

The drive out was nice to see some scenery outside the city, a variety of landscapes. We were particularly entertained by a section of road where all the trees seemed to have goats in them. Erik said, "They have some mighty strange birds here in Morocco!" I don't know how goats climb trees. I half suspect the shepherds put them up there in the middle of the night for the benefit of the tourists driving by. They've probably got a cherry picker stashed away somewhere, somehow invisible on the flat, barren landscape, that they use to place and remove the goats. (haha) And of course we liked seeing camels along the road. Reminded us of Tunisia. Here's a pic with both tree goats and camels! 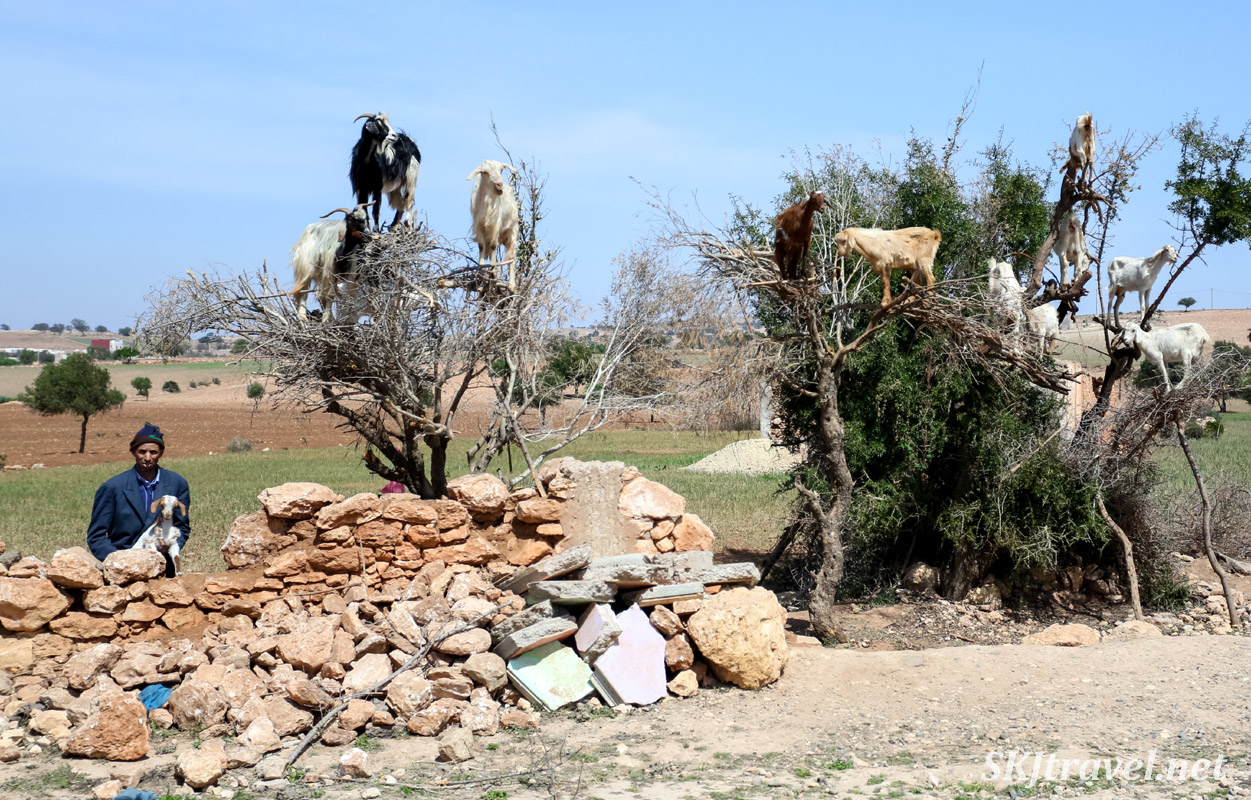 Nearer to the outskirts of Marrakech, a number of terra cotta and pottery stores, lamp stores and other large displays of goods.

So we got to the town in the afternoon and were pretty peckish, so the first thing we did upon entering the old town medina was look for some grub. We were passing by this place, I stopped to take a picture of the kitty, and a man came out of a restaurant across the way beckoning us inside. We trundled over and peeked at the menu, looked good enough to our hungry tummies, so in we went, figuring it was probably an overpriced tourist-trap kind of place, but oh well, we didn't feel like searching around, we only had a few hours to spend in town before we needed to head back home if we wanted to get back by dark. 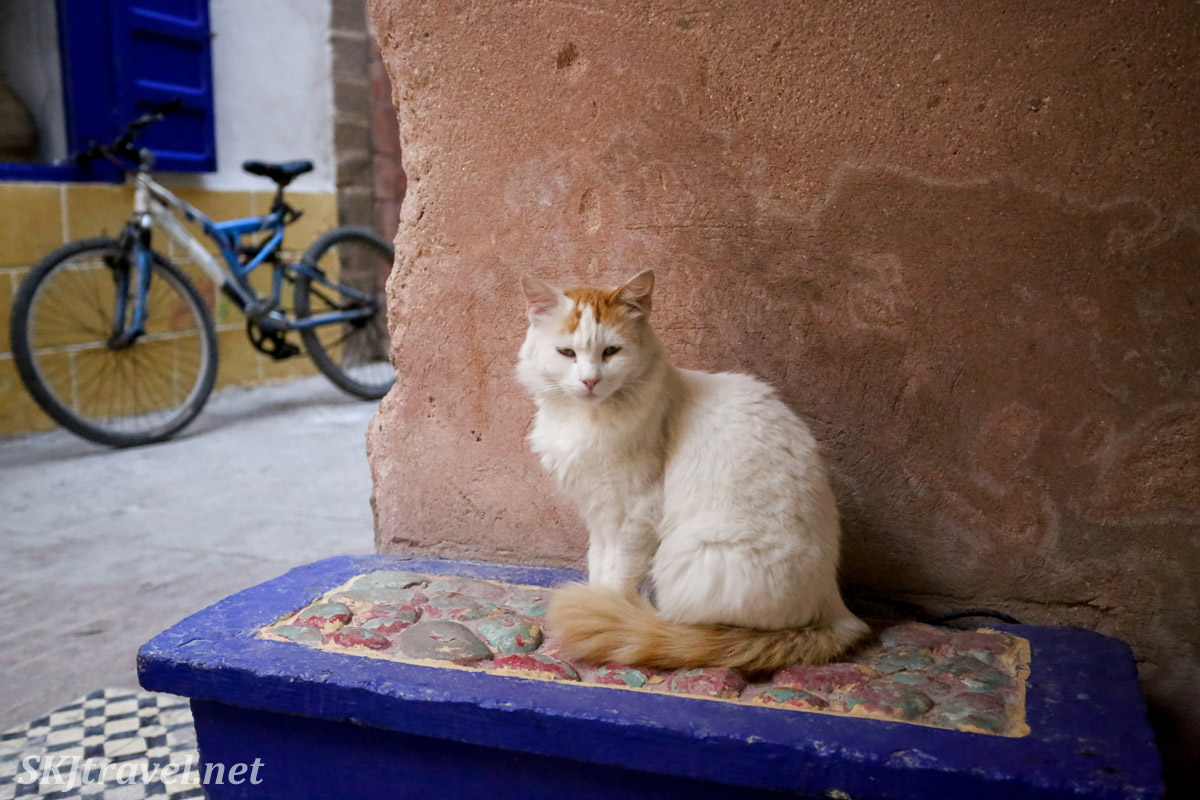 They offered us beer (another indicator of a tourist restaurant), and we happily ordered a local brand. Ordered food, which turned out to be Grade A delicious. Maybe our best-tasting meal. The room was kind of like a cavern. There was only one other table of patrons, speaking a range of European languages, including English. In the corner of the restaurant was a three-stringed guitar-esque instrument: a traditional Moroccan instrument called a sintir, and a set of castanets. One of the Europeans was interested in the sintir and this eventually led to two of the waiters playing the sintir and the castanets, which was really cool. And then an old man sitting in the corner, the guy who had beckoned us into the restaurant, got up and started dancing. There was no one else in the place, it wasn't a contrived scene for tourists, just the people having fun. Some of the Europeans tried playing the instruments, too. We just sat back and enjoyed the merriment and food. 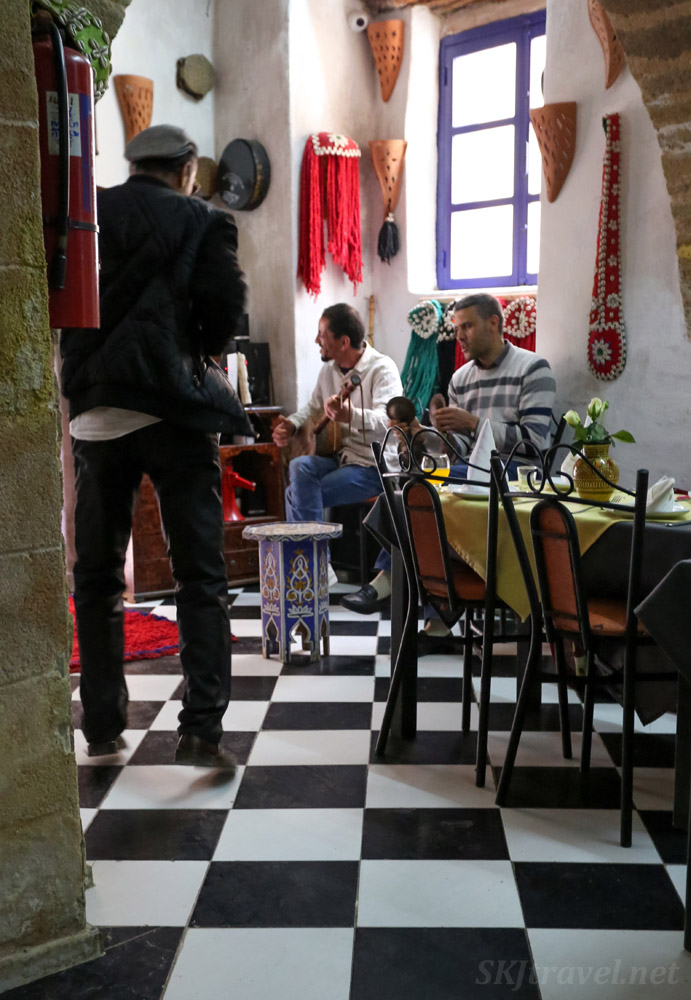 We didn't have tons of time to explore the old town, so we stuck to the main thoroughfares which were lined with only souvenir stalls. But it was still pretty and much more organized than the medina areas we had explored in Marrakech. And scooters were not racing past every 10 seconds, which started to get on our nerves in Marrakech's medina in the super narrow streets. 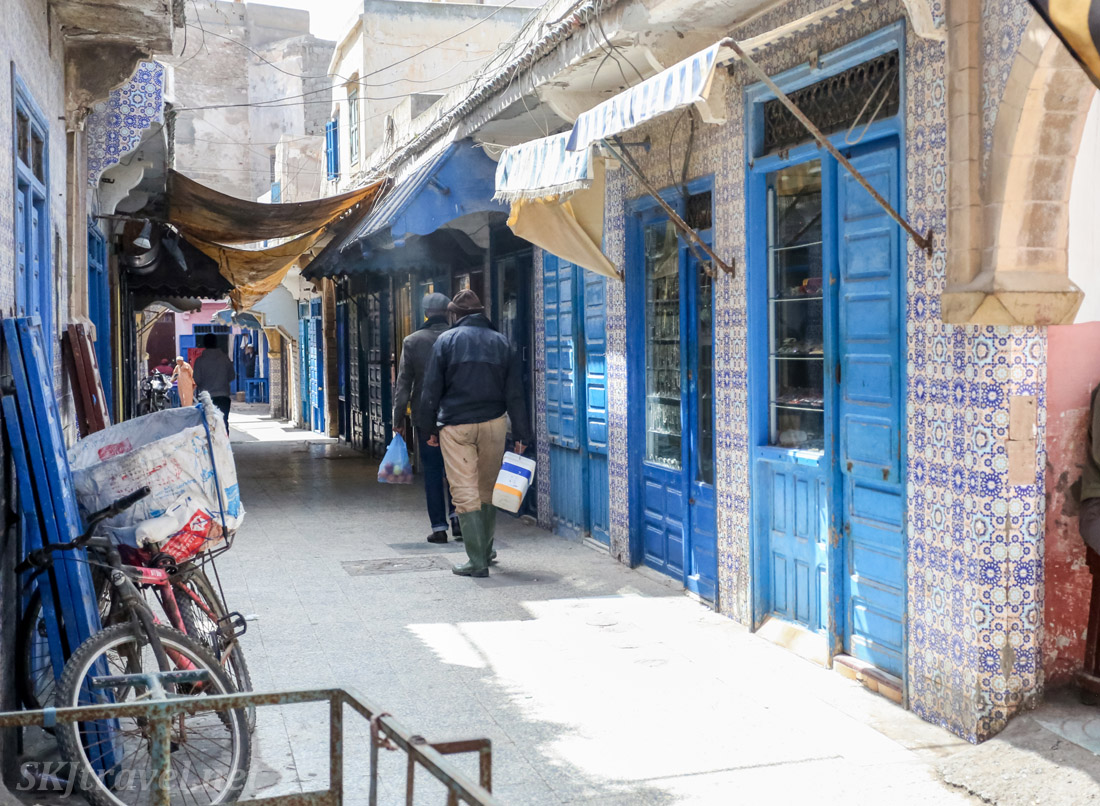 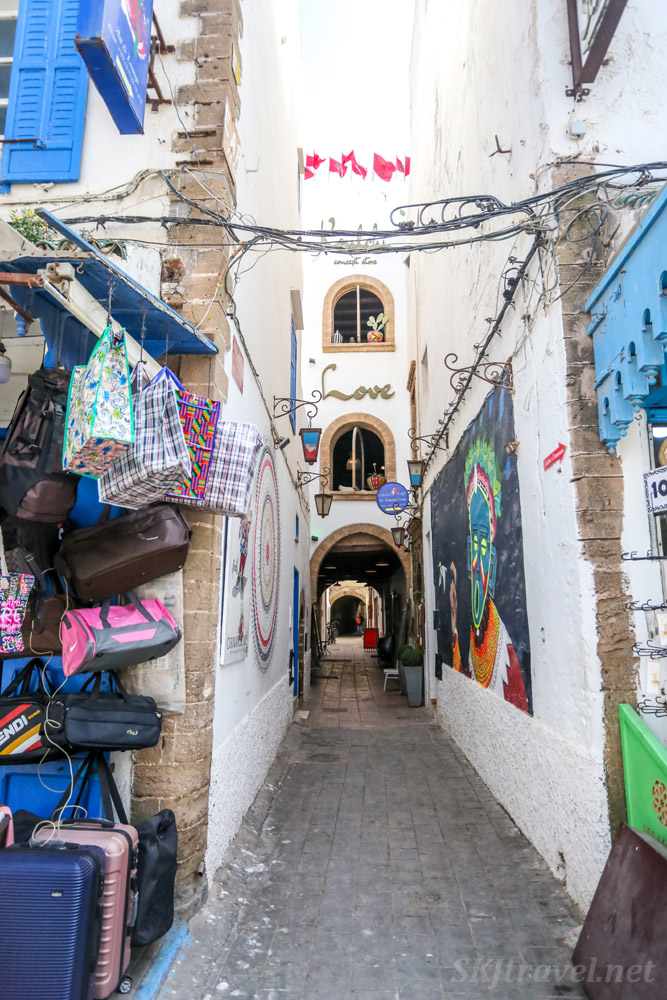 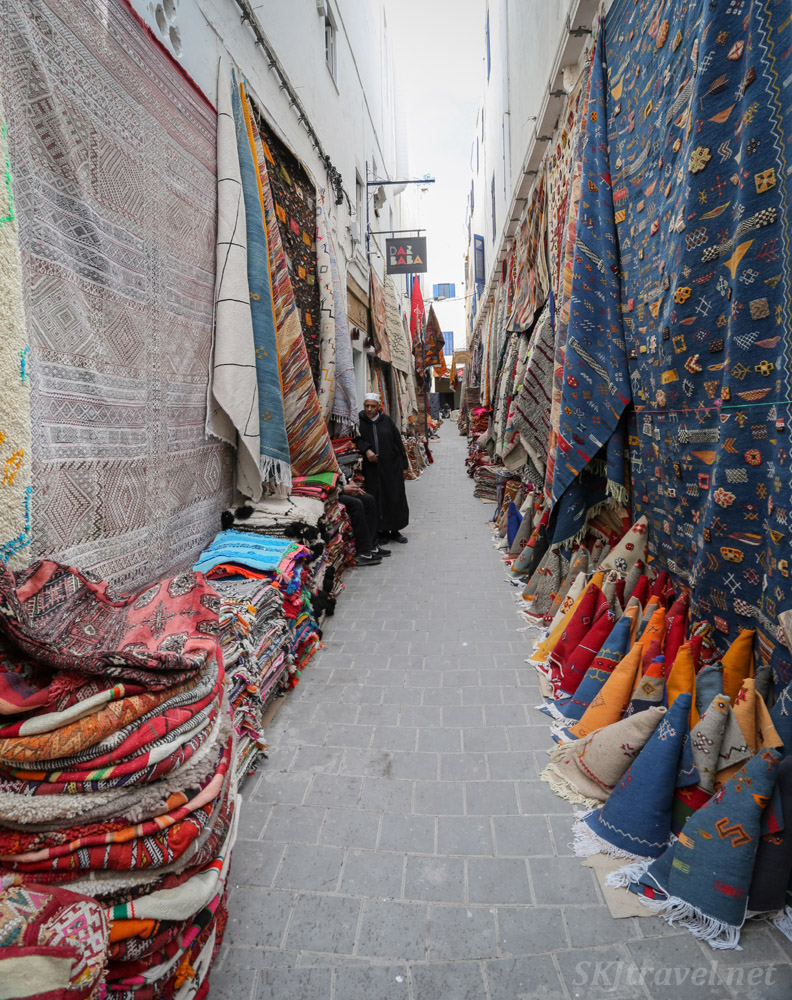 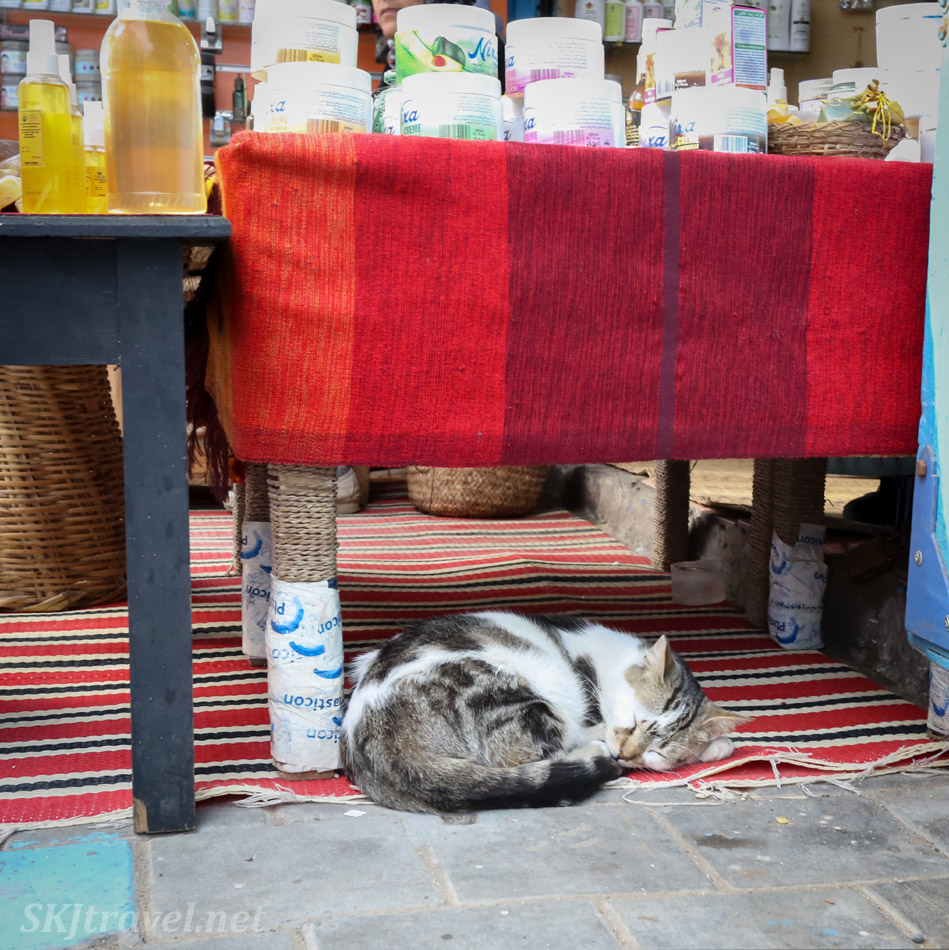 So when we were in Tunisia, we visited a number of Star Wars filming locations (also in Guatemala). I read somewhere that Lucas's inspiration for the Tuskan Raiders came from the Bedouin (nomadic tribes in North Africa), so there's absolutely no way it's a coincidence that the Jawas wear the same cloak as these guys, whom we saw a lot of in Essaouira. 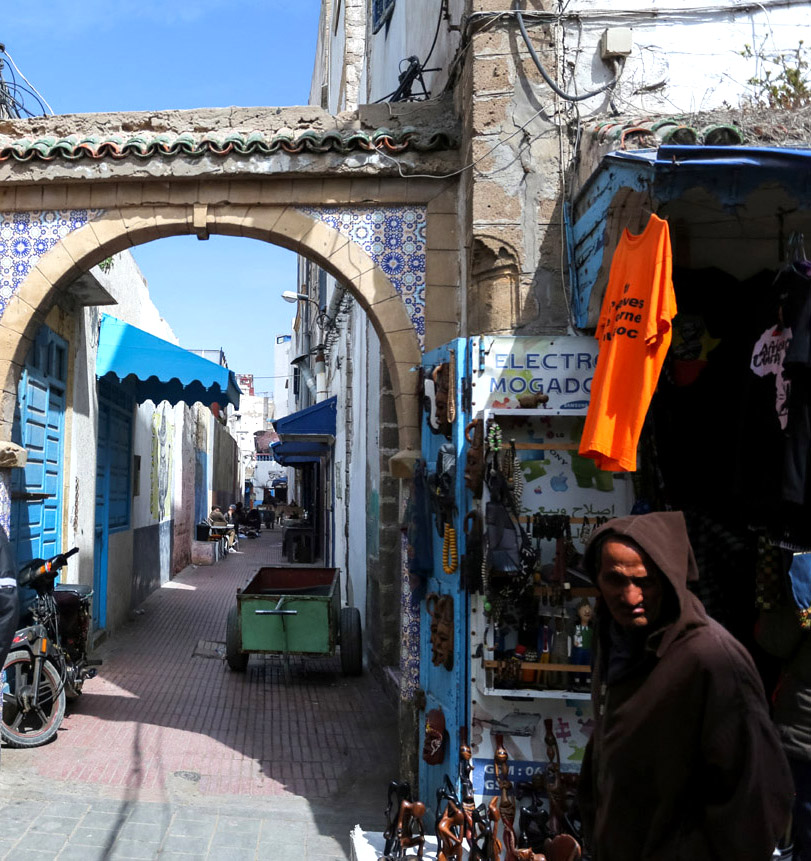 Essaouira was a filming location for Game of Thrones. In 2015 we were in Girona, Spain, which was another filming location, and we were also at one of the locations in Iceland, though before those scenes were part of the show. Essaouira was the setting for the scenes in Astapor. If we had gotten to finish our itinerary (hopefully in the future) we would have visited other GOT locations, too. I'm a fan of the show, but not one of those know-everything-there-is-to-know-behind-the-scenes fans, so outside of knowing Iceland was a prominent filming location, I have learned about others by happenstance as I am visiting them myself. I think it's rather interesting to see what real-life places capture the imagination of filmmakers.

But foremost on my mind was finding the seashore and blue boats. So we easily found the promenade out to the shore. Lined with sea birds and a nice look back to the city. 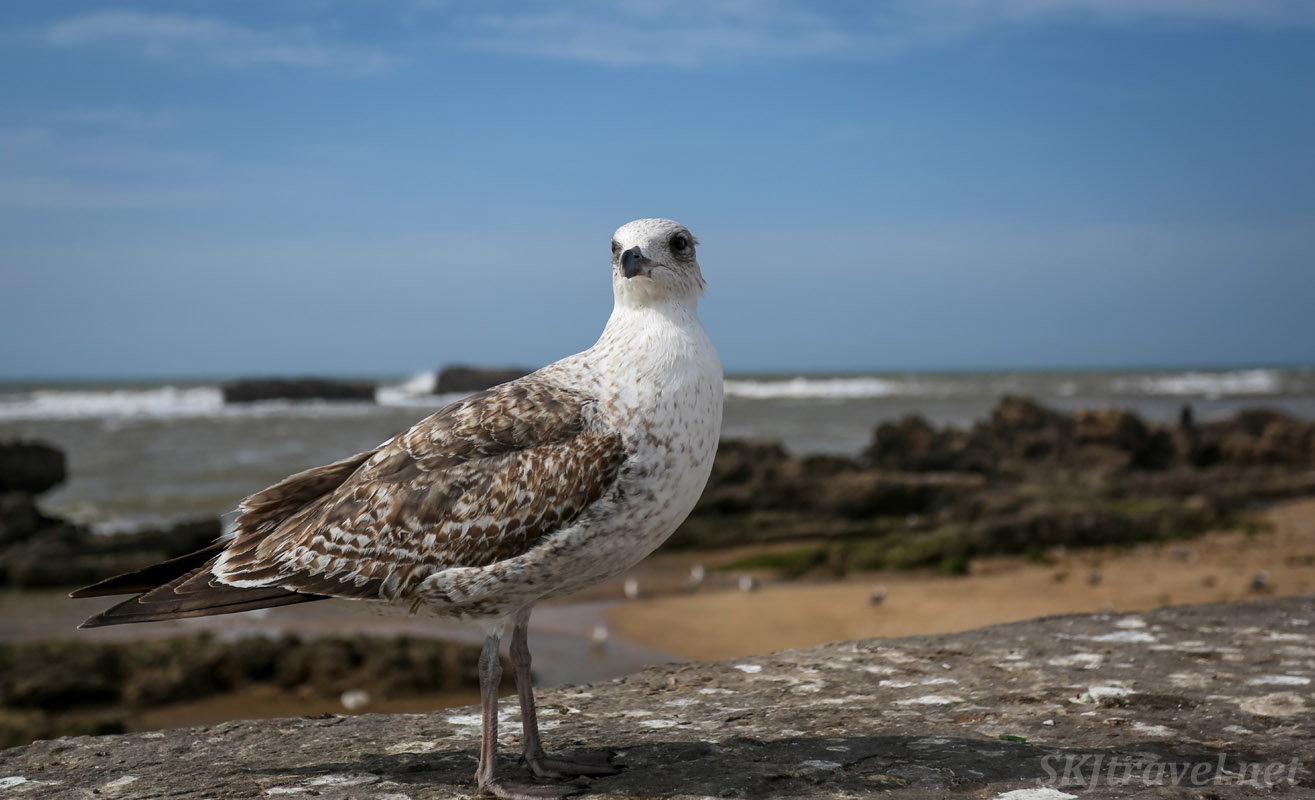 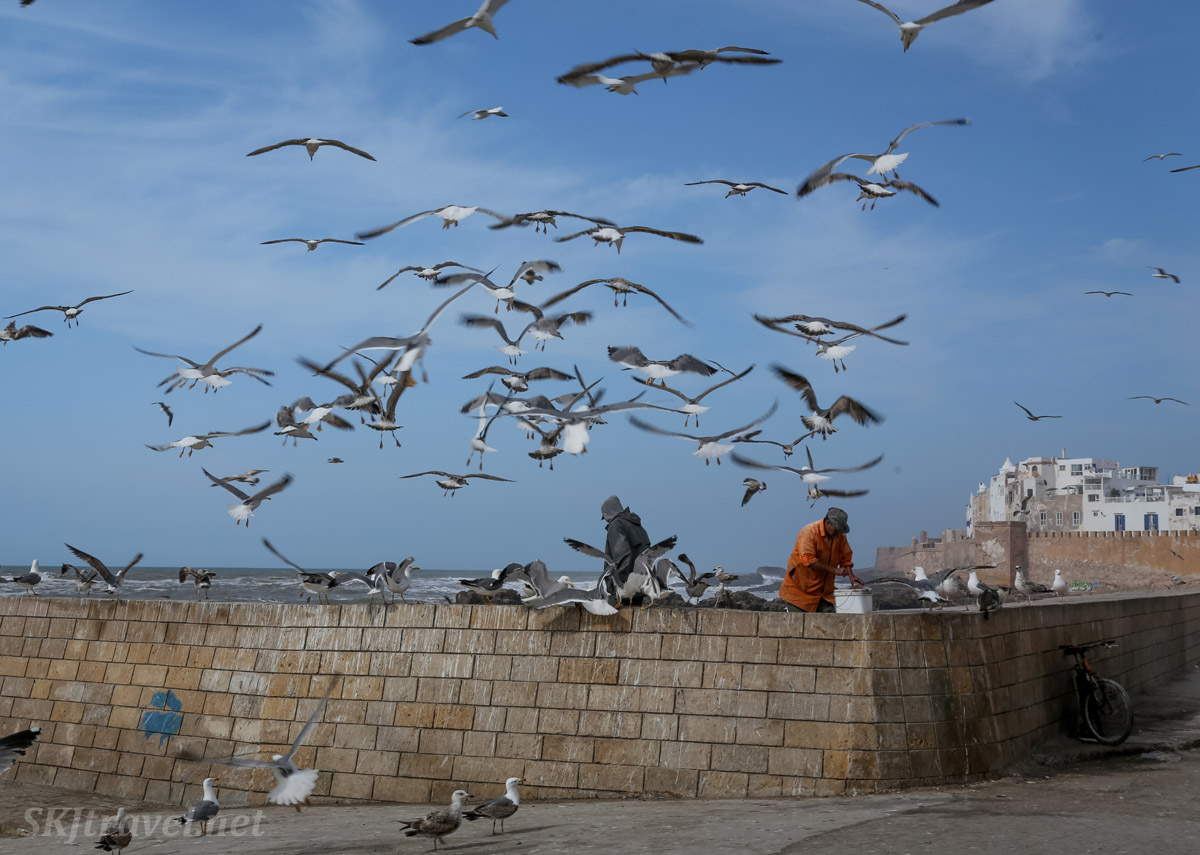 Ah ha! A blue boat! And someone repairing a blue boat! 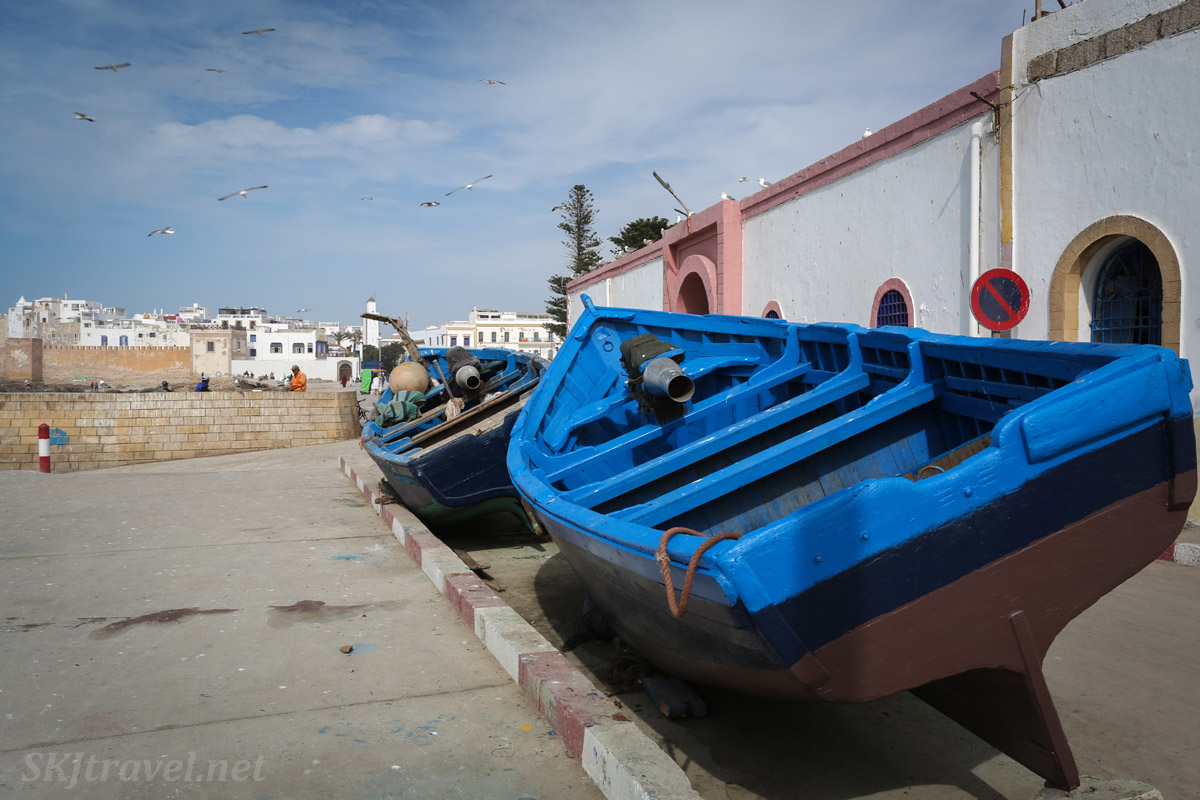 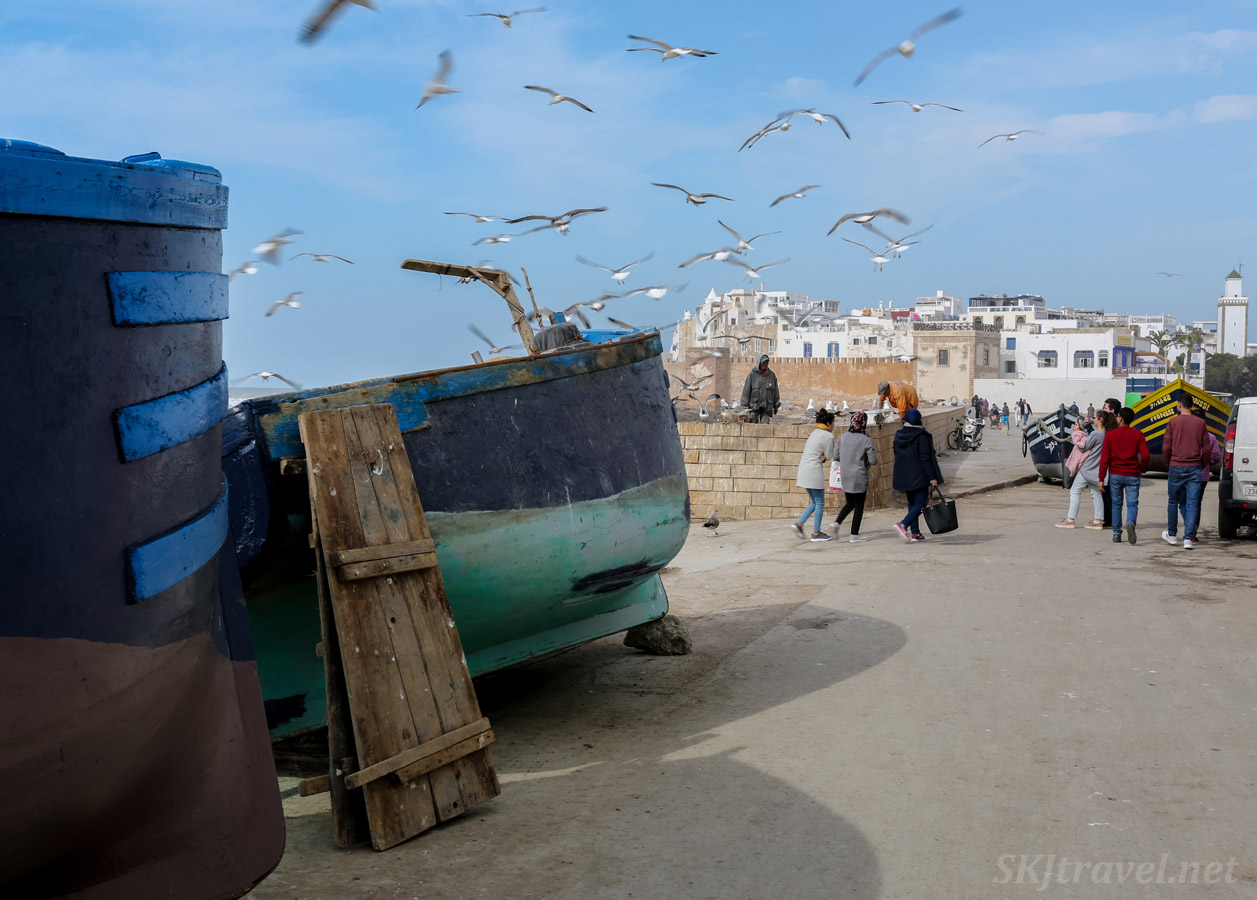 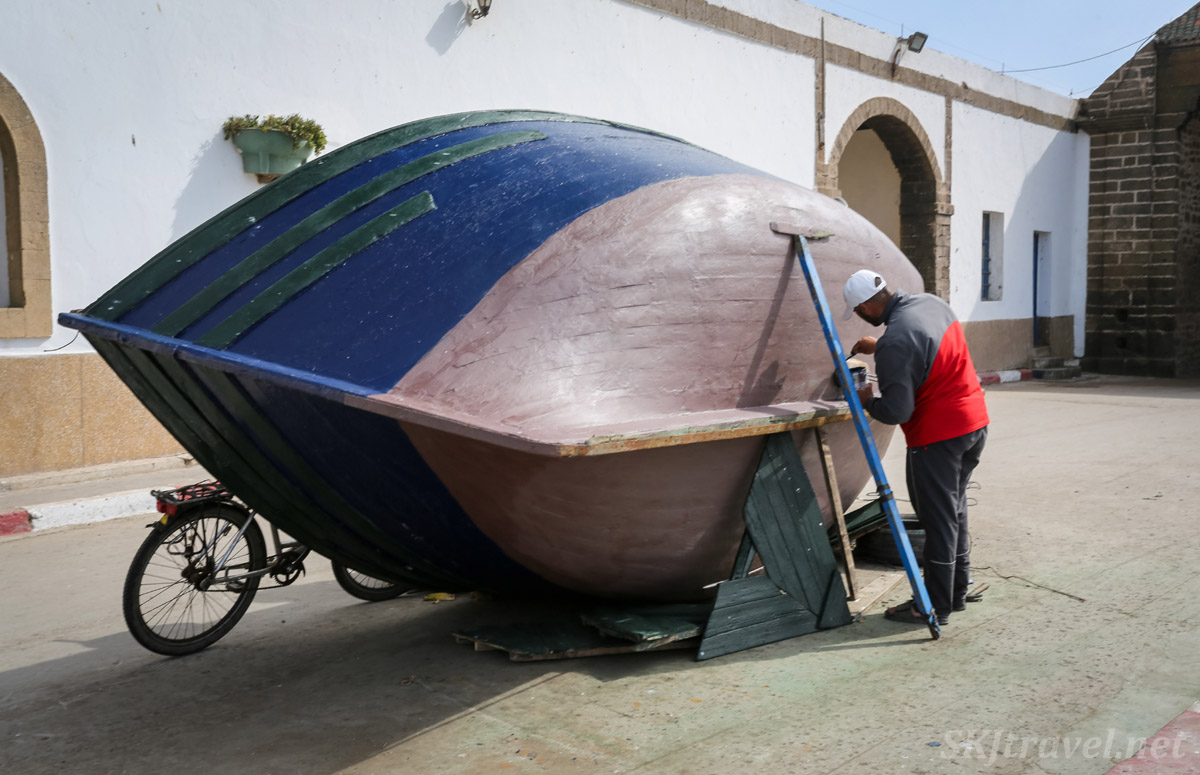 Then we passed a stone tower and found a bunch of blue boats and young men jumping down into the water next to them as if in a competition. OK, so I found the clumps of blue boats everyone raved about. Still didn't really see the big deal, but they were pretty enough, and it was a pleasant day out. 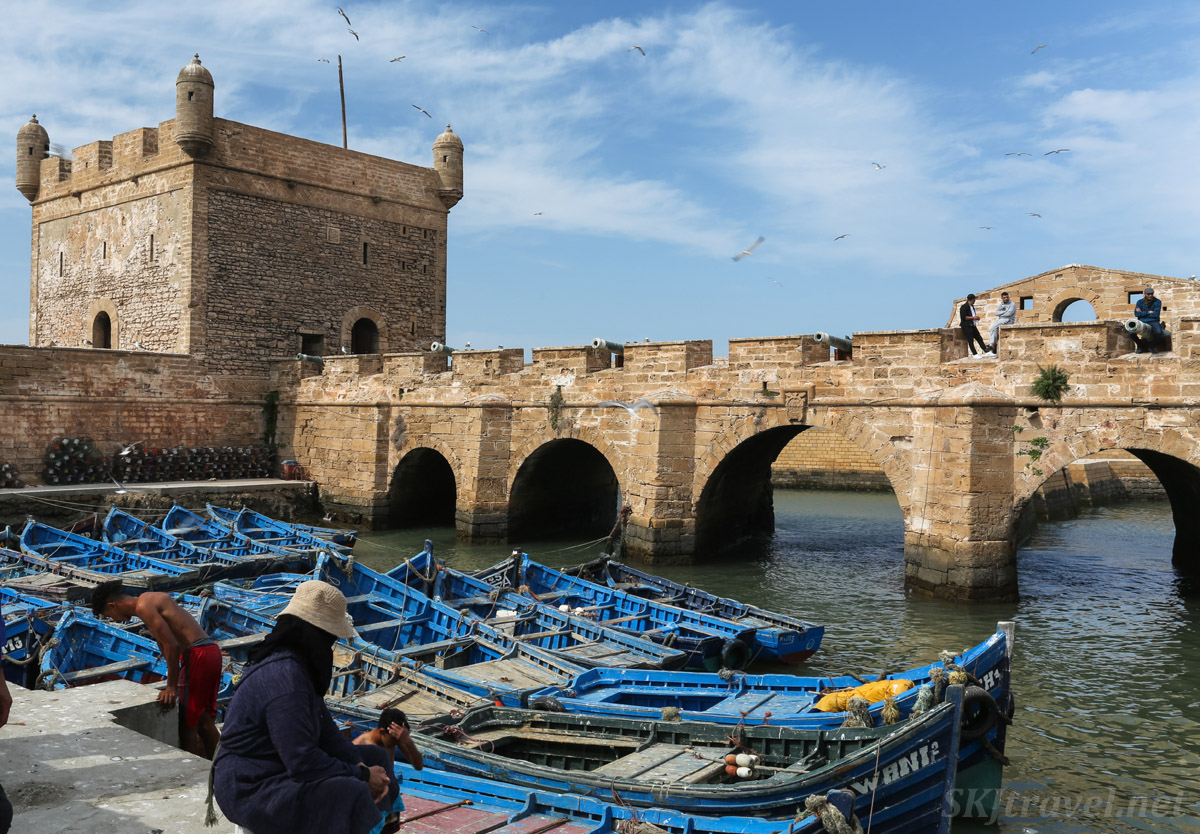 We continued walking and soon the promenade opened up into a vast fish market of people selling whatever they had just caught. 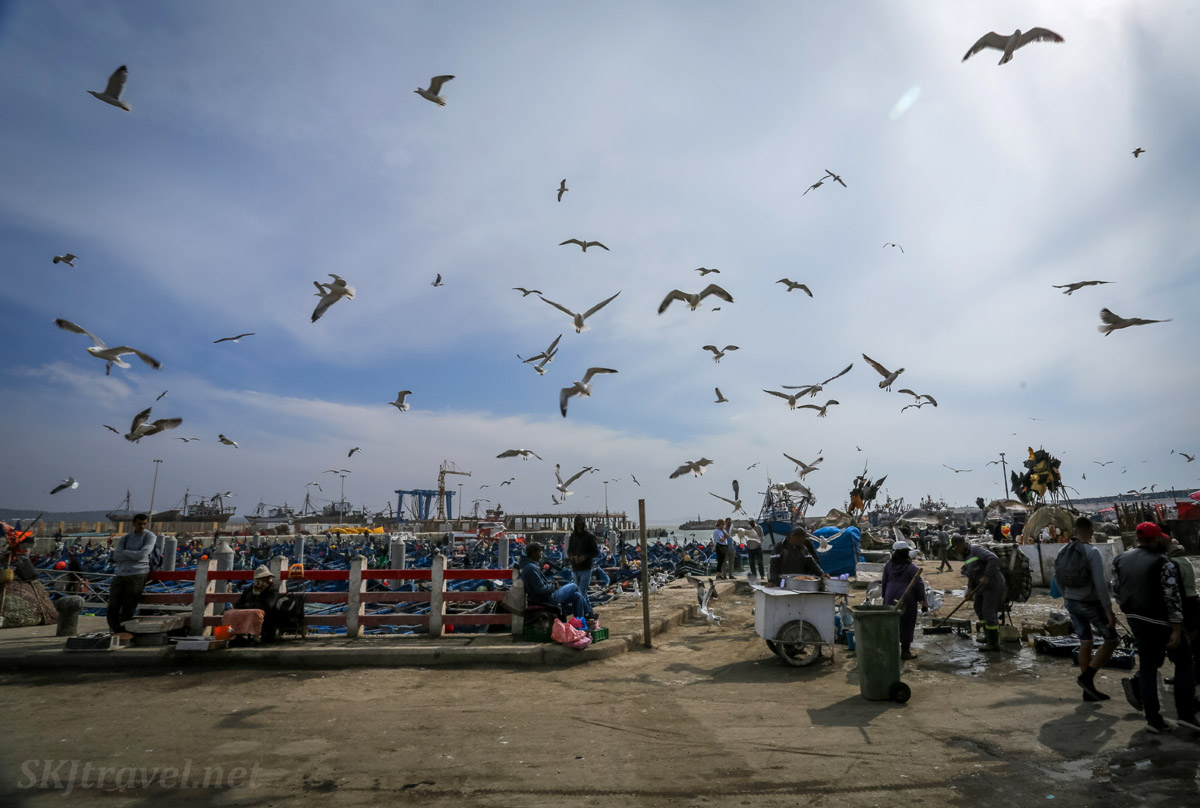 I inspected some of the items for sale. I think ocean dwellers are really cool, but once they're up land, I find them a little creepy. 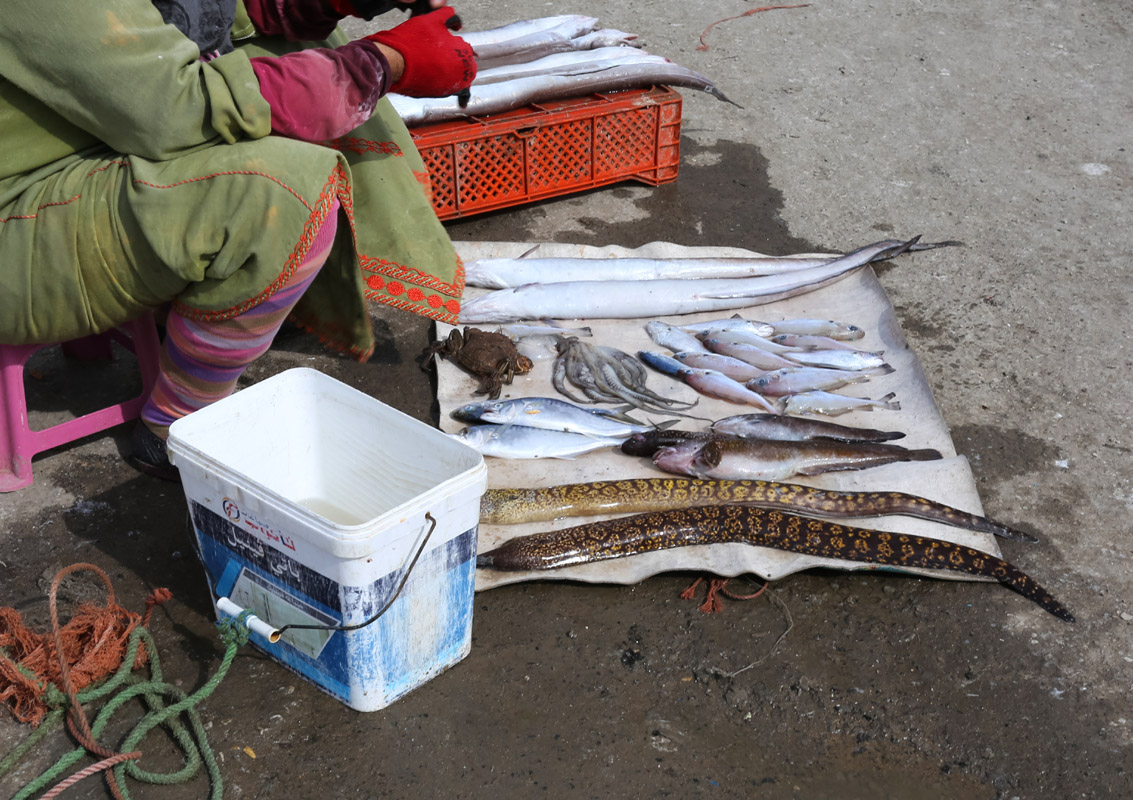 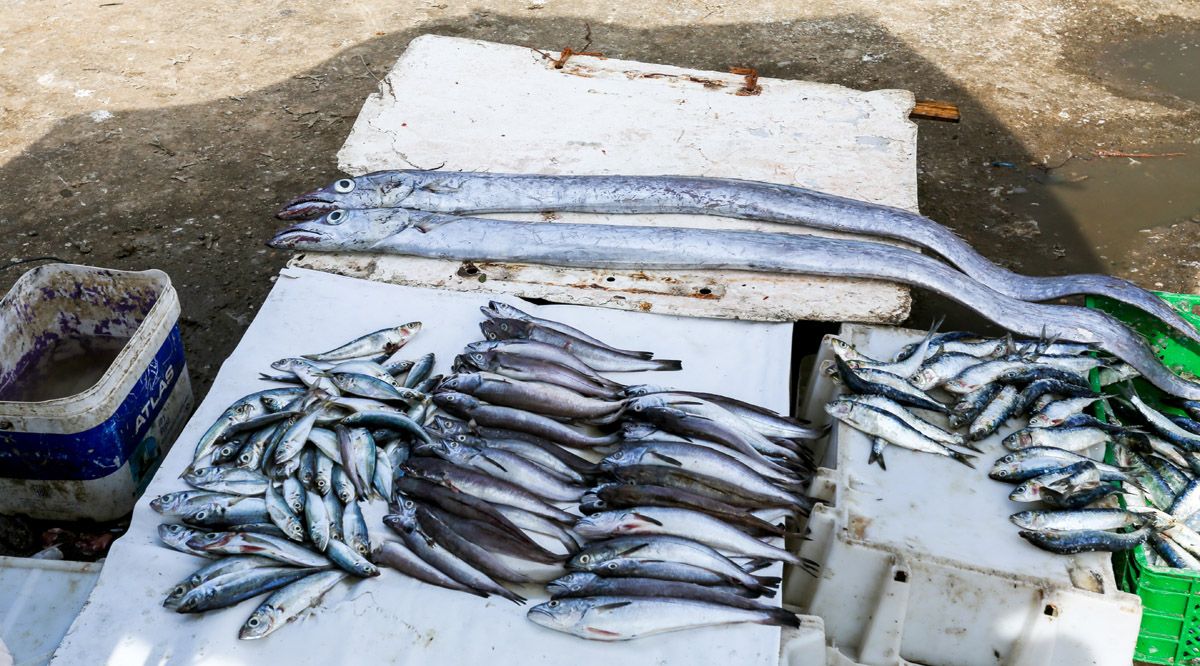 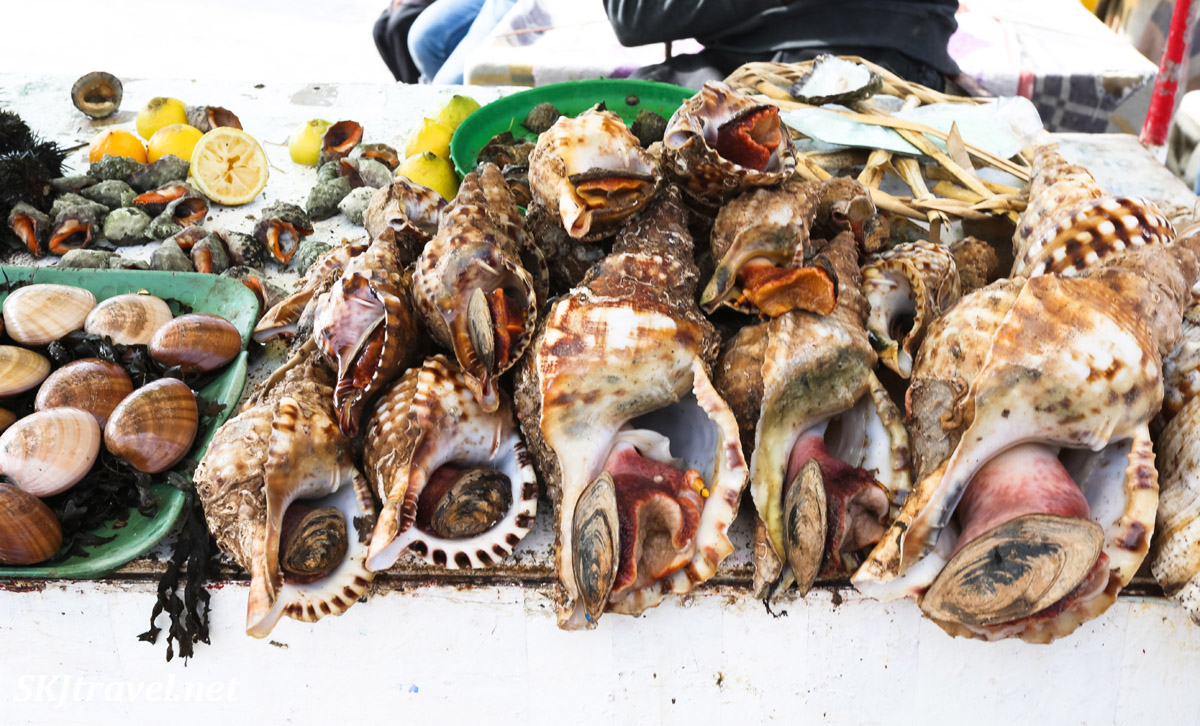 And then. OH. I guess *that's* the collection of blue boats everyone talks about. I didn't make a nice photo, but it shows you there are a quite a lot and why this city is known for them. They stretched on to the right past the limit of my wide angle lens. 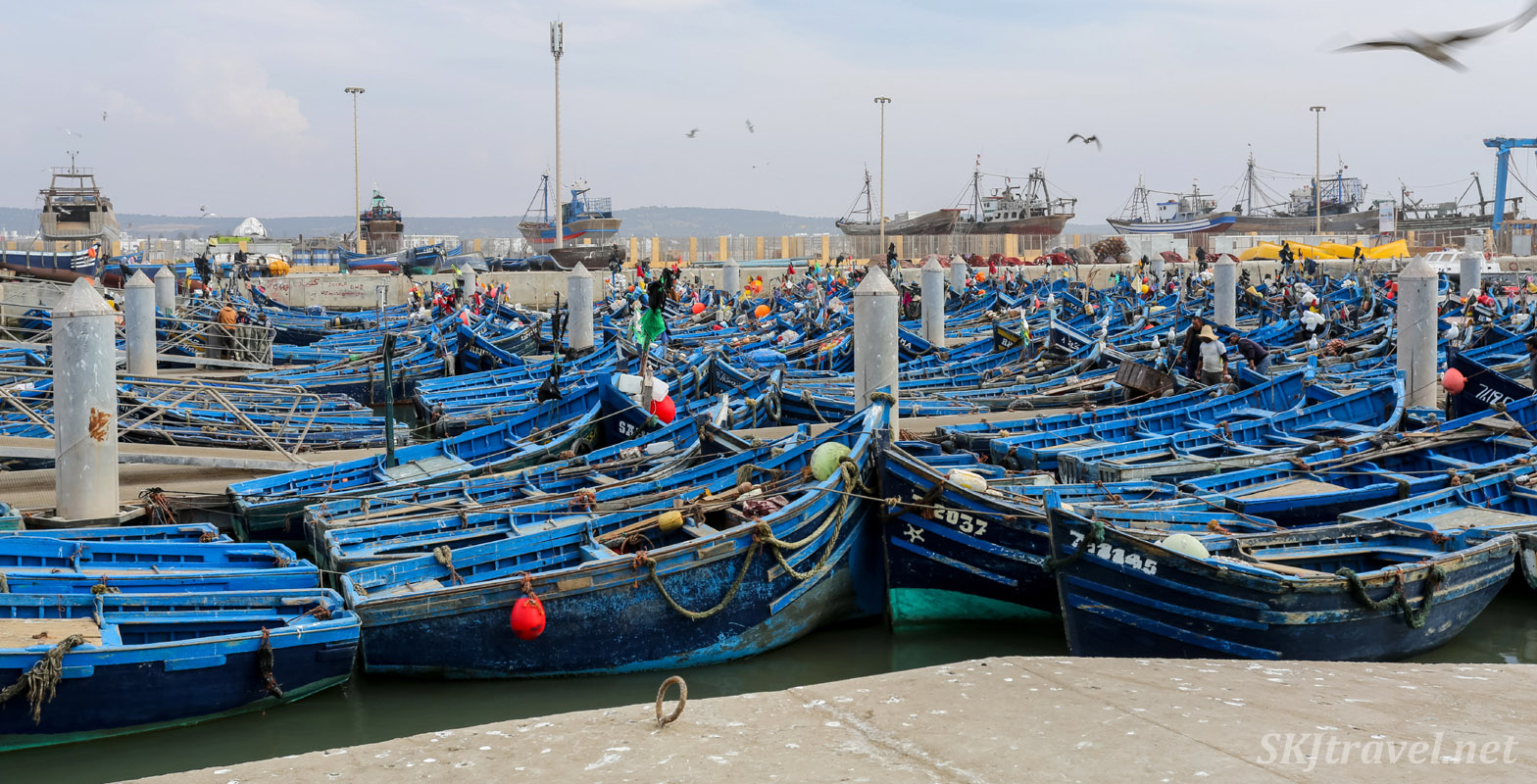 So it turned out to be a really neat place! Kind of overwhelming for us land lubbers, with all the boats, all the birds, all the dead fish on display, all the people -- unlike any other place we have been. Here are some shots taken while walking around the pier. 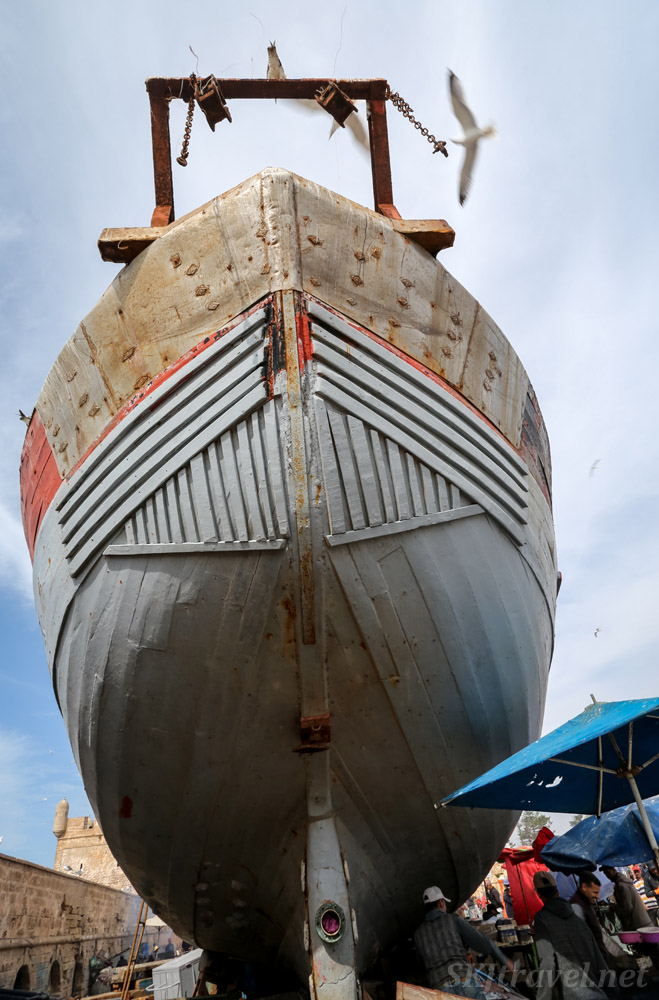 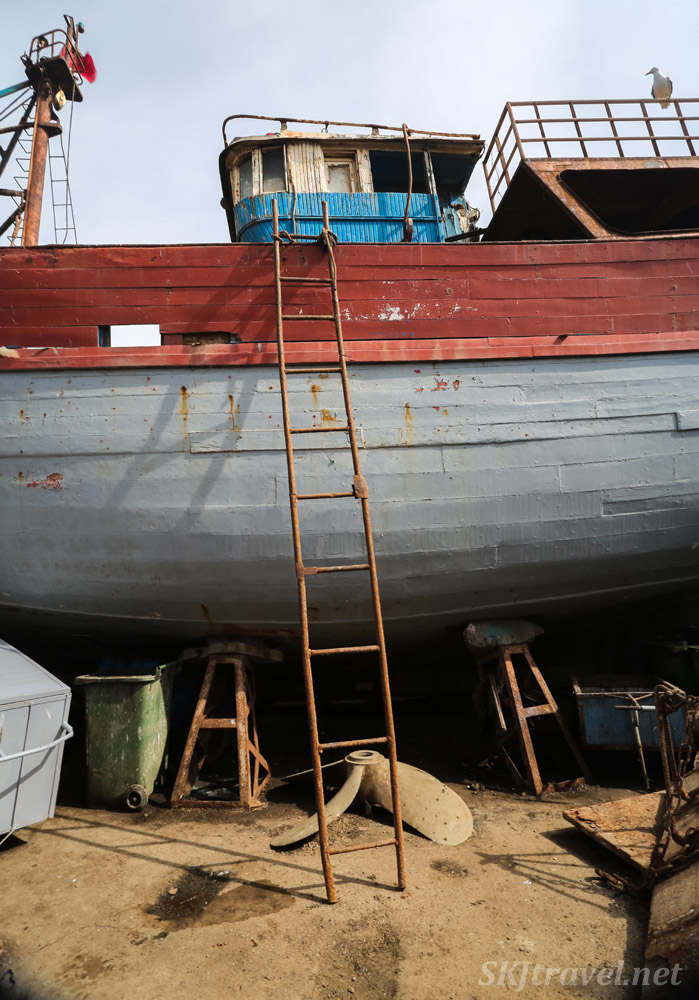 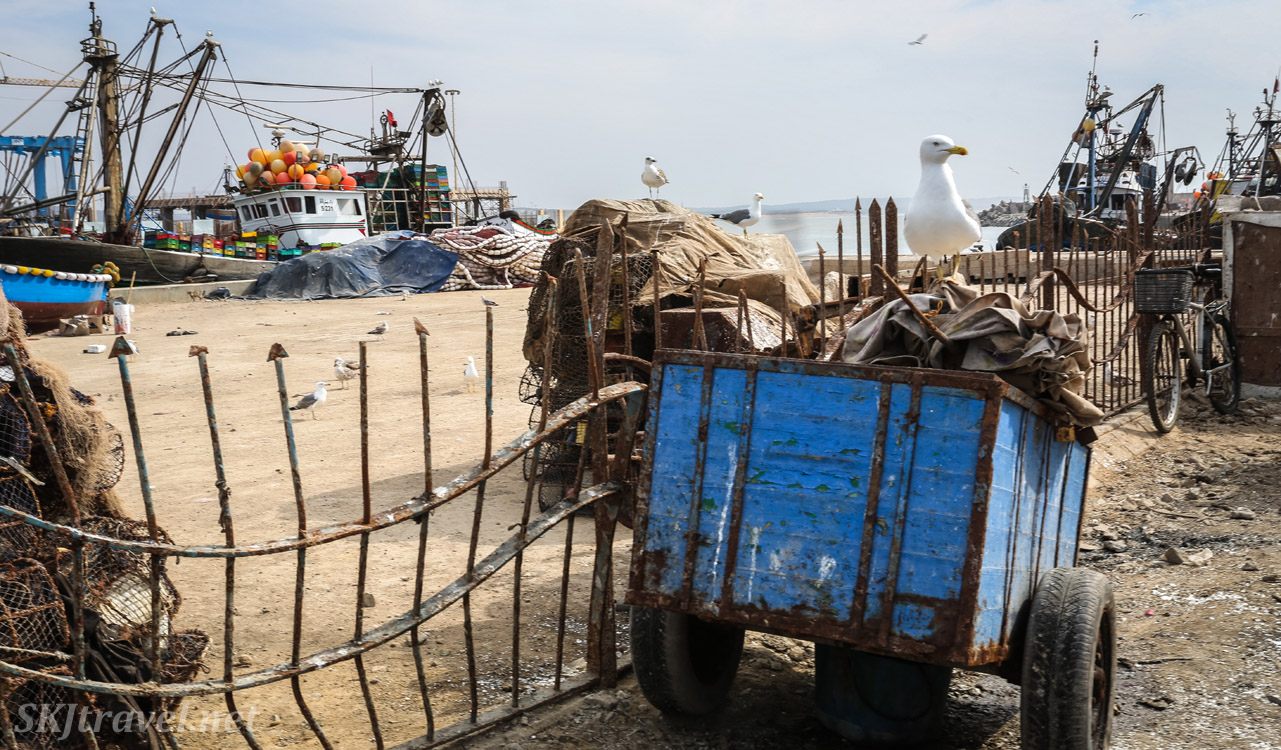 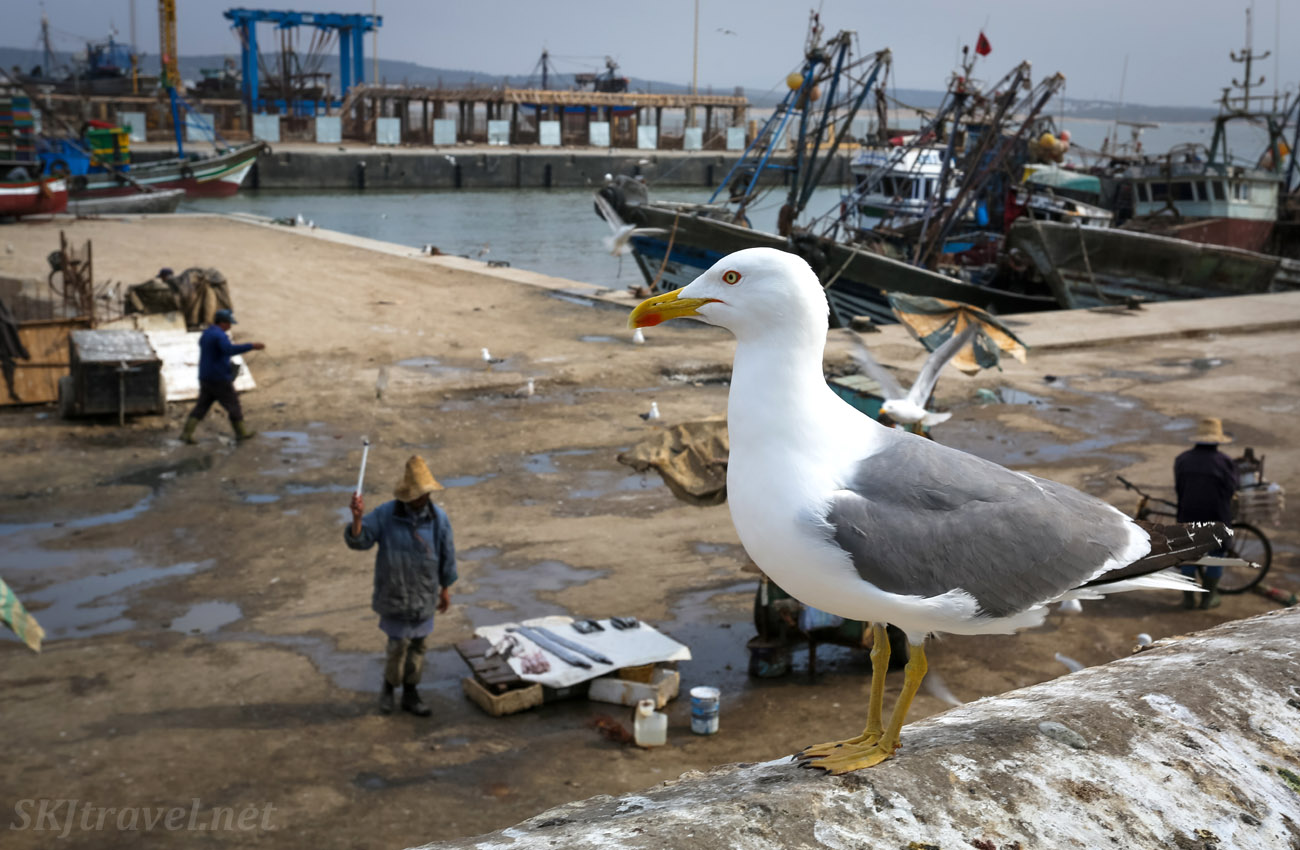 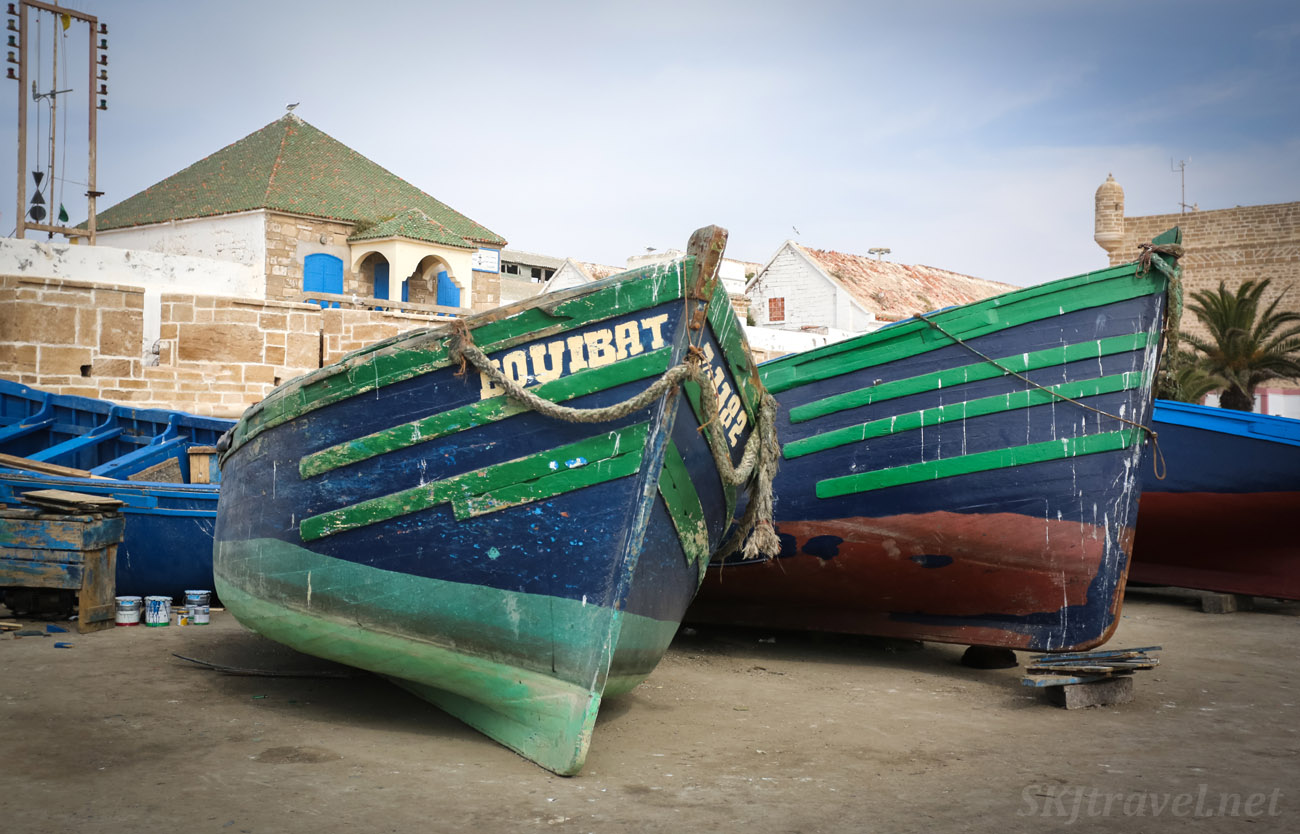 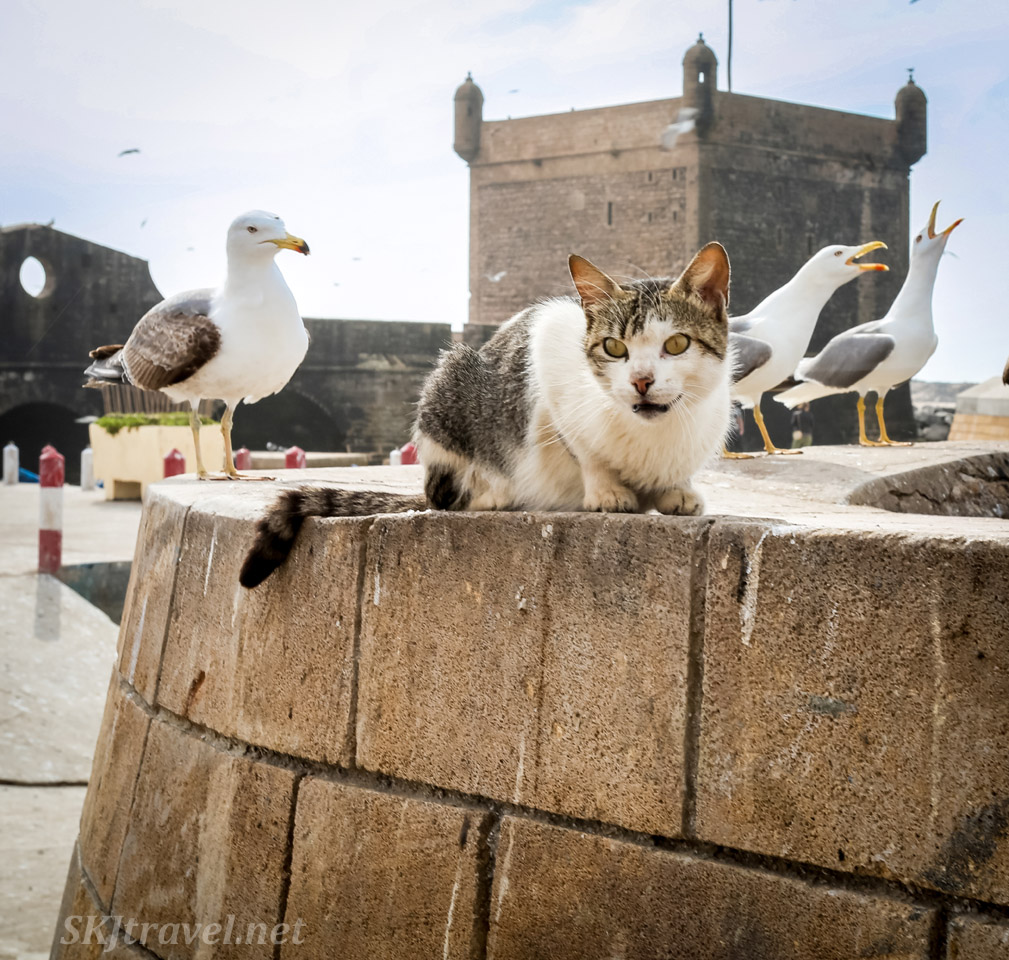 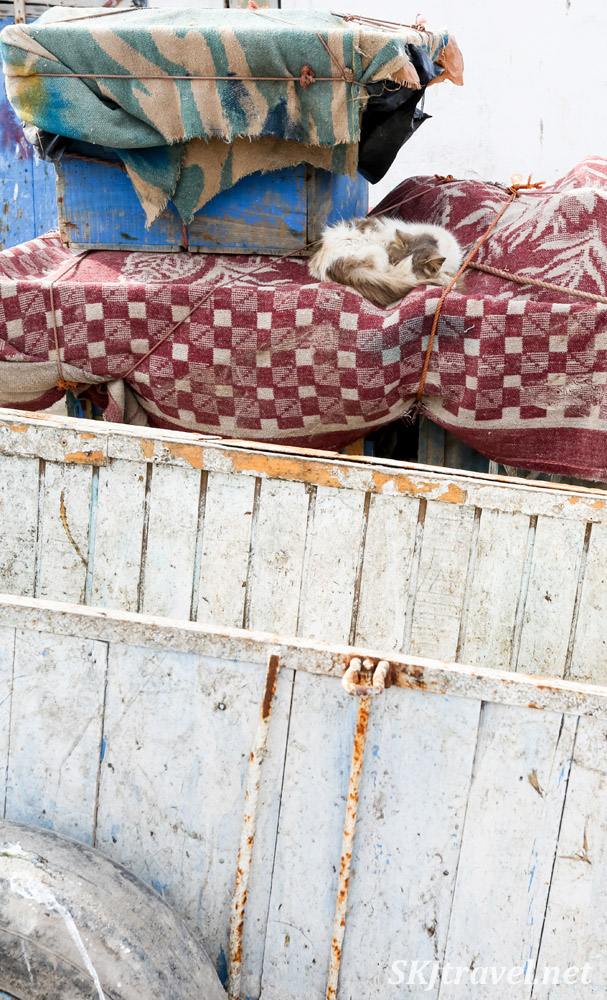 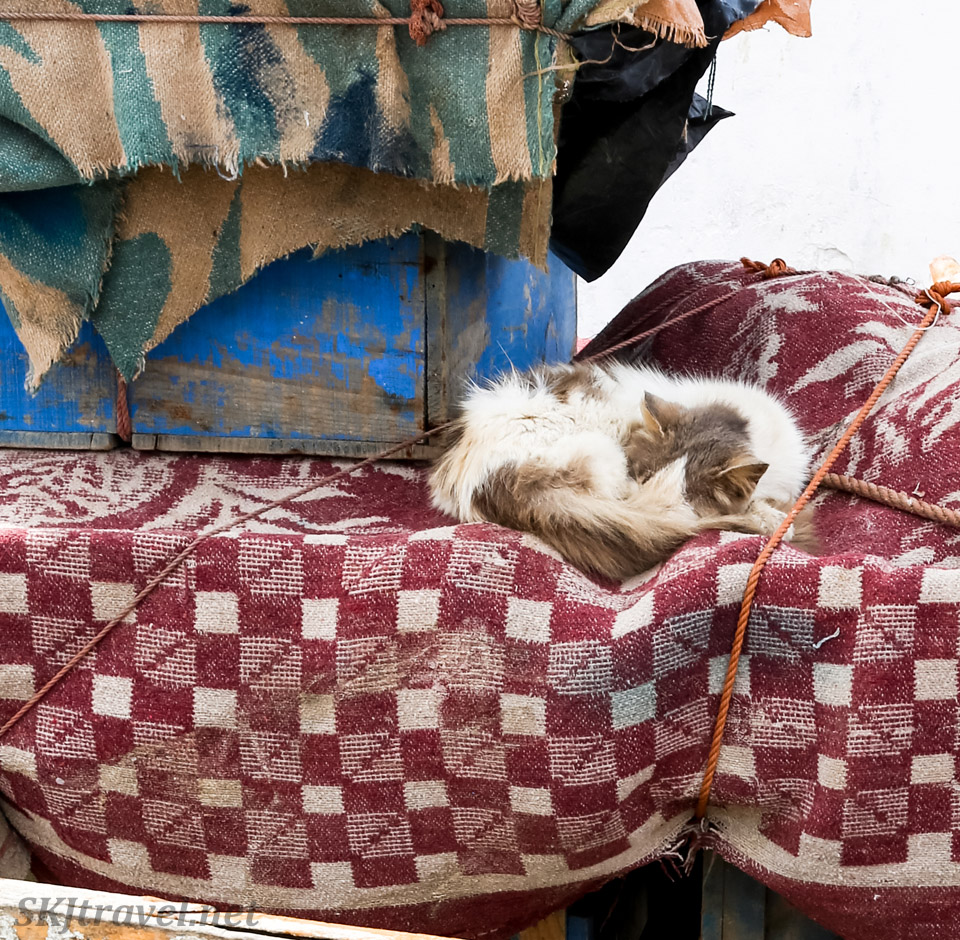 We didn't make it back to our guesthouse in the medina in Marrakech until after dark. Erik drove admirably working our way through thick traffic of cars, trucks, buses, mopeds, scooters, bicycles, donkey carts, people, coming back into the city, none of whom acknowledge there are actual lanes marked on the road. But fortunately we had open road to pass this truck quickly ... looking just a little lopsided! 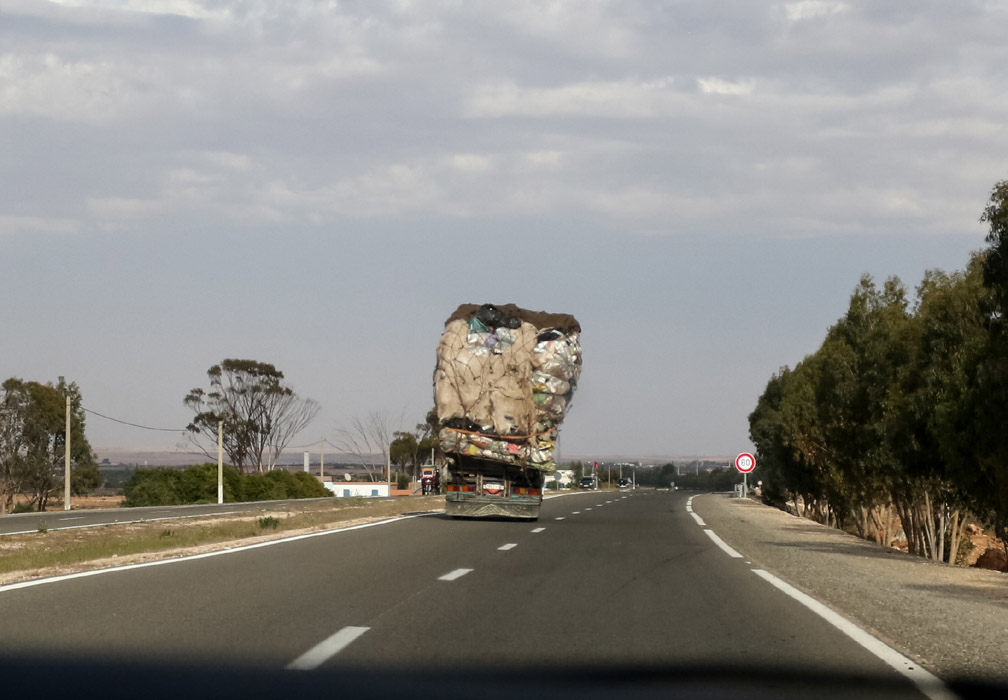 Oh, I'll pass on one thing about our drive out from Marrakech. I had already been warned by another Facebook friend that the cops were real sticklers about speed in Morocco, and that in a two-week visit he got two speeding tickets -- he was driving an SUV with his wife and baby, not really tearing it up. So I told Erik that and we were already prepared and committed to obeying the speed limits. At one police checkpoint, which are routine in many countries just to check paperwork, the policeman seemed to see dollar signs (dirham signs) when he looked in and saw foreigners. He gave Erik a ticket for speeding in a school zone (neither of us saw a lowered speed sign, and this school, if functional, was a lone building in the middle of nowhere) and charged 150 dirhams, roughly USD$15. But Erik was skeptical of the legitimacy of the "crime" and when the policeman asked if he wanted a receipt, he said, "Yes, I want a receipt so I know that money isn't just going into your pocket." Well, in the end he did not receive a receipt, but he did receive 50 of the 150 dirham back. So I guess it paid $5 to stand his ground. Word of warning to fellow future driving visitors.