My time in Armila was made possible by the La Wayaka Current residency program.

During our stay in Armila, we took an overnight trip to Anachakuna, another Guna village on the mainland. They are on the cusp of welcoming tourism to the village, but as of now, do not have experience in visitor accommodations. So we stayed in the very large house of the village headman. The house has a huge kitchen and a chef who cooked us a most excellent dinner. It was nice of them to accommodate us, and for me, I managed OK in this house because of my pretty extensive experience staying in remote, and shall we say "rustic," places. But probably the average tourist won't be thrilled with the crude plumbing (single outhouse toilet that didn't actually flush), unlaundered bedding and such. In relation to the non-flushing toilet, we asked our host where the toilet paper was for the loo. This caught him off guard, apparently not something they normally use. He quickly summoned a young man and sent him off with some money to go buy some for us. This made me laugh.

The lack of a shower, though, gave us the opportunity to see and experience how the locals bathe -- in the river (really more of a stream). Basically, you want to be the guy the furthest upstream above everybody else, haha, so you don't get their soap or dirty water. I actually appreciated this opportunity.

Just like Armila, Anachakuna is laid out against the ocean so that the villagers have the ocean bounty in front of them and the jungle bounty behind them. 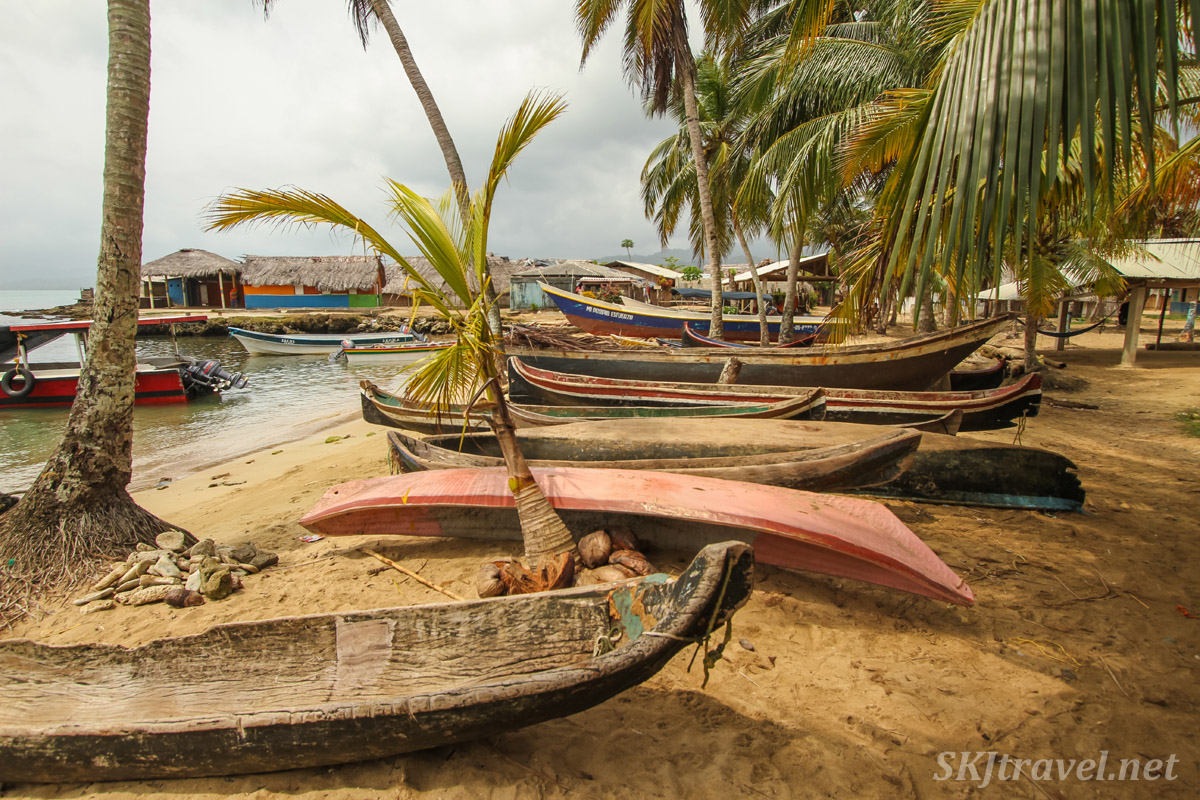 It is a very neat and tidy village, and planned out along a grid. So whereas Armila is kind of a random meandering of paths, Anachakuna has straight paths like a modern town would. In the background of the photo above, you see a round thatched roof right next to the water. This is a village bar. Whereas Armila decided to limit alcohol sales in its village to only the weekends, Anachakuna decided to allow sales every day, but only between 9:00 p.m. and I think it was midnight, or maybe 11:00 p.m. And unlike Armila that had a couple places that sold only one brand of beer and that's it for alcohol selection, this bar had many kinds of beer including my favorite. (um ... leaving space here for when I remember what it was called, haha.) In fact I bought a few extra and took them with me back to Armila. It looked like it could be a lively place, with a big open floor which could be used for dancing or whatever.

Here are a few photos from the "streets" of Anachakuna. Although it has a very different feel from Armila, it still has the same Guna style ... if that makes sense. I think you can even discern that from comparing photographs of the two villages. But here is Anachakuna: 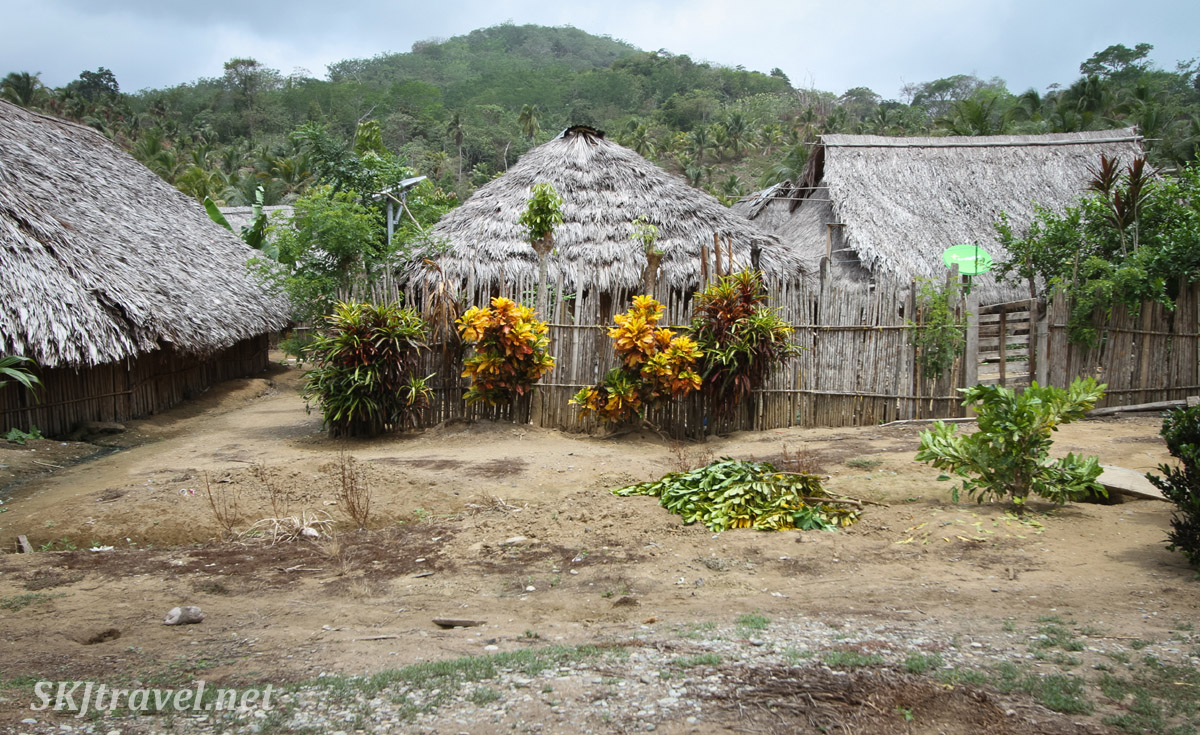 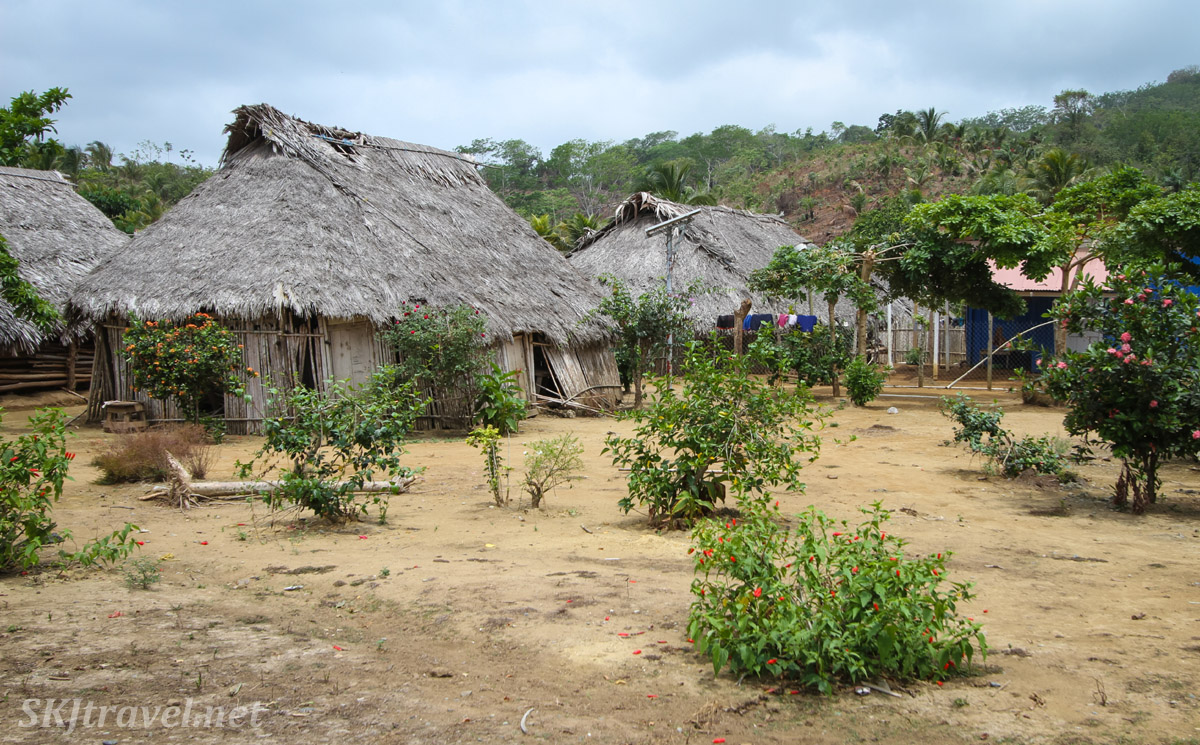 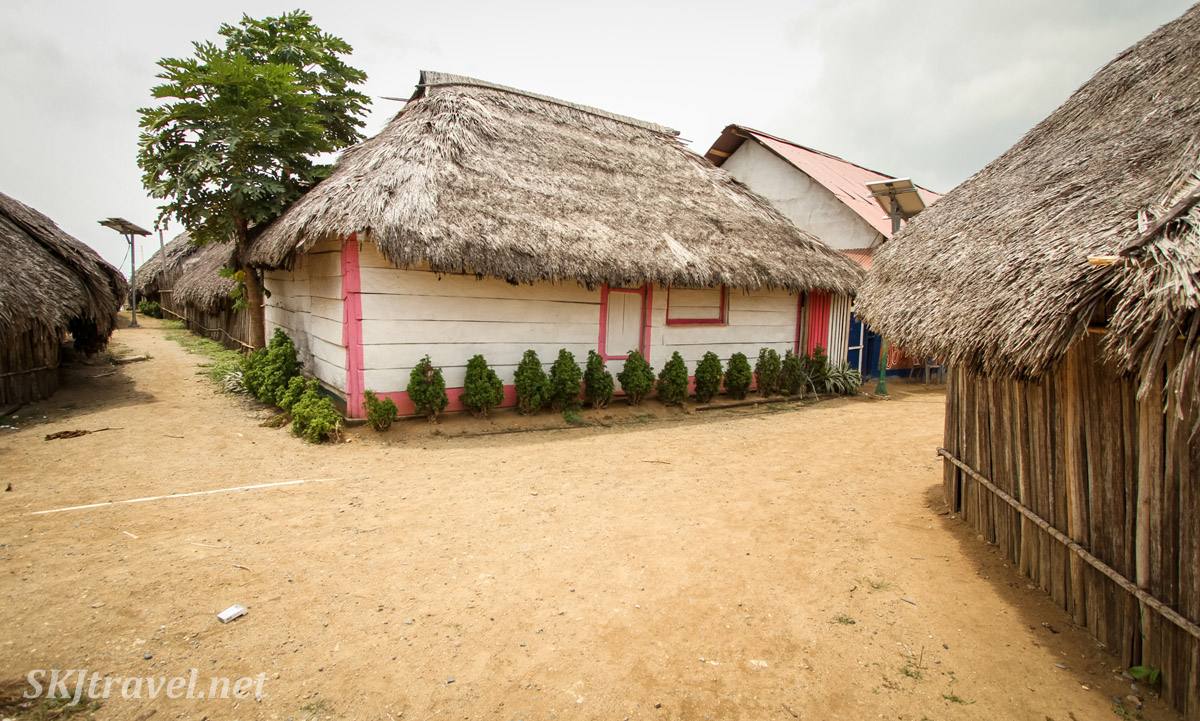 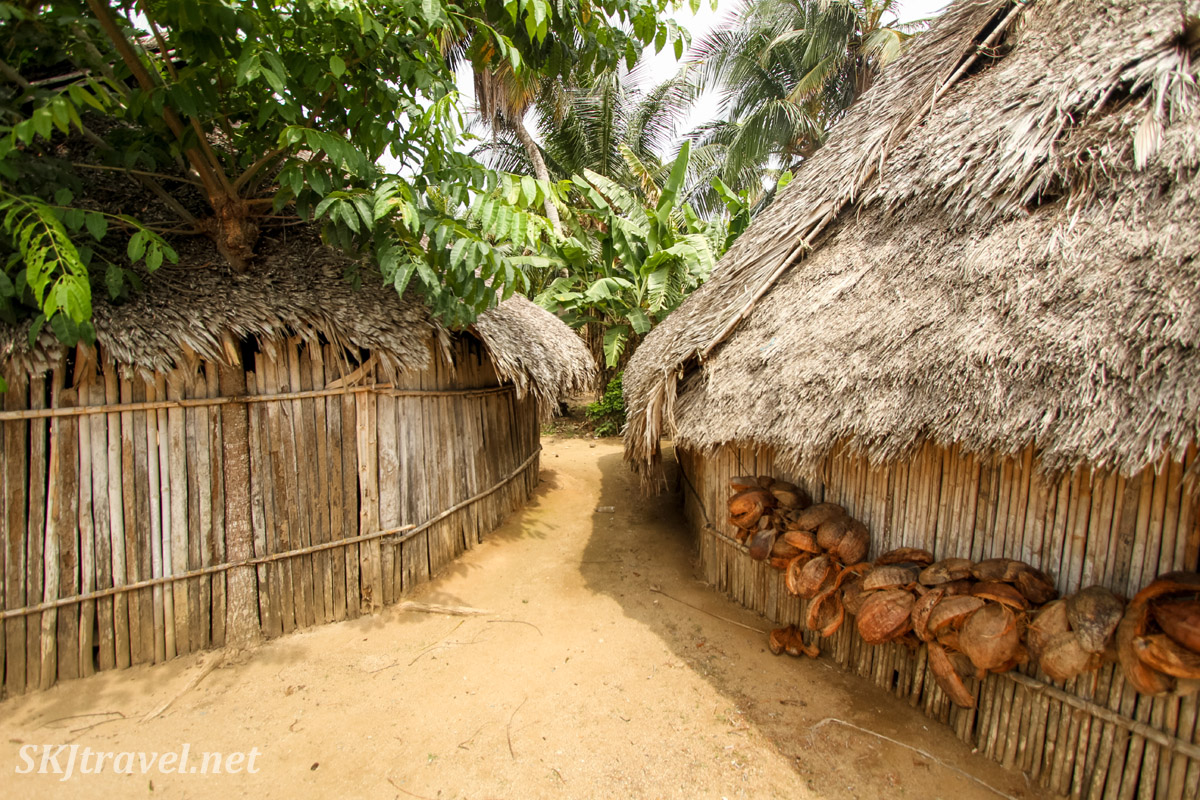 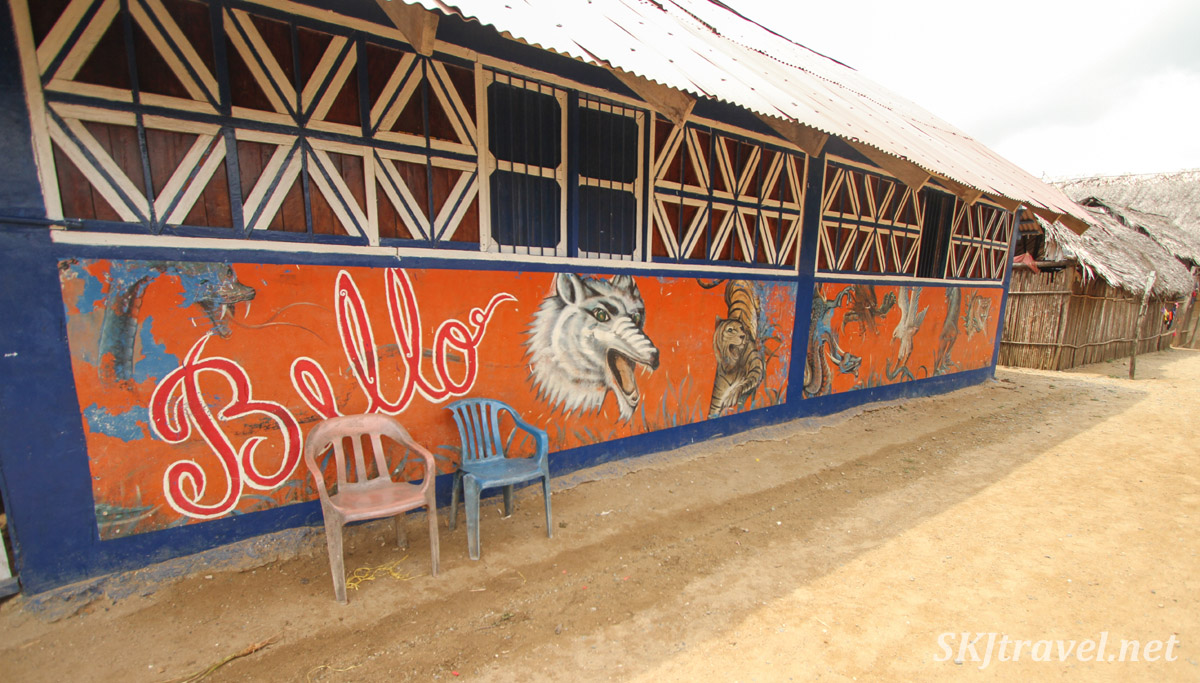 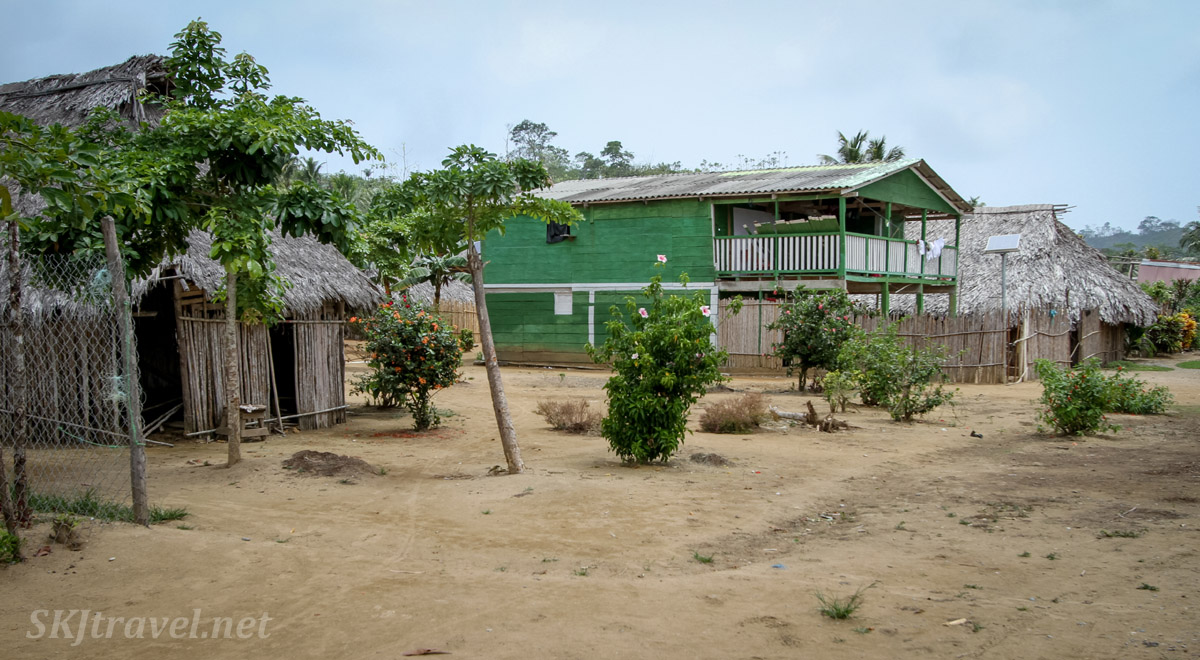 And of course I had to take a picture of the kitten! But it was a funny exchange asking the family to whom it belonged if I could take its picture. Cat in Kuna language is "misi." So when I held up my phone camera and asked to take a picture, I wanted to make sure they understood I wanted it of the cat, not of them. So I kept saying, "misi?" "Misi?" It took them awhile to understand my request, and when they did, they had a hearty laugh. What weirdo wants a picture of a kitten? 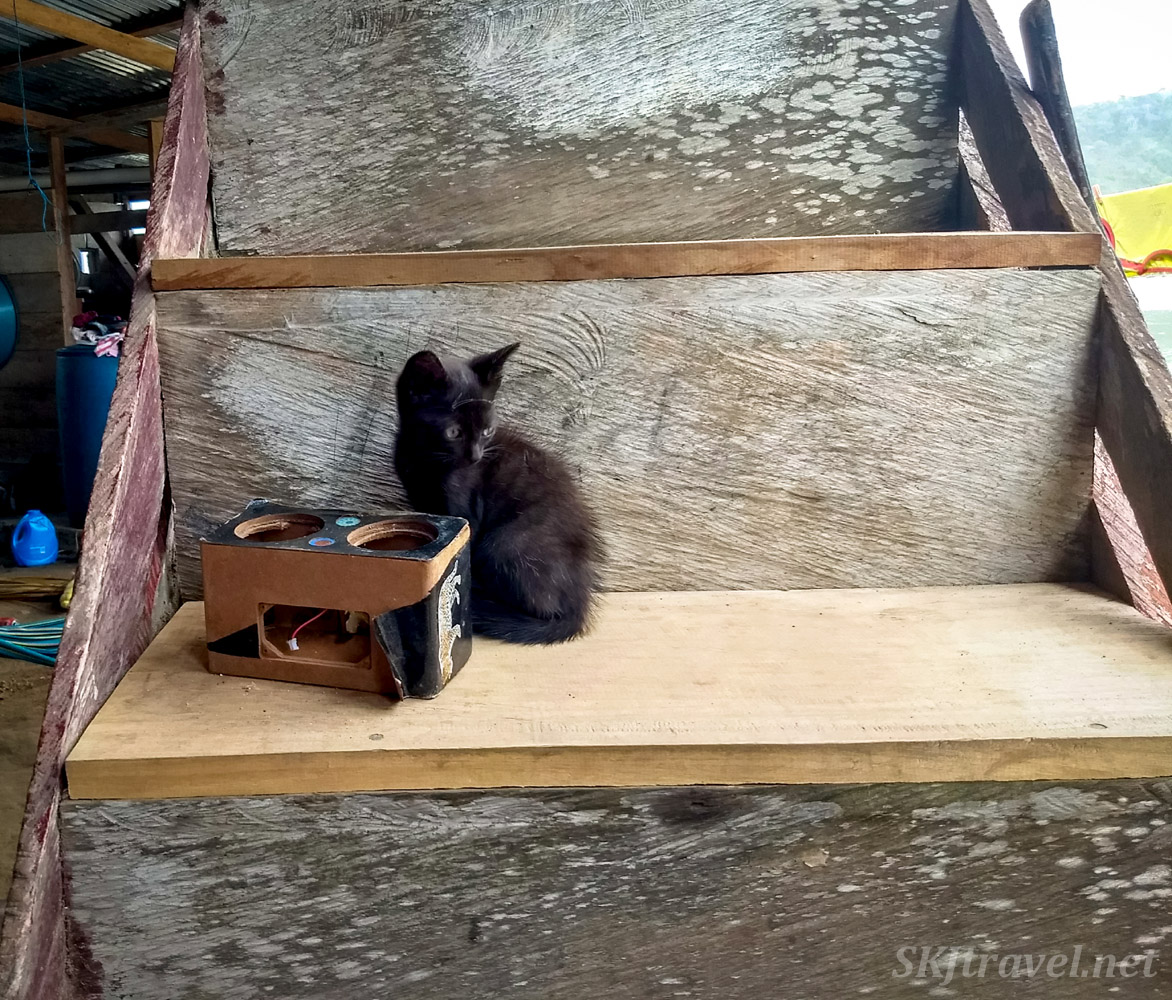 And on the other end of the cute scale, is this crazy huge bug hanging out in the dining area of our accommodations. 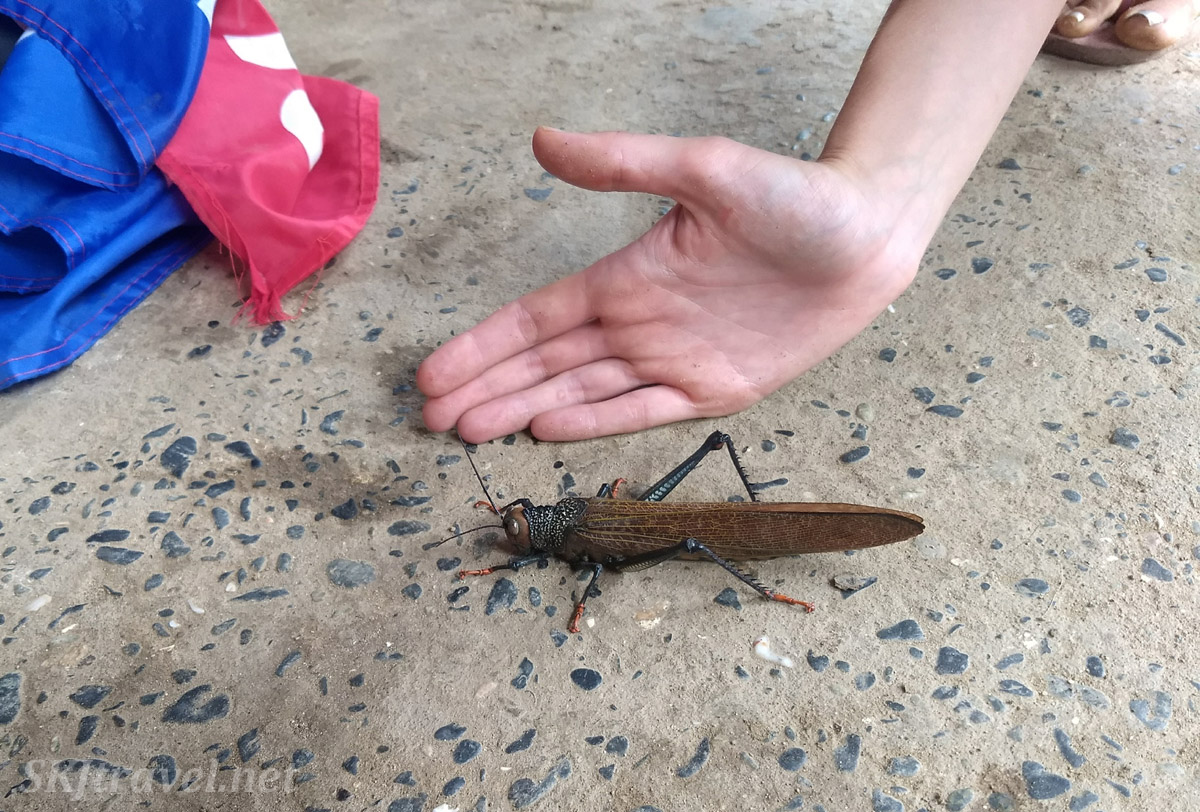 One of the best things I witnessed in this whole trip was a little scene in the dining/common area of the headman's house, where we were staying. I think it's just because it was so removed from my world and at first appeared so random. We were sitting quietly at a table, I think probably drinking some water or something, and across the room several Guna women were gathered around the headman. He had what appeared to be a ledger in his hands and they were all calmly discussing something in the Kuna language. The women in their beautiful molas and legs and arms full of winis up to their knees and elbows, some of them wearing headscarves. I was thinking what a pleasant scene it was to witness, something nobody back home of my acquaintances could imagine, when suddenly -- and I mean very suddenly, at the drop of a hat -- the women all jumped up out of their seats and sprinted out of the house, clearly very excited about something. It left us all a little stunned. Whatever could have happened?

They returned awhile later and we learned that the politician who had won the recent election in their district came to the village by boat to say hello and thank his constituents. I've never seen people more involved in politics than the Guna. They take their elections very seriously and apparently are ecstatic when their man wins. I've also never seen a group of people vacate their seats with such alacrity. Truly impressive.

The other seemingly random sight, and very unexpected and anachronistic in this traditional village of wooden canoes and bamboo, thatch-roofed huts, are these rusting remains of machinery. In the 1940s there was a large banana business based here, even with a train running through the jungle, to service this banana trade. We visited a place upriver from Armila where there used to be a large cement office building beside the railroad tracks. The jungle has digested pretty much every trace of the building, and it was rather shocking to learn it had been there. 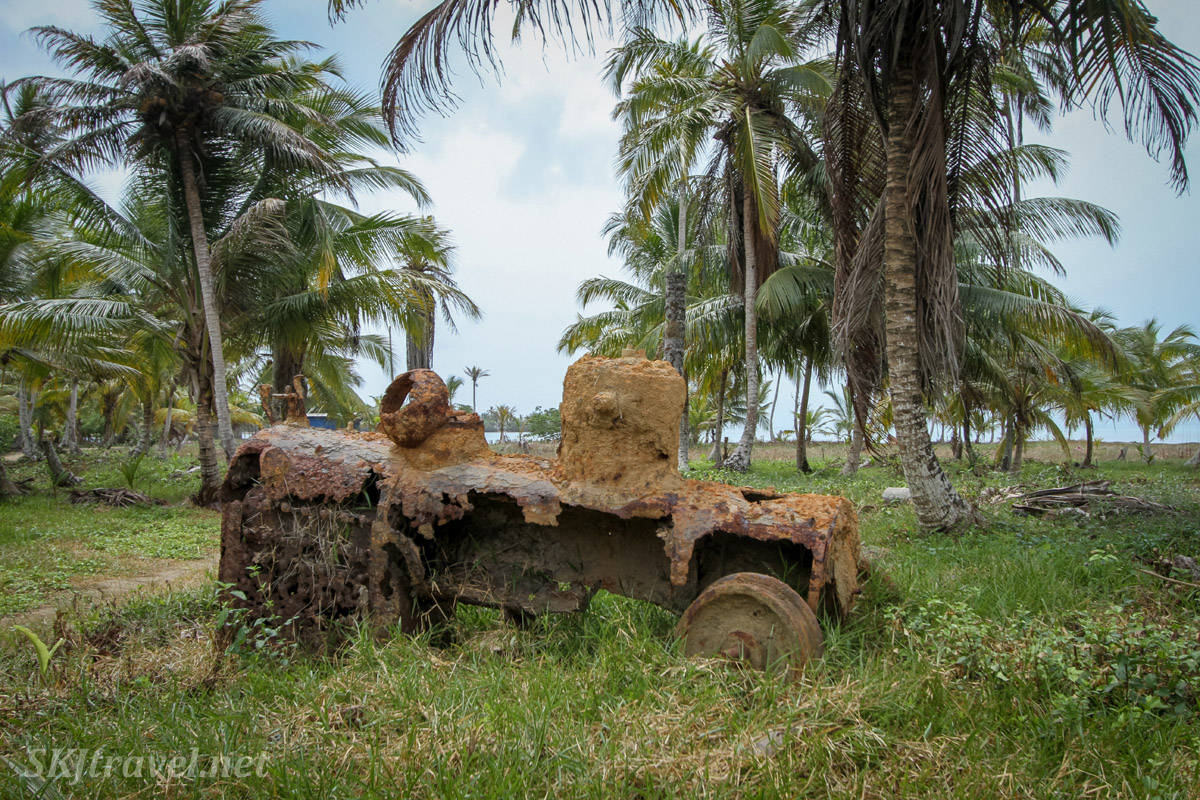 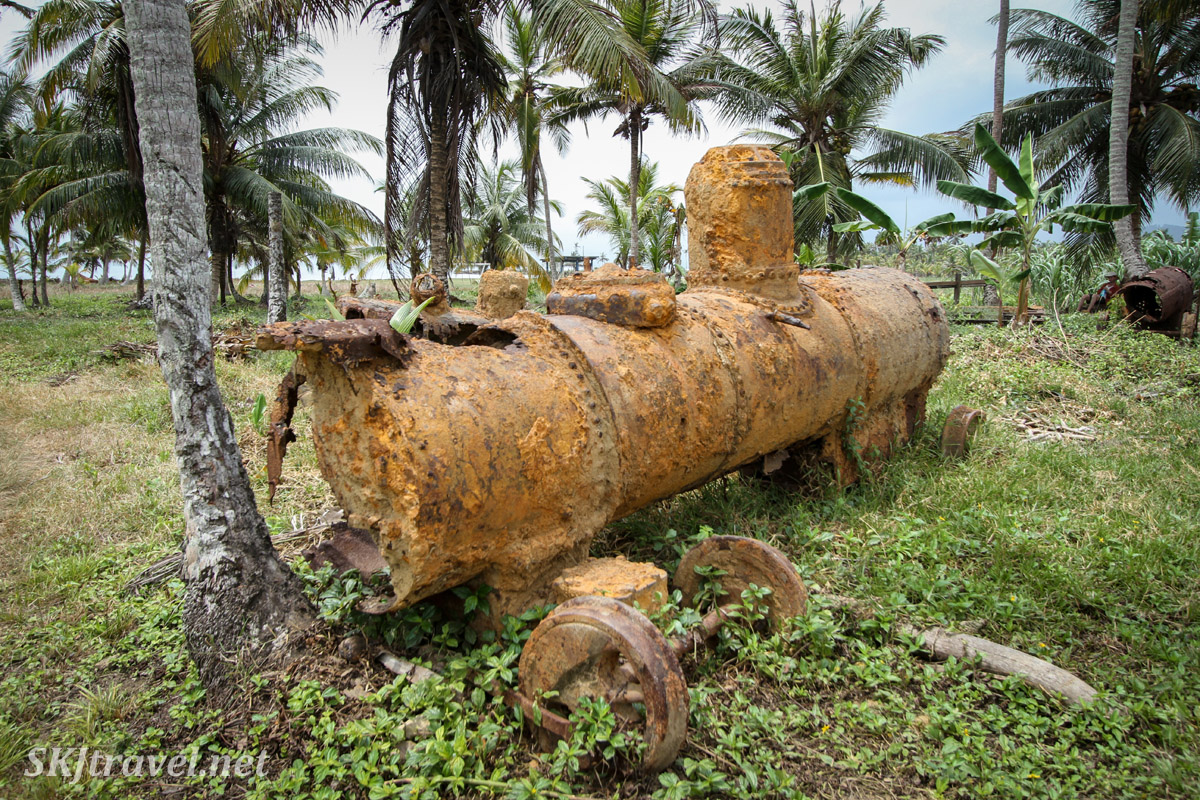 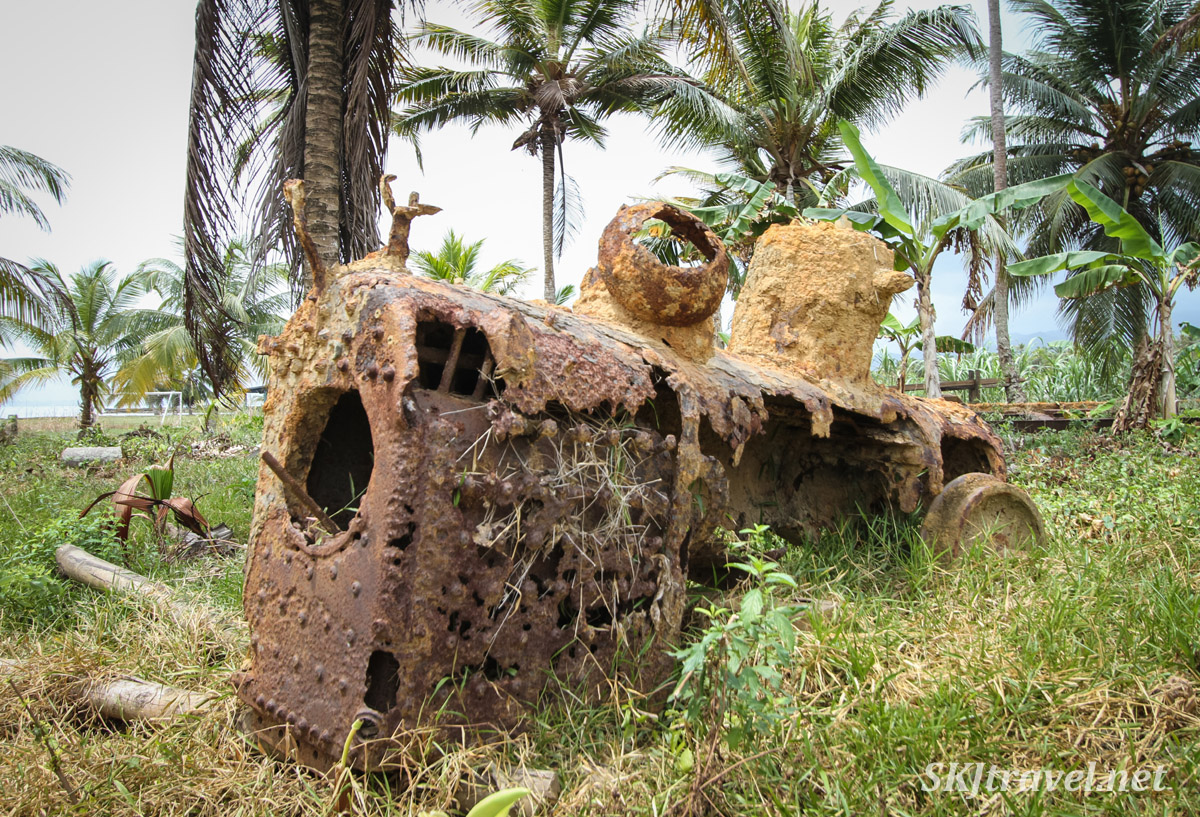 Then we took a jaunt to some Edenic hideaways ... beautiful sand beaches, clear blue water, lots of shells to collect. A cold drink made it perfect as we just sat in the water like castaways. (and notice my wini on my wrist!)

Interesting interior of a seashell: 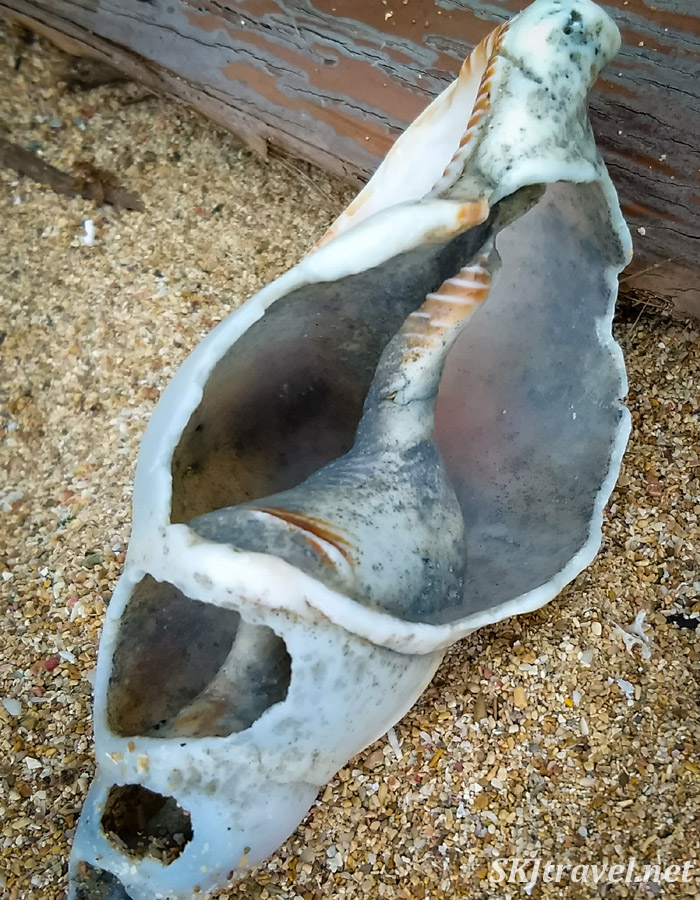 That beach above was an island, whereas this beach was further down the mainland from Armila. The sky was stormy and eventually it rained on us. In weather as warm as it was, being rained on in the water was perfectly delightful. This beach had some interesting tidal plants and driftwood. 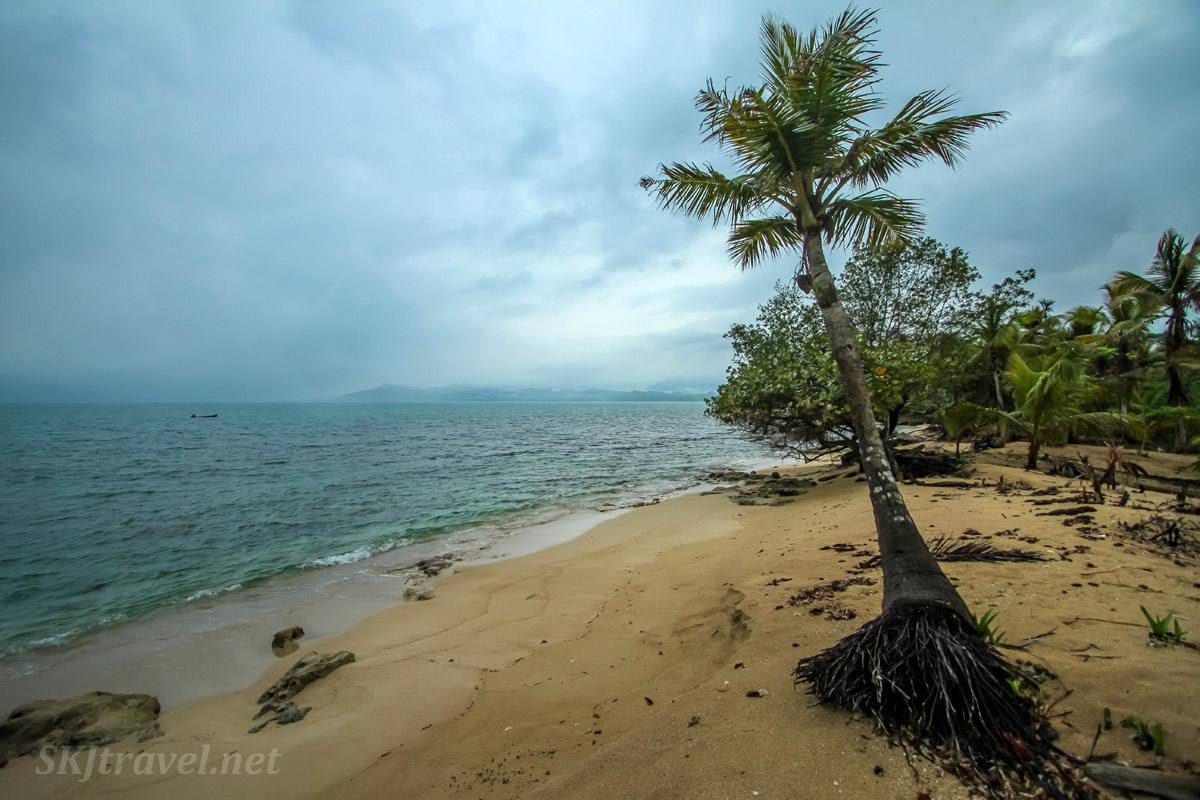 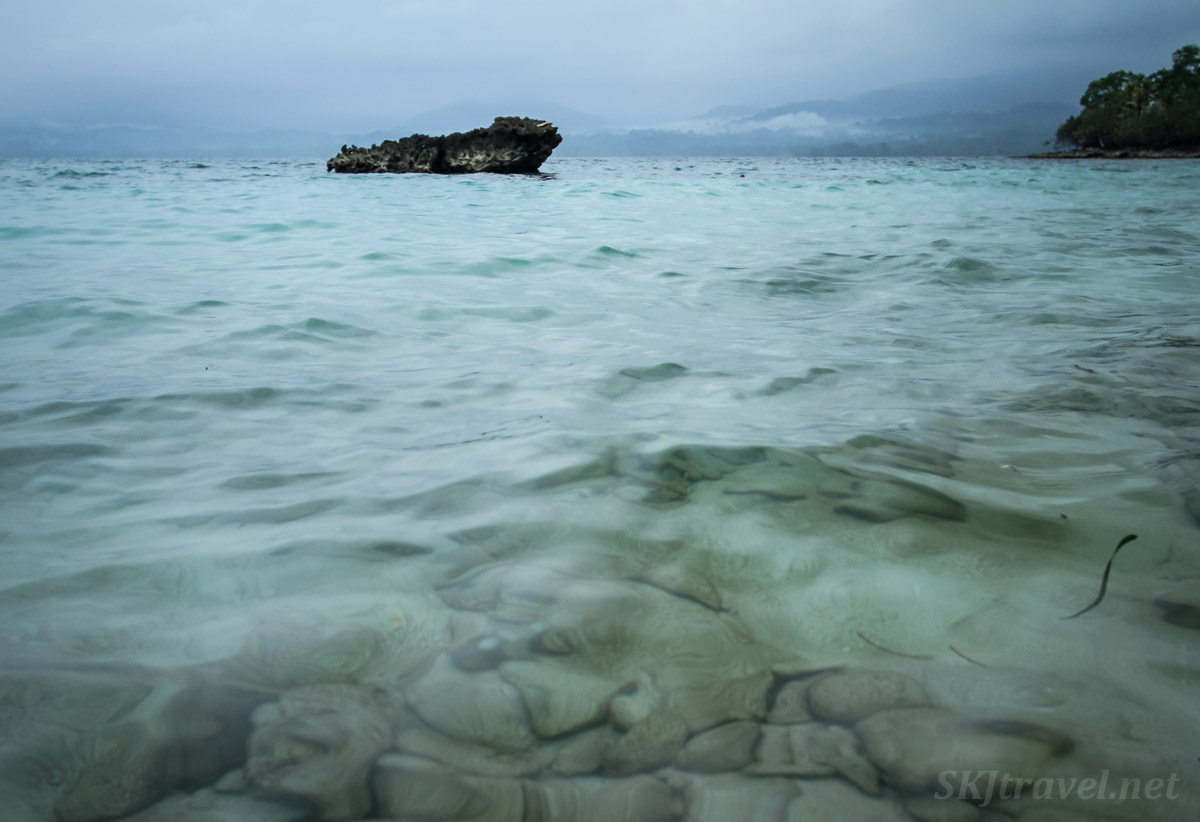 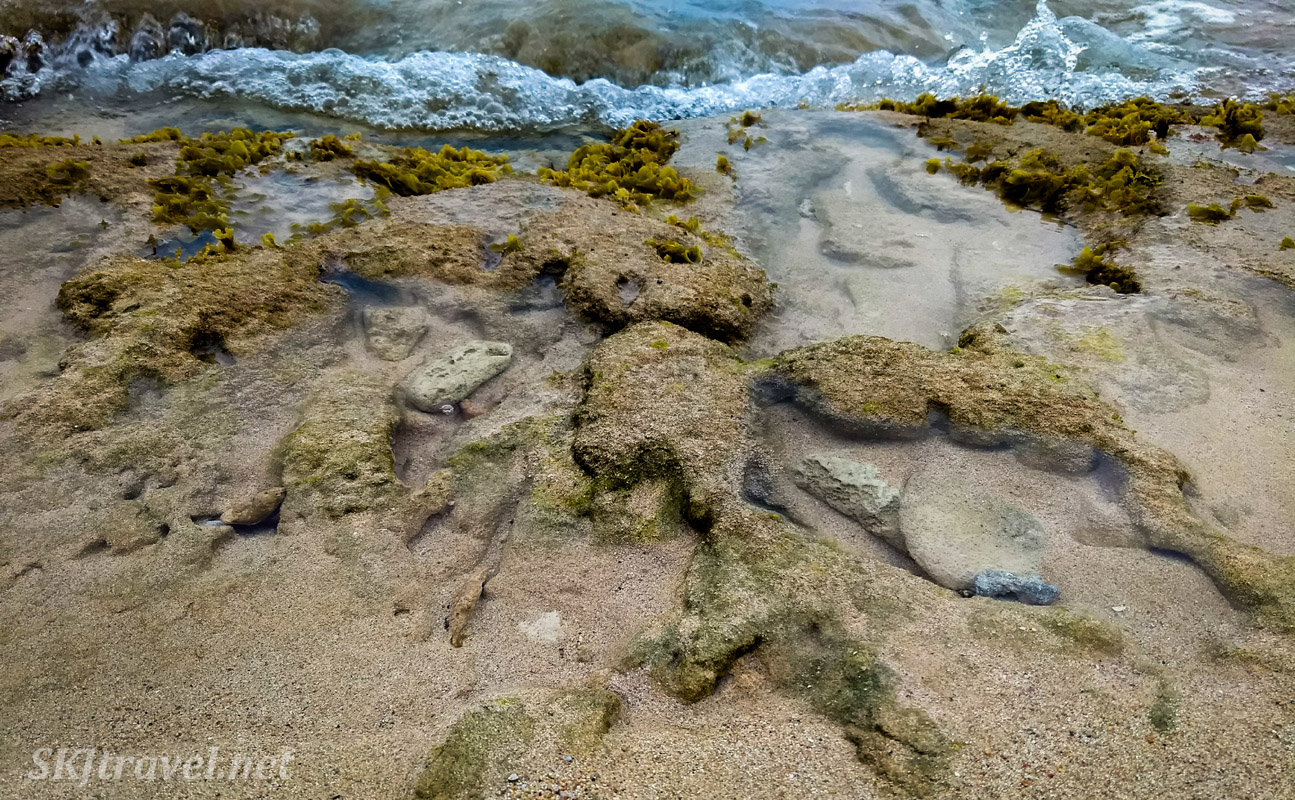 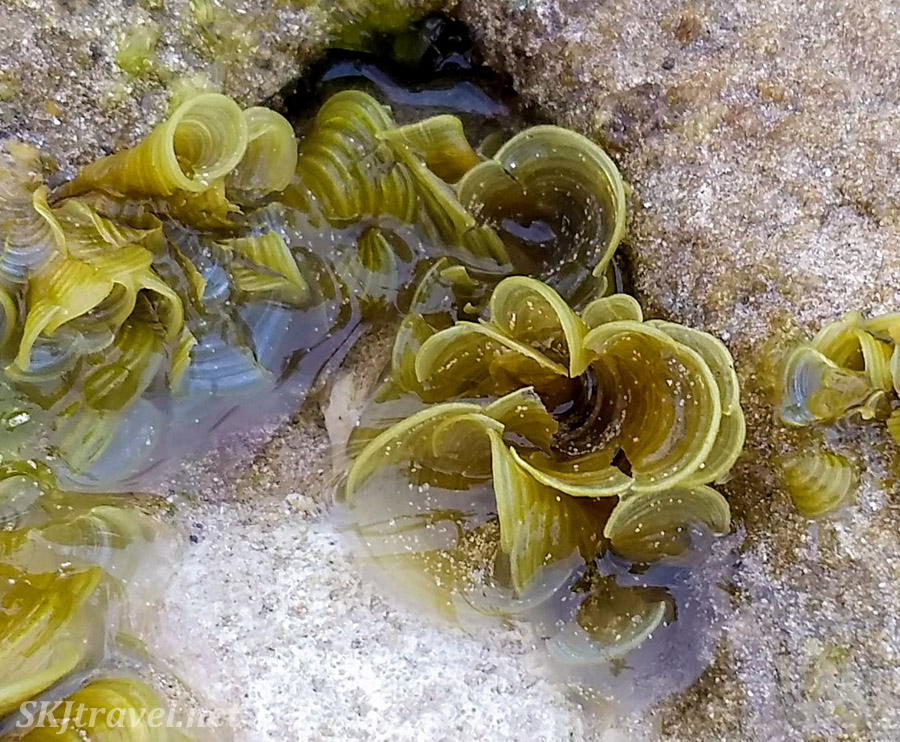 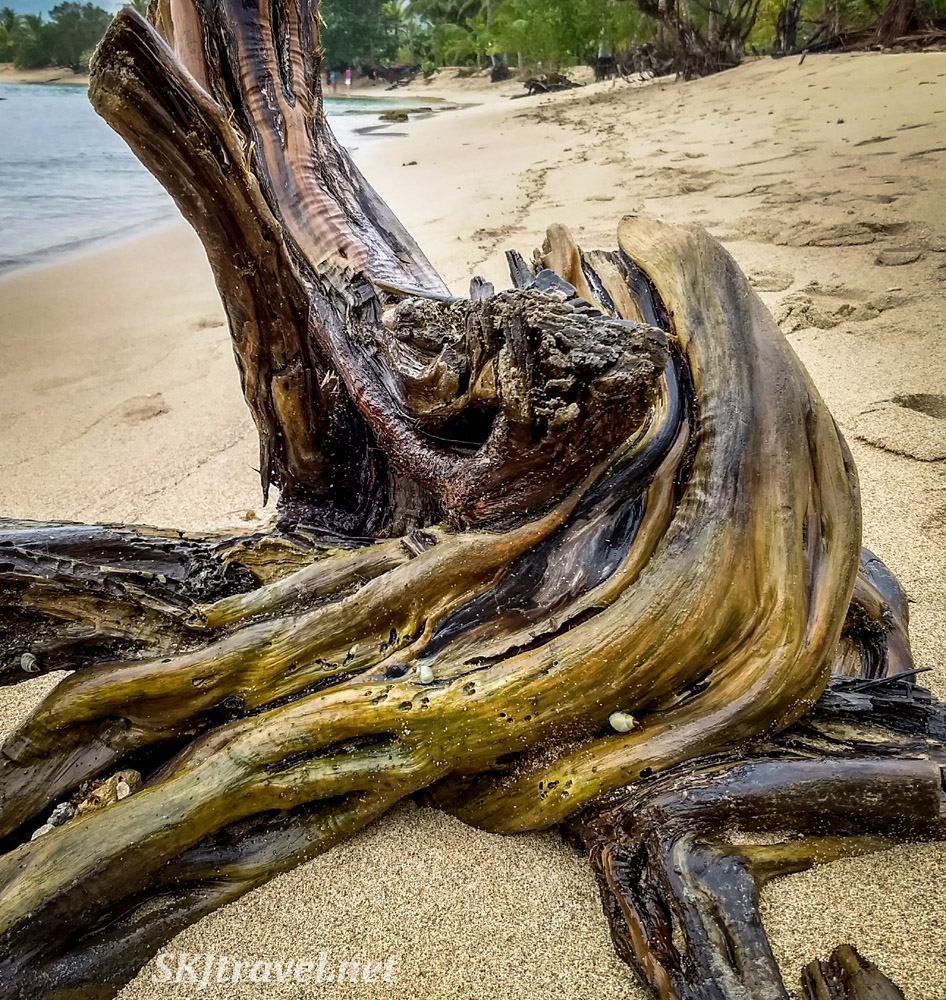 We traveled (by boat) down the coast from Armila to a small tourist town, La Miel, pretty much on the border with Colombia. An unexpected sight was a large boxy building that was a duty-free shop. It sold a lot of beach-oriented items, clothes, lotions, toys, etc. and of interest to some of our crew: wine! I personally didn't buy some, but others generously shared their loot with me back at our hut in Armila. This was also our first contact with other beers besides the one in Armila. So, I pretty much had to try them all. Cold drink in hot weather, perfect ocean temperature and gently undulating water to float on your back in ... really hard to beat. Even motivated me to a few selfies. 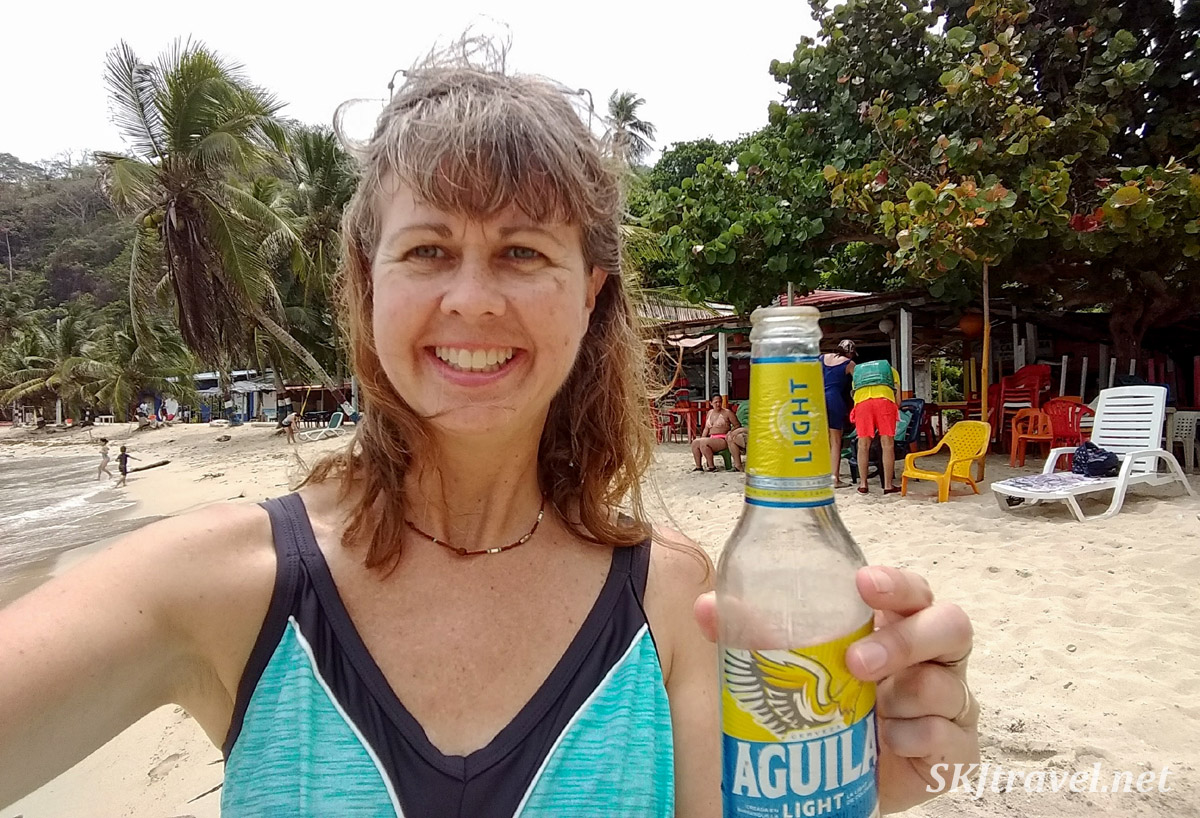 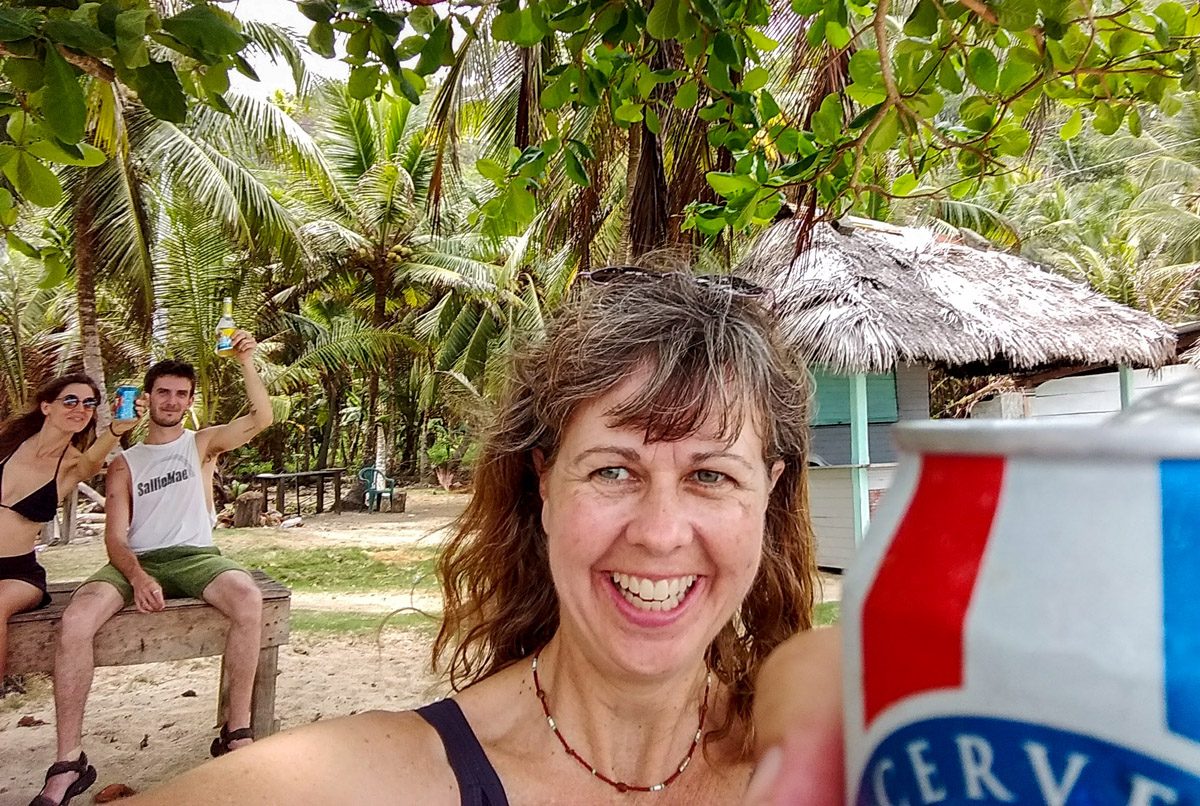 So we climbed up a huge number of stairs to the border at the top of a hill and back down the hill into the Colombian tourist town of Sapzurro. 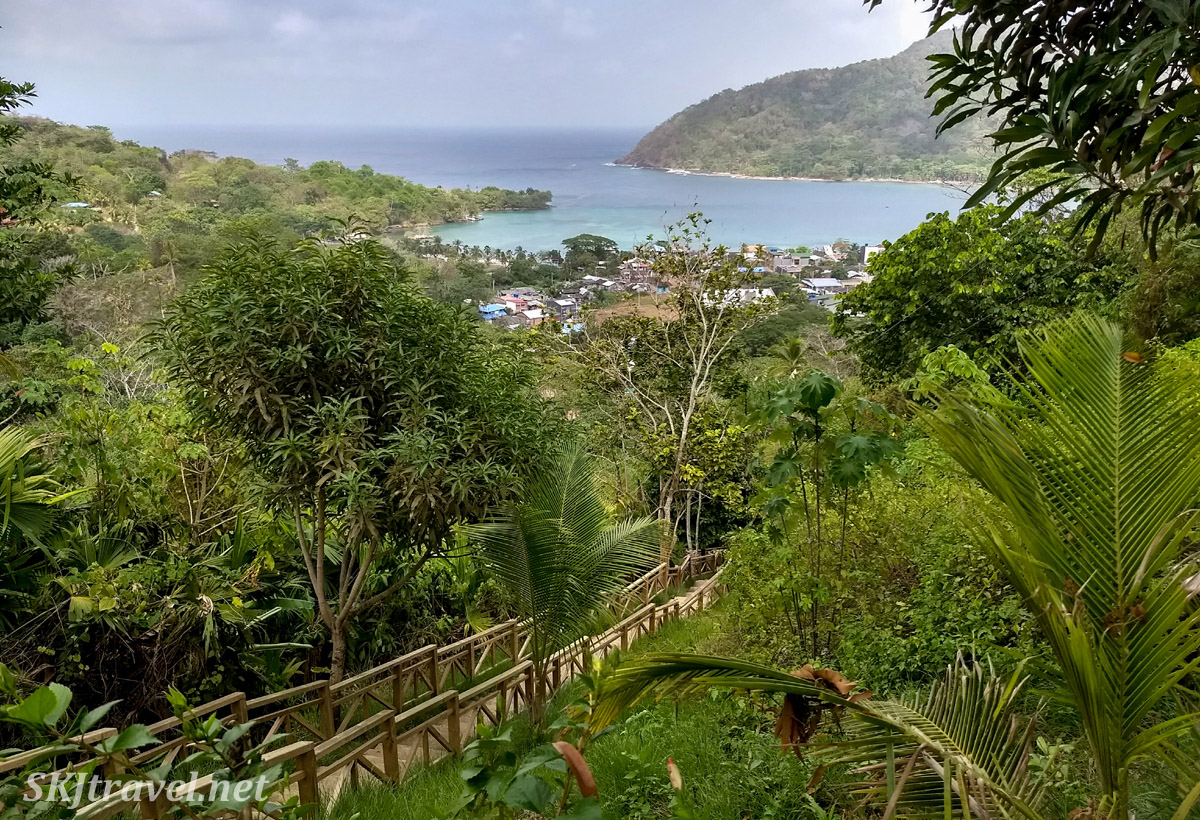 On the coast of a lovely bay, there were many bars and stores and hostels. A far different atmosphere from the Guna Yala villages just a short distance away on the other side of the hill. The very best thing I purchased in this town was a super cold bottle of water. Super cold is not something you get in Armila. It was absolutely delightfully divine. 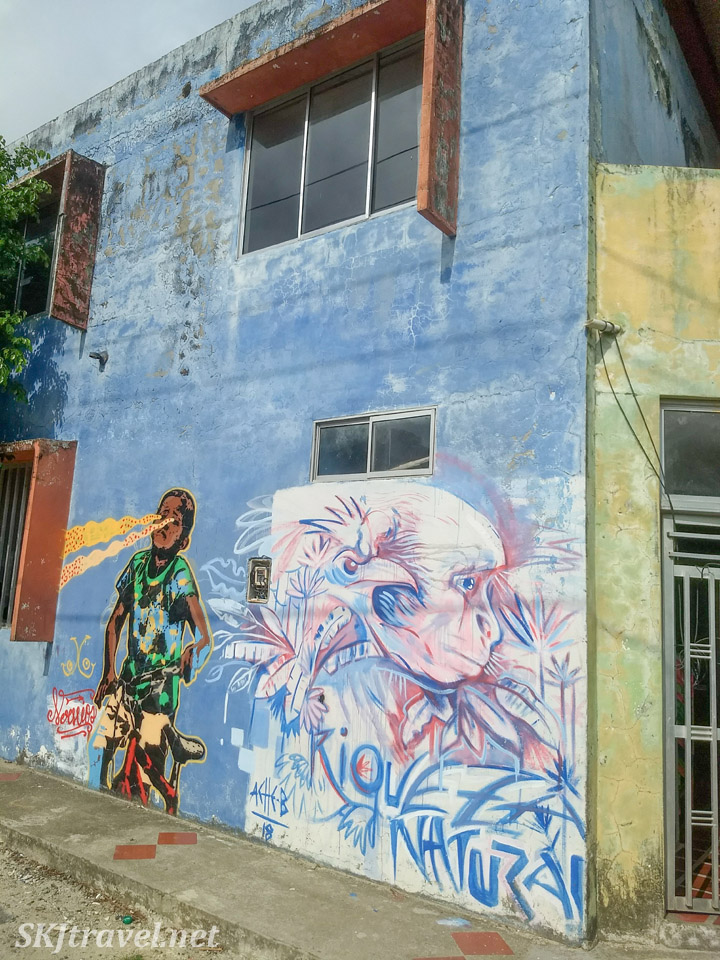 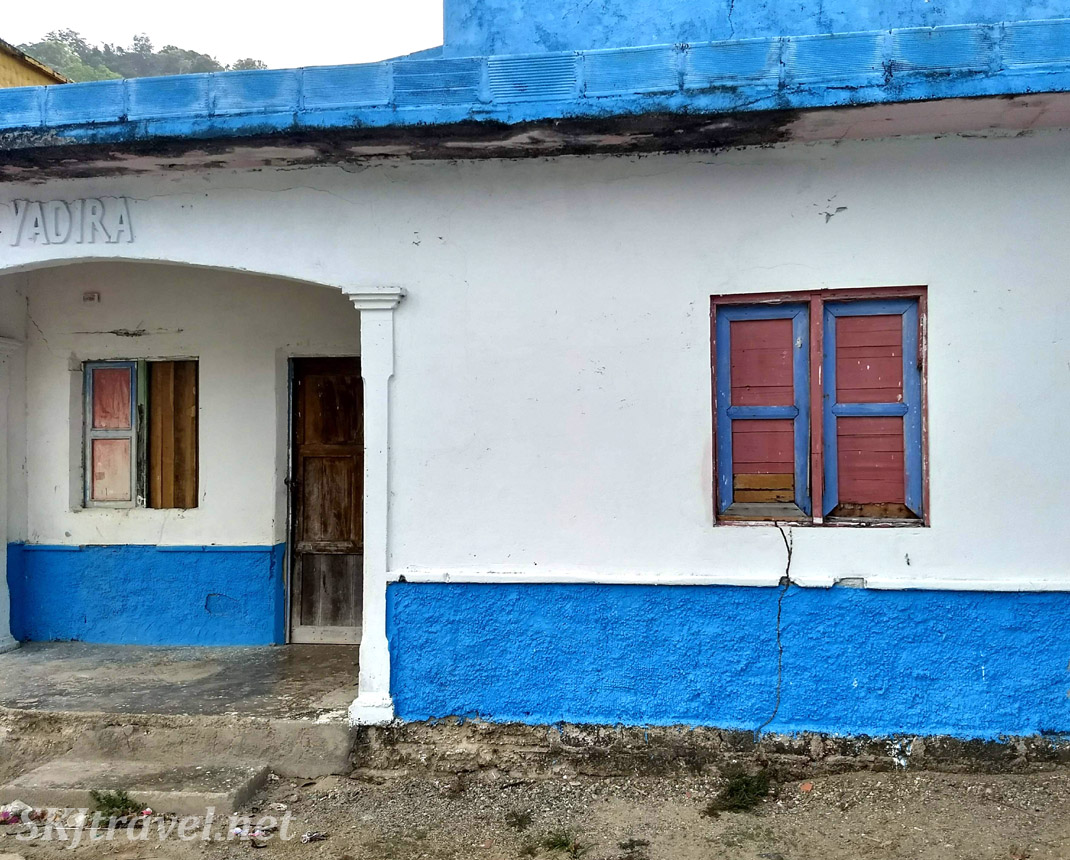 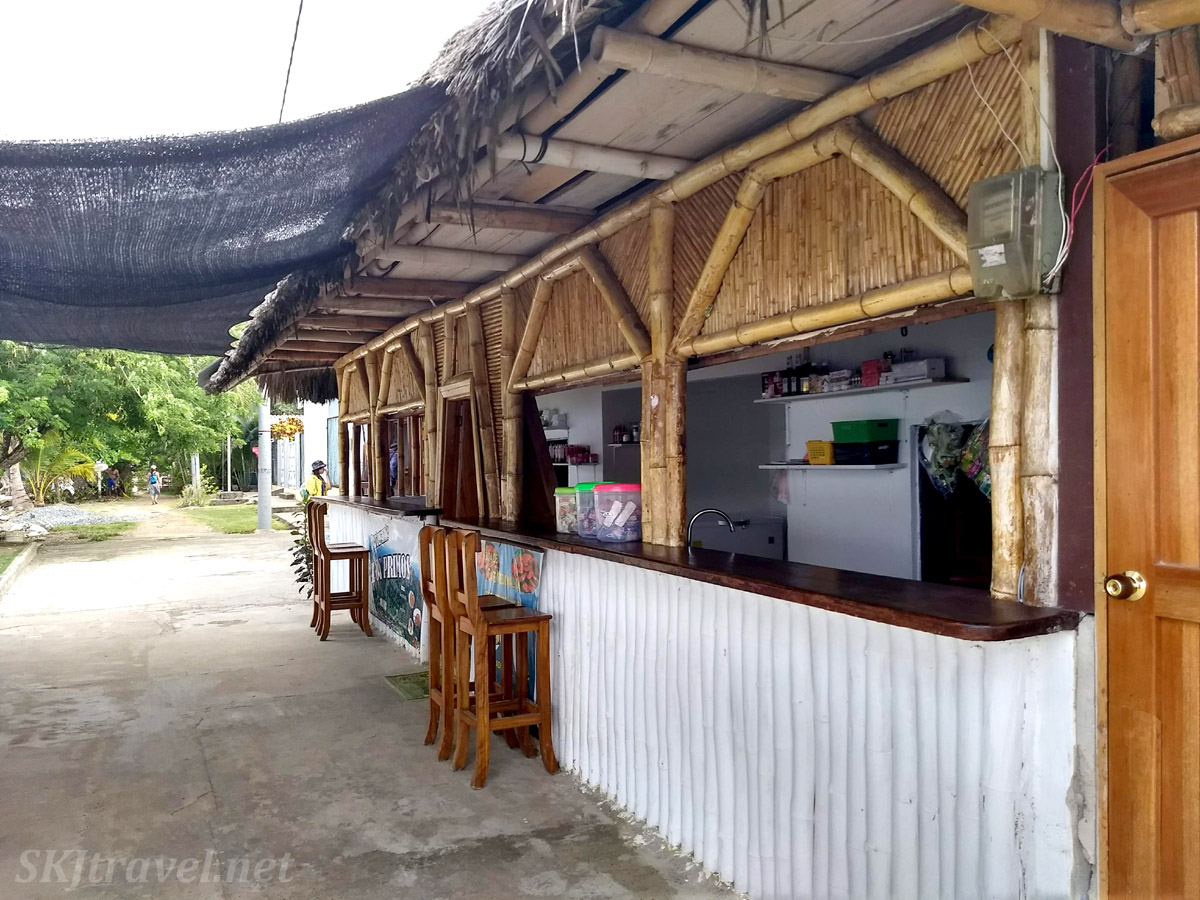 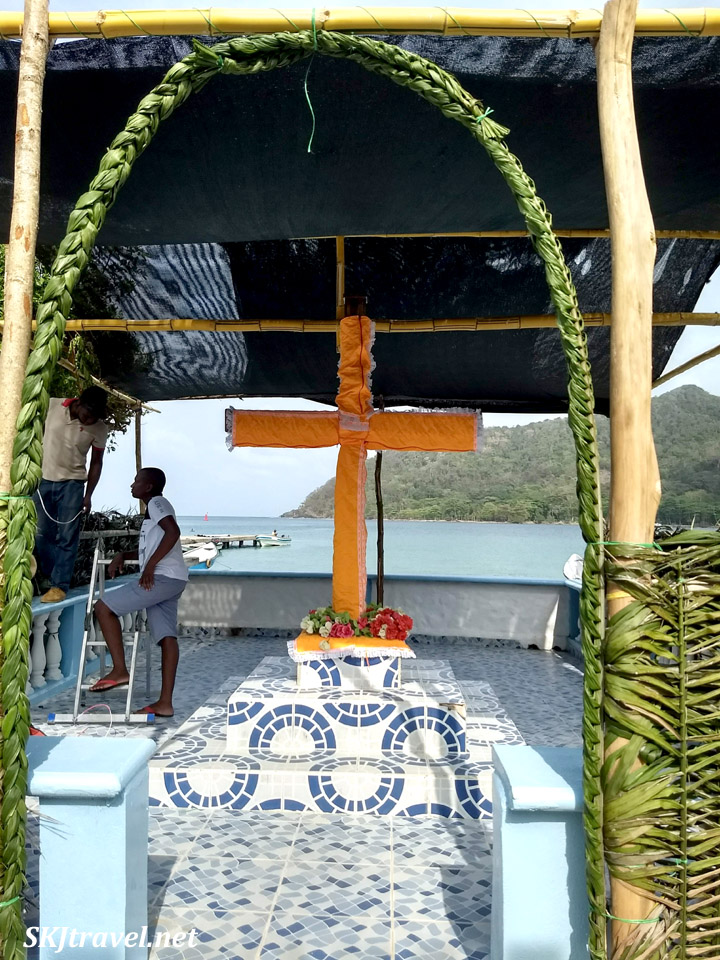 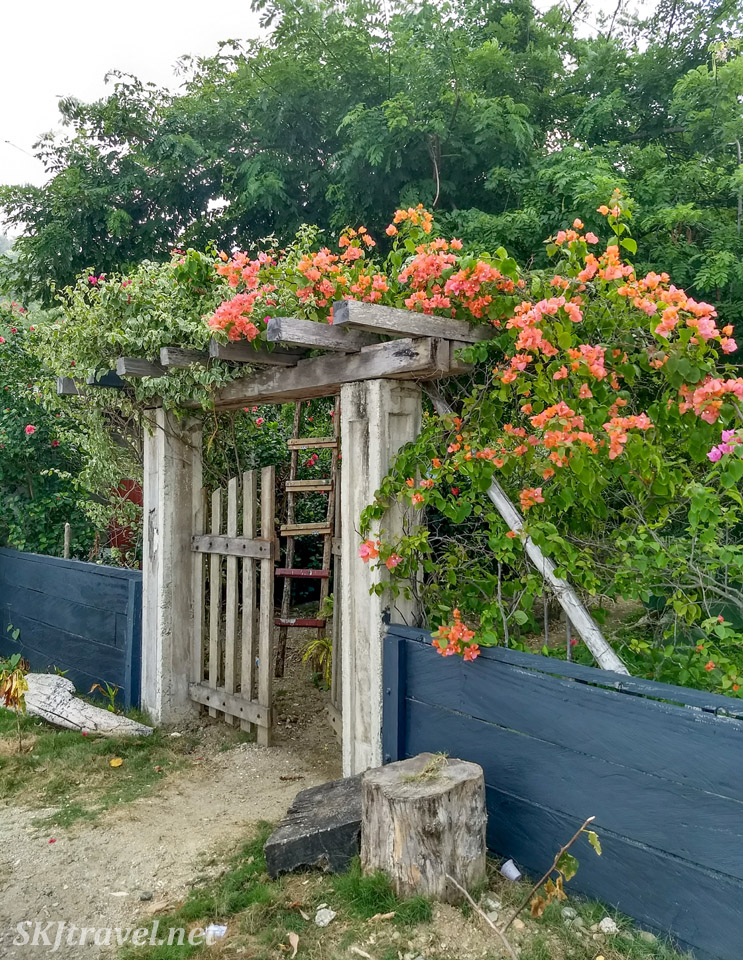 And so this wraps up the summary of my time in my 3-week artist residency in Armila. See the archive to learn all about Armila. I enjoyed these daytrips to see more of what surrounds Armila, and it helps confirm the reality of this slice of the planet, its serene beauty and bounty blessings in ocean and jungle: a special place indeed.